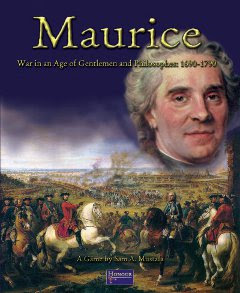 A few weeks ago Steve M and I got together again for an evening of 'Maurice' fun continuing where we left off in our first game in January, playing with the AWI collection and messing about with brigade commanders.

This time we allocated 'Notable' cards to a couple of them, one on each side to see how the command attributes that notables bring could be used with our new level of command.


The scenario Steve chose to set up with was based on a game I ran at the DWG back in 2015 based on a scenario from the board game 'Hold the Line' recreating the Battle of Long Island.

You can find the details of the orders of battle and set up on the link below to the club blog.


As you will see the forward American line is pushed forward onto a commanding ridge in front of the American embarkation point and they are tasked with delaying the formidable British force long enough to allow that embarkation to be successful.


Sad to say, I, commanding the Americans, made the cardinal error of order/counter-order and the inevitable confusion that created by neither defending forward on the ridge and gaining the benefits of it in the subsequent combat and leaving my pull out too late that I was locked into a rolling fight going backwards with little opportunity to break off.


Steve to his credit never let me recover from the error and although burning through his cards often leaving him with just two or three in his hand at a time continued to apply the pressure as the American line fell back.


At the completion of the first deck the Americans had lost three of their conscript battalions and managed to destroy one British unit in return but the Rebel morale card was in a desperate state as my line recoiled back in front of the defences.


Eventually the US troops found themselves trying to get units into the defences whilst forced to leave a rearguard which succumbed to the pressure of the British assaults and broke the army morale.


This scenario demands a robust stand by the Americans if they are to make a game of it and even then it is a tough one for the Americans to win, but the challenge of trying to bleed the British force makes it a compelling set up.

That said Steve played a great hand and never let the pressure up once in the driving seat.

Despite getting my rear end handed to me I really enjoyed the fun of managing a desperate situation that had me 'fire-fighting' all through the evening.

The notable card effects didn't really come into play although the brigade command system played its part when we had brigades split apart when units were destroyed which interfered with the Americans pulling out formations in one group which I think replicated the difficulty of retreat in the face of the enemy quite well.

Thanks to Steve for hosting our game and nice to give his new Tiny Wargames mat its first blooding.