With restrictions on movement in the UK gradually relaxing with all the possible implications that might have in terms of the control of the pandemic, the opportunity to explore the countryside to get a bit of physical exercise away from home is opening up and Carolyn and I took advantage of the new rules to take a trip out to Dartmoor to walk and visit some of its many neolithic monuments, many of which we have not seen before.
The area we went to is close to Burrator Reservoir, a large lake built above Plymouth in the centre of a series of connecting valleys, or combes as we call them in Devon, in the late 19th century to provide fresh water for the city and near abouts.
Dartmoor National Park is a natural moorland upland slap bang in the middle of Devon, created during the ice age which left this granite based moor covered in rocky outcrops or tors and amazingly balanced stones left on top of them when the ice receded.
This ancient landscape is covered with neolithic, bronze age and iron age settlements and monuments which reminds the visitor of the distant history of the land with its many ruins in the landscape, so beloved of Tolkein in his Middle Earth fantasy which is so easy to imagine in this part of the world.
I had discovered several recommended walks in the area, but decided to opt for a relatively short jaunt, just 3.5 miles, although the walk would feel more than that with a lot of off road and track hiking and up-hill, down-dale effort to get around the central key feature of Down Tor at one end of the reservoir, with several hut circles and settlements near to and on the way to the stone row itself.
The other reason for my choice was to use my ViewRanger app on the phone for which I had downloaded the OS 1:25000 Explorer Map of Dartmoor and on which I had plotted our walk the night before and which would allow me an opportunity to try it out in this way.
I have used this app in Spain last year for our Peninsular War battlefield tour and the previous year walking Offas Dyke with Mr Steve, but hadn't yet tried it with a pre-set route that I had plotted to follow.
Back in the day, I used to use a compass and paper map, but in these days of sat-nav and the ability to carry all the information on your phone I am very happy to embrace the technology to help in planning longer and more interesting excursions
The first part of the walk had us following an old bridle path up from the car park and soon brought us to our first ancient buildings, namely the remains of the medieval Middleworth Farm with the old farmhouse looking rather forlorn covered in a velvet of local mosses and lichens. 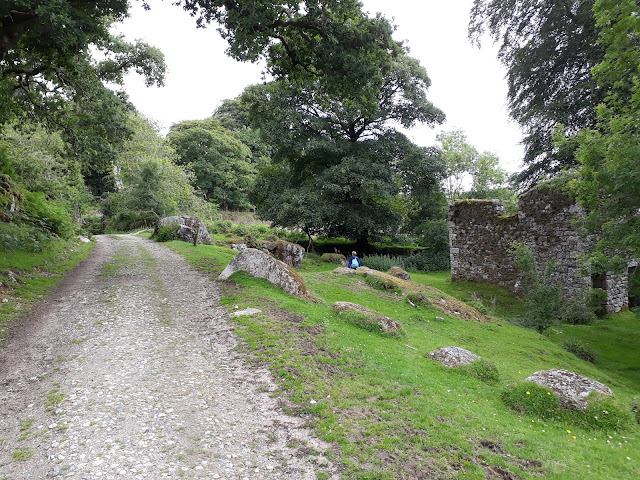 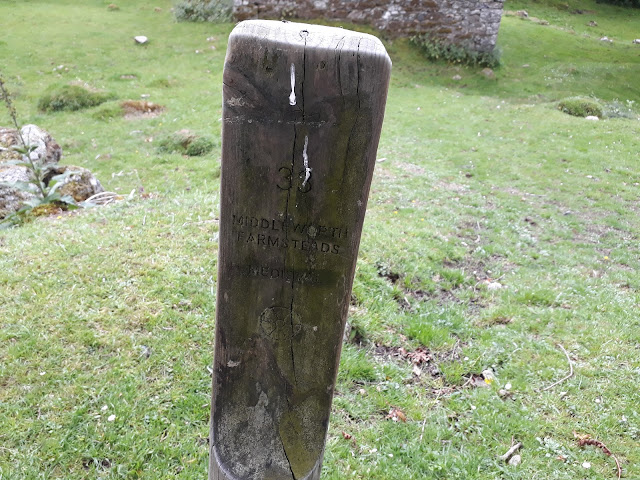 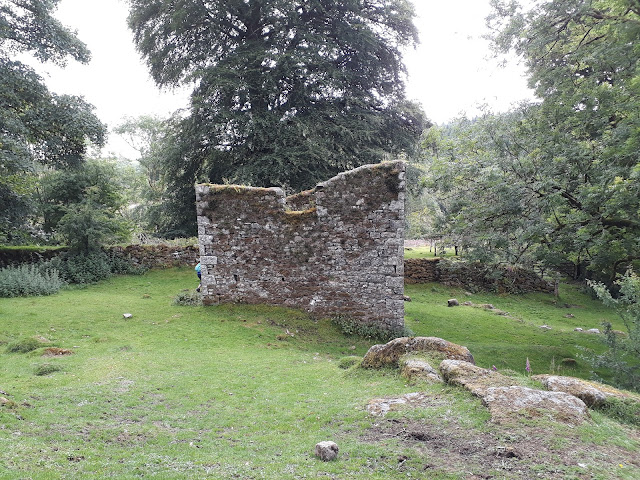 As we followed the valley of the Narrator Brook to our right, on our left the lower slopes of Down Tor presented indicating we were leaving the lower ground around the reservoir and climbing up on to the higher ground of the moorland above. 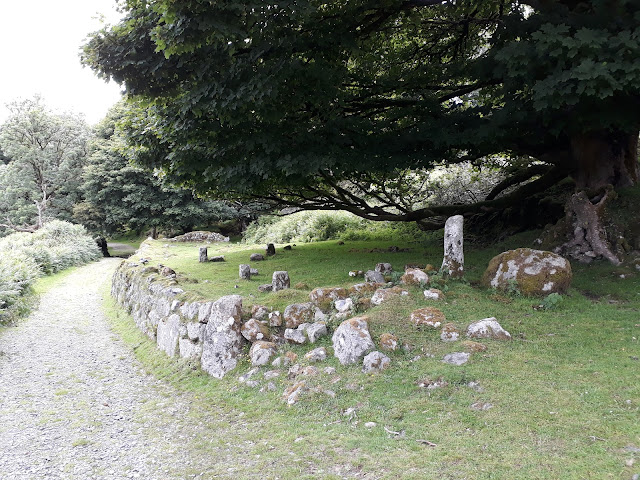 The ruins of Combeshead Farm indicated a larger range of buildings than its neighbour along the way, but no less robbed out of its valuable stonework. 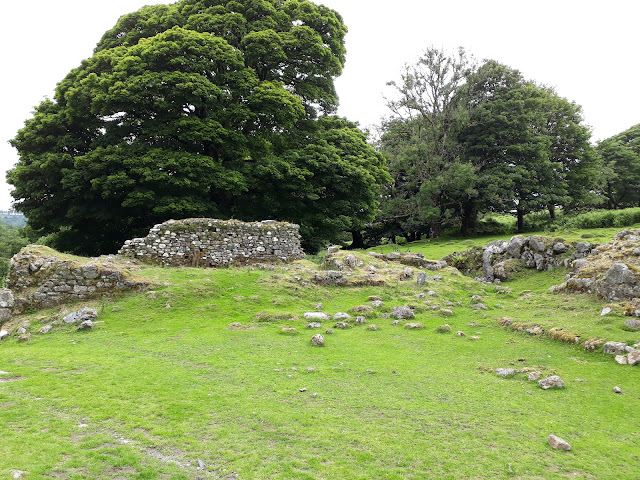 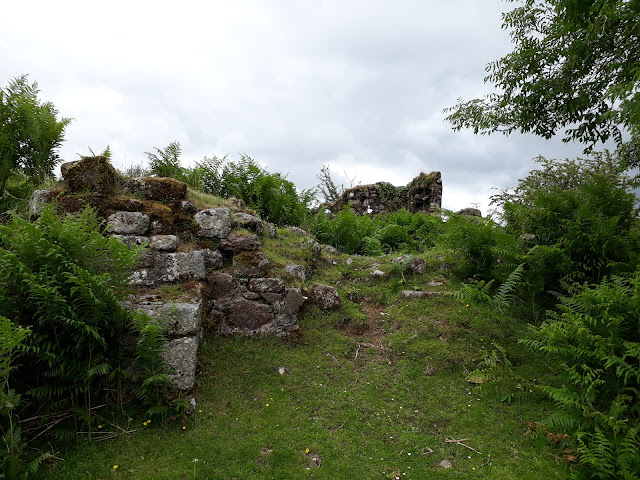 On leaving the ruins of the farm we were immediately struck by trees draped as they were in a wispy lichen that hung down from their branches as well as lacy looking clumps that adorned the lower branches. 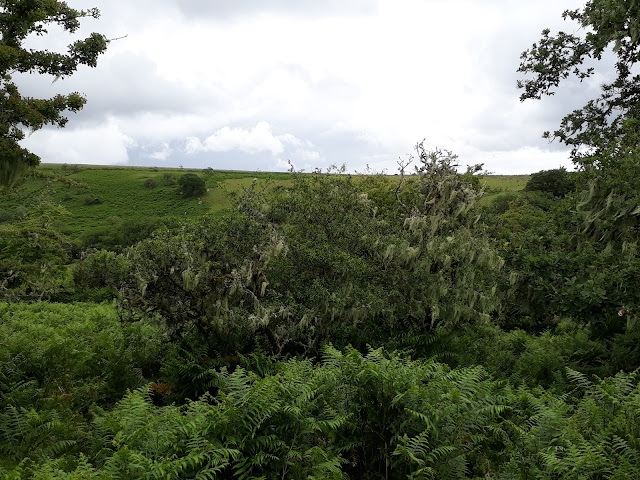 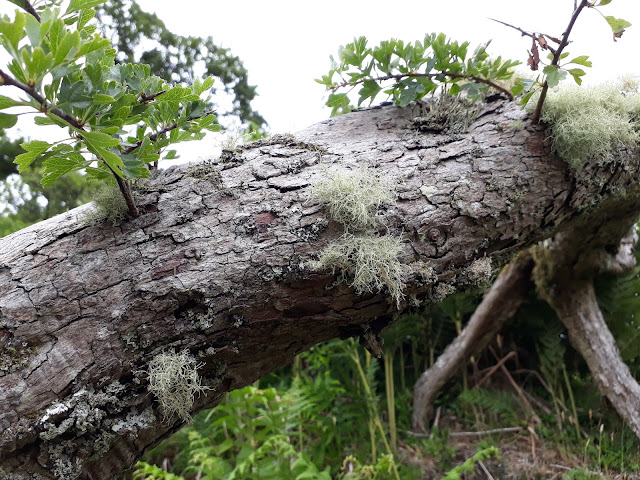 The trail climbed steadily and soon enough, Cuckoo Rock, a curiously shaped piece of granite on the highest point cut into it by two large horizontal gashes, not doubt carved out by wind rain and ice over the centuries, hove into view, with the ground before it covered in ferns and bushes.
On the climb up, the path became overgrown in ferns amid which we met some of the local residents, Dartmoor ponies, that wander free on the moor and together with their Welsh counterparts are reminders of the Celtic ponies that puled the chariots and provided the mounted arm of the Britons who faced off against Caesar's and Claudius's legions.
The view from Cuckoo Rock from the way we came and our climb up to it to the the view out to Combshead Tor on our next part of the walk were truly stunning and made a perfect stop point to grab a drink and a quick snack before pressing on.
I really enjoy the challenge of finding my way around in open country and identifying specific landmarks to navigate by, ever since I got lost learning to fly years ago on my pilots qualifying flight but went back to the basics of narrowing down my exact position based on known landmarks, to get back on track and pass my test.
Here I was just trying to find the stone row and found myself scanning the horizon from Combshead Tor and suddenly realise I had been looking at it for several minutes before it dawned on me exactly what I was looking at.
Its really amazing to think that this burial mound and stone monument was constructed somewhere between 4000 to 2500 BC possibly just into the bronze age and represents the work of some of the most ancient inhabitants of the British Isles, with the landscape very much as it would have been then. 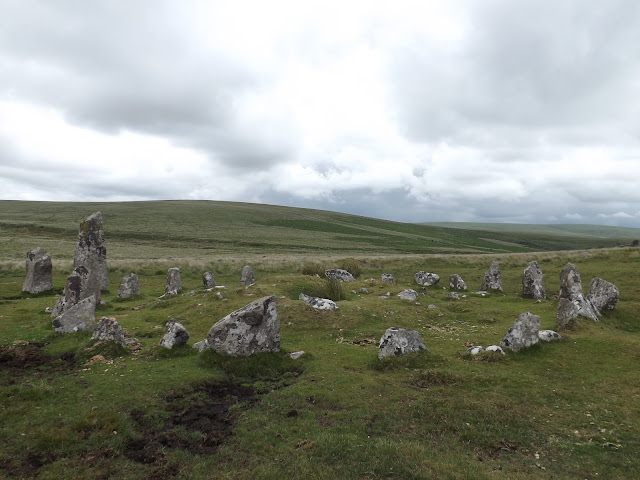 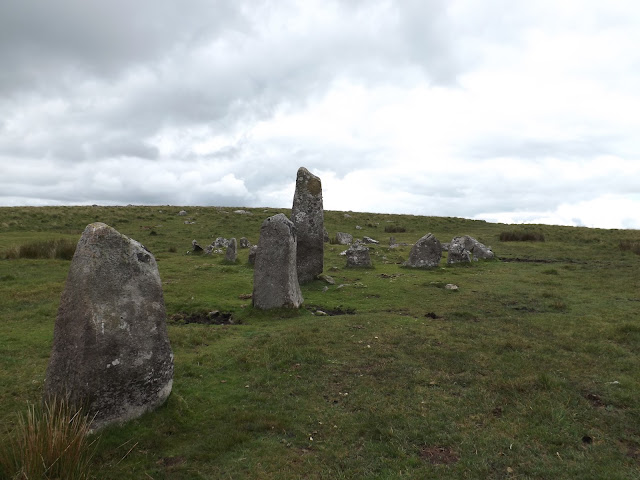 With the highlight of our walk found we headed back up hill to start the descent back down to Burrator Reservoir and the car park, with Down Tor ahead and to the right of our path but with a significant enclosed settlement to look at on our way down.
The high ground here is covered in granite boulders and made identifying the boundary of the enclosed settlement difficult at ground level.
With the settlement identified we pressed on down the slope, enjoying the copious amounts of fresh air and grateful for the threatening clouds holding off from unloading a shower before we were back to the car.
Dartmoor is a fantastic place to walk with lots of interesting places to visit and we had a great time exploring around Down Tor, which made such a nice excursion after our several weeks of lock down.
I am looking forward to getting back into more walking in the year and will share the adventures here on JJ's
For more information on the sites visited I have attached the following links:
http://www.dartmoorwalks.org.uk/resource/site.php?SiteID=206
https://www.megalithic.co.uk/article.php?sid=541
https://stonerows.wordpress.com/gazetteer/region/dartmoor/hingston-hill/
Next up, the crowds line the wharf to see the mighty 112-gun Santa Anna join the Spanish Squadron
Posted by carojon at 22:11 No comments: 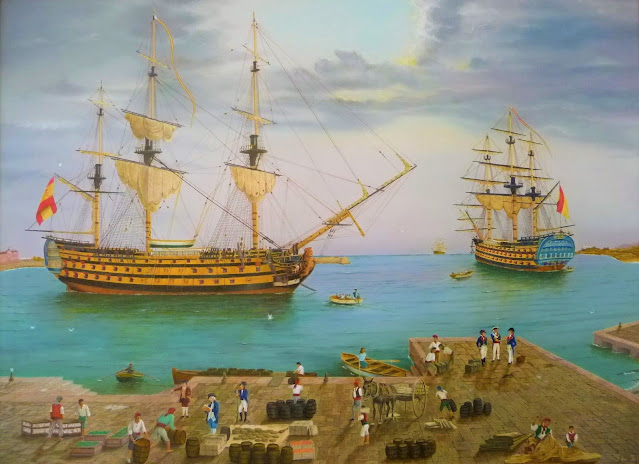 After a short break, painting and rigging a couple of ships for my friend Bob and featuring them in the recent series of rigging tutorial videos, work continues on my own collection of model ships and JJs Royal Shipyard carries on the work started with the launch of Santisima Trinidad to build my Armada Espanola.
As seen below, the core of the collection is to be built around the Warlord Spanish navy box set with my big three-decker to represent the 112-gun Santa Anna as featured at the head of this post.
The last week saw the hulls put together and primed in my normal light grey primer paint, with the various fittings such as masts, anchors and boats primed separately either on the sprues or, as you can see, held by clothes pegs in the case of metal parts.
I tend to paint these parts separately and then bring them together at the end thus leaving work on the hulls much easier to do without having to paint in between already affixed mast and boats.
As you will also see I am only concentrating on the rated ships at present and so this initial batch of models includes the three frigates, Diana, Ninfa and Ceres, the three third rates, Montanes, Neptuno and San Juan Nepomuceno and my first rate Santa Anna.
As always, these models give plenty of detail to work with and the opportunity to try and capture the look of the ships the models will represent, all be it that these are not historical replicas of the originals and were not designed to be, but instead wargaming models that to my eye really capture the look of the ships of this period and will grace any table when gathered for battle.
With those caveats in mind painting and modelling these kits has to acknowledge those variations from the actual historical ship, such as the occasional variation of figurehead and the over accentuated name plates, below stern galleries.
I personally like the way Warlord have designed these models to be easy on the eye and very functional wargaming models and with a carefully applied paint job can be made to look the part which a full set of rigging will do.
So this week will be spent fitting these models out with their rigs and then I will start work on my three Spanish third rates of renown, Monarca, Argonauta and San Justo, thanks to Robin at Warlord Games who sorted out my particular box not having its metal deck and figurehead/gallery parts.
Following those I will return back to the similar boxes for the Royal Navy box with HMS Bellerophon, Revenge and Tonnant and the French box, Indomptable, Formidable and Argonaute.
Once these models are finished it might be time to do a bit of a fleet review.
So lots of work in the dockyard to look forward to, alongside more book reviews and game reports and perhaps a bit of outside reporting on a little local waking trip Carolyn and I have planned.
Posted by carojon at 10:21 5 comments: 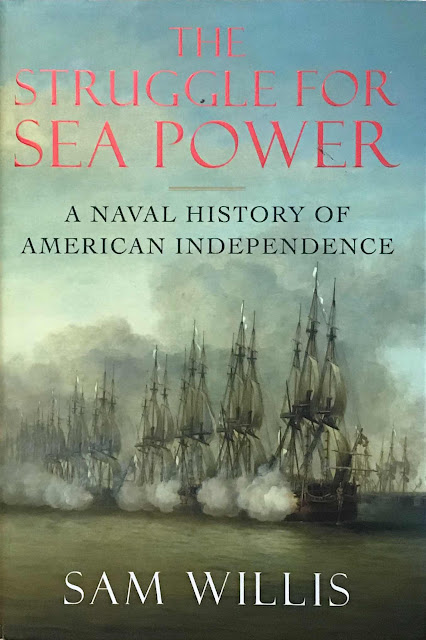