PAW 2020 - Presented by the Plymouth Association of Wargamers


Yesterday I spent a very pleasant day travelling down to Plymouth in the company of Vince and Bob to revisit a show I hadn't attended for five years, namely PAW, presented by our neighbouring club, the Plymouth Association of Wargamers, based in the second city in Devon forty miles down the road from the more famous County town and City of Exeter - only kidding chaps.

The re-sparked interest in seeing the Plymouth show arose from chatting to several new members of the DWG who are Plymouth members as well and who suggested we might like to come down and see what was happening.

These local shows are a great time not only checking out games, picking up stuff from the traders but also an opportunity to 'shoot the breeze' with other local wargamers who I have met and chatted to over the years but who tend to attend other groups and clubs and so really only meet at occasions like this.

However with the recent growth in membership of the DWG in recent times, it felt like being at our own show at times bumping into other chaps from club who had also popped down to Plymouth to see what was on.

I wasn't really looking to get much in the way of purchases myself having recently added to the ship collection and with several vessels on the slip way in the JJ's Wargames Royal Dockyard, but ended up picking up HMS Royal Sovereign and some paint.


Not only that but Colin Farrant from Charlie Foxtrot Models happened to have a copy of  Naval Warfare in the Age of Sail by Bernard Ireland that he was looking to re-home and very kindly let me have it, given my current focus, all things age of sail. Thanks Colin that was very kind and very much appreciated.

I have posted a bit of an update on my current projects at the end of this post.

So as usual in no particular order I present some pictures of the games that caught my eye from the day: 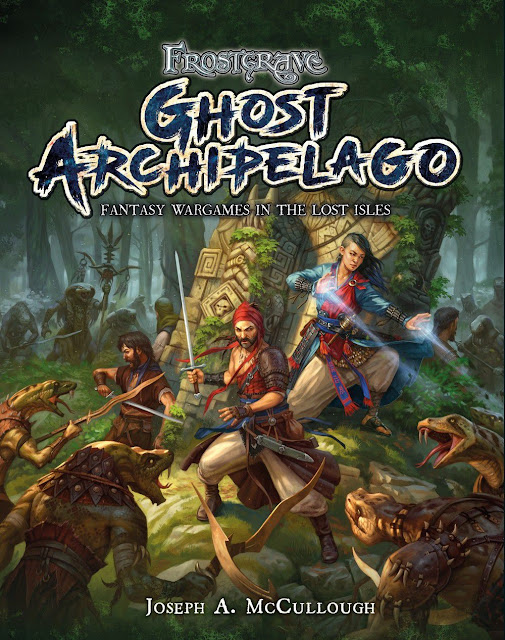 Fellow Exmouth wargamer Taff and a few of his friends staged this glorious fantasy treat of a game using Ghost Archipelago from the Osprey Frostgrave stable of rules and books. 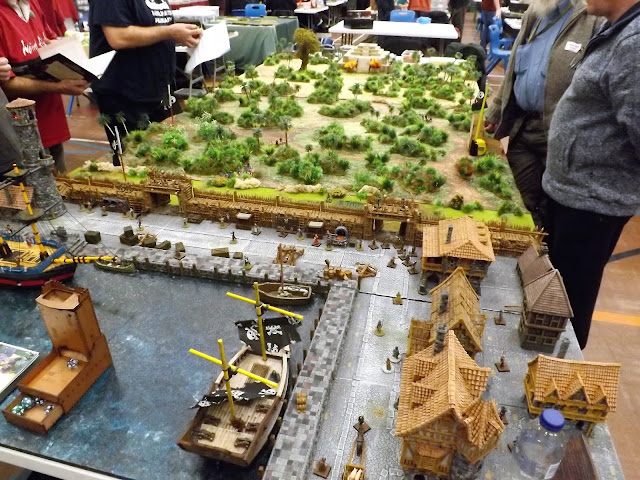 What particularly caught my eye with this game was the harbour, and buildings together with its protective town wall, with the latter being 3D printed and really setting off the look of the whole table, not to mention the fire breathing temple platform at the other end. 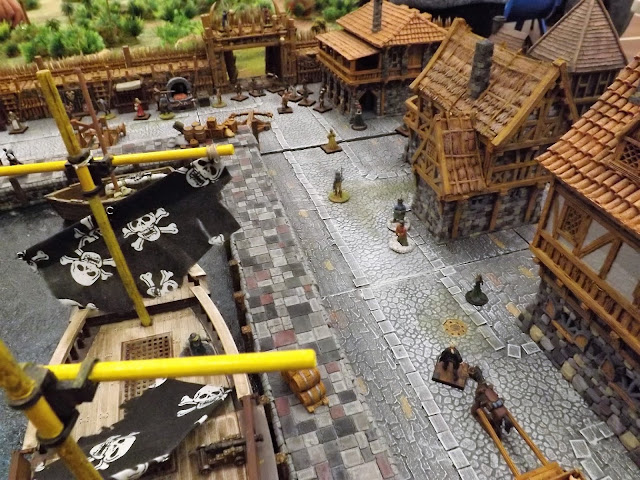 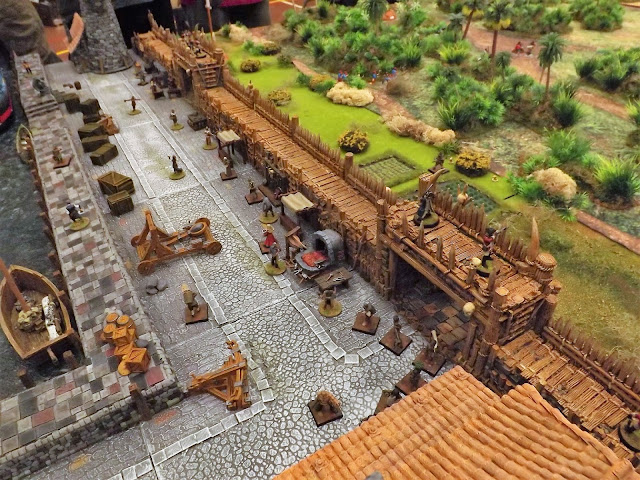 Great fun and a treat for the eye, and some examples of great modelling to capture a particular theme.

I know nothing about these rules other than their existence and am very unlikely to ever play a game like this, but I did enjoy watching the play and taking some time to get these pictures. 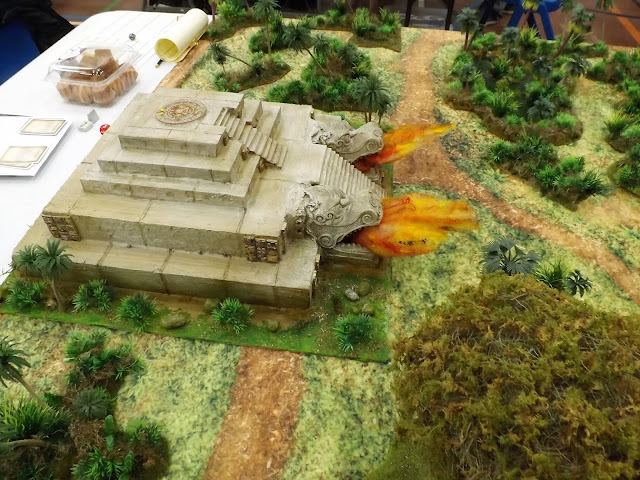 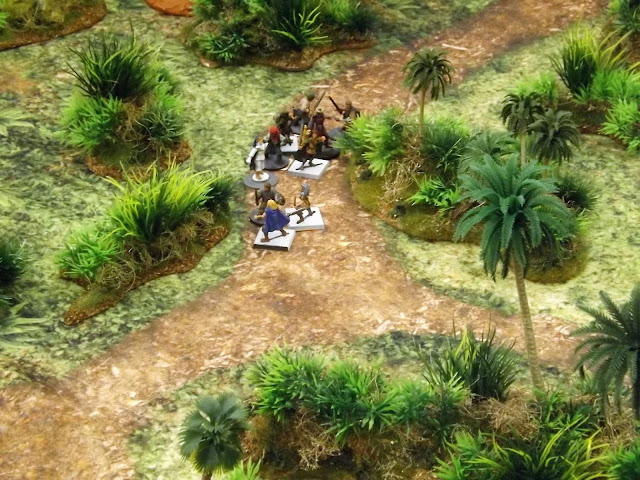 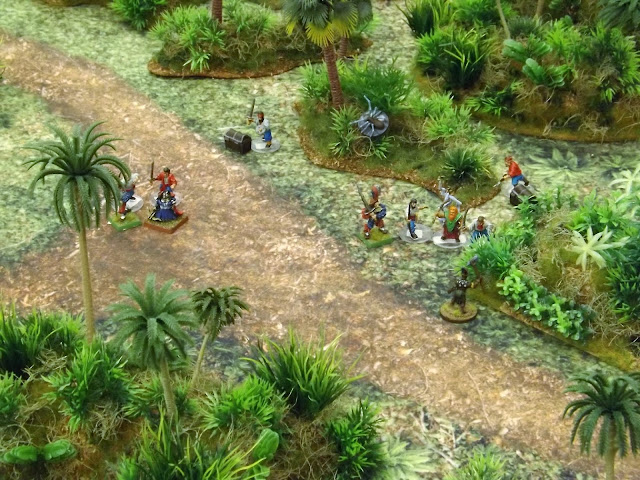 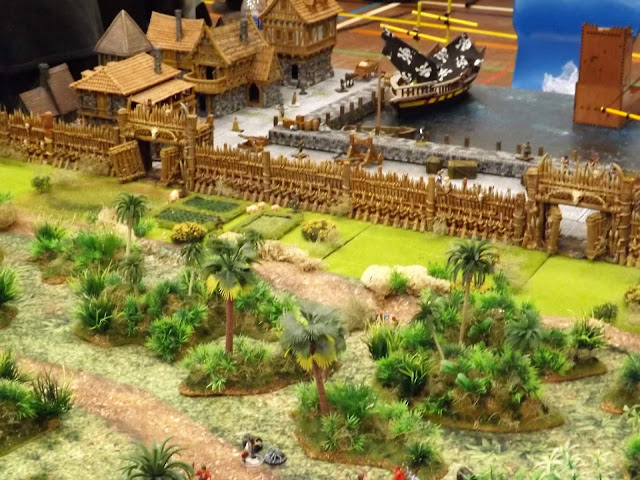 
Slightly more towards the historical theme, but with a period that has never really captured my imagination was this Samurai set piece using the Test of Honour rules.

John now joins us at the DWG and has regularly brought Test of Honour along as a stand by game should we need it for a club meet to cater for excess numbers.

Thus it was I joined John and some of the other chaps from club to finally get to play this game, and I have to say that I was really impressed with the mechanics and fun the game created as we moved characters and small groups of figures around on the stylised play mat seen in the pictures looking to dominate key objectives within the five turn scenario being played. 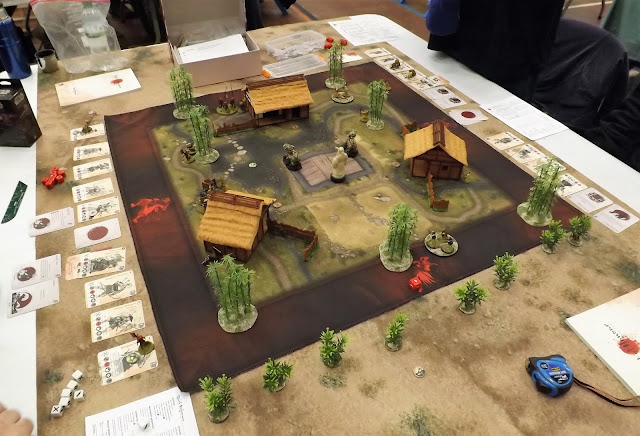 With some nicely turned out models and terrain pieces the game play is further enhanced to give a very thematic game that had me imagining scenes from Seven Samurai. 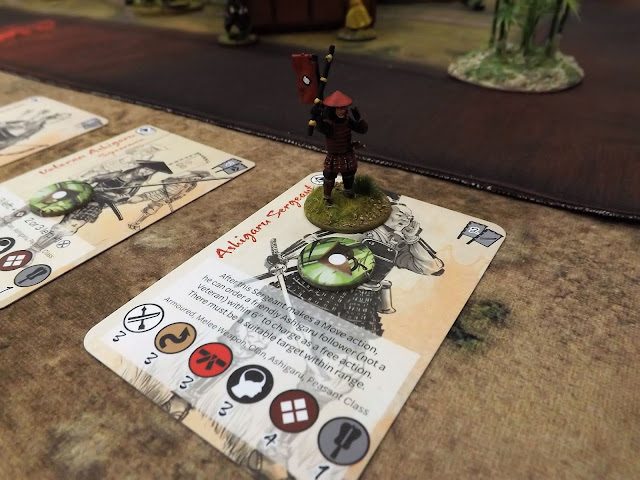 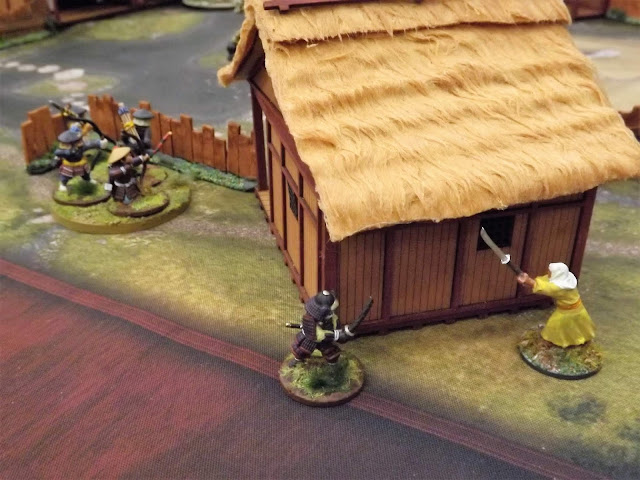 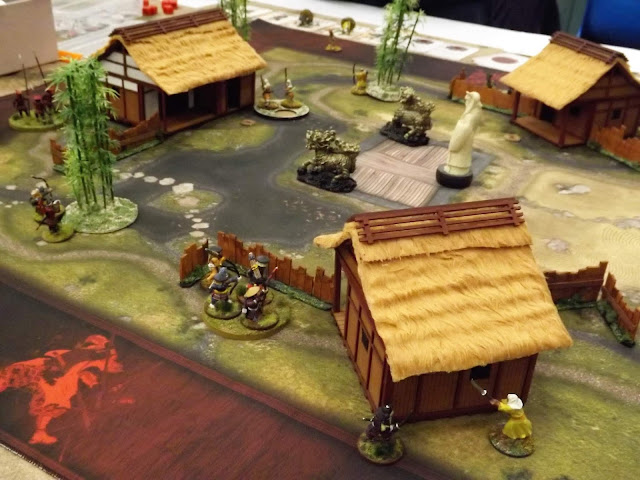 Another nicely turned out game and in a period that is always likely to grab my eye was this Command and Colours game produced with figures and hex mat. 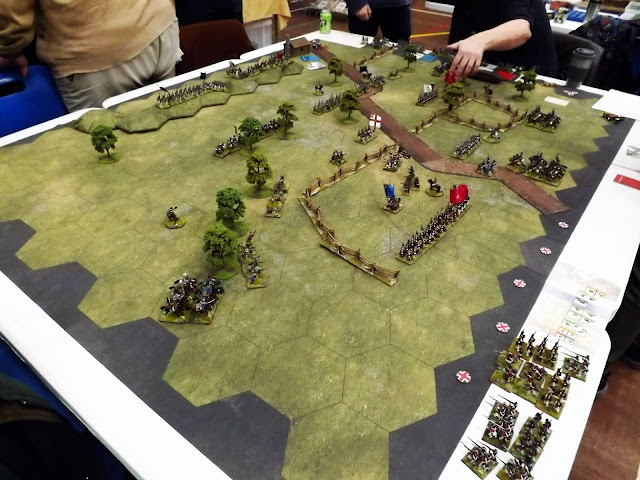 As you can see the individual units were nicely turned out together with terrain items that complimented the hex mat that did a very good job of turning the board game into a very attractive tabletop miniatures game. 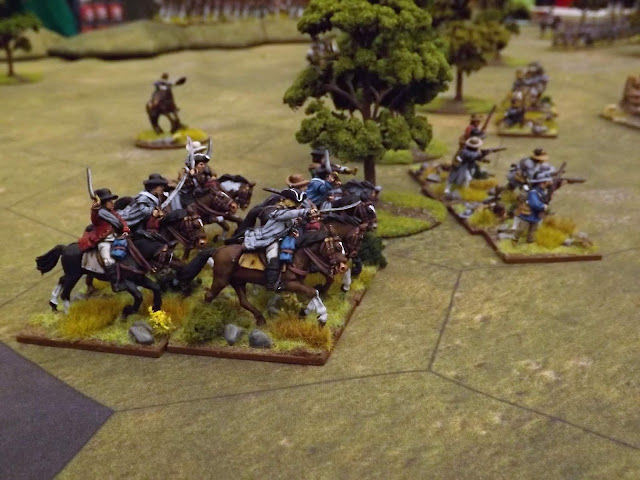 I can definitely see the attraction of this style of gaming and I was using hexagons to do these kind of battles long before GMT thought it might be a good idea, but have now returned to my roots with games not reliant on any zonal appearance and hopefully more aesthetic in its overall look. 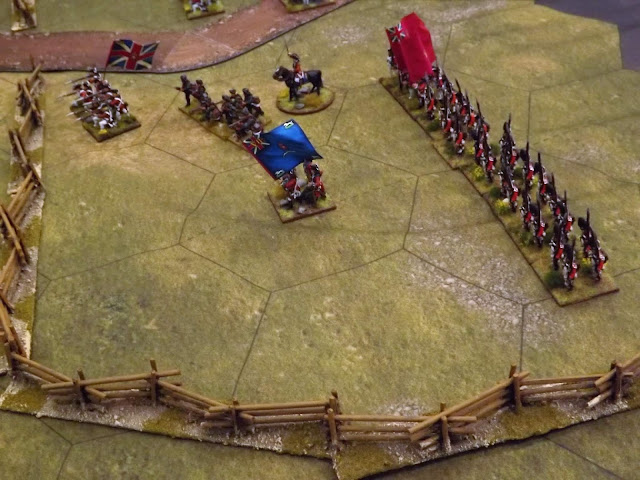 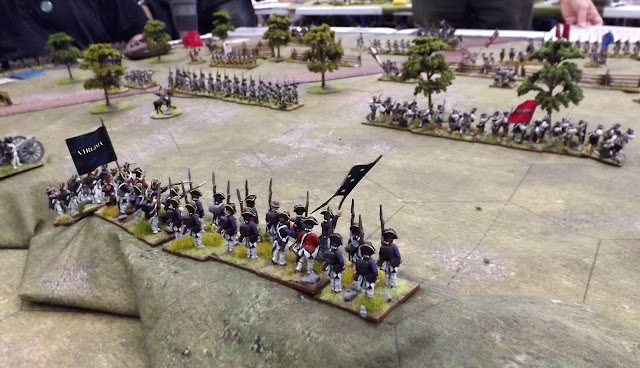 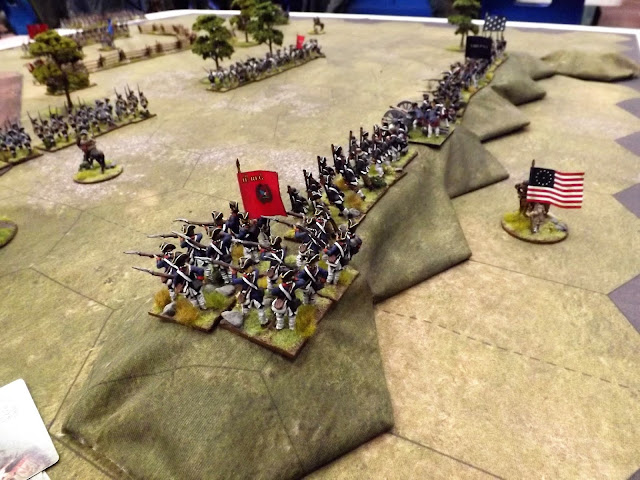 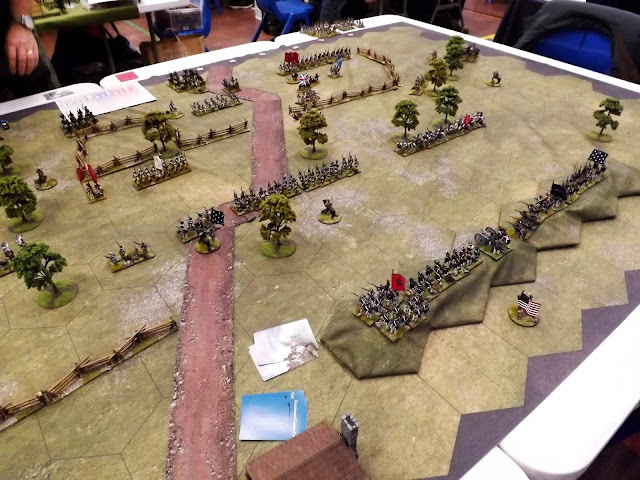 Talking of aesthetics in tabletop gaming, the following FIW game exemplifies perfectly the point, offering pictures of figures in their natural environment, almost as if you were on the banks of the Mohawk River itself, three hundred plus years ago. 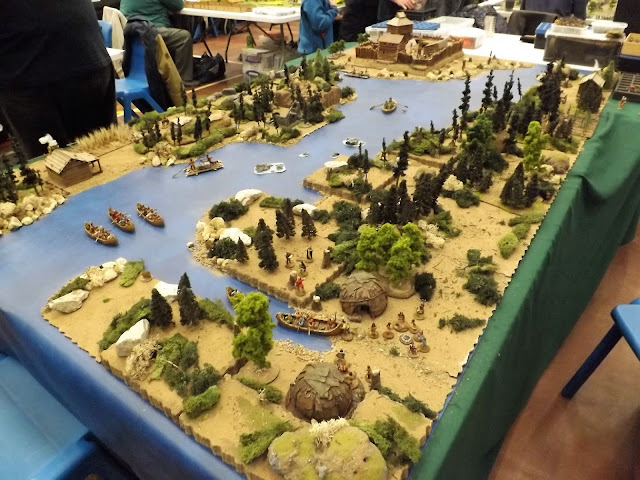 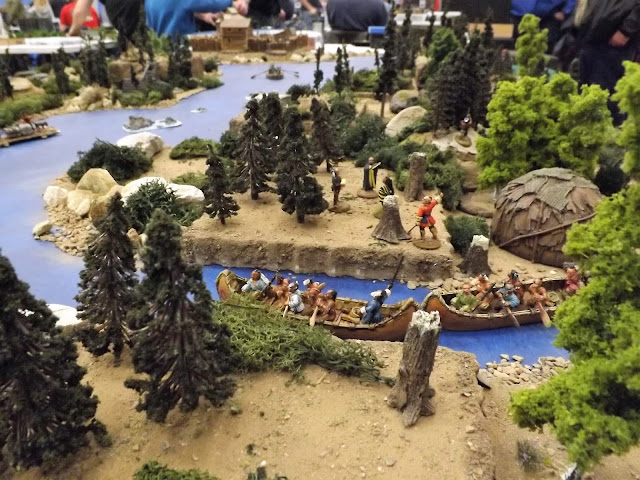 Some lovely modelling on show transporting the onlooker to scenes straight out of 'The Last of the Mohicans' - Very nicely done. 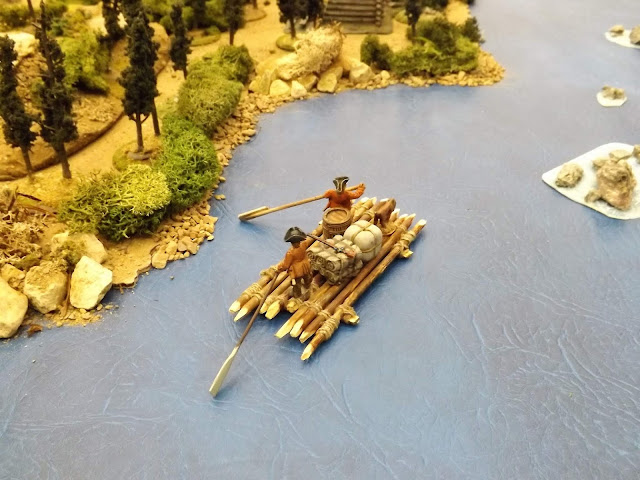 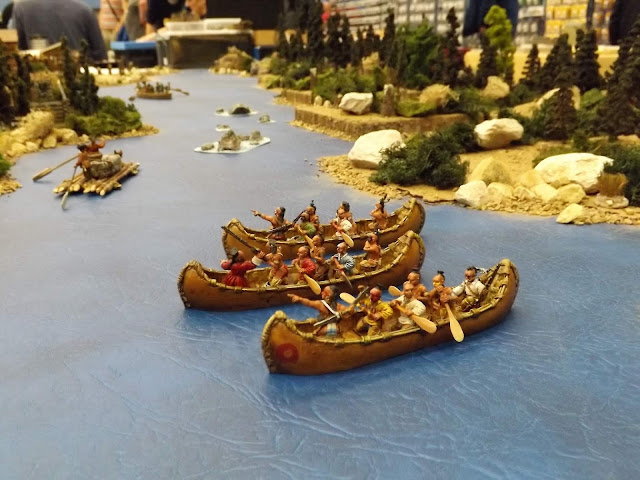 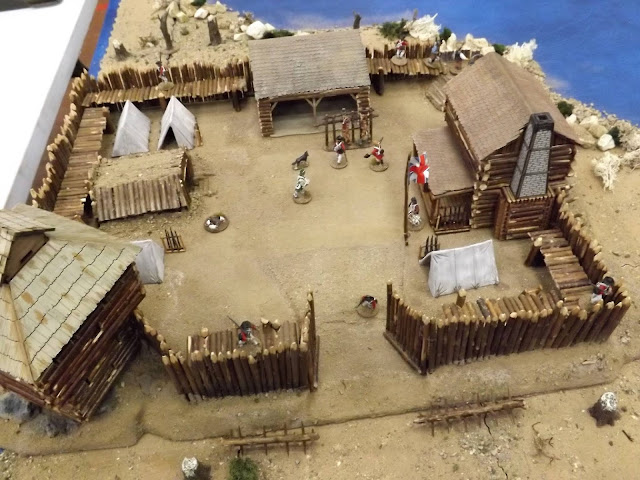 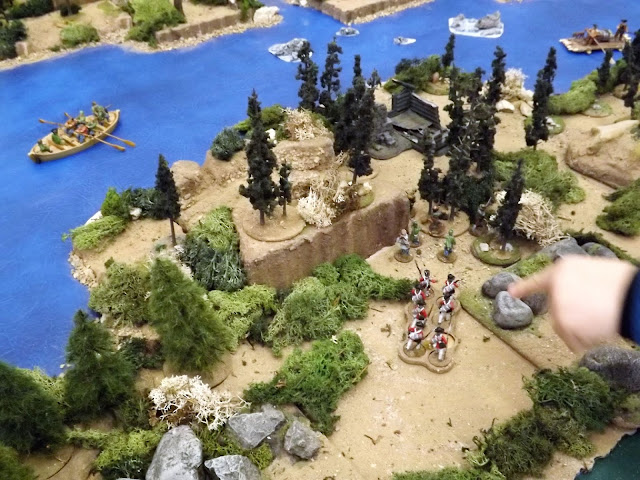 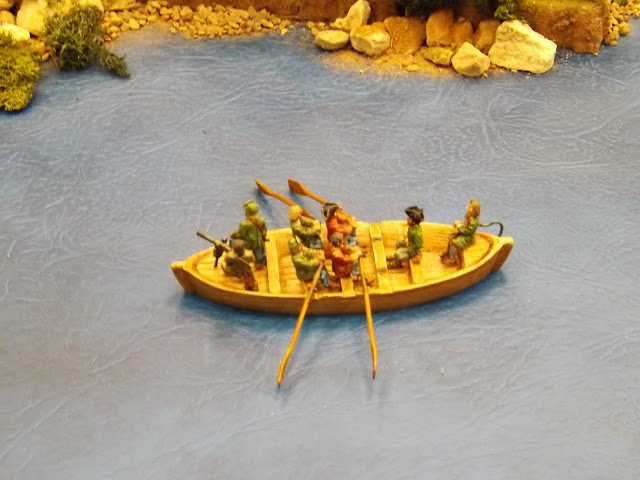 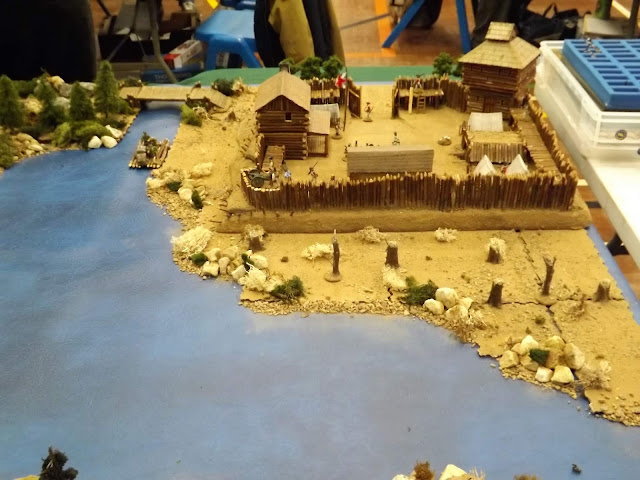 On my travels around the various games and trade stands I stopped off to watch a couple of chaps playing a little English Civil War set-to using 'The Kingdom is Ours' fast play rules from Bicorne Miniatures and published by Helion. 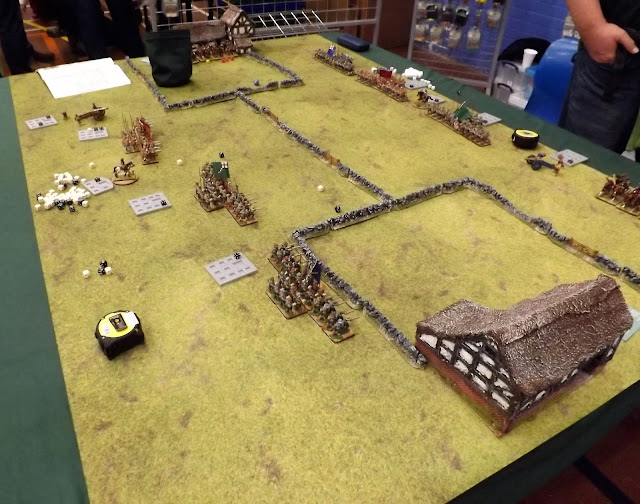 I have seen the rules advertised now and then but didn't really know too much about them and so it was great to watch the rules in action together with a selection of units from Bicorne who sell them ready made to work with the rules.

I really liked the chit draw activation system together with the combat exchanges I watched during play, and unfortunately there weren't any copies of the rules there on the stand as I would have bought them there and then, but I will pick up a copy anyway.

The activation is flexible enough to cater for individual units to brigades of multiple units should you want to play a bigger game.

English Civil War is a period I would really like to build a collection of figures around if I can just live long enough and these rules looked rather interesting. 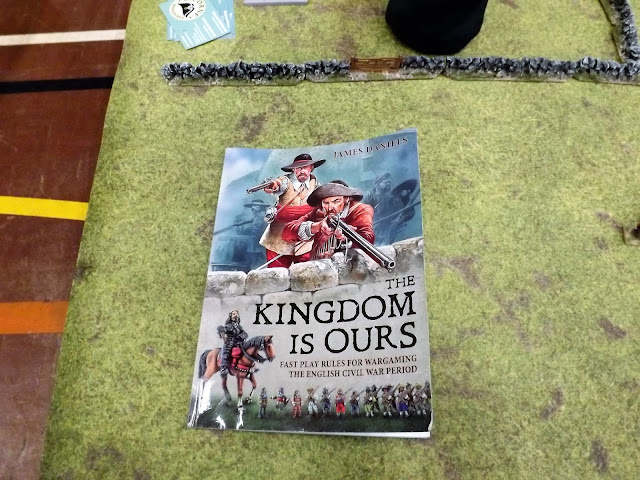 So there we are for another PAW.

I had a very nice day out at my first show for 2020 and thanks to all the chaps I met who made the day it was and especially to Vince and Bob who travelled up with me on the journey from Exeter.

Finally as a bit of a post-script, I mentioned progress on my current project and the additions made to the collection this month and include here a few pictures of the current builds in progress, constructed from the French Fleet, box set.


The box offers specific stern galleries and figureheads to produce named French frigates and 74s from the generic plastic kits together with a French three deck first rate.


Alongside the French three decker I have HMS Victory taking shape for which I am looking forward to festooning with signal flags to stir the heart of any red-blooded Briton.