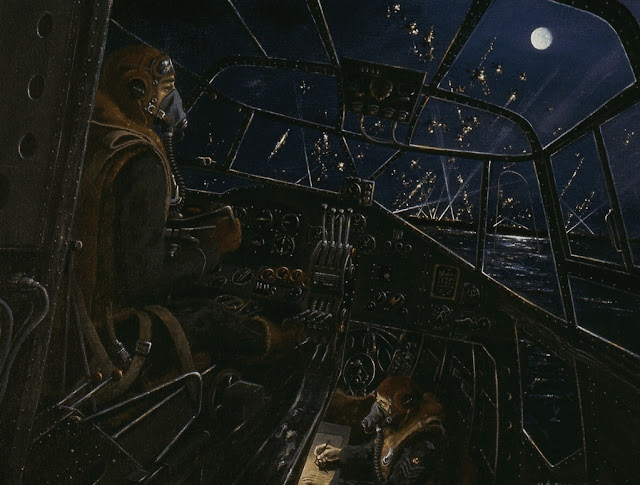 The Target for Tonight, Berlin Campaign moves well into the second half of our series of eight games with game six, the operation to Mannheim-Ludwigshaven on the 23rd-24th September 1943.

The campaign is delicately balanced with the British victory point tally pegged back over the last two games with Bomber Command starting the series with three very successful ops leaving them looking at a Major Victory, slipping to a Victory at the halfway and now resting in that range with an average of 14 victory points but only two points away from slipping further back into a draw, defined as 'Mounting losses cancel out the effects of bombing'.

However with an improvement in the German defences has come the inevitable effects of poor Pathfinder marking and the difficulty in bombing deep into Germany during moonless nights in very bad or bad weather conditions and the effects on that marking if it goes astray.

Thus with three games to go the campaign is very nicely balanced and very interesting to see how things will look as we get to the stage where Bomber Harris would take stock and decide to commit his force to an all out attack on the German capital in November; with half the raids from then until March 1944 focused on the city until Bomber Command was ordered to support the build up to D-Day with Berlin left battered but certainly not destroyed.


The Bomber Command War Diary, describes the raid on Mannheim-Ludwigshaven on 23/24 September 1943 thus;

'The raid was intended to destroy the northern part of Mannheim, which had not been so severely hit in the successful raid earlier in the month. The Pathfinder plan worked well and concentrated bombing fell on the intended area, although later stages of the raid crept back across the northern edge of Ludwigshaven and out into open country ...'

As with our rendition of the earlier raid on Mannheim our bomber commanders achieved a similar bombing result as described above, all be it with damaging losses. Thus it would be interesting to see if a similar bombing pattern could be achieved more cost effectively and would the Pathfinder marking replicate the historical result?


The weather briefing seen above together with the group rosters and individual plane load outs were issued to the players who set about deciding on the fuel/bomb lift plan for the raid that settled on a minimum fuel/maximum bomb lift arrangement seeing the Lancasters of 1 and 5 groups bombed up with a maximum lift of cookies, whilst the other groups would back up with the usual mixed load of HE/Incendiary.


The route to the target showed a planned approach straight in and straight out but coming into the enemy airspace over Wilhelmshaven to suggest a possible approach on Berlin before turning south to run straight in to the target before running back to the coast south of Amsterdam and home.


The forecast winds over the target were from the northwest and the broken cloud would permit the use of Newhaven target markers with less propensity to drift.

Our Group Commanders decided to mark the docks as the aiming point looking to keep their bombing well up to the marker to keep the concentration close to the centre of the city.


All the groups had a mix of experienced, novice and veteran crews with 3 Group Stirlings having one of the stronger crew line ups. However there was a high proportion of jumpy bomb aimers among all the groups which could only make things difficult when looking to bomb close up to the markers.


Thus with all the raid preparation done, and the aircraft bombed up, the various squadrons lined up at their respective airfields and started to roll down the runway into the darkening skies over northern England.


It was during the take-off and assembly that Op Six suffered its first casualties, although in this case all the crews involved survived the drama which saw 1 Group Lancaster, C-Charlie, with its veteran crew on its 21st op and later that evening 3 Group Stirling, F-Freddie, another veteran crew on its 21st op both abort due to undercarriage failure to retract, with both aircraft landing safely after dumping their loads. 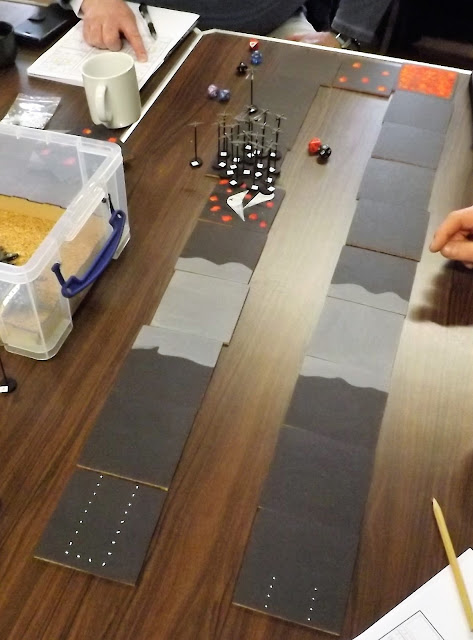 From the assembly to the enemy coast there were no further alarms as the stream continued on gaining altitude, testing guns and preparing for the adrenaline rush of the announcement 'enemy coast ahead' as all eyes strained in the darkness for any potential threat.

Unfortunately the mark one eyeball served no help for 4 Group Halifax K-King, another veteran crew on its 25th op and looking forward to a well earned break from operations and with a pilot showing signs of that fatigue with a developing pattern of early turn backs over the enemy coast.

This time there would be no early turn back as a III/NJG3 Me110 experten equipped with Schrage Musik approached stealthily from below and delivered a raking fire from that quarter that took out the port inner engine starting an immediate fire, but then raked back to the closed bomb bay causing a massive explosion in the night sky over the German coast.

The crew had no chance to react and probably didn't know what had hit them, as the stream, disconcerted by the flash, reported enemy starshells being used as they pressed on. 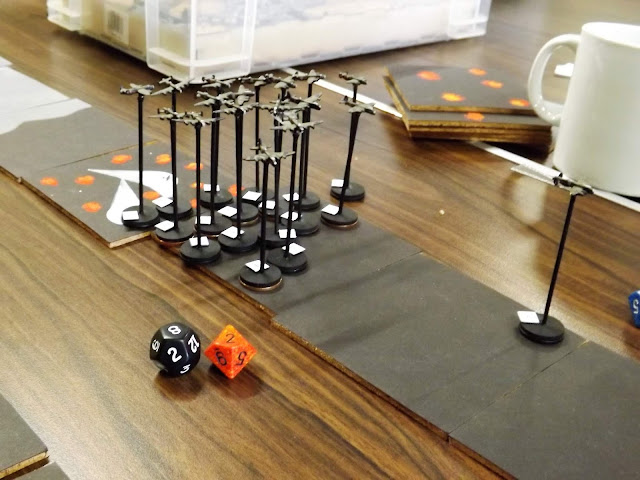 The next target for the NJG3 experten was 1 Group Lancaster B-Beer another veteran crew on its 18th op who managed to spot the German fighter on its approach and start an immediate corkscrew manoeuvre suffering hits to the port wing fuel tank and tail plane during its manoeuvre and managing to keep flying and make good its escape, later suffering flak damage and limping home after bombing with four damage die, only to succumb to all the damage on the return leg over the enemy coast, with only the bomb-aimer and mid-upper gunner escaping to be captured.

This same Me110 pilot would go on to intercept 3 Group Stirling I-Ink who would manage to escape without damage and complete their 29th op.


The next two casualties occurred close to Kassel as 5 Group Lancaster P-Popsie's veteran crew on their 23rd op spotted the I/NJG6 Me110 closing in on it and went into an immediate corkscrew, but a short burst from the German fighter saw the starboard outer engine burst into flames and the plane went into an uncontrollable dive, with just the bomb-aimer and rear gunner able to exit the aircraft before it hit the ground.


The same Me110 pilot would go on to claim a second victim as the stream turned near Kassel for the run into the target when 4 Group Halifax L-Leather, with a novice crew, only on their fourth op whose aircraft was badly damaged whilst corkscrewing, hitting another bomber in the stream, losing the starboard inner engine and causing a fire that a very inexperienced pilot was unable to deal with, before losing control and crashing south of the city with no survivors.


Thus with three aircraft shot down and two aborted on take-off, the stream turned in through the flak zone without any further loss and prepared to make the approach over the target.


Right from the get-go, the bombing run got off to a poor start with jumpy and even steadier bomb aimers dropping early with Jack, Queens and Kings seeming to be making up the complete deck of cards.

All aircraft completed their runs with no go-arounds and just one aircraft straffed by a lone FW190 Wild Boar fighter that caused a few holes in the fuselage, but otherwise no damage. 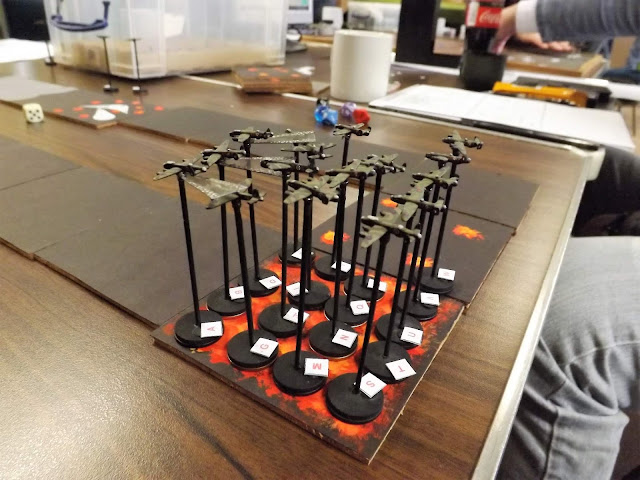 As the bomber stream set course for home the final flash photo of the target showed a reasonable cluster of bombing around the blue target marker, but with nearly half the bomb load dropped short leaving a lot resting on the accuracy of the Pathfinders in the poor conditions coupled with any drift from the prevailing wind.

The run home went surprisingly well, with the Nachtjagd drawn away by a spoof raid over Schweinfurt that explained the lack of freejagd Wild Boar fighters over the target which had been very evident on the previous two raids and a quiet run back to the coast with just Lancaster B-Beer, finally succumbing to damage sustained on the flight to the target.

The landing proved equally uneventful all bar 6 Group Halifax that had a 'sticky' landing that was recovered well by the pilot avoiding a likely tyre blow out and subsequent crash and the surviving crews were bussed off for debriefing by the intelligence teams.


The raid picture was quickly assessed and showed a poor bombing result with nearly half the crews bombing short with creepback falling into the open fields south of the city, which was made worse by Pathfinder inaccuracy and wind drift to pull the on target bombing into the southern outskirts, just causing two major fires in the residential areas of Ludwigshafen.


When the victory point calculation for the raid was done it showed two major fires added to the value of the target city producing just 14 victory points to which was offset by the Nachtjagd scoring four victories yielding 12 victory points for the quality of crews lost, netting just two points for Bomber Command for this op.


'Mounting losses cancel out the effect of the bombing'

However Bomber Command have two close range targets, Hanover and Dusseldorf coming up which will offer them the opportunity to bomb up with very heavy load outs, to get in and get out on a relatively short flight, hoping to score big points with fewer losses.

This will require scoring another possible 56 victory points in the next two ops to gain a victory, with the two city targets yielding 7 victory points for their value leaving another 49 points to chase requiring 12 major fires or 6 major fires in industrial areas, split between the two targets, or a combination of the two, before losses - by no means impossible having scored 48 points in the first two ops, but certainly challenging.

Next up - New 1:700th ships for my growing French fleet roll down the slipway for my current project 'All at Sea'
Posted by carojon at 08:42