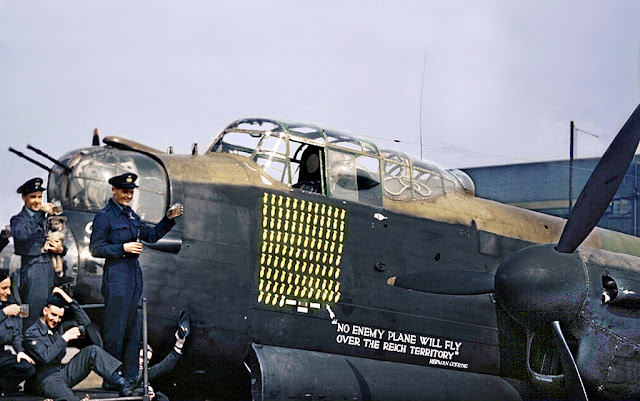 On the 31st August 1944, Bomber Command sent 622 main-force four-engined bombers against Berlin, following the Nuremberg Op on the 27th-28th August.

We played those two attacks in our previous two games of a recreation of the first month of attacks initiated by Bomber Command in the so called 'Battle for Berlin'. 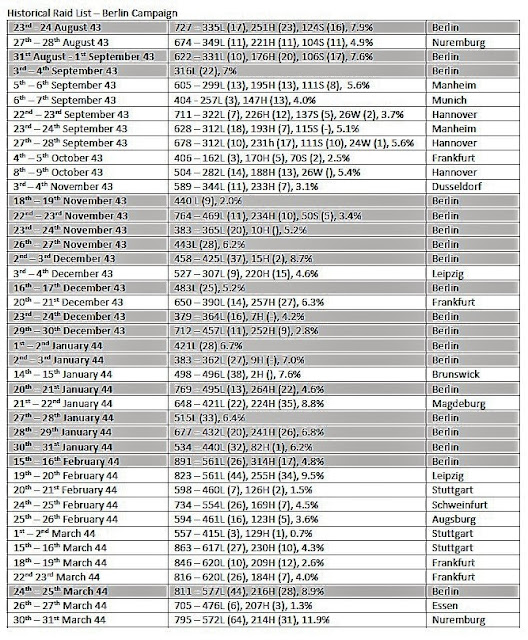 The attack route was kept fairly straight forward with a direct flight into Germany offering up cities such as Nuremberg, Leipzig and Hanover as possible targets, but seeing a hook north and north west to bring the stream in over Berlin city centre.

Bomber Command often avoided long straight in legs towards a target in this manner as it would offer the nightfighters the opportunity to get into the stream and fly along with it without any sudden changes of course to shake them off.

However with the second flight to the 'Big City' within a week and knowing how jumpy crews got going their anyway, it was felt the risk was worth it if it meant that crews felt they were getting in and getting out as directly as possible. 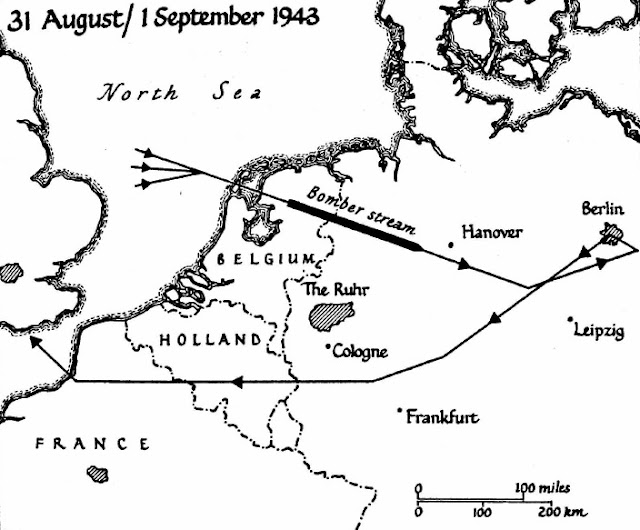 The weather was also key to getting bomber crews back on the ground on their return with all the inherent risks of landing in bad conditions with tired crews and damaged aircraft.

So the weather for our second op to Berlin showed thick cloud over the target and over home airfields during the return flight. 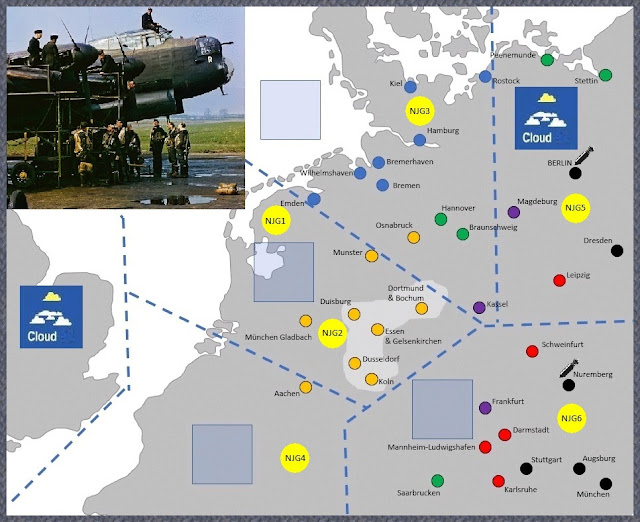 So it was off to the monthly meeting of the Devon Wargames Group with planes and ops briefs in hand to fly the third op in this eight op mini-campaign, looking to test out some rules we have been working on to allow us to use Target for Tonight to game the air battles of Bomber Harris and Bomber Command.

As previously, the Bomber Group manifest below shows the number of aircraft each group was able to put up for the op together with losses indicated and showing one aircraft turning back from 4 Group.


Our Group commanders decided to go for a conservative attack given the success of the previous two ops, with a standard light bomb load and plenty of fuel for getting back, arming 1 Group Lancasters with the 4,000 lb Cookies to attack the industrial and transport centres and the rest of the groups backing them up with a mix of HE and incendiary loads to help start the fires once the roofs were off.


As the groups took off in the dusk of the 31st August, there were very few mishaps with just a Lancaster from 1 Group 'D' Duff having a tyre blow out on take-off but with the pilot maintaining control to be able to clear the runway and join up with the group.


Things started to liven up as the stream crossed the coast over the North Sea with Halifax 'O' Orange turning back with the pilot complaining of stomach cramps and then a Stirling 'I' Ink crashing into the sea with all its novice crew lost, after an engine overheated and caught fire.


As the stream came in over the enemy coast another novice crewed Stirling from 3 Group 'J' Jug spotted a nightfighter closing in on the lower flying aircraft and although managing to put the aircraft into a corkscrew was shot down after the port outer engine was hit and caught fire, with only the navigator managing to bail out.


As the stream pressed on into Germany, two more aircraft succumbed to flak, one, Stirling, 'H' Harry losing track and getting coned over a nearby battery and the unlucky Lancaster, 'R' Roger which having escaped a Ju88 over Hanover and narrowly missed hitting another bomber during its corkscrew manoeuvre succumbed to the Berlin flak when its port outer engine was hit and caught fire seeing all the crew lost in the following crash.


The Berlin flak was as fierce as ever with a few aircraft picking up damage on the way in, but gave some respite from nightfighter attack, only to see three bombers attacked on the bomb run with an alert tail-gunner on a 3 Group Stirling 'G' George shooting down an FW 190 and the others getting away with none of little damage.


On arrival over the target the players set about implementing their plan of attack with the Lancasters of 1 Group going in first, looking to lay their Cookies on Industrial and Transport centres where the bigger bombs were required to start fires once the backing up groups had come in with smaller HE and incendiaries to mix in with them.

However a problem immediately became apparent as the thick cloud over the target meant that the target markers were not visible and thus 1 Group had to bomb blind trying to navigate to where they estimated their specific targets to be.


As the groups left the target area, it appeared that the bombing was fairly concentrated, but what exactly had been bombed would only be revealed on the debrief.


As the stream set course for the homeward leg, one aircraft in particular was leading a charmed life, 6 Group, Halifax 'W' William with its novice crew on board had managed to pick up three damage dice from flak on route to Berlin and would pick up another before seeing the English coast, and thus its progress over each leg became a focus of much interest as its pilot managed to keep the badly shot up aircraft stumbling along amid the bomber stream.


All went well for the returning stream through Germany with the occasional navigational error, soon corrected, but with the additional fuel compensating for the course corrections.

Unknown to the crews at the time, Beaufighters were operating nearby and managed to intercept an Me110 tracking the stream but failed to claim a kill.


As the stream finally crossed the enemy coast for home, 4 Group, Halifax 'N' Nanny was intercepted by an 'Experten' Me110 of NJG1 taking hits to the starboard wing and outer engine which promptly caught fire forcing the novice crew to bail out with all exiting the aircraft except the bomb-aimer.

Our final drama of the night occurred on landing as the battered Halifax 'W' William joined the circuit only to see the accumulated damage take effect and force the crew to attempt to bail out before it went down. Amazingly all the crew managed to bail out in time as the Halifax was seen to crash nearby in open farmland.


Once back on the ground the results of the raid were analysed and plotted on the target map above showing the results of a very well planned attack despite the drift and blind bombing required, seeing seven fires started in and around the centre and just four groups of bombs landing outside the city limits in open farmland.

This result keeps Bomber Command on track for a British victory after three ops and five to go, with the next op planned for our October club meeting after this year's 'Clotted Lard' show in September.

A really good game that rattled along, given the players familiarity now with the rules and the pre-game planning system using Cyberboard, I have adopted, to speed the set up process, together with recording in game events for reporting back in posts of our games.

One aspect I am contemplating to add in, to better reflect the challenges facing Bomber Command, is to increase the stress levels on crews returning to Berlin within the same month, simulating the reluctance to fly multiple returns in a short period of time among the crews. This could see bomb aimers reduced by one level of effectiveness and more pilots likely to make an excuse to turn back and/or dump their cookies over Germany.

So the next op will be to Mannheim-Ludwigshaven, hopefully for another 'wizard-prang'.