The battle of Gettysburg is one of the great encounter battles and marks a turning point in the outcome of the American Civil War.

Big battles for me, require the right set of rules that capture the feel for the period being modelled together with mechanics that facilitate easy play to handle the number of units involved in the action.

In addition scale is a big factor, something I have discussed in other posts, and for me 15/18mm is the ideal scale to allow for the compromise in ground scale to still allow a lot of battlefield to be modelled but with figures that have character and individuality that captures the look of the armies involved.

The American Civil War is not a period that has captured my imagination, not having the colour and 'scissors, stone, paper', combination of infantry, cavalry and artillery that Napoleonics has to offer, but I have been known to dabble in the period and enjoy the challenges 'Napoleonics on Steroids', to quote a friend, has to offer.

One of the rule-sets I have enjoyed in the past has been Fire & Fury, Brigade and Regimental level rules and having seen some of the chaps playing the second edition version of the Brigade Level set was really interested to see how they played. 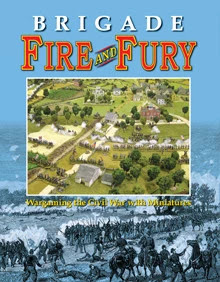 It was really nice to see that the description of them emphasised the desire to keep what was good in the original first edition, of which I own a copy, whilst improving certain aspects in terms of better modelling.

I have to say that from playing them, I found the changes relatively seamless and didn't really notice the difference until they were looked at closely, which I really liked.

So it was with great anticipation that I met up with friends over at Chez Land, hosted by Steve L and his wife Paula to play Gettysburg, the first day, with close on 800 odd figures gracing the table and focusing on the fighting that erupted on July 1st 1863, north of Gettysburg, Pennsylvania; as Lee's Army of Northern Virginia, 'bumped' the Army of the Potomac under General Meade, and more specifically the Union division of Brigadier General James Wadsworth and the Union cavalry division of Brigadier General John Buford sat astride McPherson's Ridge and the Chambersburg Pike.

The map above set out the positions of the initial troops, together with the key terrain, victory point areas and arrival points for the Union and Confederate forces, which sees the game recreating the events of the first day, July 1st 1863, over 21 turns with each turn representing half an hour of battle and with the game starting at 10.00 and finishing at 20.00.

We all gathered at Steve's to start play at 09.30 which we managed, playing our game through to 17.30 with a stop for lunch, and managing to complete twelve turns out of the twenty-one which stands testimony to how straightforward the rules are and seeing a game unfold uncannily like the historical battle, which might also say something for the rules.


Our battle commenced with the death of General Reynolds, failing to survive the test for his early demise, followed by the two lead Confederate brigades of Hill's Corps, those of Archer and Davis pushing forward on to McPherson's Ridge and up the railway cutting, to meet with fierce and accurate musketry from Wadsworth's division soon to be joined by Union guns from I Corps, as the divisions of Doubleday and Robinson closed up in support. 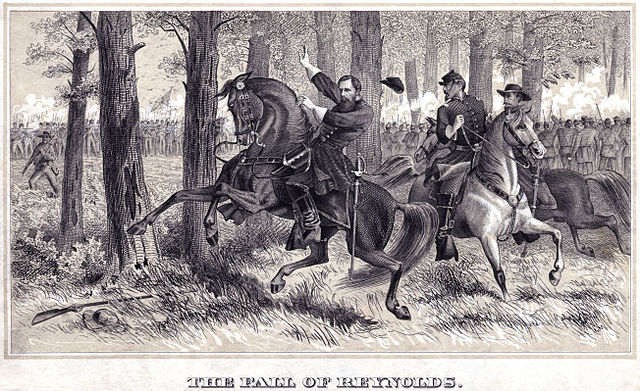 As the battle started to the west of Gettysburg, Buford's cavalry mounted up and headed to the top of Seminary Ridge just in time to deploy behind a stone wall to contest the arrival of other elements of Hill's Corps along the Mummasburg Road.

Hill's Corps made a determined effort to force a passage along the rail cutting, but Union fire proved particularly effective with a continual picking away of Confederate bases seeing Archer's brigade removed from the table once down to just two stands, and driving the Confederate follow up units to come on north of the railway in support of the early arrivals from Ewell's Corp in the north

These rebel advances were met by the cavalry under Buford, forcing the 'Rebs' to deploy, before remounting and falling back to a new stop line, incurring delays on the Confederate advance and allowing Union arrivals to press forward, via the town.

With no obvious opening along the approach to Seminary Ridge or via the cutting, both armies rushed to get forward north of the town whilst sniping at each other with guns until the two infantry lines closed up and the serious musketry could begin.

This process occupied the morning of the battle, but by the end of it, all the Corps except Reynolds were carrying significant casualties and all was set for the next big attack by Ewell's Corps.

The early brigade attacks from Ewell were met by the same unerring Union die rolls that had been dished out to Hill's lead troops earlier that day, but the build up of yet more Confederate brigades, allowing them to feel around the Union right flank, looked ominous, particularly as it forced the Union line to fall back into a shorter one, on more defensible terrain.

As the attacks developed in the north and northeast of the town, Hill's troops started to move south from the cutting as the Union line fell back from McPherson's Ridge, seeing I Corps artillery withdrawn from their positions around the Seminary and behind Seminary Ridge ready to move up it in support of the infantry above.


However the final big push in the north finally succeeded with the Union line driven in to the northern outskirts of Gettysburg in the late afternoon, forcing I Corps guns to change direction and gather atop Cemetery Hill able to bring fire support in and around the town as required should the line be forced still further back.


The Union troops had put up a stiff resistance and both Hill's and Ewell's Corps had taken severe losses and were both close to offering up their victory point allowance for taking heavy losses, however Howard's Corp was in a similar state, as the battle moved into its latter stage contest for the terrain based victory points in and around Seminary Ridge, Cemetery and Culps Hill.


However by the time we reached the latter stages of this first day's combat our actual day was drawing to a close and so we finished with a very interesting position closely following the historical events as the Union fought to hold a shrinking perimeter as it fell back through the town all the while seeing both sides batter each other in the process.


I have to say as a non-ACW aficionado, I really enjoyed the game with Fire & Fury playing as well as I remember, with the original incarnation.

That coupled with Steve L's lovely table and impressive collection of figures really captured the feel of this pivotal battle.


Thanks to Steve L for hosting the day and to Ian, Nick and Mr Steve (Confederate Commanders) and my fellow Union commanders Steve M and Stephen H for a great day of banter and wargaming.

Next up, the Peninsular War series of posts continues with a look at the battlefield of 'Bloody Albuera' and the fortress town of Elvas and with home improvements at Chez JJ coming to a conclusion, I am hoping to get some more pictures done of progress on the AWI collection.
Posted by carojon at 01:35 12 comments: