If you ask any student of the Peninsular War to name some famous cavalry units that come to mind, the Vistula Legion Lancers are bound to be included in the list. They would immortalise their part in the history of the war in company with the 2nd and 10th French hussars by the destruction of Colborne's British infantry brigade at Albuera in 1811; taking advantage of a fortuitous down pouring of rain that masked their approach and defeating any attempted defensive musketry as they took the 1/3rd (Buffs), 2/48th and 2/66th Foot in the flank, destroying the three battalions, with the 2/31st Foot just managing to form square and save itself, and almost turning the battle. However as the regiment took post at Talavera, all this lay in the future. 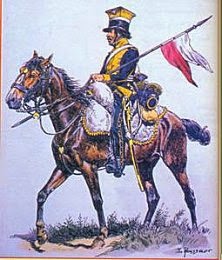 The Vistula Legion was the second component of Polish troops that served in the Peninsular War, with the Legion infantry and lancers serving separately from the troops of the army of the Grand Duchy of Warsaw. 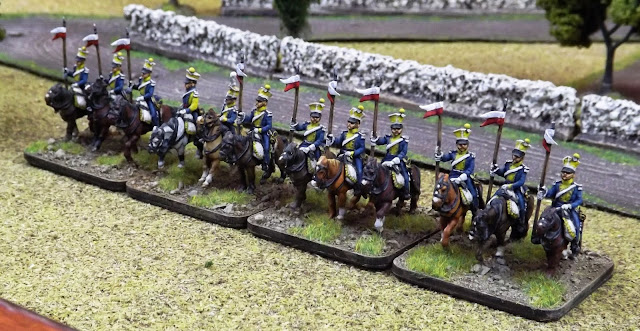 The 1st Vistula Lancers entered Spain with the other units of the Legion in June 1808 with four squadrons and a strength of 717 men under the command of Colonel Jan Konopka as part of Marshal Lannes Corps that was sent to lay siege to Saragossa where Colonel Konopka was wounded. 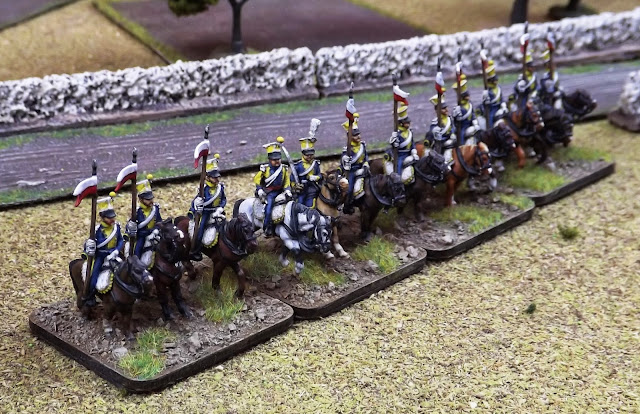 In August 1808, following the Spanish victory over Dupont at Bailen and the eviction of Junot's Corps from Portugal,  Napoleon realised that the situation in Spain would require his personal attention and the army as a whole was reorganised for the second invasion. This reorganisation found the Vistula Lancers attached to III Corps under Marshal Moncey as part General Watier's cavalry brigade: 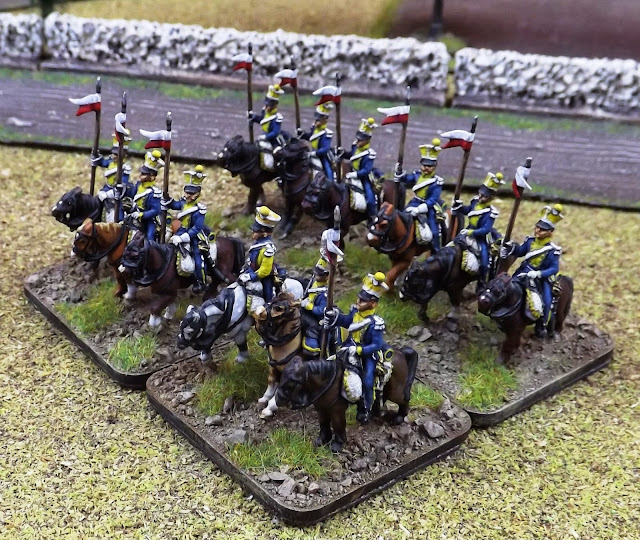 III Corps played a leading role in Napoleon's assault on the River Ebro and the second siege of Saragossa in 1809.

January 1809 brought more changes in the organisation of the French forces with Napoleon realising his need to prepare for a coming war with Austria and the Vistula Lancers found themselves briefly attached to General Lasalle's Light Cavalry Division with the 9th Dragoons as part of Montbrun's cavalry brigade based at Talavera. However this new division only lasted a month as three of its generals left for service on the Danube with the Emperor between January and March and with Lasalle himself recalled in April. 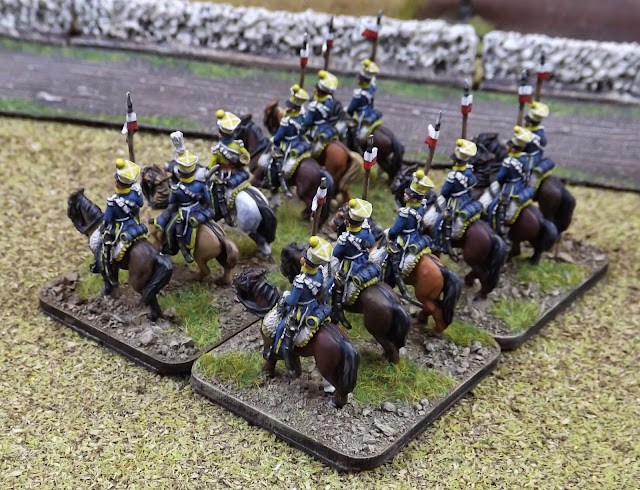 In February 1809, the regiment was back under the command of General Watier as part of III Corps under General Junot, who replaced Marshal Moncey during the second siege of Saragossa on the 29th January 1809 seeing the city surrender, after an epic struggle, on the 20th February.

In April 1809, the regiment was reassigned to General Ormancey's Light cavalry brigade part of Merlin's division in IV Corps commanded by the recently appointed General Horace Sebastiani and operating south of Madrid. It would be under this command that the regiment would be present at Talavera. 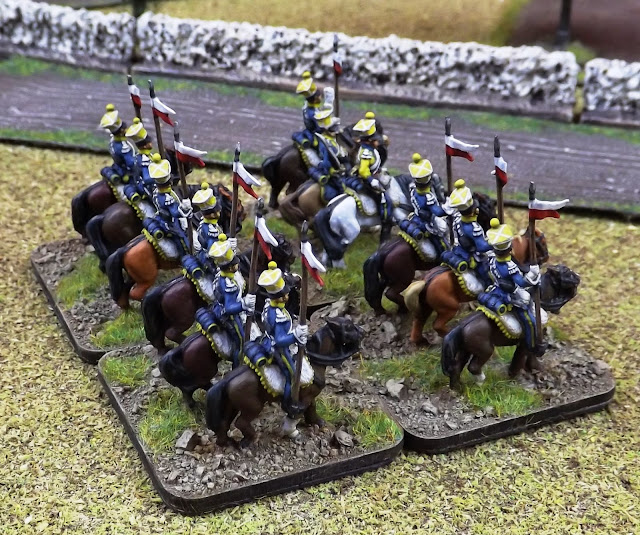 The brigade commander, Colonel, Baron Francois Leon Ormancey was one of the older officers commanding in the army at 53 years old and would not be confirmed as a General de Brigade until the following year being the second oldest colonel to be promoted among all Peninsular cavalry generals. The average age of a newly promoted General de Brigade was 37 years old.

The regiment was in reserve to the division for most of the day briefly relocating in the afternoon to support French manoeuvres in the northern valley. They suffered casualties of just two wounded, reflecting their passive posture during the battle. They would certainly vent any frustration from their first meeting with the redcoats two years later, but that, as they say, is for another day.


The illustrations above are from the excellent resource that is Histofig
http://empire.histofig.com/-Les-legions-polonaises,183-.html

My Vistula Lancers are composed of figures from AB using the Grand Duchy of Warsaw range of Uhlans. The Vistula Lancers portrayed by AB have them using pointed shabraques (saddle cloths) and the classic illustrations of the Lancers has them using French style sheepskin saddle cloths with yellow dogs teeth edgings, hence the recourse to using the Uhlan figures after removing the eagle badges from their Czapkas. 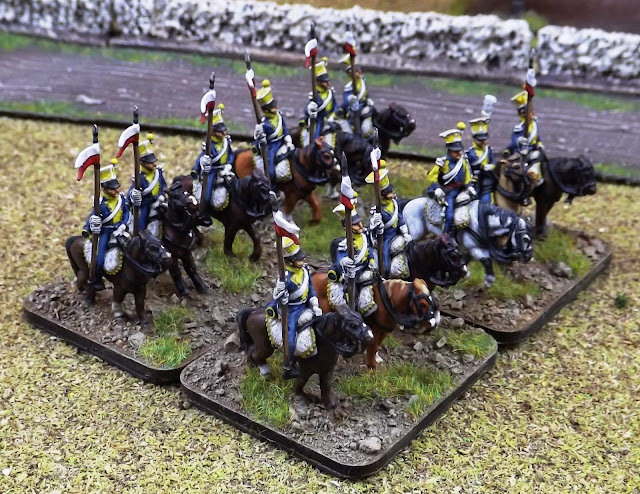 Next up, "Intellegence Officer in the Peninsula" - Book Review, Talavera - Attack on the Pajar de Vergara and the Westphalian Cheveau Legere. 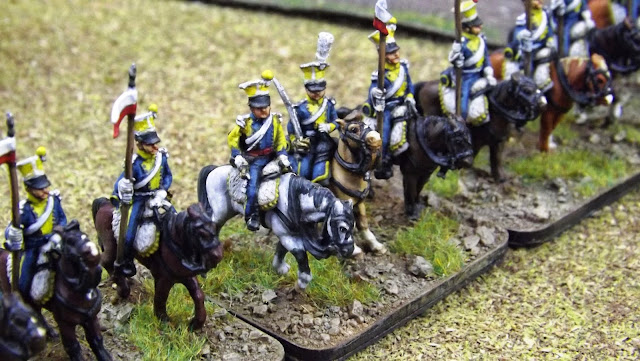 Other sources consulted for this post;
Charging Against Wellington - The French Cavalry in the Peninsular War 1807-14, Robert Burnham
The Peninsular War Atlas, Colonel Nick Lipscombe
Sir Charles Oman's orders of battle
Posted by carojon at 00:05