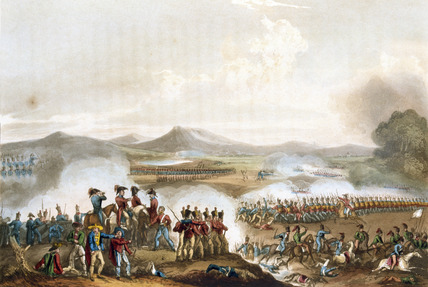 As the Talavera project is developed the plan has been to put together a group of scenarios that  will allow the battle to be fought in smaller games whilst building up the collection to enable the full afternoon attack to played through. 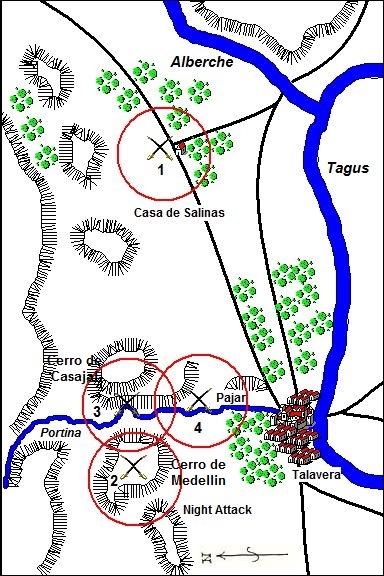 In addition the scenarios should be enabled to be linked together to recreate the two day battle of Talavera, carrying forward casualties, fatigue and morale changes.

So far we played through the first scenario "Casa de Salinas", back in February, which recreated the attack on the British rearguard on the 27th July 1809 as the Allies fell back to the Talavera line.

Next up on the game plan is the "Dawn Attack" that saw Victor have another go at taking the Cerro de Medellin the next morning; when at 5am a signal gun fired and heralded a 30-45 minute bombardment from over fifty pieces of French artillery.

This bombardment was followed up by an assault by Ruffin's division, which should have been supported by the fresh troops in Villatte's division. A break down in French coordination only saw Ruffin's men attack up the steep slope, only to be dealt with by steady British musketry which together with a sharp counter-attack drove them back to their own lines losing 1,300 casualties whist inflicting about 750 casualties on General Hill's division. 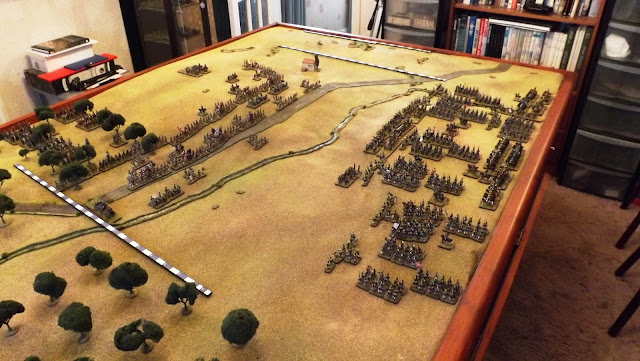 This scenario presents some interesting challenges to designing a game that offers both sides opportunities and threats to manage, together with the peculiarities that affected the troops involved.

Thus I will be looking at incorporating fatigue effects on troops involved in the previous night attack, British attempts to reduce the effects of the French bombardment (lying down, limited reverse slope), trigger points to allow Villatte to follow his original orders to support Ruffin, plus a few other ideas that may come to mind.

This scenario is designed to either leave the French stranded, as in reality, with just one tired infantry division suffering punishing casualties and unable to press the assault sufficiently to cause a more general action to be brought on that will enable the French to take victory points on into the next game. Alternatively the French force of Ruffin's division can break through on to the summit of the Medellin, enough to convince Villatte that his boss knows what he is doing and that he should reinforce success with an attack of his own on the KGL to his front.

What ever the outcome of the play tests planned to build this into an interesting challenge for both sides it provided a good excuse to get a large part of the current collection on the table to assess the look and gauge the fit of the two armies when it comes to fielding the full battle.

The pictures are not up to my normal standard as I took them freehand without the tripod and lights, but hopefully they are good enough to give you an impression of the look 13,500 French troops versus 10,500 British.


So prepare as we get ready to unleash the dogs of war as Marshal Victor launches his veteran battalions at the British leopard, Vive l'Empereur, en avant!!
Posted by carojon at 01:41