After a well earned post Quatre Bras lunch, we headed off down the Nivelle road turning off right after the town of Marbais and towards the little village of Brye. It was to this village that Wellington road on the morning of the 16th to meet with General Blucher at the Mill at Bussy arriving at about 1pm.

During his conversation with the Prussian commander he pointed out the advantages to be gained by putting more troops behind cover, but Gneisnau riposted that Prussian troops like to have a plain view of their enemy. Wellington then promised to bring at least part of his army over to Ligny.... "provided I am not attacked myself".

The Mill at Bussy would have proven near impossible to have found had it not been for Alan's research of the area. The base of the mill is all that remains, almost hidden behind the back garden wall of the house garden in which it sits.

Finding the exact spot though is more than worth it just to get the amazing view out over the battlefield of Ligny and imagine the Prussian troops arrayed on the upper slopes above the towns of Ligny and St Amand that caused Wellington to politely make his observation.

The other aspect that strikes the first time visitor is just how spread out Ligny is compared to Quatre Bras and Waterloo.


From Bussy we headed down the hill into Ligny and passed a rather anonymous grassed embankment that once formed the back stage to a very important episode in the history of the Hundred Days campaign.

We were looking at the spot where it is believed that Field Marshal Blucher was pinned under his dead horse for several minutes after his failed attempt to stop Napoleon's final attack with elements of the Guard supported by Milhaud's cuirassiers, the fire of sixty guns and followed up by the Guard heavy cavalry.

Marshall Blucher, determined to blunt this French attack charged into the fray at the head of thirty-two Prussian cavalry squadrons, having little effect other than to buy his infantry time to pull out and by 9pm the last Prussian cavalry elements were driven off after a skirmish near the Mill of Bussy leaving 16,000 dead and wounded on the field of battle.

During this last Prussian counter-attack, the old Prussian general lay trapped under his dead horse, ridden over by friend and foe alike, leaving him badly shaken. Fortunately his loyal aides remained close at hand waiting for an opportunity to rescue the Prussian leader, leading him away on a fresh horse under the noses of the victorious French troops.

Given Gneisnau's somewhat poor opinion of Wellington, it is difficult to imagine the Prussian support at Waterloo being so fulsome had the old Marshal been killed or captured at that moment.

Moving on in to Ligny we stopped at the General Gerard Centre which houses an excellent museum focused particularly on this particular battle and its part in the campaign as a whole.

This has to be one of the best of the smaller museums dedicated to the campaign and should be on the list of places to visit if you are going to Ligny.

Dotted among the pictures, maps weapons and other associated artifacts were some lovely well painted 54mm figurines that were for sale in the shop at about 75 euros. 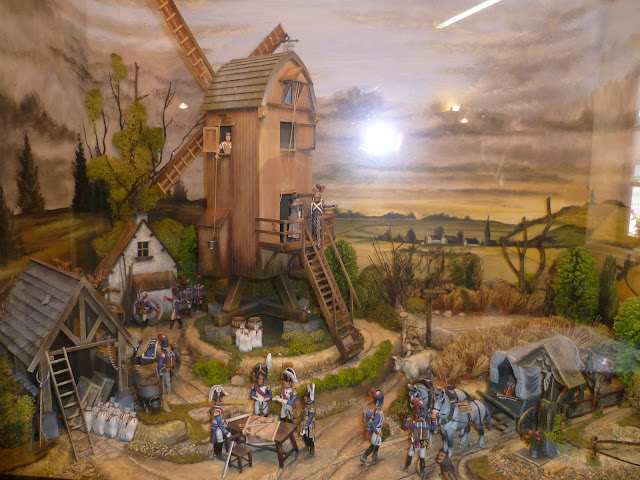 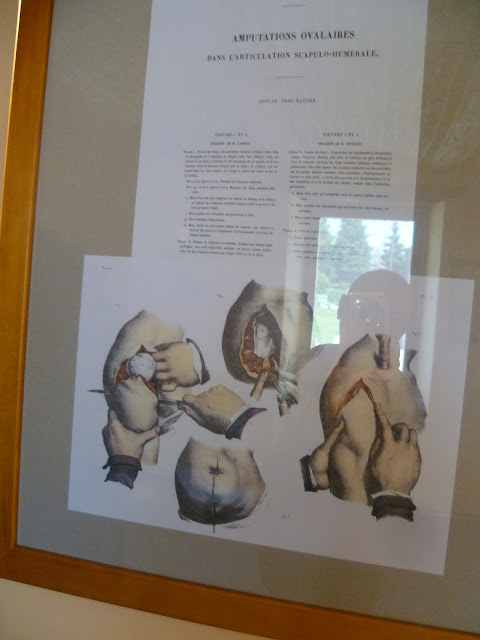 The museum has a very interesting display illustrating the techniques and skills of the surgeons who were kept very busy if not somewhat overwhelmed during this bloody campaign.

The major gap in their knowledge was their unawareness of bacterial infections in the pre Pasteur era, although it seems that some surgeons recognised the need to amputate earlier rather than later to give a better chance of survival. Of course all this work done with little or no pain relief. 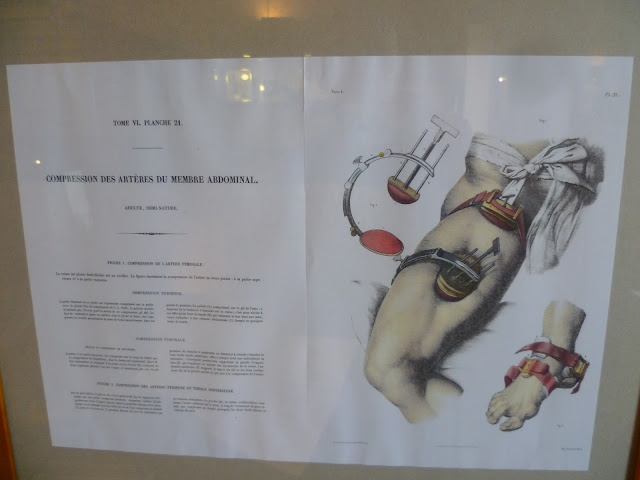 At the back of the centre was a display of a supply waggon, field forge and military ambulance. Ok I could fault the paintwork, a little to yellow for my liking, but very nice to see none the less. 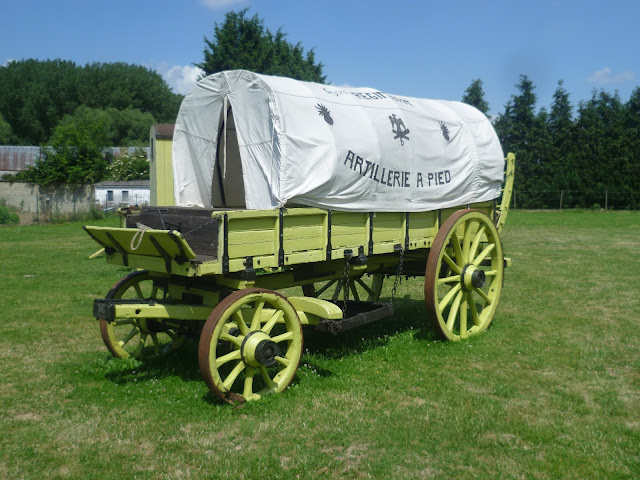 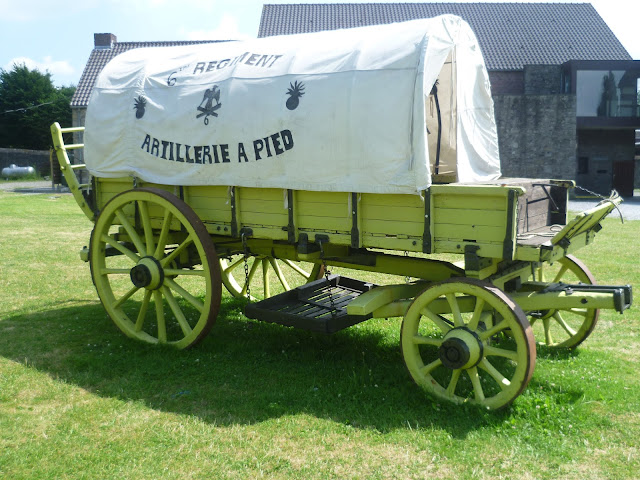 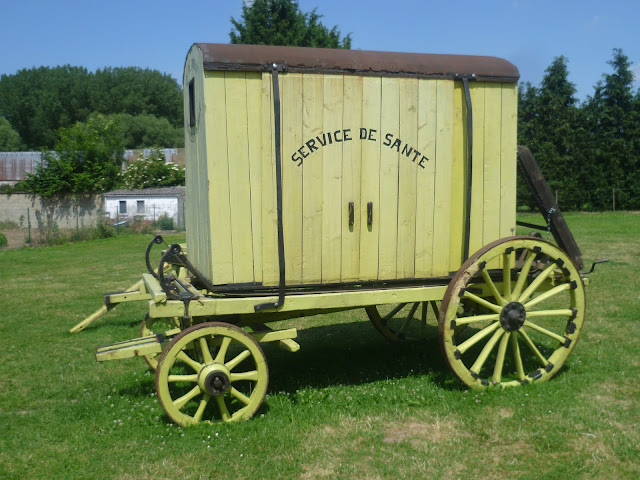 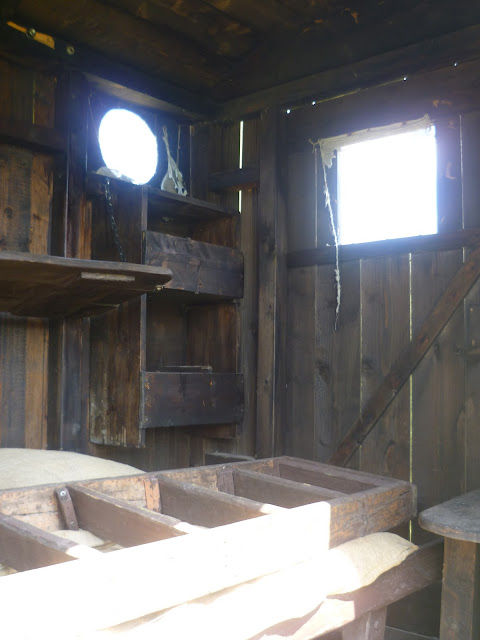 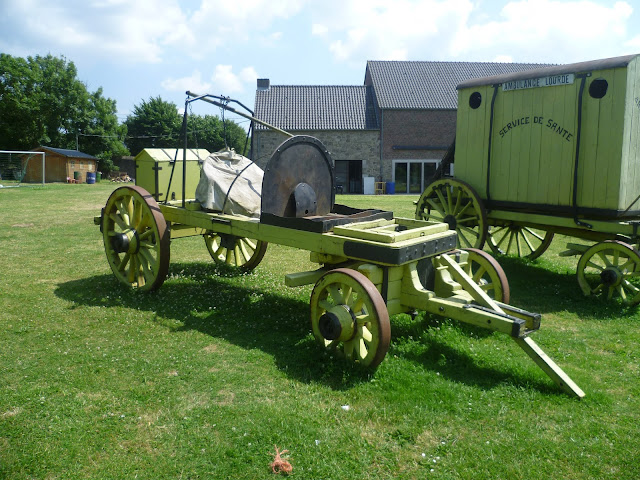 As a final word on the pleasure that is visiting the Gerard Centre museum, I was able to purchase some battlefield treasure in the form of some pipe fragments together with two musket balls, one badly deformed after hitting something or someone. These items found in the grounds of the centre are sold in little bags for 5 euros and make a nice little memento.

Much of the original town of Ligny was destroyed by the fires caused during the French artillery barrage and only a few buildings from that period still stand today. Two farms in the town are key features captured in the artwork illustrating the fighting. 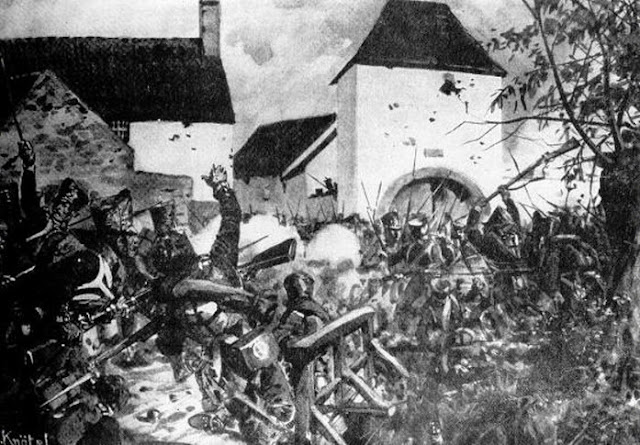 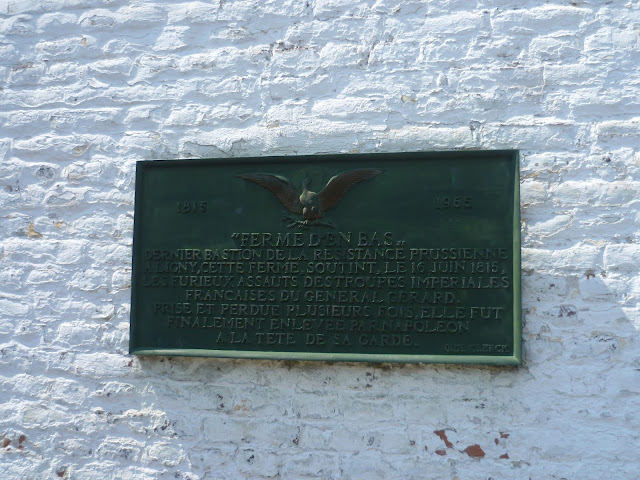 The Ligny brook was one of the key features that Blucher and his Prussian army thought they could defend behind, forcing the French to attack through the towns which they intended on disputing with the bayonet.

However, as can be seen, the Ligny is not that a formidable obstacle, and Prussian bayonets were countered with French roundshot. 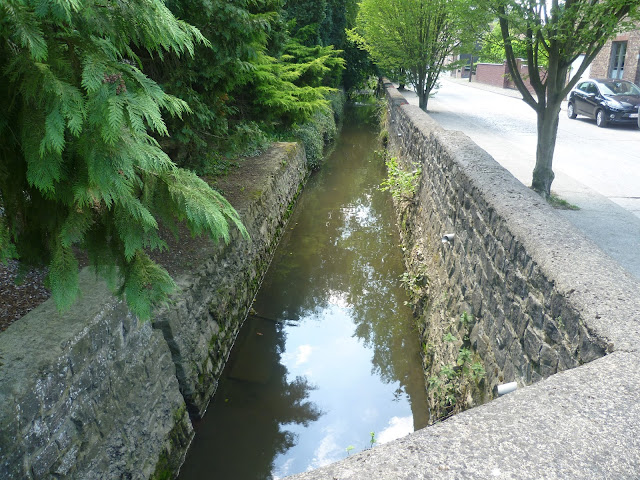 The Tomb de Ligny is a neolithic mound south of the town and provides panoramic views of the battlefield making it an obvious vantage point for Napoleon to use whilst coordinating his attacks on Ligny and St Amand. The modern views are more interrupted by tree lines that were not present in 1815, but the panorama is easily identifiable from contemporary pictures such as the one heading this post. 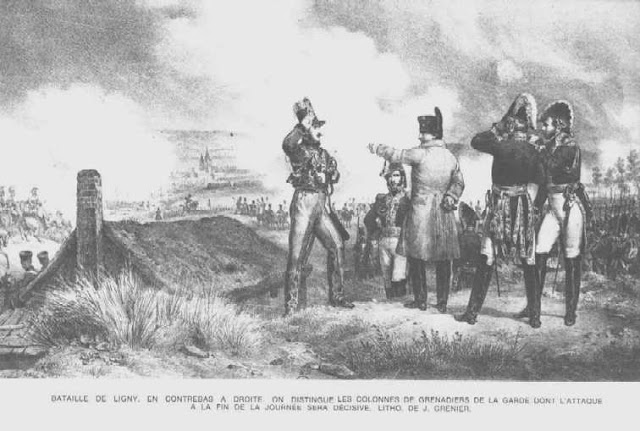 It was 11am on the 16th June 1815 when Napoleon arrived at the Fleurus Mill to observe for himself the reported build up of Prussian troops deploying around Sombreffe. From the mill he could observe Vandamme's corps facing Zeithen's troops near St Amand, and the view convinced him that this was where he should direct his main attack, moving the emphasis away from Ney's flank, writing a new order to the Marshal directing him to clear the crossroads at Quatre Bras and swing his army in on the Prussian right flank at Wagnele. 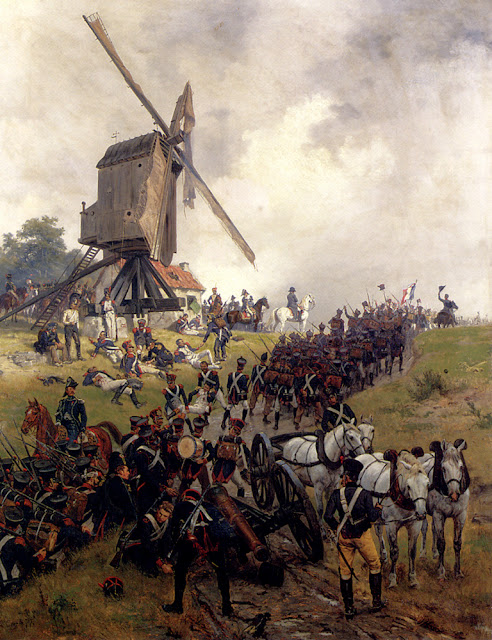 The remains of the old mill record Napoleon's last victory alongside two previous French triumphs of arms, including a familiar name who features in my Talavera project, Marshal Jourdan, the chief of staff to King Joseph. 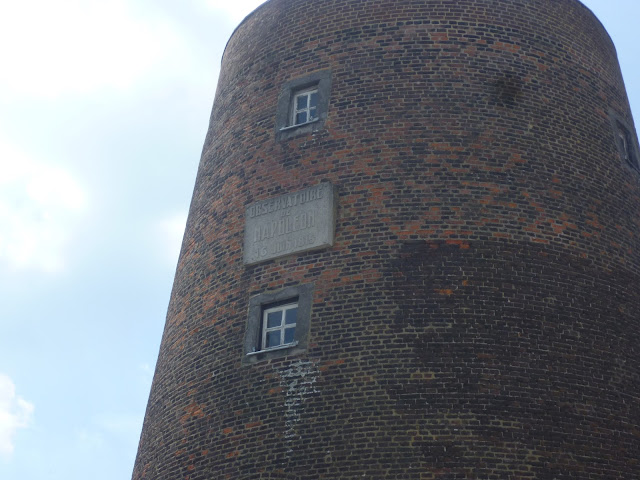 The battle of Ligny, although Napoleon's final victory does not in my mind rank anywhere near his best. It rather feels that here as in most of the campaign the Emperor was simply going through the motions. The frontal assaults combined with massed artillery barrages certainly did the trick against an almost naive Prussian deployment, and the thought of bringing some or all of Ney's force in on the enemy right flank to seal their fate has an obvious logic. But Ney was ordered to do something similar in 1813 at Bautzen and that didn't exactly turn out as planned.

In the end, after observing D'Erlon's corps march away from the battle, Napoleon was forced to commit the Guard to "seal the deal" but the time taken to deploy the two French corps before starting the battle at about 14.30 allowed the Prussians to take advantage of nightfall and a summer storm to cover their disorderly retreat.

The failure, on forcing the Prussian retreat, to organise an immediate pursuit was a glaring error that Napoleon should have been aware of and was only compounded the next morning with an incredible lethargy that also ended up allowing Wellington to escape from Quatre Bras. These errors would cost Napoleon dearly and he would go on to add a few more for good measure as the campaign continued.

Next up, we follow Grouchy in his pursuit of the Prussians to Wavre, then trace Blucher's march to Waterloo, which gave me a completely different perspective on the famous battle.
Posted by carojon at 10:11