French Line Infantry Painting Tutorial Part One - The Base Colours

It's been a while since I went through a painting tutorial, and now being very much involved in adding significant numbers of French line infantry into the collection and with the 206th anniversary of the Battle of Talavera tomorrow, I thought it might be of interest to illustrate the process and colours I prefer to use when painting these troops.

Getting efficient at producing a nice looking unit is what this series of posts will be a about and lets face it, if you are into Napoleonics you are probably going to want some of these chaps in your collection and probably a lot of them.

The battalion shown below was waiting for the first colour to dry on the groundwork as I began work on the base colours for the third battalion to complete my second regiment, the 96e Ligne. It occurred to me to photograph and record the work to illustrate my method.

I tend to have two battalions of French primed with undercoat at a time to allow work to proceed seamlessly from one to the next as we want to get on with playing as much as we enjoy painting.

My battalions are in units of twenty-eight including the four skirmishers and my senior or first battalion would normally have the mounted colonel on the command base, my second battalion a sergeant with the fanion group and my third with a pioneer with the fanion group. In addition I like to put in the odd personality figure like a cheering soldier, or in this case a fusilier falling wounded.

The first stage is to apply the base flesh colour, which I tend to do with Citadel Ratskin Flesh. I find this colour gives a really satisfactory dark base to my flesh and although I have experimented with adding Citadel Riekland Fleshshade wash, now only use this on bareheaded individuals to contrast their hair from the rest of the face. To see the effect of the wash then follow the link to the 2/96e Ligne to see the cheering soldier. 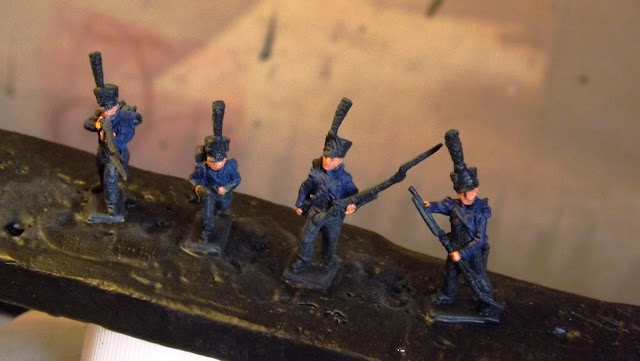 At this early stage I am focused on making the greatest progress and getting the work done in the right order. The right order of putting colours on takes a bit of time to work out, but when faced with working through multiple units it becomes an important aspect. I will write down my sequence so I can come back to a project and pick up where I left off without having the painful process of re-learning it.

So in this case, the last major colour to apply will be black because black gets applied over the top of other colours to finish off the base set up, such as black musket barrels over brown wood-work. Not forgetting of course that black is not a colour!

After the Vallejo Dark Prussian Blue jackets, I applied Coat d'Arms Dark grey to some great-coats, some trousers, all lapels and waistcoats, metal mess bowls and water bottles.

Next colour on was Vallejo Burnt Umber to my Spanish cloth clad trousered soldiers and all the back-packs.

The final large colour - shade, call it what you will, is the black over the primer to finish off the boots, shakos and peaks, musket and sword metal work, sword scabbards and ammunition pouches.


With this big chunk of block work done it is time to go and make yourself a well earned cup of tea before getting stuck into the final base coat preparation covering the straps, laces, cuff/collar/shoulder straps/plumes and water bottle work before we can start to make these chaps come alive.

If you are interested in your painting skills, I would really recommend checking out the article published in Wargames Illustrated 287 which was available as a downloadable pdf called "The Four C's of Painting" by Joe Sleboda that covers off Colour, Composition, Contrast and Correction and is a very good summary of the basic skill set on deciding what you are going to do, where and correcting those little errors that can creep in to brush work.

So whilst prepping these guys I have been thinking about the groups of four figures that will be together on a base. The stick is organised so each group of four are together and I can make sure that there is plenty of variation in the group as far as castings and colour choices. In addition I will correct errors in the painting as I go ending up a little bit Obsessive/Compulsive but at least I can walk away and do something else afterwards, because I know the job has be done right! - "calm down Jon, step away from the figures!!!"

The final stage of getting all the base colours on to your figures should leave your models looking like the picture above. Having done all the large areas we are now doing the smaller detail areas such as small straps, lace, chords, musket slings, turn-backs, plumes, pompoms, brass/gold metalwork and water canteens. 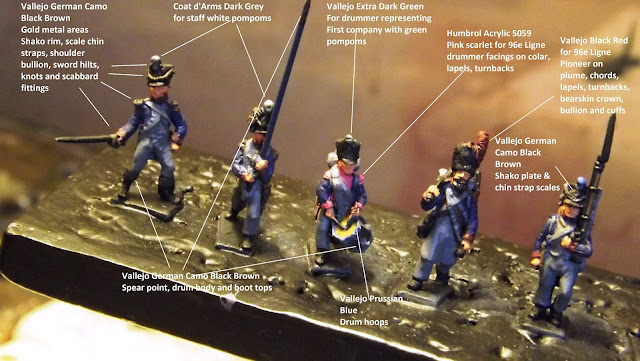 Hopefully my pictures of the finished base coat figures will show you the colours I use for these little areas. Others that I noticed I hadn't highlighted include the raised gold buttons on the backs of the officers habite jackets that are found at the back on the waist line. I touch these in the Camo Black Brown as they will come up a treat when tipped with gold. 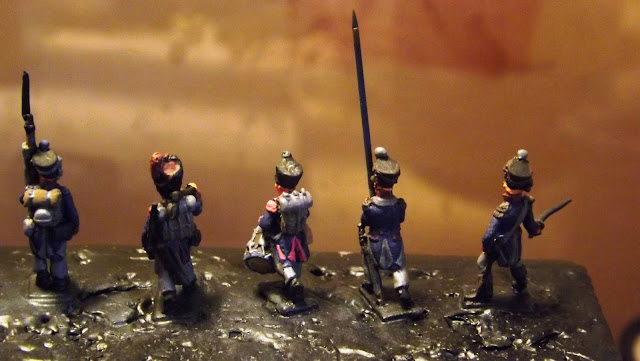 Note also that, unlike the British, the French didn't have a standard water canteen and so these figures carry three examples, the ghorde, the whicker framed bottle and the metal canteen, each requiring a different paint job. The four fusilier companies are represented with three groups of four fusilers having blue, orange and purple pompoms. I represent the first company with my drummer having a green pompom. The staff (officer and fanion bearer) have white pompoms and the elites including the pioneer either in grenadier red or voltigeur green/yellow. Note also that my elites carry distinctions peculiar to the 96e Ligne, hence the illustration at the top of the post as another reference to commonalities between regiments. 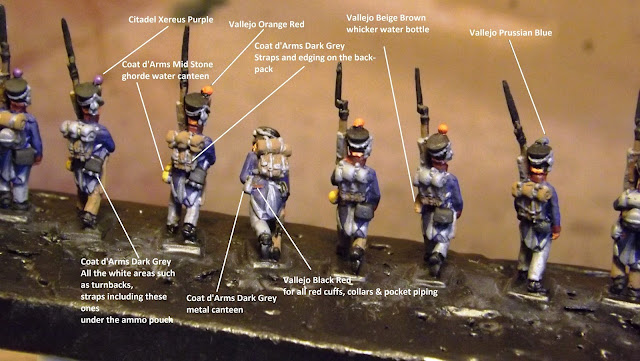 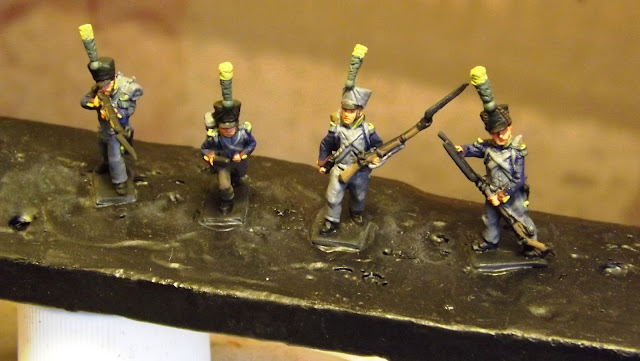 The volitigeurs of the 96e Ligne wore yellow cuff slashes as seen above, instead of the more standard white. Note that I haven't done all the piping, such as around the collars, some cuff slashes, turn-back and lapel piping. These will get done in the next stage as they can get in the way of the primary highlighting and it is simpler to add them later in the process. Likewise there are some small straps across the front of some of the fusiliers from which the water bottles are hung and are easier to apply later in the job. 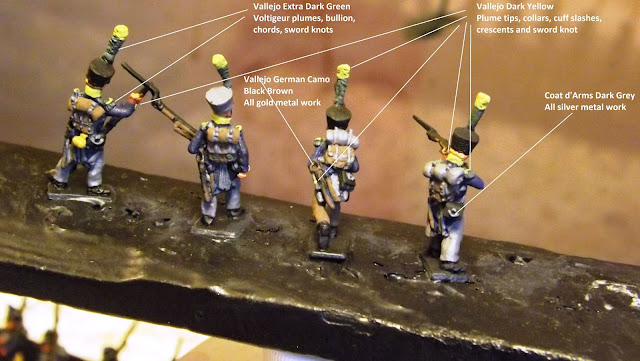 So that is the base coat finished and now we can move on to the really fun stuff of shading up to a third coat to try and make these little chaps pop. However it is worth stressing that a good result relies on the foundations laid in the first stages, undercoat and base coat and attention to detail at this stage will reward you later.

The other aspect I would highlight here is that of colour selection. The predominantly blue coats of the French lends itself to a "cold" white, hence I have based my white areas on a grey. The British and Spanish in the red and brown coats lend themselves to a "warm" white and thus I would tend to base coat the white areas with a buff base coat.

You will note that the figures look dull in their dark colours. This is deliberate as these dark shades will underpin the more vibrant upper shades and provide the contrast in the shadowed areas. This technique is the same for painting 28mm figures and we are not relying on any black lining to delineate colours or areas of shadow.

Next up - Part Two and the first highlight colours
Posted by carojon at 02:13