This Bank holiday weekend Carolyn and I spent time with my sister and brother in law visiting my son Will and his girlfriend in Paris before his work placement comes to an end later next month. Taking any excuse to enjoy the delights of Paris and the fantastic restaurants I took time to grab some pictures that I hope will appeal to the Napoleonic history buff.

The Arc de Triomphe du Carrousel was originally erected as a gateway to the Tuileries Palace and now sits majestically in front of the Louvre. The picture above by Hippolyte Bellange gives a great impression of the arch in its day, playing host to a march past by the Grenadiers of the Imperial Guard. 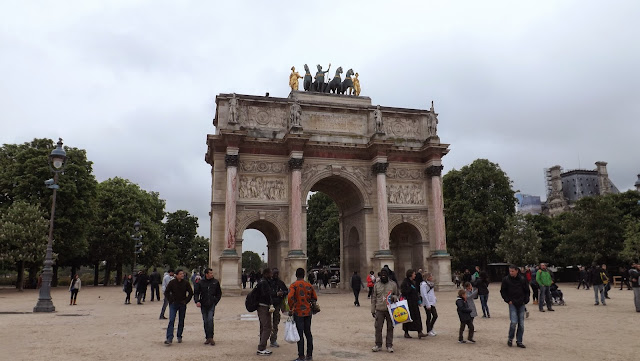 This classic Roman style triumphal arch (modelled on the Arch of Constantine in Rome) was built between 1806 and 1808 to celebrate the glory years of Emperor Napoleon's rise to be master of Europe; with the victories of Austerlitz in 1805, Jena-Auerstedt in 1806 and Friedland in 1807 and with the the Treaty of Tilsit signed between Napoleon, Czar Alexander of Russia and King Frederick William III of Prussia, bringing a temporary end to hostilities and leaving Great Britain as the only opposition to his dominion. 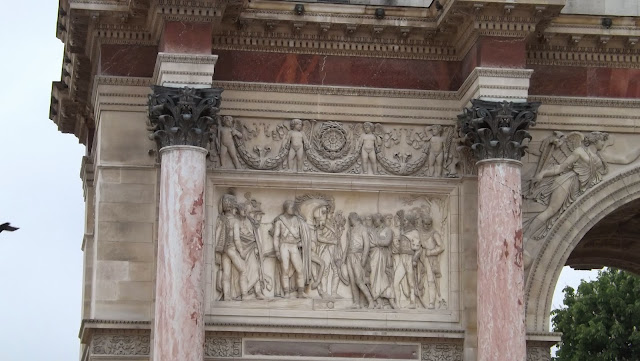 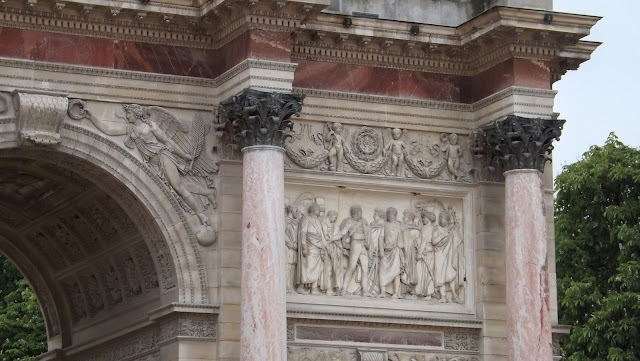 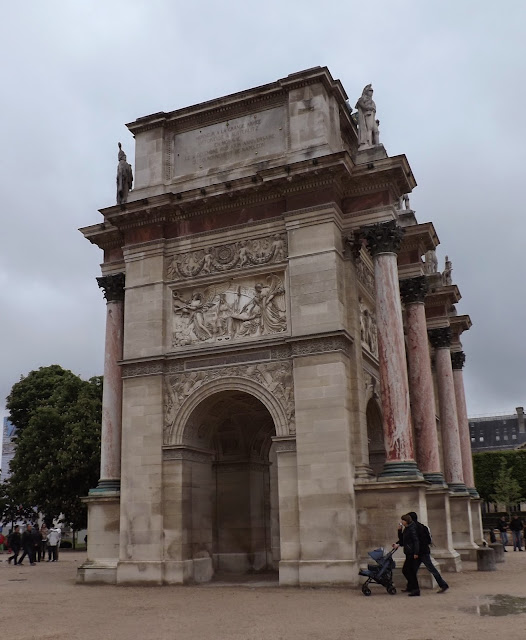 The arch is in remarkably good condition although sadly, several of the statues of French soldiers that fought during the period have been damaged by pollution, The best preserved are the French sapper and light infantryman seen above top right and the cuirassier and dragoon on the other side.

On our previous trip to Paris last year, I spent some time looking at the surrender of Paris in 1814 with the allied victory in the fighting around Montmartre. The hill and its windmills were a prominent landmark in the open countryside north of the city where the fighting took place. 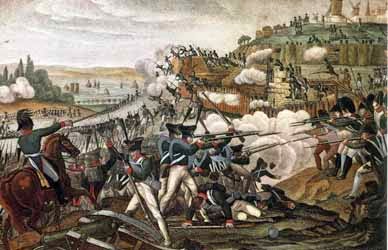 This time we were able to go to the fantastic roof top restaurant on the Galerie Lafayette
http://en.wikipedia.org/wiki/Galeries_Lafayette

The store is an amazing building in its own right and a shoppers paradise. The view from the top gave me a chance to see and photograph the remaining windmills on the hill, though the passage of time has seen the open fields succumb to the development of modern Paris.

Whilst lunching close to Notre-Dame Cathedral we took time to visit the crypt which was opened in 1980 to display the archaeology of ancient and medieval Paris discovered in the preceding decades and that illustrate the growth of the Roman city of Lutetia on the Ile de Cite in the heart of Paris.

The remains of the early city are well laid out for the visitor to get an idea of the buildings on show and their purpose with additional audio-video displays to help put them in their context. 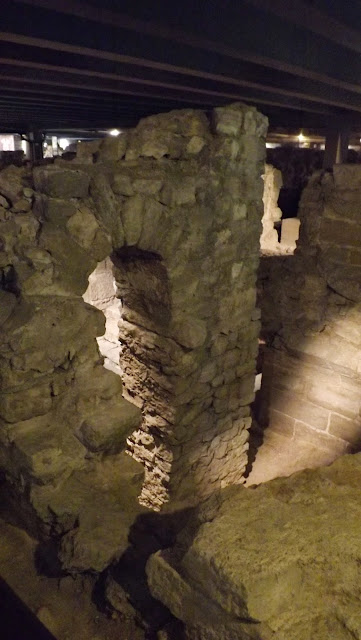 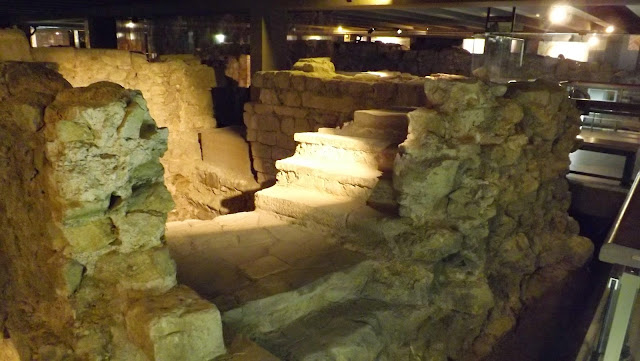 I am currently enjoying listening to Mike Duncan's new podcast covering Revolutions and we are well into the French Revolution at present. One building that gets quite a few mentions, as the guillotine feeds on the children of the revolution and heroes are interred, is the Pantheon dedicated as a last resting place and to record their great deeds only to find a new regime disinterring them once they have fallen from grace.

In more peaceful times the Pantheon is a tour of the great and the good of French modern history dating back to the revolution and although sadly having some much needed repair work done to its dome is a fascinating visitor attraction.

Having visited the Pantheon in Rome it is easy to see where the inspiration came from it its design.

Needless to say, my eye was drawn to the revolutionary and Napoleonic era pieces and those turbulent days are well captured in the monuments and artwork within. 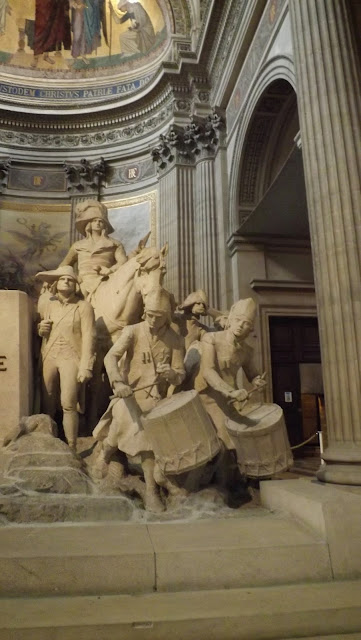 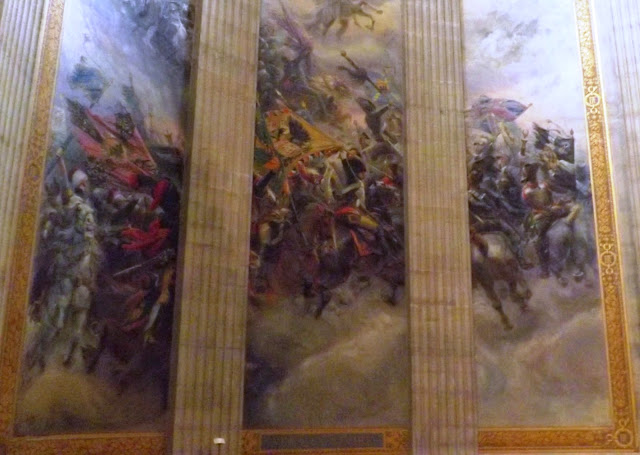 See if you can spot the various cavalry types on show. The Mameluke, the Carabinier in bearskin, the early and late period Cuirassier, the Chasseur and Polish Lancer of the Guard, the early Chasseur a Cheval in Tarleton helmet and leopard-skin turban. Alongside the single British King's Colour can be seen a captured Turkish or Mameluke standard with the crescent moon atop the pole. A similar standard was taken by the 88th Foot at Salamanca (see the link below) from a French battalion and renamed the Jingling Johnny after the noise made by the metal decoration it carried.


The very impressive statue of the very capable General Hoche, better known to British Napoleonic enthusiasts as the leader of the ill fated French invasion of Ireland in 1797.

Out of all the famous individuals buried in the Pantheon there was one tomb that I was keen to visit.

Perhaps alongside the Emperor Napoleon, Marshal Louis-Nicolas Davout and Marshal Andre Massena, Marshal Jean Lannes is rated as one of the most capable senior general officers of that period. As a personal friend of Napoleon he was granted the permission to address the Emperor in the more personal "tu" rather than "vous" and his early death in 1809 at the Battle of Aspern Essling affected Napoleon greatly, reducing him to tears at his loss. 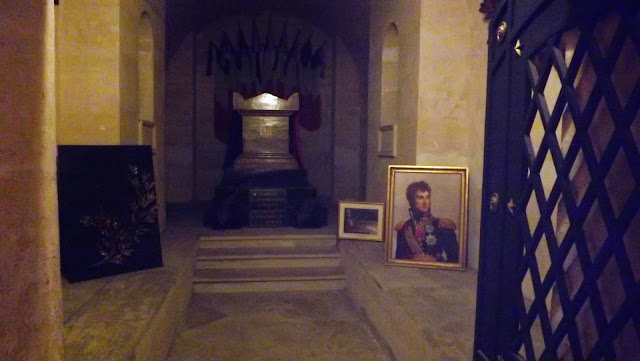 Our final day was spent looking at Empress Josephine's personal residence and where it seems Napoleon felt most at home, Chateau de Malmaison situated in the north west leafy suburbs of Paris and close to the end of the metro.

The apartments were decorated very much in the imperial style seen at Fontainebleau, that we visited last summer, but unlike Fontainbleau, Malmaison, being much smaller has the sense and feeling of being a home, where the cares of state could be forgotten if temporarily. Indeed this was the place that Napoleon headed for, following the trauma of the defeat at Waterloo in 1815, surrounded by the home created by the love of his life Josephine de Beauharnais who had died the year before. 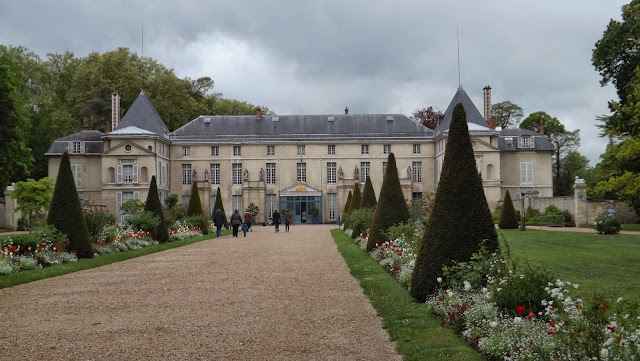 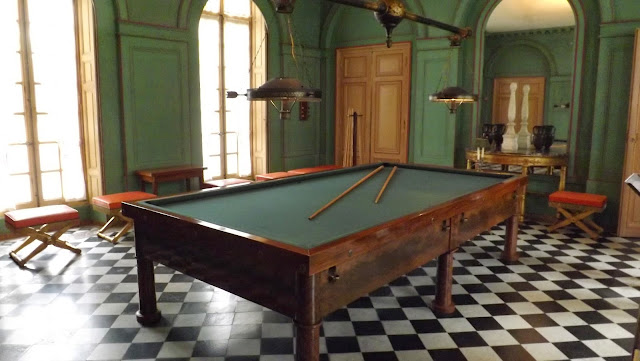 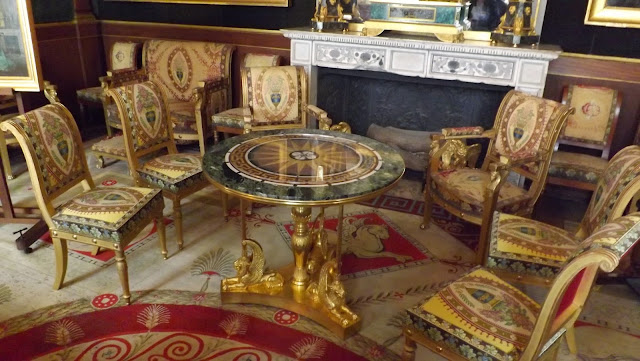 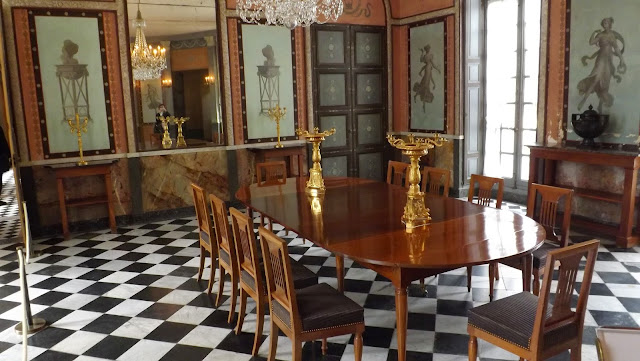 The two portraits below show the two most important women in the life of Napoleon, certainly up to his marriage to Marie Louise, the Austrian Hapsburg Princess. I have read that the two ladies did not get on with Madame Mere considering her first daughter in law not quite good enough for her son.

Josephine was described as a brilliant hostess, with dark brown hair, hazel eyes and a silky charming voice but, due to her bad teeth, very rarely smiled. She was known to like spending money and bought Malmaison in 1799 for 300,000 francs when Napoleon was away in Egypt on the promise that General Bonaparte would be easily able to cover the cost of the purchase and the many repairs needed, on his return.

The Egyptian expedition was not exactly a success and Napoleon was not too pleased to see what Josephine had committed him to on his return, but Malmaison proved to be an asset and Josephine turned it into a home.

Napoleon's mother appears to have been a very formidable lady and very influential over all her children.
http://en.wikipedia.org/wiki/Letizia_Ramolino 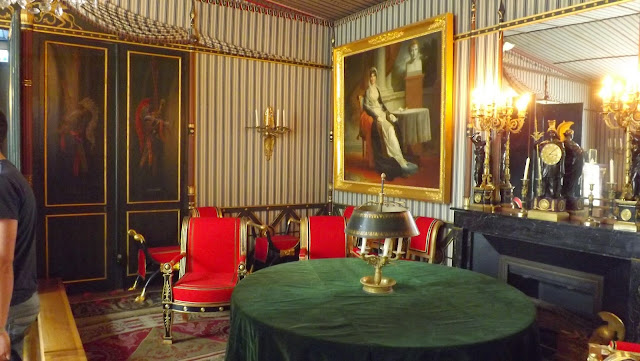 One of the rooms I was keen to see was, as at Fontainbleau, the Emperor's study and library. I would love a room like this and one can really get a sense of the man when standing in his office. 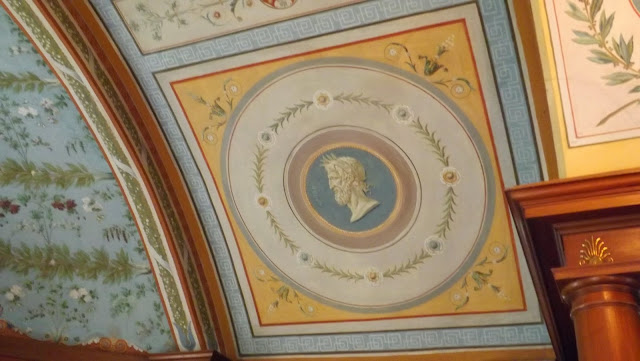 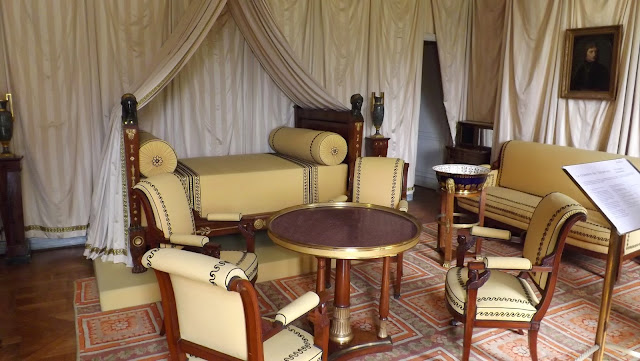 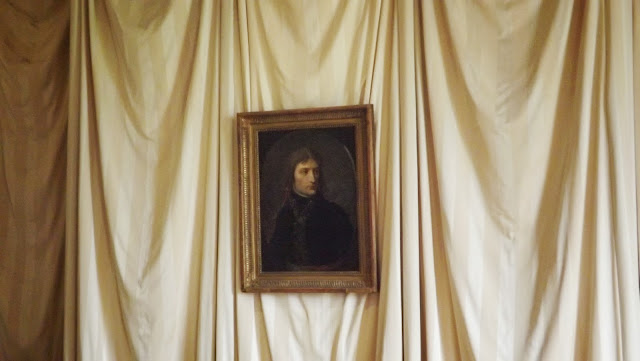 On display are some of the many sabres carried by Napoleon over the years, these examples are from the time of Marengo and Jena. 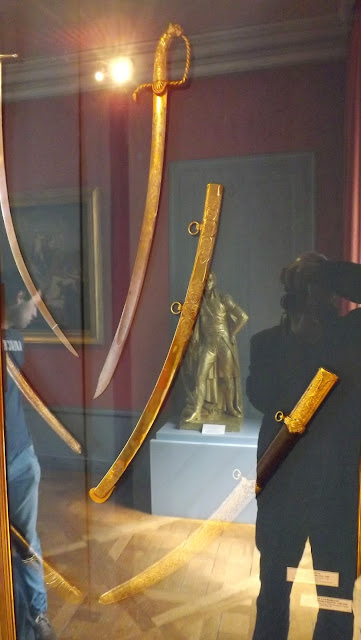 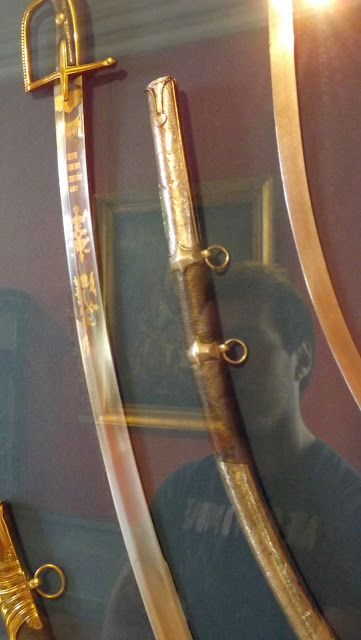 The pictures below are immediately recognisable to anyone interested in the period, showing Fist Consul Napoleon passing soldiers of the Consular Guard, and of course Napoleon emulating Hannibal's famous crossing of the Alps with his own expedition against the Austrians. 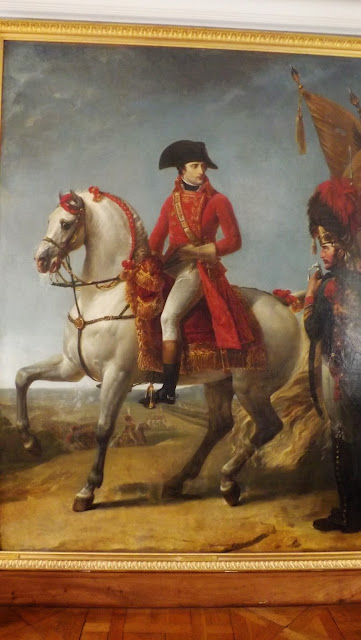 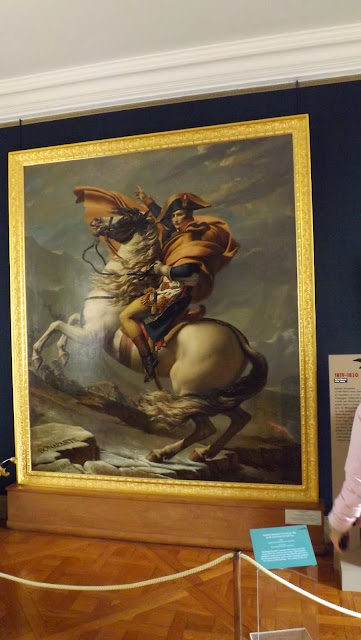 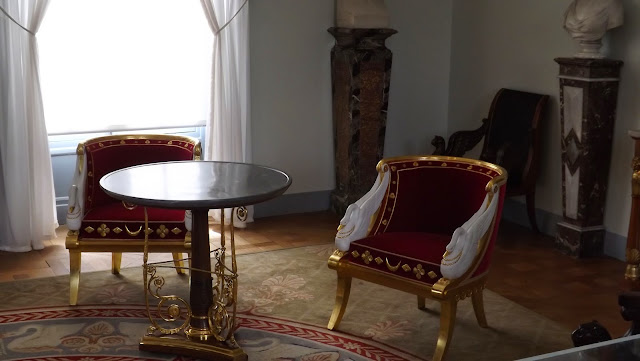 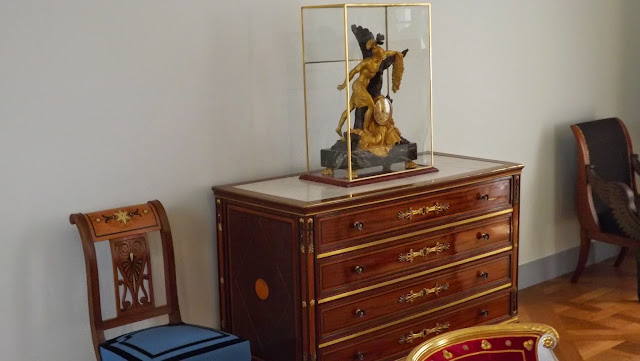 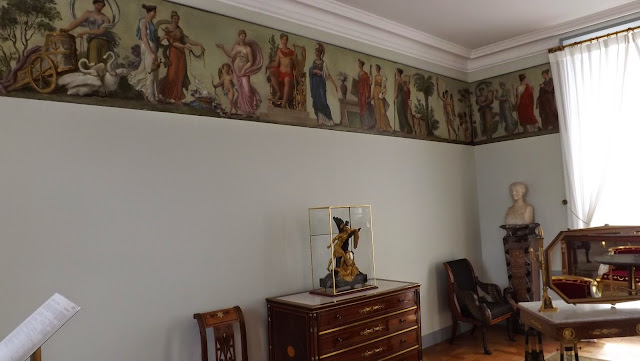 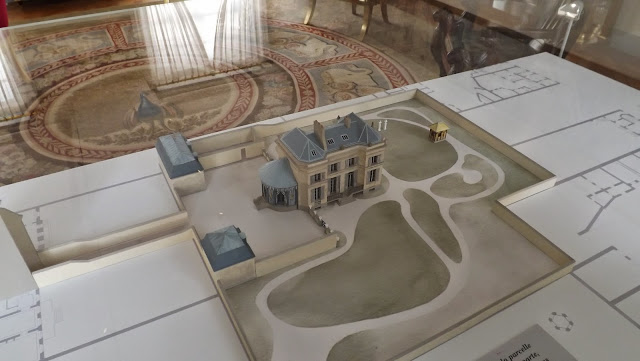 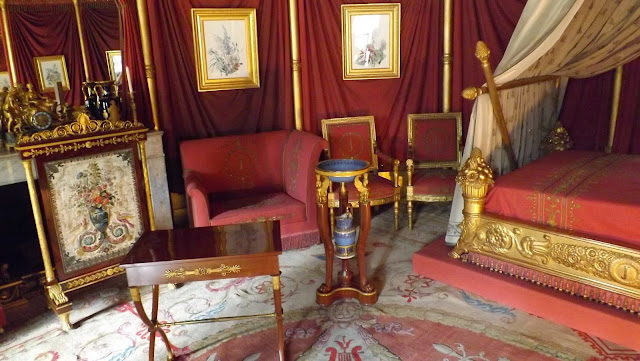 On the upper floor of the house is an exhibition of items relating to Napoleon's second abdication following his defeat at Waterloo. The plan to escape to the United States of America on the frigate La Saale is covered along with his eventual surrender to the Royal Navy after finding the port of Rochefort blockaded and preventing any escape.

Napoleon ended up avoiding certain death at the hands of French royalists and Blucher's Prussians by being taken aboard the British 74 gun ship of the line, HMS Bellerophon or as known more commonly by the men of the Royal Navy, the "Billy Ruffian".

This story has a Devon link as the Bellerophon was anchored off Torbay and Plymouth for several weeks in that summer of 1815 as the British government decided what to do with the massive problem that they had been presented with. Not wanting to allow the former Emperor to set foot on British soil and aware of the fame and celebrity his presence would attract to any republican supporters at home they were keen to pack him off to St Helena as soon as the decision was confirmed.

The display had some artifacts from the Bellerophon including a speaking trumpet, which was probably in constant use as the ships officers issued warnings to sight seeing vessels to stand off, whilst the occupants strained for a sight of the French Ogre. 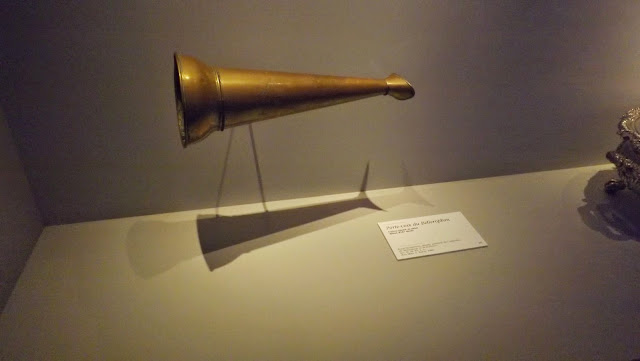 The other item appears to be a silver terrine that would no doubt have adorned Captain Maitland's dinner table as he and his officers entertained their imperial guest and his entourage. 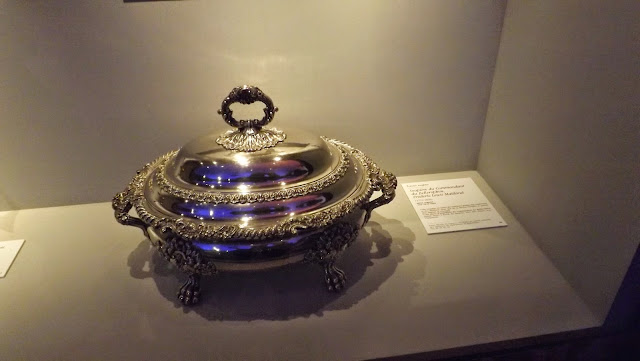 The final display was in one of the outside buildings, which had some of the last vehicles used by Napoleon, the last being the hearse that carried his remains to Les Invalides on his return in 1840.


Well I hope you have enjoyed this little travelogue to Paris that really sets the scene for our expedition in June to visit the battlefields of the Waterloo campaign. On my return it will be back to the plan with the "Talavera Night Attack" scenario to bring to a conclusion, the Vistula Lancers to complete, a new scenario, "Talavera- Pajar de Vergara", to try out at the Devon Wargames Group and a book review. So much to do, so little time!