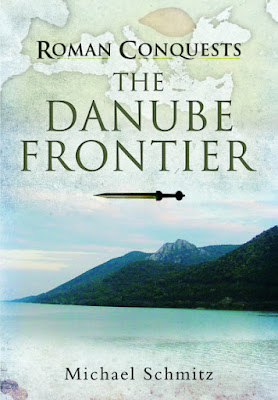 As well as indulging the Peninsular War passion this summer, I was really pleased to finally get my pre-ordered copy of this much anticipated book that I had ordered from Pen & Sword over a year prior to its publication.

Originally the book was billed under the name of Philip Matyszak who I recognised for being the author of another of the Roman Conquests series of books by Pen & Sword, namely 'Macedonia and Greece.

The fact that Dr Michael Schmitz picked up the contract to write this book after the pre-publication announcements might suggest the reason for the delay in its eventual appearance in my postbox.

With my Romano-Dacian collection front and centre of my thoughts and wargaming activity at the moment, this title certainly ticked a lot of boxes and so I was very happy to put this one in the hand luggage as we set off to catch the ferry to Santander.

My experience of reading titles looking at ancient history, given the paucity of new information, is always one of guarded anticipation with regards to discovering much more from what is already known; and I have gradually started to seek out books that look to challenge accepted ways of thinking, bringing into play the latest archaeological evidence to add support to new ideas about what might have been the case.

The campaigns of the Imperium and Trajan in particular have to be right up there when it comes to paucity of information, relying as we do for much of the academic thought about those military campaigns on two Roman monuments and so I was pleasantly surprised with how this book, looking at the wealth of archaeological data now coming out of Romania, was able to challenge a lot of wargaming preconceptions about the Dacians in particular and the threat they posed to Rome that caused the massive mobilisation of troops to finally crush them.

However it would be wrong of me just to focus on my own interests when writing about this new book as the title scans the Roman interest in the theatre and all the various groups of people that lived there from the 70's BC when the river was reached by the Roman general Curio right through to the Second Marcomannic War from 178-180 AD; describing as it does the growing interest in the lands bordering the River Danube on the modern day Adriatic coast starting with Julius Caesar.

It was Octavian who recognised the importance of Illyricum as part of of his plans to become the first de facto Emperor and later as part of the establishment of an Empire front line anchored on the great rivers of the Danube and Rhine, conducting three campaigns in Illyria himself, concluding with the Dalmatian surrender in 33 BC and returning to Rome to claim a triumph which helped bolster his standing with Rome and the army when it came to dealing with Anthony and Cleopatra in 31 BC.

Schmitz describes the three campaigns conducted by Octavian, looking at the Celtic style forces deployed by the Illyrians, Dalmatians and Pannonians, their weaponry, army make up and skill at defending against Roman siege methods.

However as the book goes on to describe, the Danube theatre and its peoples would prove an area of ongoing concern from the Pannonian Uprising of 6 - 9 AD right through, with the added concern that unlike the peoples along the Rhine, the Danubian groups seemed very willing to confederate and unite to oppose Roman will within the region, and its proximity to mainland Italy only added to those fears.

As Schmitz goes on to highlight, the Dacians stand out as the focal point of these confederations, with two Kings, Burebista (60-44 BC) and later, Decebalus (87-107 AD) able to unite the Dacians under their authority and harness that centralisation, with alliances with neighbours such as the Sarmatian and Bastarnae tribes.

He describes the social hierarchy and military technology of the Dacians combining skills in weapon and armour construction with that of building fortifications and strongpoints. This threat only enhanced by their willingness to adopt and adapt Roman technology and, through the use of Roman deserters, better train their own troops to Roman methods. 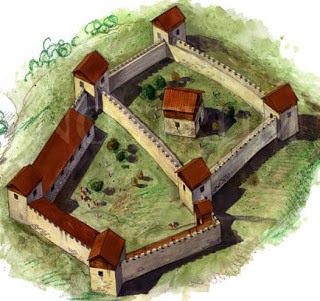 Making skillful use of the difficult terrain of the Dacian homelands when threatened with Roman invasions, punitive or otherwise, they were not averse to returning the compliment to the Empire by taking advantage of any perceived weakness on the frontier such as during Roman civil strife and the rise of Vespasian, with raiding warfare an almost continual threat to Roman held territory.

However as Trajan's column illustrates, the Dacians were not unfamiliar with siege tactics and the use of artillery and battering rams to take on Roman walled fortifications if the situation required it.

This propensity to make war on Rome and the ability to humble its armies and leaders explains why Trajan decided to deal with the problem once and for all, making the territory east of the Danube the last addition to the Empire and filling Roman coffers with the gold the country had to offer as recompense for the Imperial effort to take it.

However the former Dacian lands brought new problems to the Empire, defence being preeminent, with its landward borders facing multiple threats with easy access routes compared with the lands behind the Danube.

Schmitz goes through these issues together with the management of the Sarmatians tribes either side of the territory used to crossing it, to have formal links with one another and initially frustrated in these desires by Trajan and his successors, proving to be yet another source of raiding and war.

The territory would come under growing pressure in the latter centuries with the barbarian tribal movements giving rise to the Marcomannic Wars with both the German and Sarmatian tribes allied with others such as the Carpi and Costoboci would pose a serious challenge to Roman forces  weakened through plague decimating the ranks of the legions.

Again Schmitz goes through the events of the two wars, highlighting what is known and what is likely to remain conjecture even covering off the debate about whether we should even be referring to the Marcomannic Wars and not some other title such as the Danubian, Northern or Germanic Wars.

In his concluding chapter which rounds off the history of the Danubian frontier up to the fall of the Roman Empire, Schmitz highlights that, in spite of all the blood and treasure invested into its defence, Roman Dacia, the last conquest, became the first province lost in less than two-hundred years, delaying matters rather than solving them.

As late as 334 AD with Constantine and 359 AD with Constantius, Rome was still fighting the Sarmatian and Quadi tribes on the middle Danube, conducting huge punitive campaigns fuelled by the growth of Gothic power in the region, a presage of what was to come with the Goths themselves propelled into the area by pressure from the Huns.

The book consists of the following;

List of Illustrations (Seventeen in all with nine in colour, including several pieces of  Radu Oltean excellent artwork as seen above).
Acknowlegements
Introduction

Chapter 1    Illyricum: The Push Towards the Danube
Chapter 2    Julius Caesar
Chapter 3    Octavian's Illyricum
Chapter 4    The Danube as the Northern Frontier
Chapter 5    The Pannonian Uprising of AD 6 to 9
Chapter 6    The Dacians: an Emerging Empire
Chapter 7    The Flavian Danube
Chapter 8    Trajan's Dacian Wars
Chapter 9    Hadrian
Chapter 10  The War of Many Nations

In addition there are six black and white, very clear and well laid out maps of the region illustrating the key areas within the wider area covered in the text.

I have to say I really enjoyed this book and the wide sweep of looking at an area under Roman influence over a relatively long period of time.

I started this review by stating what, as a wargamer, I look for in books covering the ancient period and that being, ideally, a book challenging my preconceptions which I found this one does.

Most ancient rule sets group the Dacians alongside other so called 'Barbarian' warband lead armies such as the Celts, and the Germans, allowing the addition of the allies that would characterise a Dacian host such as Sarmatian cavalry.

This is all very well as far as it goes, but I think Schmitz makes a very good case that the Dacians had to be and were much more than just another warband army and their record of success against Roman field armies and the fact that Rome had to raise such large armies to deal with them indicates this.

Those added differences might include more troops having armour protection, and perhaps increased effectiveness due to Roman training. In addition the Dacians having a better understanding than most of how the Roman army fought, knew very well the best type of terrain to fight them on and would often pull back from their lowland territory close to the Danube to contest things in the mountainous regions beyond.

I enjoyed the read and it has certainly given me much food for thought on how I can look to differentiate further my Dacians from a typical 'vanilla warband' army into a force that could pose more problems for a Roman foe, giving as it does a very good read, providing a very clear narrative of the wars in the area together with an account of how the Romans coped with the foes and terrain they encountered.

At the time of writing the book has a recommended retail price of £19.99 from Pen & Sword Books but can be picked up for around £13-£16 in hardback.

https://www.pen-and-sword.co.uk/Roman-Conquests-The-Danube-Frontier/p/3842
Posted by carojon at 04:20