All at Sea - On the Stocks in JJ's Dockyard, New French Builds

Following up from my last post tracking progression with my French fleet build, the Marine Nationale have had a boost to their numbers with two third rates and three fifth rates added to the fleet and now fitted out, with one already having had its debut game as featured in my post covering another of our War by Sail days gaming covering the Battle of Cape Ortegal in 1805

If you are interested in following the progression of this project you may be interested to see that I have created an 'All at Sea' tab at the top of the blog page where you will be able to scroll down through all the posts too date.

So the first two additions are two of the three named third rates contained in the Black Seas French Fleet box which I am currently working through, namely Bucentaure and L'Aigle.

The Bucentaure gave her name to the class of 80 gun ships designed by the French Naval engineer and shipwright Jacques Noel Sane and she was the first to launch out of a class of twenty-one, rolling down the stocks in Toulon on the 13th July 1803. 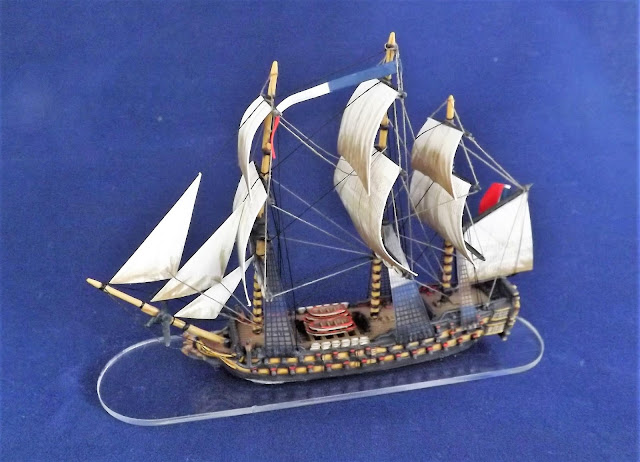 Named after the Venetian ship destroyed by Napoleon after the fall of the Venetian Republic in 1797, she became the flagship to two French Vice Admirals.

Vice Admiral Latouche Treville who commanded the fleet at Toulon after returning from the Franco-Spanish expedition to Saint Domingue 1801-1803 after having taken ill on the expedition, relapsed and died aboard the Bucentaure 18th August 1804.


Perhaps more famously, her next senior commander was Treville's replacement to command the Toulon fleet, Vice Admiral Pierre Charles Silvestre de Villeneuve who hoisted his flag aboard her on the 6th November 1804 aboard which he led the Combined Fleet at the Battle of Trafalgar.


The captain of the Bucentaure that day was Captain Jean Jacques Magendie, who saw his ship stern raked by HMS Victory as she passed between the Bucentaure and Redoutable, with his crew suffering 197 men killed and 85 wounded, including himself, out of a compliment of 888 men.


Admiral Villeneuve was lucky to survive the pounding his flagship took that day and after three hours of fighting the ship was surrendered to Royal Marines Captain James Atcherly from HMS Conqueror. 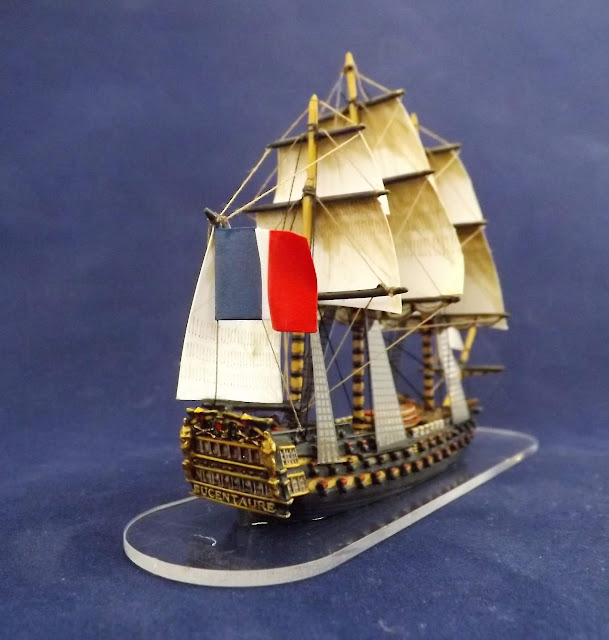 However her fight was not over, as two days later her crew rose up and retook the ship but were unable to prevent her wrecking in the gale that followed the battle on the 25th October 1805. 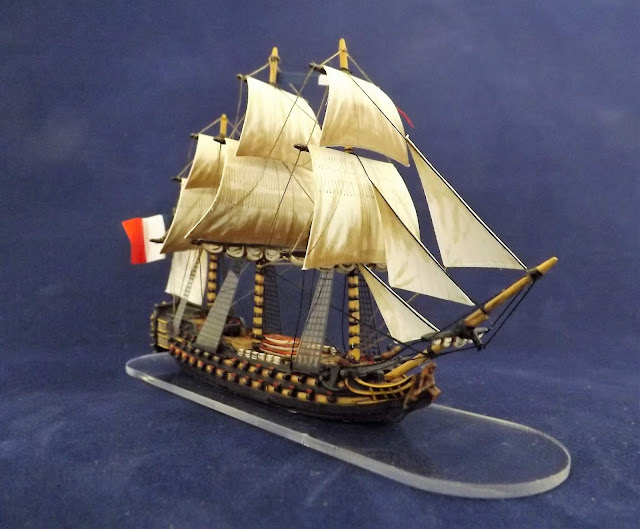 The French 74 gun 3rd rate L'Aigle (Eagle) was one of eighteen ships of a total class of one-hundred and twenty of the Temeraire Class built for the French navy, also designed by the prolific architect Jaques Sane and was launched in 1800 at Rochefort. 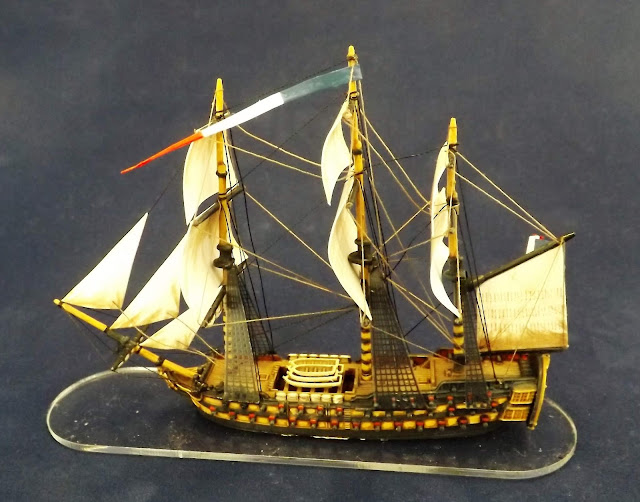 L'Aigle joined Villeneuve's fleet during his voyage to the West Indies and was with the Combned Fleet at Trafalgar. 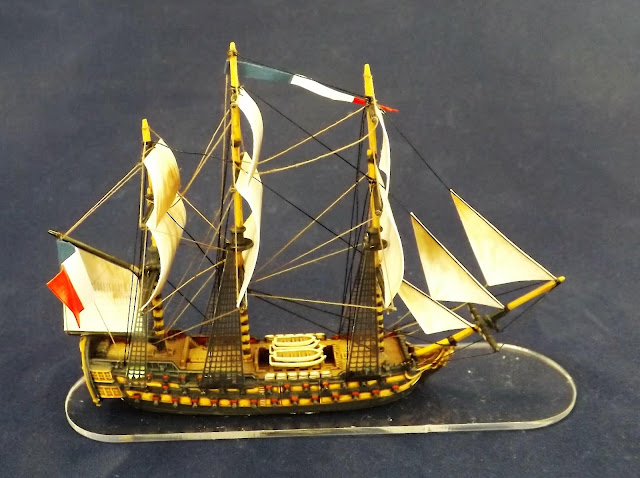 Under the command of Captain Pierre-Paulin Gourrege, an experienced officer who was promoted to captain in 1796 after previous service in the Merchant Marine he was awarded Knight of the Legion of Honour, following service in the West Indies, where he took command of L'Aigle in November 1802. 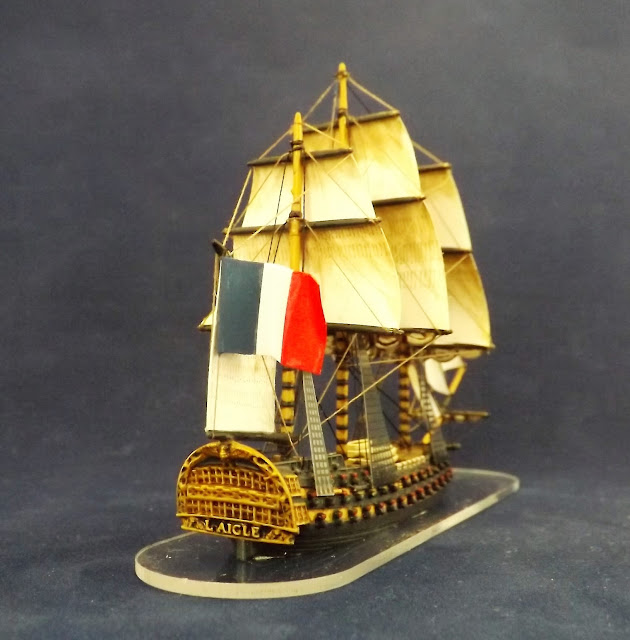 Positioned in the rear of the Combined Fleet, the ships in her part of the line were contacted by Admiral Collingwood's leeward column and surrendered to one of his ships, HMS Defiance, which sent over a boarding party, but not before 70 of her crew, including Captain Gourrege had been killed and another 100 wounded.

Like her sister, Bucentaure, her crew would rise up and overpower her British prize crew, and like the Bucentaure, she to would be wrecked in the storm that followed the battle. 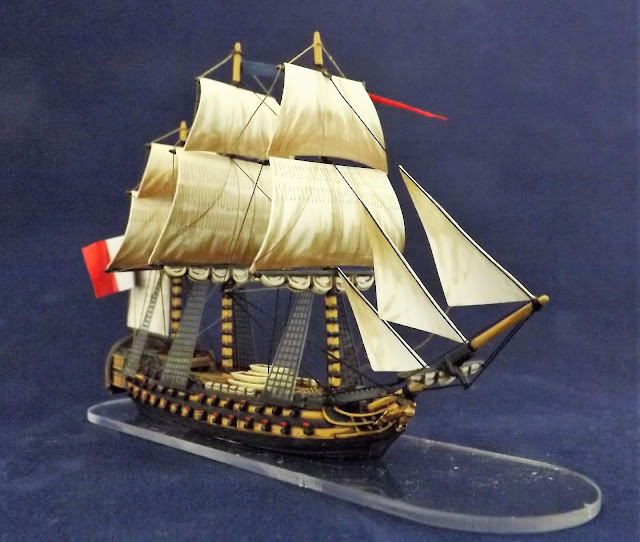 As well as the two third rates, I now have an additional three French named frigates, Comete, Themis and L'Hermione. 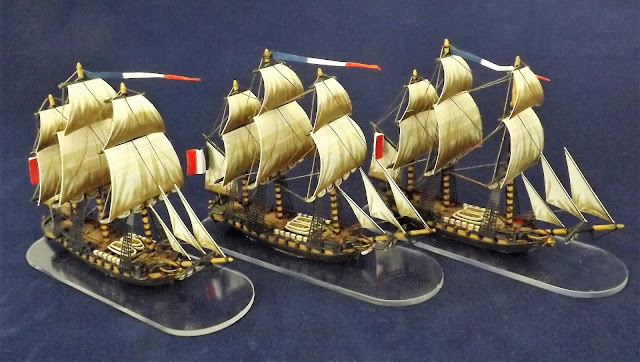 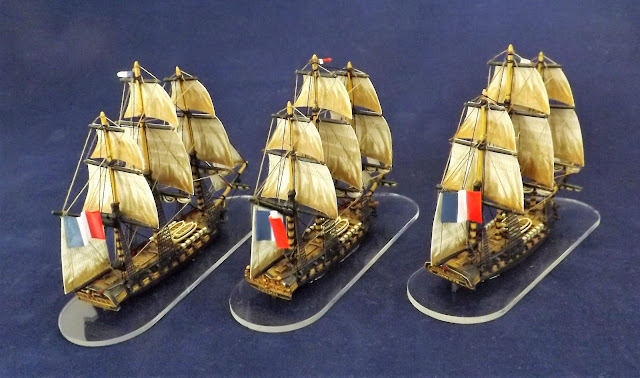 Frigate Comete was one of nine frigates of the Romaine class designed in 1794 by Perre Alexandre Laurent Forfait originally conceived as 24 pounder 'bomb' frigates armed with a twelve inch mortar placed on a swivel mount in front of the mizzen mast, together with twenty 24-pounder guns and a shot furnace, presumably to fire red hot shot!

Eventually wiser heads prevailed and the Romaine class were fitted out as standard 24-pounder frigates with the Comete being launched in Le Havre in September 1794.


We ran a sister ship of Comete in our first set of scenarios using War by Sail with HMS Fisgard taking on Immortalite and their action in October 1798, see the link below. 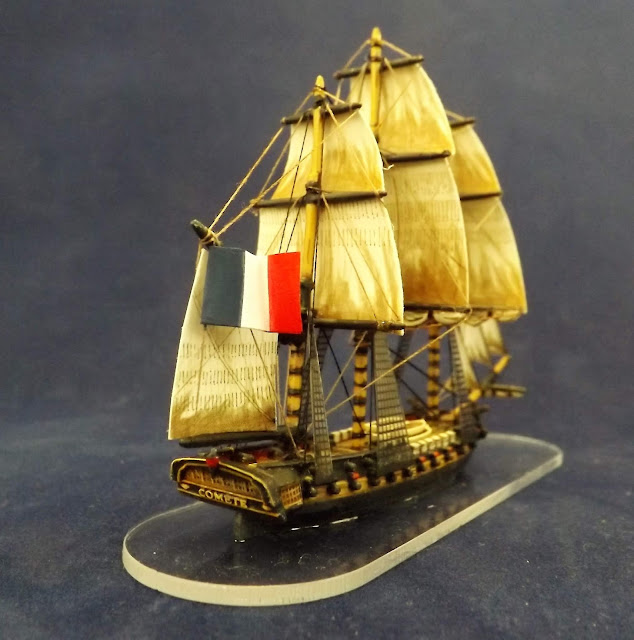 Missing the Battle of Trafalgar, Comete was very much involved in the Atlantic Campaign that followed, conducted by the French navy in 1806 and culminating in the Battle of San Domingo during which Vice Admiral Sir John Duckworth captured or destroyed the five French ships of the line under French Contre-Amiral Corentin Urbain Leissegues.

After the battle only the frigates Comete and Felicite and the corvette Diligente escaped to return to France.


The Comete finished her service in Bayonne from June 1808, used as a mast machine until broken up in 1810.


French frigate Themis was one of five forty gun ships of the Coquille class designed by Raymond-Antoine Haran and launched in 1801 at Rochefort. 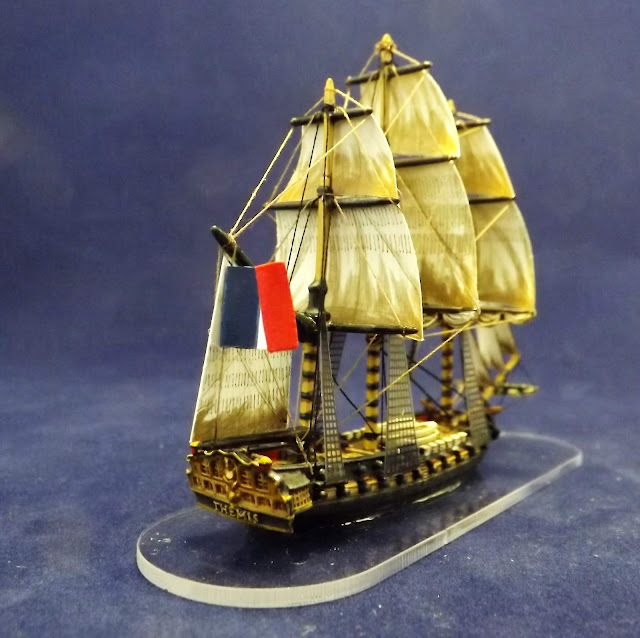 She was very much involved in the 1805 campaign, present at Cape Finisterre and Trafalgar under Captain Nicholas Joseph Pierre Jugan.


Themis is credited with towing the Spanish 112-gun Principe de Asturias, flagship of Admiral Gavina back to Cadiz following the Battle of Trafalgar.

In 1808 she was operating with the French 44 gun frigate Penelope, commerce raiding on a cruise from Bordeaux to Toulon, taking twelve British prizes on route, including the privateer Sirene.

From Toulon she then sailed to Corfu, ferrying supplies to the island and was later trapped there by the British when they finally occupied the island.

The French frigate Hermione has a famous predecessor that contributed to French efforts to support the American war effort during the American War of Independence, when she ferried General Lafayette and was the subject of a recent French built reconstruction which I think Warlord have designed their model's stern gallery around.

I however have modelled the next Hermione launched in 1804 which replaced her illustrious predecessor after she ran aground and was wrecked in 1793. 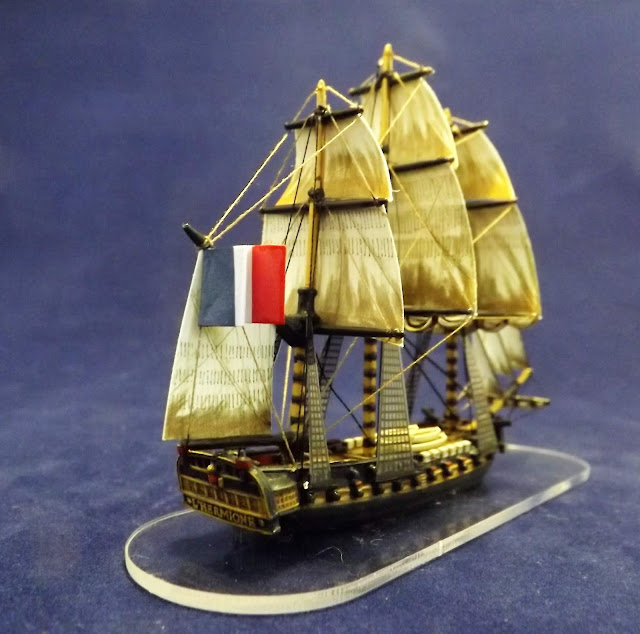 Launched in Toulon in 1804, Hermione was one of eight forty gun frigates designed by, yes you've guessed it, Jacques Sane.


Under her captain, Jean-Michel Mahe she participated in the capture of the 18-gun Brig/Sloop, HMS Cyane in May 1805 and was present at the Battle of Cape Finisterre when Admiral Villeneuve's fleet clashed inconclusively with Admiral Calder's fleet on the 23rd July 1805 and later at the Battle of Trafalgar in October that year.

In February 1806 she joined the other French frigates that survived Trafalgar to break out from Cadiz and return to Rochefort as part of Captain Delamarre de Lamellerie's squadron arriving there in the July after two of her squadron were taken by British blockaders.

In 1807 she took part in an operation to ferry troops to Martinique, finally being wrecked in August 1808 in the approaches to Brest harbour.

Next up the French 74, Redoutable and my first French first rate, not to mention my HMS Victory.