Following on from part one of this series of posts looking at some simple conversion work on the small 1:700th model, age of sail range of ships from Warlord Games, the next job was to look at the larger generic 74-gun third rate ship of the line to see what scope there was to produce a small 60-64 gun and a larger 80-gun hull by cutting and joining large and small sections of the cut 74-gun basic model.
All at Sea Conversion Work - Part One
The pictures below show the effect of doing that with the three different size hulls created together with an overview of the three types from above capturing the difference in hull length quite well.
For my project, I wanted to produce four 64-gun hulls and so by taking twelve models or four boxes of three kits, I was able to turn out four of each flavour, without any large sections of hull being thrown away.

My four 64 gun ships can be seen below with the three British and one Spaniard all rigged and ready to go.
They really stand out on the table as quite noticeably a smaller third rate and could easily stand in for some of the Dutch and Danish smaller ships of the line with anywhere from 56 to 70-guns.
The 64-gun ship of the line was very much in decline in terms of numbers built and making up the line of battle for the major naval powers of the French Revolutionary and Napoleonic period.
A difference of ten long guns, potentially five in each broadside, doesn't seem a huge matter at first examination, until the other factors that differentiate the smaller ship from its larger cousin are accounted for in that the longer hull and broader beam of the 74 facilitated not only more guns but with heavier timbers in its construction, a heavier battery on each deck; and with the larger sized ship having a higher freeboard allowing those extra inches for gun ports to be above the waterline and thus more likely to be useable in a heavy swell in which the smaller ship would often be forced to keep its lower gun ports closed.
However the 64-gun still had a role to play given its cost effectiveness as a cheaper third rate ideal for posting to extended parts of an empire in need of policing, leaving the job of protecting homeland waters to the heavier 74s and thus explaining their presence in the Spanish and British line ups for the period, and less so for the French with a much smaller overseas patrolling requirement and their more mission based approach to deploying their fleets. 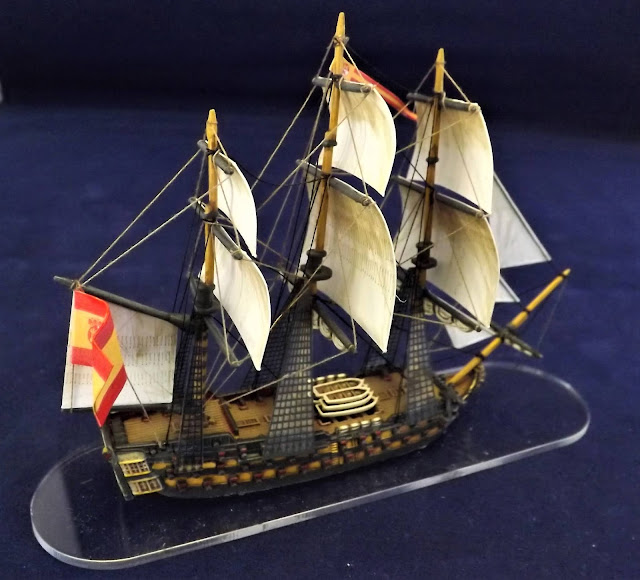 My Spanish 64-gunnner was modelled around a fairly generic look for my Spanish ships with more gold decoration that would probably be seen on a similar British type and with the classic Castilian gold lion figurehead and plenty of red on the bulwarks and rails to give it that Iberian look. 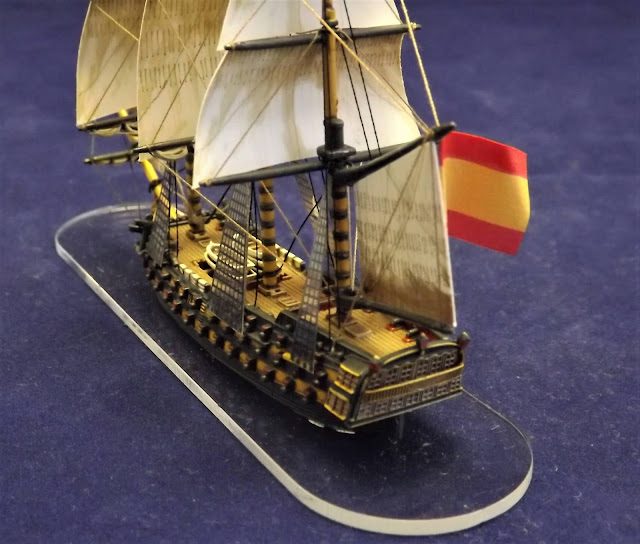 A famous example of this type of third rate in Spanish service would be the San Leandro built in 1787 and launched at Cartagena. 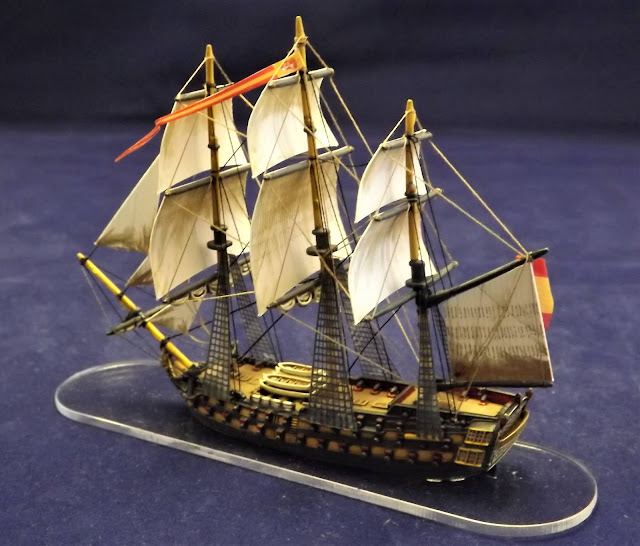 San Leandro would see action at Trafalgar under the command of Captain Don Jose de Quevado y Cheza as the rearmost ship of Vice Admiral Villeneuve's centre division at the start of the battle.
Opening fire on the British lee column, she turned back to support the Santa Anna which came under direct attack from the Royal Sovereign as the latter cut the Allied line, firing into the bows of the British ship as she closed.
By 1.30pm she and the San Justo were in action with the Belleisle and would later join the remnants of the Combined Fleet that escaped to Cadiz with just thirty casualties, which included eight killed and twenty-two wounded, and with Captain Quevedo reporting tottering main and foremasts due to shot damage, that included all the sails shot through, her rigging cut away and seven shot on the water line together with others in the side of the hull.
On the day of battle her crew numbered 606 men including 347 naval personnel, 202 infantry and 57 marine artillery and she was armed with 26 x 24 pounder long guns on her main deck, 28 x 18-pdrs on her upper deck and 10 x 8-pdrs on her quarterdeck together with 6 x 32-pdr carronades and a howitzer on her poop and forecastle. 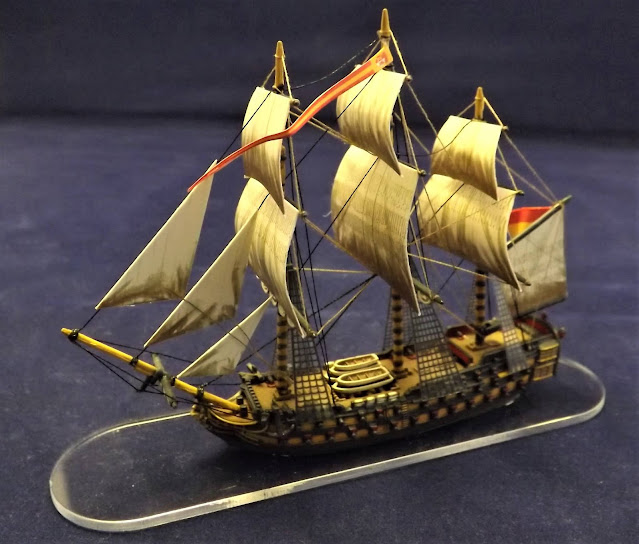 San Leandro would go on to see action in June 1808 against the French at the Battle of Cadiz, when the surviving French ships from Trafalgar were forced to surrender to Spanish forces. For my British 64's I went for a more typical yellow ochre feel to the decoration style and settled on some famous types to choose suitable figurehead and stern gallery fit outs, such as Nelson's favourite ship, HMS Agamemnon seen below. 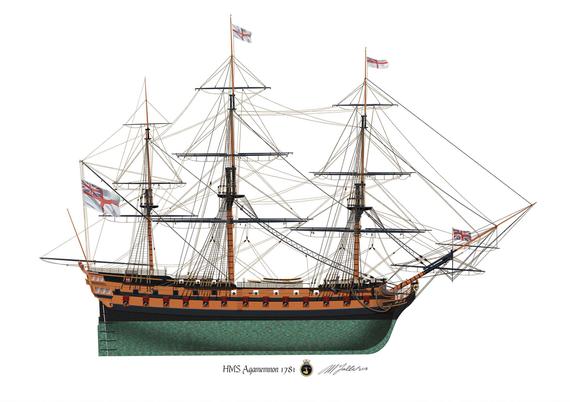 So my model is a sober looking British man of war with a suitably Greek looking warrior as the figurehead.
Of course these models are part of a specific build requirement but now the 64-gun cutdown has been mastered my mind is turning to producing several more of this type with possibly a lateen rigged  mizzen mast arrangement to fit out some French and British types for some AWI period squadrons I have in mind - more anon! 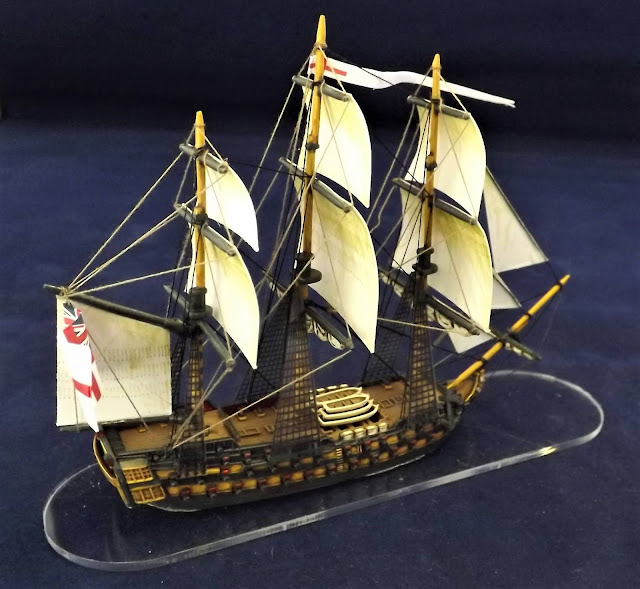 At the Battle of Trafalgar the British fielded three 64 gun ships which along with the Agamemnon under Captain Sir Edward Berry, included HMS Africa under Captain Henry Digby and HMS Polyphemus under Captain Robert Redmill. 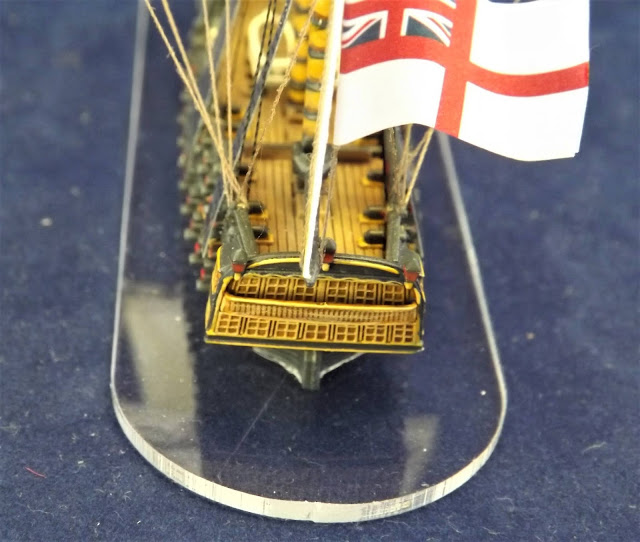 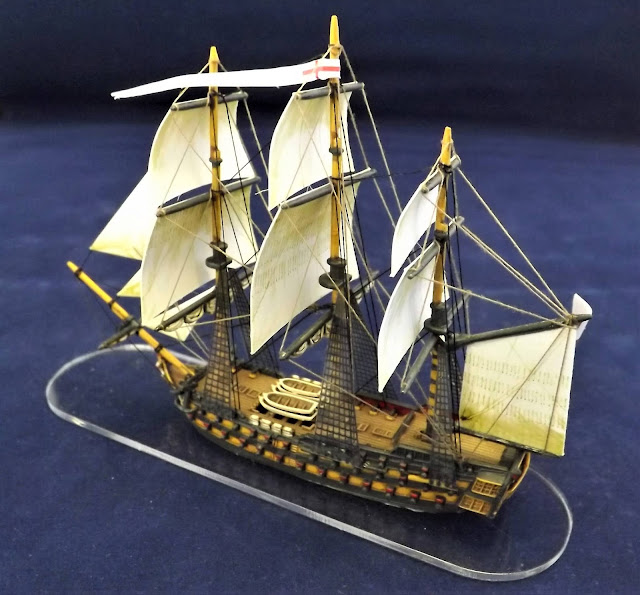 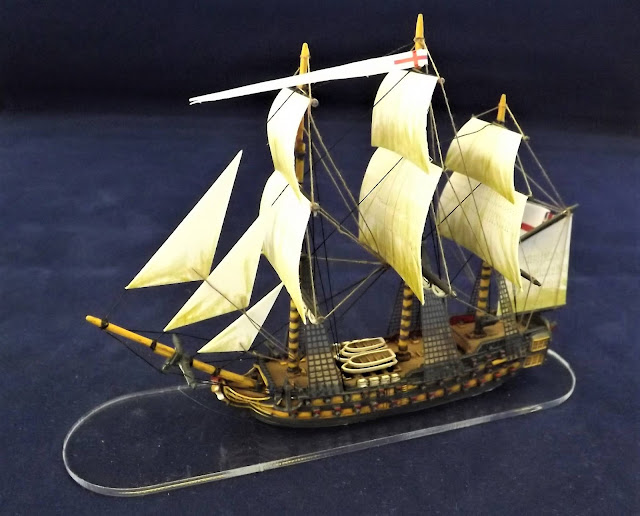 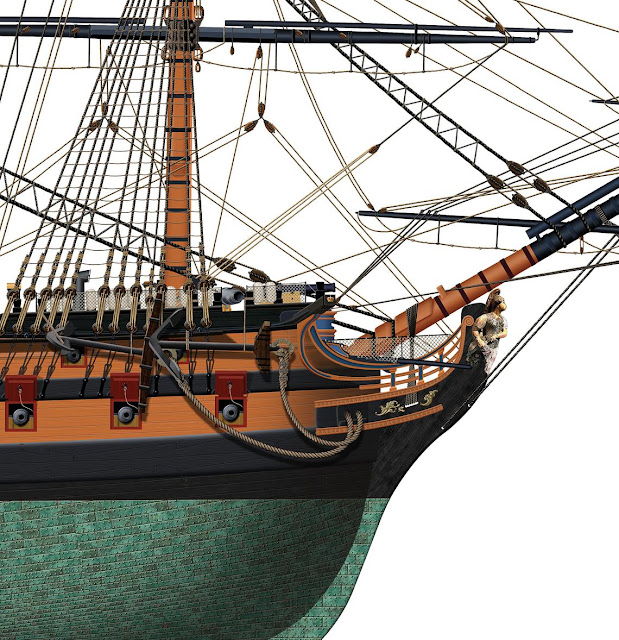 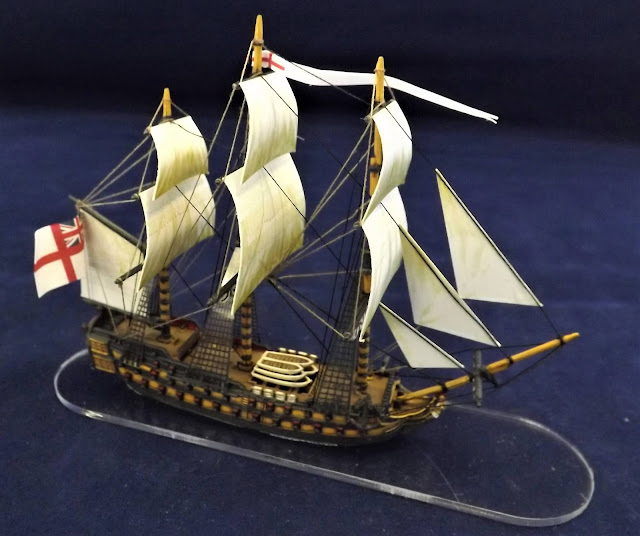 So with the 64-gun ship of the line problem rectified I'll next talk about the 80-gun variety in my next post.
Postscript:
Conversion work can be great fun and very gratifying to produce something that fills a gap in a planned project. Since doing these relatively simple builds I am now starting to look at some other models that form part of a second planned project following the completion of this one.
These 3D print resin models have been sat on my table for several months as I considered how best they might be used.
They are 64 gun ships, but I found their dimensions disappointing in comparison to my plastic varieties and so have set about converting them into a fourth rate 50 plus gun ships, requiring the hull to be modified for the rigging and four sets of masts to be constructed to replace the rather clunky and unsatisfying 3D printed versions, to which I will use card sails rather than the thick resin offerings that came with these hulls.
Sources consulted for this post:
The Trafalgar Companion - Mark Adkins
https://www.todoababor.es/datos_docum/arm_nav_traf_vent.htm
https://www.todoababor.es/datos_docum/arm_nav_traf.htm
https://www.todoababor.es/articulos/epilogo-partetleandro.htm
Next up; I have a book review, a Vassal report looking at Steve and my game of Rommel in the Desert this time playing Gazala 1942 and the All at Sea series continues with a look at the 80-gun ship conversions.
Posted by carojon at 01:22