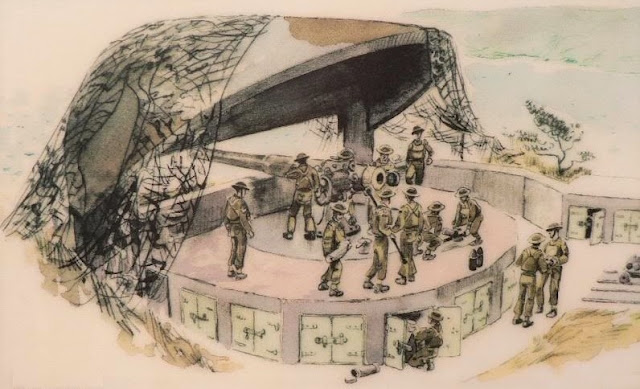 As many of you will know, I very much enjoy combining as many pleasant hobby activities as I can, and with a hobby like historical wargaming, that opens up huge opportunities, two of which include getting out walking and enjoying copious amounts of fresh air together with taking in places of historical interest, and the south-west of England has lots of places that help tick both those boxes.
If you want to get an idea of what I'm talking about, just click on the link in right hand bar or below which will take you to multiple different posts looking at amazing countryside and wildlife that typify this part of the world
http://jjwargames.blogspot.com/search/label/Devon%20Sites%20and%20Wildlife
The suggestion to do the Froward Point Walk as shown in the map below from the National Trust page, see link at bottom, was Carolyn's based on feedback from work colleagues who had done it and enjoyed the walk.
As well as enjoying walking a section of the South West Coastal that I haven't done before, the route led to the Brownstone Gun Battery that during WWII guarded the approaches to the important naval harbour of Dartmouth and Kingsbridge, which was right on the front line during the struggle to control the English Channel as well as an important departure point for US troops heading to the Normandy beaches for D-Day.
That role in support of the Allied landings included the training and run up to June 1944 when US troops practicing a full scale exercise ahead of them, Exercise Tiger on the 28th April 1944, specifically for the troops destined to land at Utah beach were attacked at night by German E-boats operating out of Cherbourg.
Two of the eight LST's were sunk that night and resulted in the loss of 630 US servicemen, and seeing survivors of the action limp back into Dartmouth the following morning, with casualties exceeding those suffered by those same units landing on Utah beach on June 6th 1944.
Dartmouth has always been an important naval anchorage since the founding of the English navy under King Henry VIII, although today is mainly concerned with tourism and pleasure boating, but navigating the rocky coast that mark the approaches to the mouth of the River Dart has always been important to mariners and thus the walker of the path out to the cliffs is greeted by a reminder of that fact with the imposing structure that is The Daymark.

Built in 1864 as a navigational aid to mariners, The Daymark is an amazing structure, built solidly to withstand the elements atop its cliff-top perch and I would imagine still a useful reference point to those at sea today. 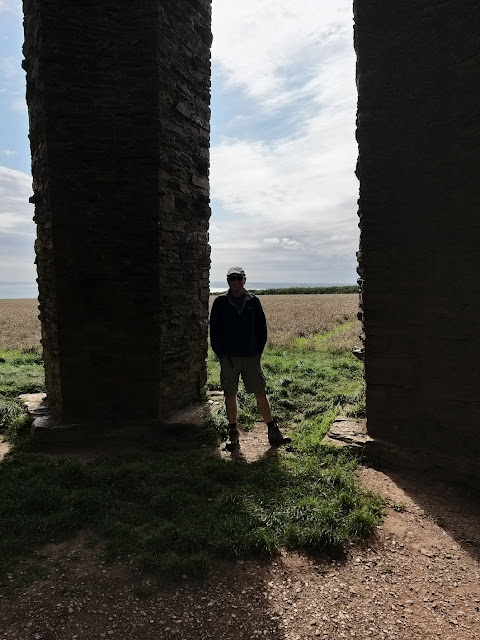 After wandering around The Daymark and admiring such a remarkable structure, we were back on the track now heading slightly downward as we started to get nearer to the cliffs. 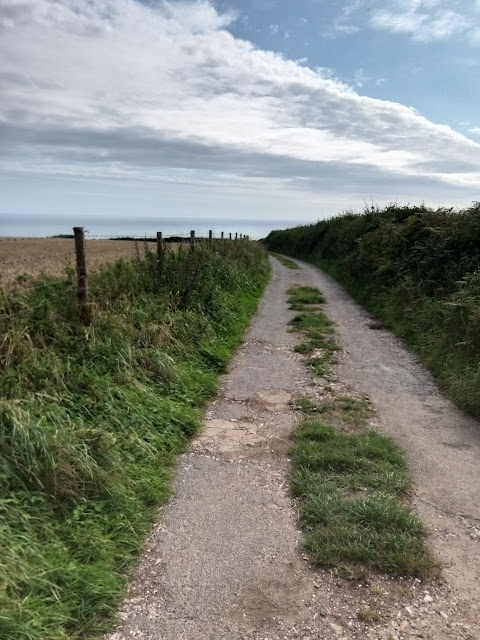 The sun in late August early September is already seemingly lower in the sky and glistened off the sea as we got nearer to Froward Point and the curve in the coast line as it nears the mouth of the Dart.

The track down to the cliffs is the original military road that service the battery and after a turn in that road the walker is greeted with a series of old brick buildings one of which has been recommissioned as a Coastguard lookout post. 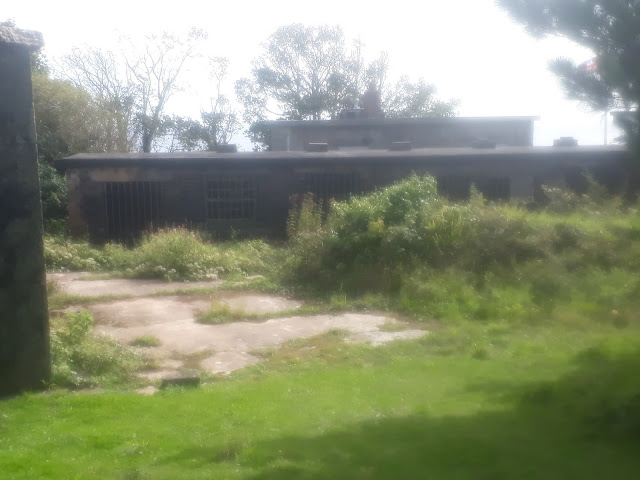 Crew accommodation blocks and munitions stores with protected ways leading from them down to gun positions are still in situ and give a vivid impression of the position as a military strongpoint. 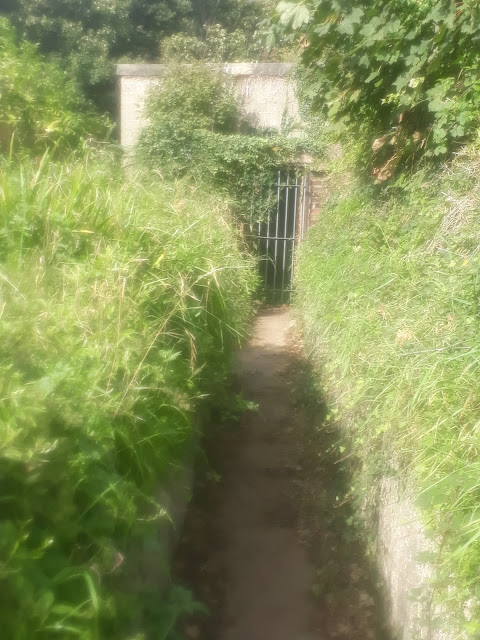 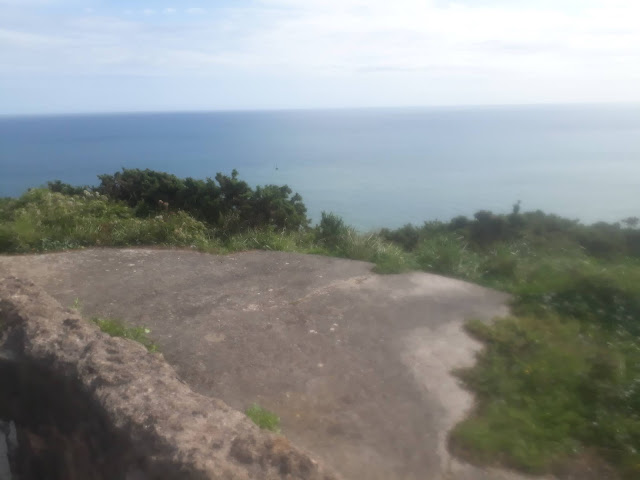 Leaving the first position and following the path down the cliffs to the second mount, we came across large pieces of iron work embedded in the path one of which is the breech mechanism from one of the six inch guns bearing the cut marks from the tool that cut them up in 1956 and saw most of the pieces simply tipped over the cliff into the sea below. 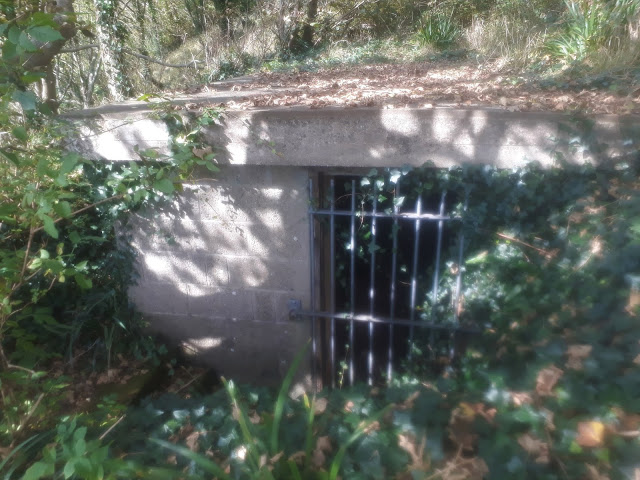 The second position was originally serviced by a munitions store higher up the path with a purpose built light rail to roll ammunition trucks along down the gun below. 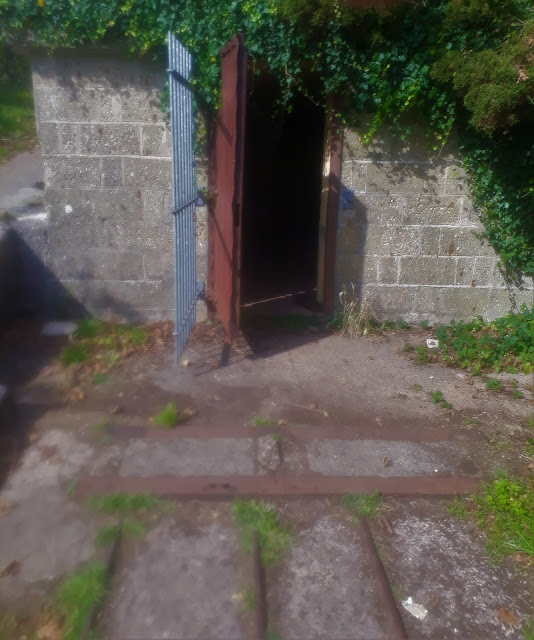 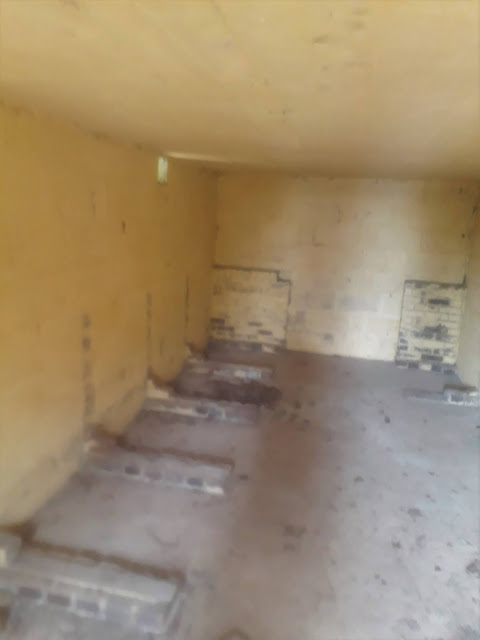 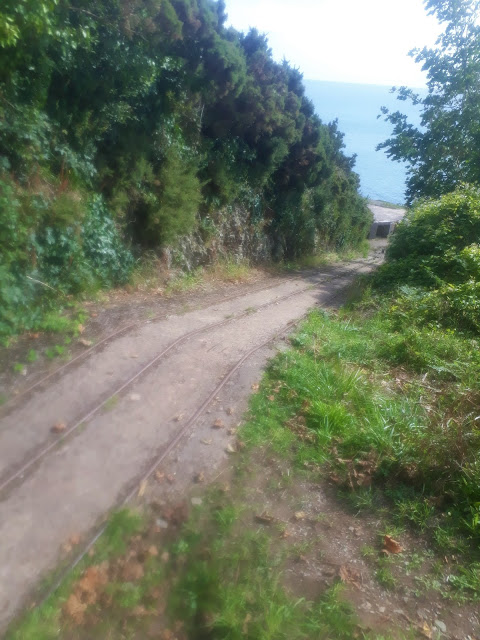 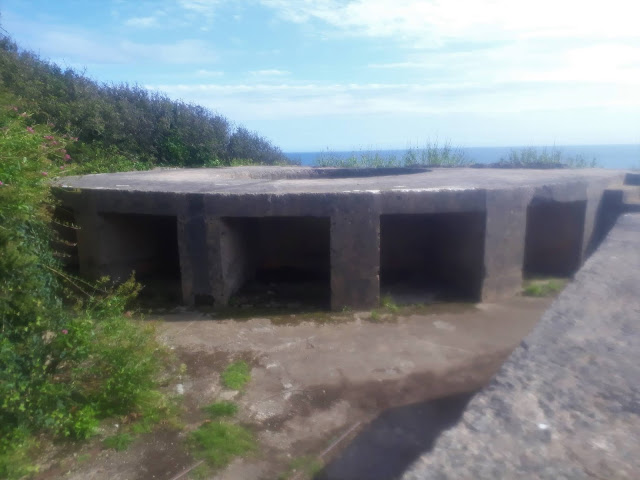 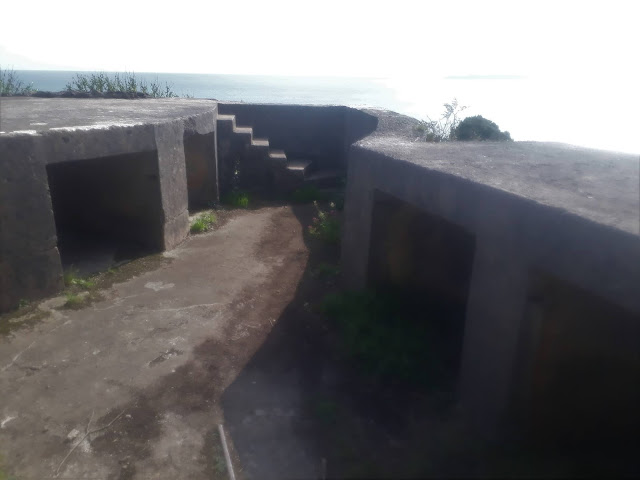 Looking down the cliff from the second gun position the roof top of the searchlight bunker below hove into view. 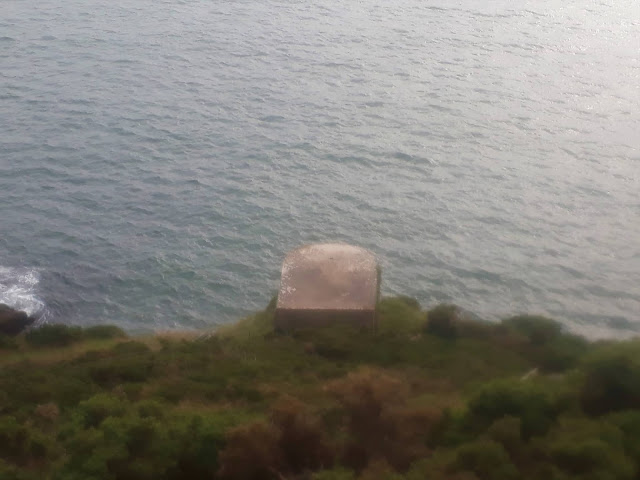 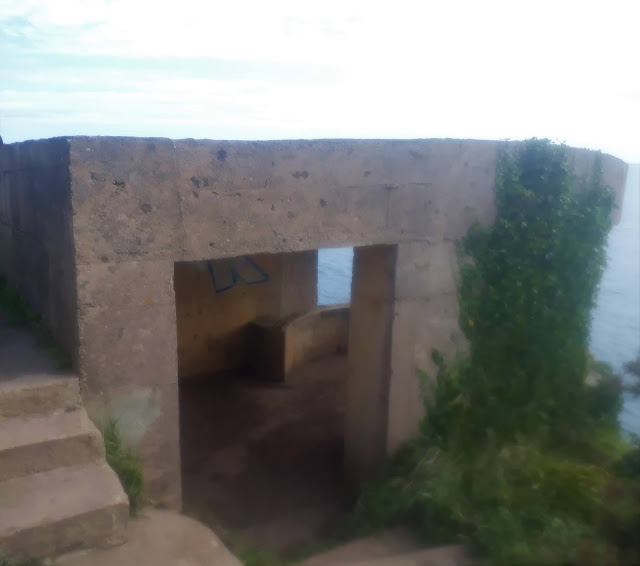 The illustration from the information board close by gave a ready impression of searchlight gunners clad in greatcoats lighting up unidentified traffic on the waters below as motor torpedo boat flotillas made their way to and from the Channel battleground beyond from their Dartmouth moorings. 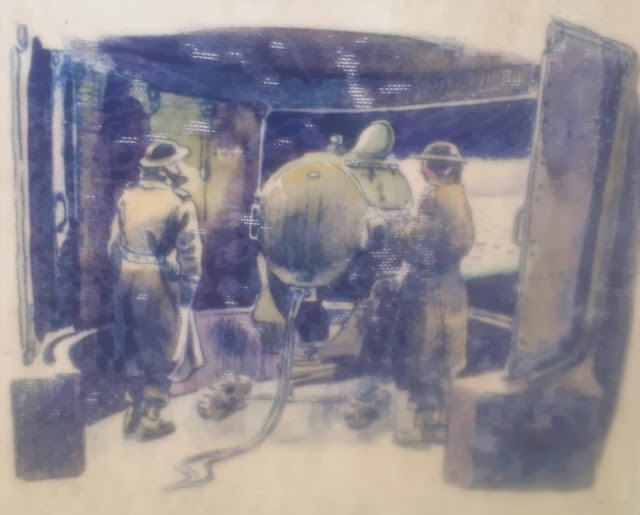 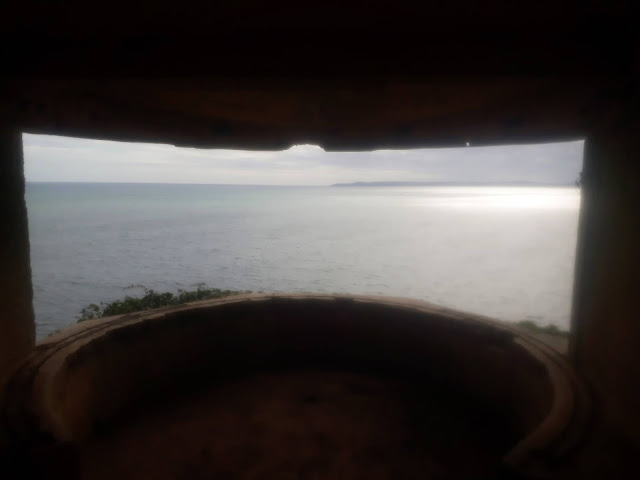 With our tour of the old coastal gun position complete we began the uphill-downhill trek that is the coastal path with the cliffs of granite so different from our local red sandstone around Exmouth, just a few miles down the coast. 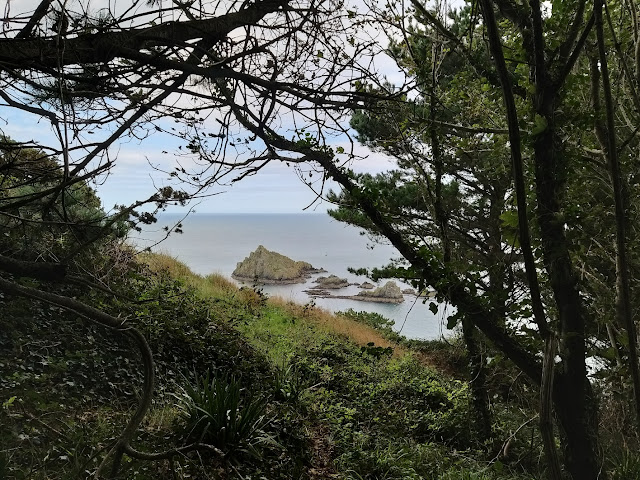 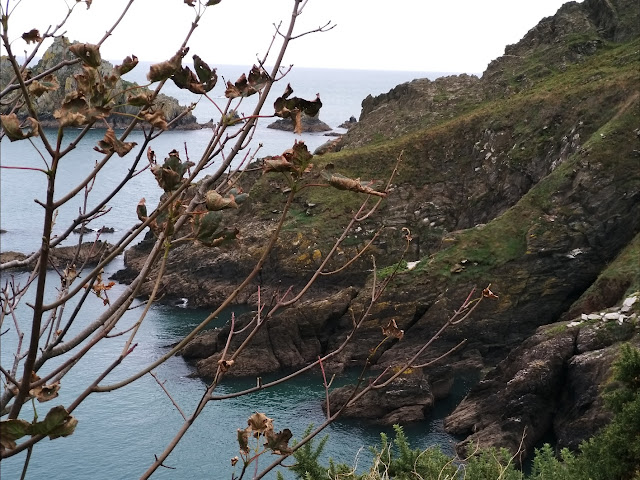 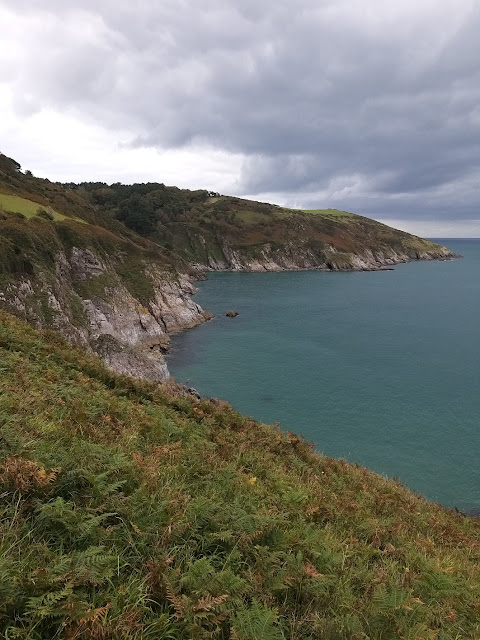 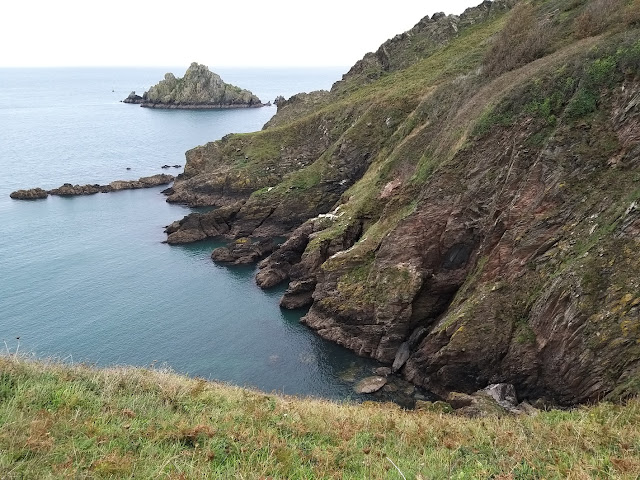 The path was described as easy going in the notes on the walk, but I have to say there was a fair few climbs and descents along it that would challenge less regular walkers culminating in a steep climb back up the cliff to follow the path back to the car.
That said the South Hams coast is beautiful when the sun is shinning and no finer place to be with a light picnic to compliment the views and a good walk either side to earn it. 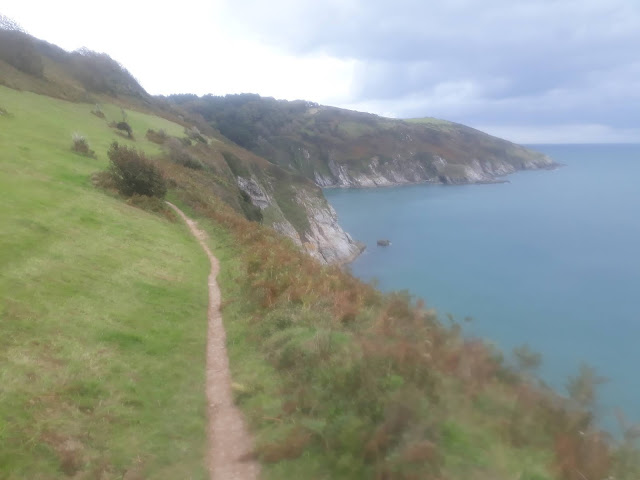 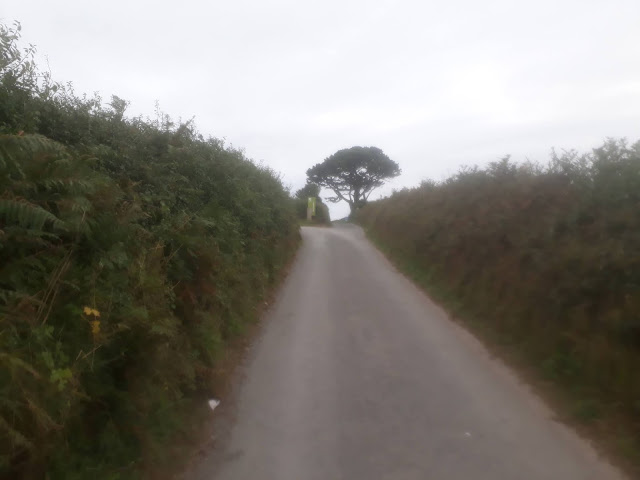 If you fancy an afternoon out exploring Devon's wartime past and the glorious coastline of the South Hams you can find links below that give more details of the route we followed and the history.
https://www.nationaltrust.org.uk/brownstone-and-coleton-camp/trails/froward-point-walkhttp://ww2f.com/threads/pics-6-coastal-battery-devon.30499/

Next up the British Third Rate of Renown that was the large class of 74-gun ship of the line, HMS Revenge, another book to review, and lots of fun with Mr Madison's War on Vassal.