All at Sea - On the Stocks in JJ's Dockyard, Spanish Builds Part Eight 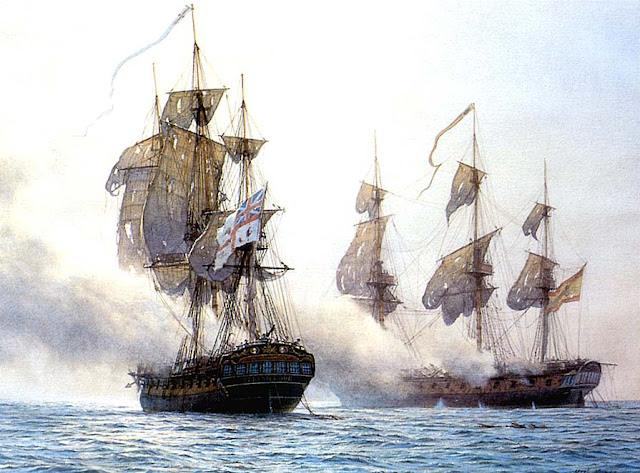 The Spanish Mahonesas class frigate Ninfa was built in Port Mahon sometime in 1794 and launched the following year. 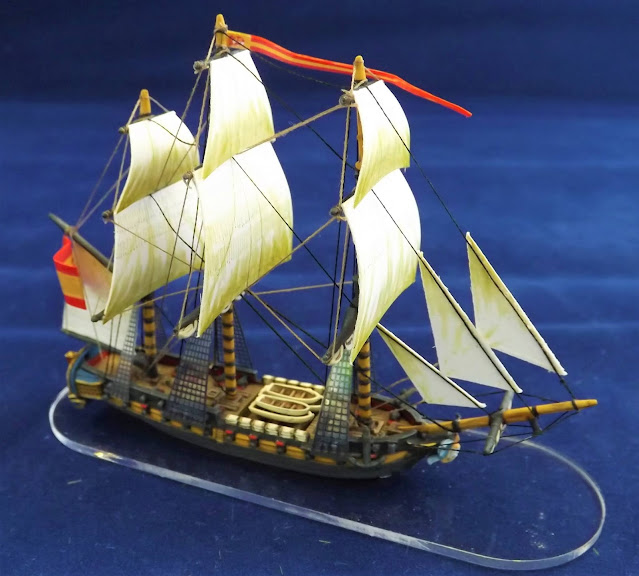 Not much seems to be recorded about her early career, up until her capture by the British on the 26th April 1797 when she in company with Santa Elena, another 34-gun frigate, were intercepted off Cadiz carrying treasure back from Havana in Cuba. 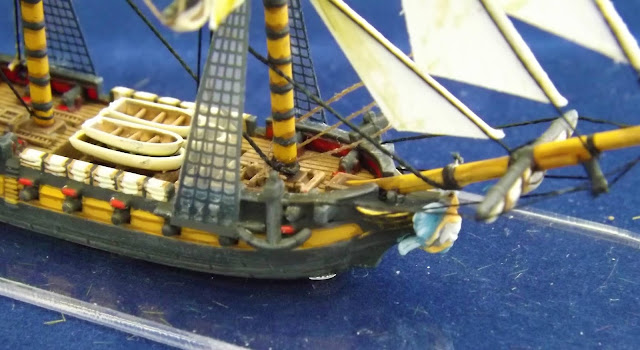 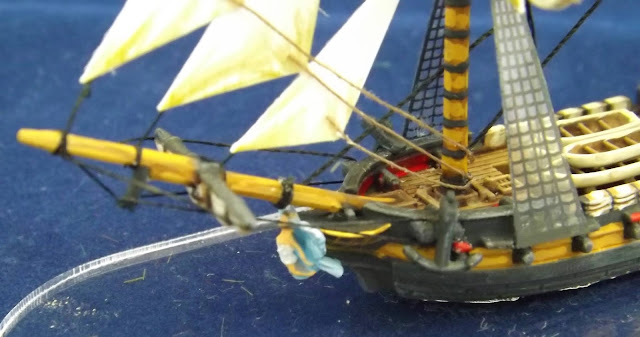 The two Spanish ships, attempting to enter the Spanish naval base, were spotted by the outlying ships of Admiral Jervis's, now Earl St Vincent's, British blockading fleet, after his recent victory over the Spanish fleet at the Battle of Cape St Vincent in February of that year and their retreat into Cadiz following it. 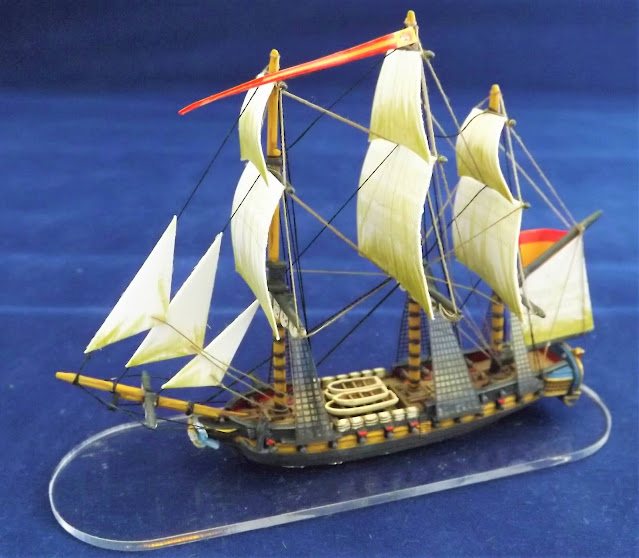 However the two Spanish frigates had been fortunate to have met with local fishing boats who warned them of the danger and took the treasure off them to land it unbeknown to the British force before they were attacked. 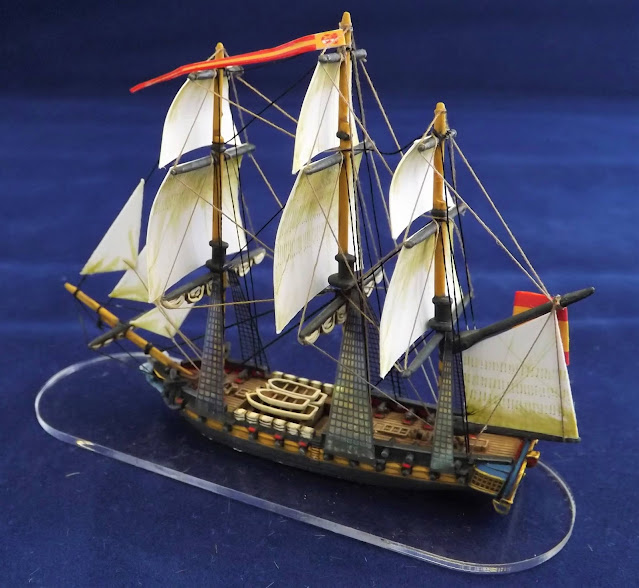 After being spotted the two frigates were pursued by HMS Irresistible 74-guns and HMS Emerald 36-guns (Captain Velters Cornwall Berkeley) under the command of the captain of the Irresistible, Sir George Martin, and they took shelter anchoring amid the rocky approaches to Conil Bay hoping the rocky shore would deter the pursuit but preparing to resist them should that fail.
Successfully negotiating the large rocky outcrop at the head of the bay known as the Laja de Cape Rocha the British ships engaged broadside to broadside as the outgunned Spanish frigates fought a ninety minute action but were forced to strike at 4 pm with Spanish casualties recorded as eighteen killed and thirty wounded. 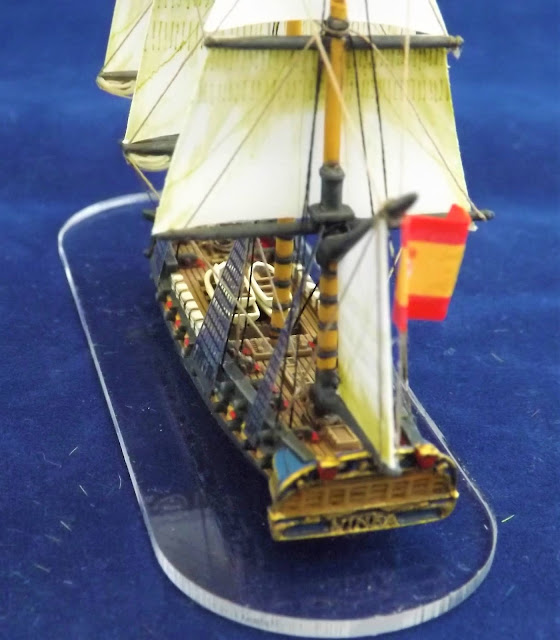 As the British attempted to take possession of their prizes, the crew of the Santa Elena cut their cable and their ship drifted onto the rocks, where all the remaining able-bodied crew escaped ashore, leaving their ship to be towed off the rocks by the British, but sinking later from the damage.
The Ninfa however was captured and was purchased for the Royal Navy, being renamed HMS Hamadryad of 36 guns under Captain Thomas Elphinstone, operating out of Gibraltar and taking two Spanish privateers in her short career before sinking in a storm in Algiers Bay on 25th December 1797 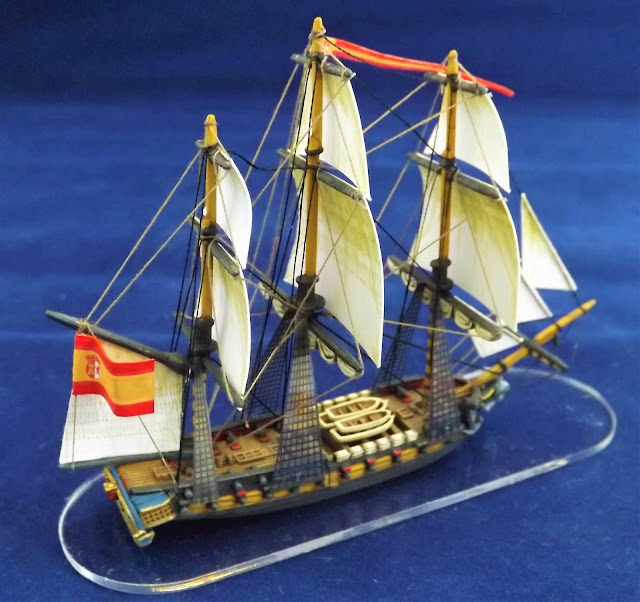 Sources referred to:
History of the Royal Navy - William Laird Clowes
https://en.wikipedia.org/wiki/Spanish_frigate_Ninfa_(1795)
https://en.wikipedia.org/wiki/Action_of_26_April_1797
https://threedecks.org/index.php?display_type=show_ship&id=13070
That concludes the build of the principle ships in the Spanish fleet box, which will also see the completion of some Spanish brigs in time, but next up I have my Spanish and French corvettes and work is ongoing with the Third Rates of Renown, British, French and Spanish, before I move on to do some more scratch builds.
Posted by carojon at 22:45