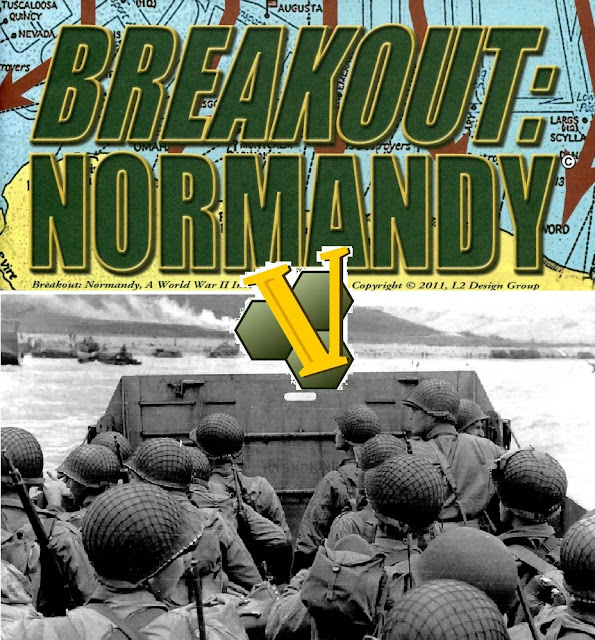 So Steve M and I continue our second game of BKN with Steve, this time playing the Allies.
My Previous Post - BKN, Game Two left the game delicately balanced with a solid German defence on the flanks of the Allied beachhead on D+1 but with the centre looking decidedly fragile for the Germans, with the British 50th Division having broken through to Villers Bocage and the defenders of Omaha  pushed back off the beach and left spent and disrupted with little hope of succour other than to blow bridges and delay the likely US advance.
So as indicated in my first post, the game was an an interesting position for the start of D+2 with the Germans needing to delay as much as possible to allow reserves in the centre to close up without getting dealt with in detail by Allied spearhead units and their massive preponderance in naval, artillery and air assets.
June the 8th D+2 was a long day for the Germans, under clear skies as they pressed the Allied flanks as hard as they dared, but suffering around Omaha as the US 2nd and 29th Infantry Divisions pushed on to link up with Utah Beach in Carentan and with the Canadians able to force their way into Caen
Steve, playing the Allies, was finding the pleasure and the pain of BKN with lots of things to do, but never quite sure how much time was left in the day to do it, and so as the day threatened to end and following naval and artillery barrages, the 3rd Canadian Infantry Division forced its way into Caen.
June 9th was forecast as overcast and rainy which would keep the Allied fly-boys on the ground and give a chance for the German defences to regroup after a difficult two previous days.
Despite the change in weather the Allied reinforcements keep on coming and despite Pont l'Abbe falling to the advance of the Cherbourg garrison following up its artillery barrage with an assualt by two Coastal Divisions to clear out 82nd Airborne, the US troops kept up the pressure from Omaha taking Catz and moving into St Lo, leaving the German defences in both areas in tatters.
Similar to the US sector, the British/Candian sector saw 6th Airborne finally ejected from Merville but in response the 51st HD drove through to Balleroy with infantry and armour leaving the Allies with 5VP contesting both Caen and St Lo with three days of the week still to play - Oh dear how sad, never mind.
So things are looking extremely tough for the Germans to resist an Allied win in the first week, but it's not over till its over and the final post in this series will show how our game finished up.
Posted by carojon at 05:55