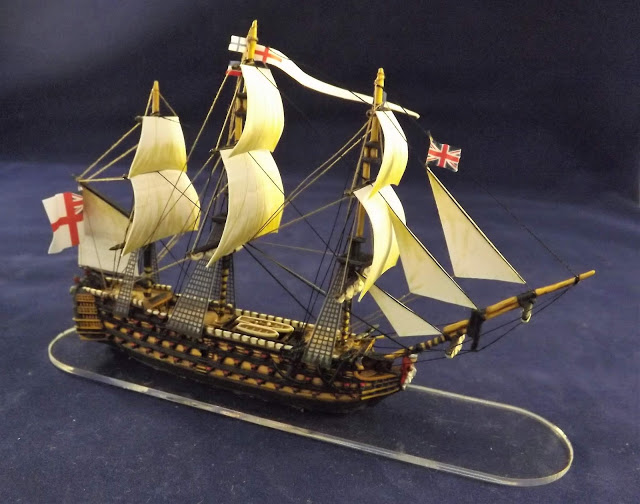 Following on from the first video looking at fixing the standing rigging to these 1:700th model Napoleonic ships, I finish off the model by rigging it as a British 74-gun ship of the line.

All at Sea Rgging Tutorial Video - Part One, Standing Rigging

Fixing up running rigging to these models can really take them to another level in terms of the visual appeal and help give a great impression of perhaps the most technical war-machine of their age with a seeming myriad of lines allowing the crews to control the ship With sail settings appropriate to the weather and battle conditions.


Of course we are not looking to recreate the rigging as a whole, but simply give an impression of it, and this can be achieved by adding the lifts and braces associated with the running as opposed to the standing rigging, covered in part one.

British style running rigging is unique to British and some American ships in that the braces, the lines leading from the ends of each spar or yard, always lead back to a common fixing point behind the mast on which the yard is on.


As you will see, the sequence of rigging each mast, starting with the mizzenmast follows a similar pattern with the start point being the creation of the top yard lifts and then leading the ends of the line back to a fixing point and then back to one of the lower yards to create another set of braces and lifts, before bringing both ends of the line to a common fixing point in terms of the foremast or the hull anchoring points on opposite sides of the hull in terms of the mizzen and mainmasts. 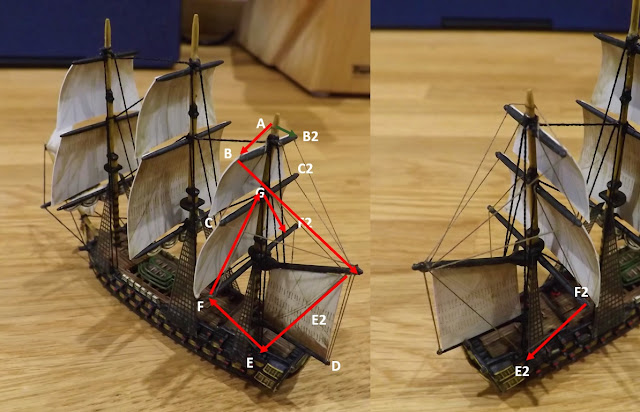 In this and the previous video I have made errors in setting some lines, not having rigged any models for over two weeks before starting these, and a process I had got to an unconsciously/competent level of performing, having built lots of ships in the previous months, is now slightly back in the consciously/competent zone, where more thought is required to complete the process without error.

Perhaps that’s not a bad thing as these tutorials will most likely be of most use to beginners in this way of building model age of sail ships and so you will see that if at first you make the occasional error it is easy to replace a line or put one in which was left off.

For more posts looking at my collection of Napoleonic ships, just click on the ‘All at Sea’ tab at the top of the blog which will link you to all my posts in date order. There you will find modelling ideas, painting tips and links to their video briefings, game reports using the models and suggested reading from book reviews on the subject.

Next up, I will finish off this series of tutorials by running through the running rigging on a French frigate which will illustrate the sequencing of the lifts and braces peculiar to the warships of those navies.