If you've been following the recent series of posts by Bill Slavin who is currently working his way through the scenario book O'er the Hills, you might be interested to know that he has now arrived before the Galician port of Corunna in his recent refight of the Battle for Elvina Ridge which captures the key fighting that occurred between the armies of Marshal Soult and Lieutenant General Sir John Moore on the 16th January 1809.

Bill's three previous games can be picked up in the link below covering the two scenarios for the Battle of Vimeiro and the Battle of Rolica from the 1808 campaign in Portugal between General Junot and Lieut Gen.Sir Arthur Wellesley.
As with his previous posts, Bill outlines the scenario setup and accompanies his blow by blow account of the battle with pictures of his glorious 1/72nd collection of Peninsular Napoleonics fighting amid his carefully sculpted terrain that really captures the limited line of sight the warriors on the ground would be experiencing amid the smoke and noise of battle. 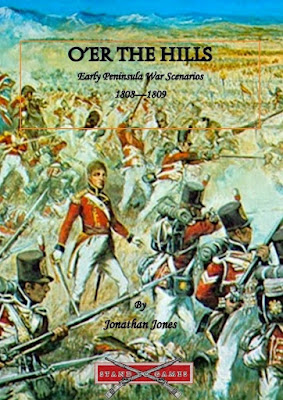 This is a tough fight for the French under Soult as it was in reality, with a very good British army consisting primarily of veteran first battalions, now refreshed and reequipped after a few days rest by the arrival of the Royal Navy, following their harrowing retreat in the previous weeks across the Galician mountains in winter. 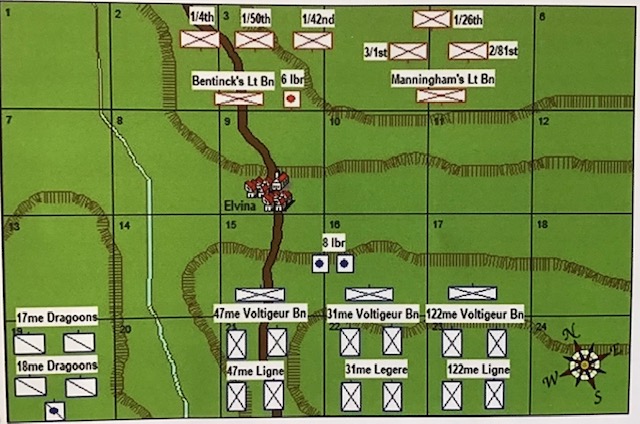 In addition the terrain favours the defence with broken ground making it poor cavalry country and a ridge line offering a ready made defensive position for the British to anchor on and with the French similarly tired and hungry after their long pursuit now in hostile country and very far from any depot.
However Soult's forces are made up of veterans of Napoleon's Grande Armee who only know victory and have trounced their way through Spain and have chased this British army, taking prisoners all along the retreat route, as the British seemed to be on the verge of falling apart, if it wasn't for a very disciplined rear-guard force holding them at bay.
I remember fighting this scenario several times and with the die rolls for the various British reinforcements and French cavalry finding a suitable crossing over the River Molinos, now in full winter flood, we found every game quite different although all of them were hard fought back and to battles across the valley in front of Elvina.
As you can see from this selection of Bill's pictures of massed columns and British lines, together with massed ranks of French dragoons, really capture the drama of his own clash and I was quite exhausted just reading the to and fro nature of the fighting around and in Elvina.
I remember well visiting Corunna on our 2019 Peninsular Battlefield Tour as Carolyn and I drove our way across Spain and Portugal in a long planned retirement holiday taking in these key battle sites and was fascinated by how close to the centre of Elvina the opposing British and French ridgelines are, still clearly identifiable despite now being covered in buildings that have grown up over the succeeding two-hundred years.

Of course any visit to Corunna must include a visit to the last resting place of Sir John Moore in a former gun redoubt on the sea facing city wall overlooking the embarkation point for the British troops after the battle, now a picturesque garden area and from the remembrance poppies laid before it showing it still to be a place of pilgrimage for British visitors to the town. 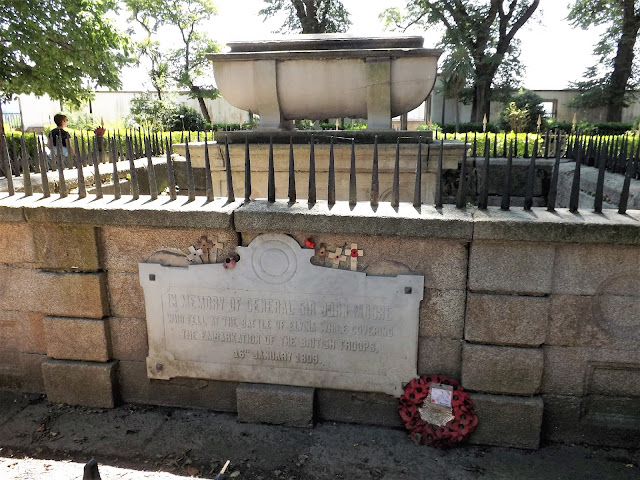