Yesterday I got my WWII collection out to try out the Battlegroup rules that I picked up at Salute. I have posted a report on our game on the club blog, so check it out to find out how the game played.
Devon Wargames Group Blog

I should preface this post by saying that I don't intend this as a review of "Battlegroup Overlord" and the rules. That is because, having only played them twice, I don't really feel qualified to give that kind of assessment.

That being said, I do feel happy to give my thoughts and impressions, as someone who has bought both Kursk and Normandy books and is the proud possessor of the mini rules book, and having played them, set up a scenario with them, and had to thumb through the rule book to find answers to game situations can at least give an experienced wargamers view on how they work or don't. 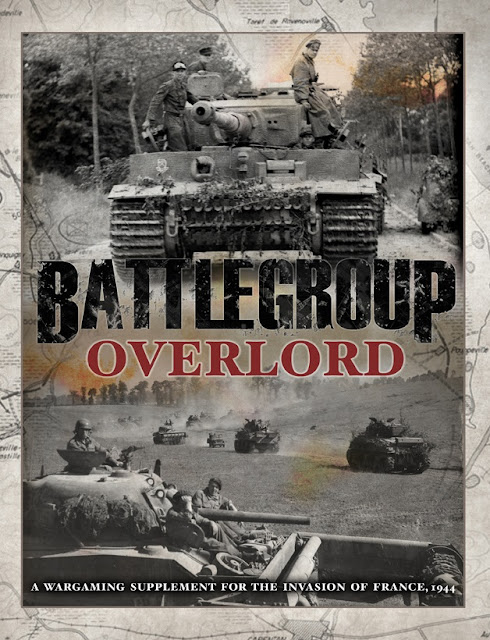 So Jon, why did you get into this rule set? Well the simple answer to that question is that I was looking for a set of rules that I could play WWII Company level games, in a fast moving set up that was more simulation than game, and that was fun to play.
My turn to set of rules for this kind of game has to be I Aint Been Shot Mum (IABSM) by the Lardies, and they just about tick all my boxes, save one. That box is the one marked "fast moving". The card system in IABSM is great for simulating the friction and uncertainty of warfare, but it does slow the game down to a certain extent. I look on with keen interest at the new Chain of Command game currently being tested by my fellow club members Jason, Nathan and Gus, which has been reported on at Jason's Blog, which uses dice instead of cards to capture this friction element. It does strike me as a quicker system.
So I am in the market for looking at other games for WWII Company battles and have been happy to try out the Battlegroup rules, and I find myself in the same position with some but not all boxes ticked and liking these rules for different reasons. I think that my view of these rules is "fast moving" YES, "fun to play" YES, "more simulation than game" NO.
So why have I rated this game the way I have.
Well as fast moving goes, in both games we have rattled on through the turn sequence with little or no problem all adding the appeal of a game that can easily give a result in an afternoon of gaming at the club. I couldn't always say that with IABSM.
﻿

Are they fun to play? Emphatically, absolutely, YES. The feel of the game, with the clever use of the Battle rating counters, degrading your force morale over time and occasionally throwing up the odd special event like an air strike or random mine attack is an absolute pleasure and is the "cumin, coriander and turmeric base to this interesting curry".
I recall with a smile, in yesterdays game, as the British players were forced to draw yet another counter from the box due to a well placed German artillery strike, then themselves smiling with glee as they pulled out a Mine Strike counter and were able to cause the German player much concern as one of his Marders reversed over an un-spotted mine.
So yes, fun is something this game has in abundance.

Simulation rather than game? Here lies the rub of the matter for me. I look for the Lardies principle of playing the period not the rules in games systems I like. This principle has been a guiding factor in my choice of rule sets for ever and leads me to question where Battlegroup fits in to the rules I have considered using over the years.

I too, don't subscribe to the school of thought that says, "a good simulation can't be fun". That school of thought tends to point to the Newbury Rules systems of copious factor sheets that one had to work through to decide whether one force could shoot at another at a given range etc, etc.

The Lardies with their clever use of combined morale and casualty results table, and the design principles that reward the historically tactical use of the weapons systems available to the troops of the period. The ability to influence the randomness of the cards system by adding to or taking out cards based on the quality of the command system applicable to your force. All this points to a rule set that can combine a simulation with a fun game.
﻿
﻿

With Battlegroup I found myself a bit confused with what the designer was trying to achieve.
The rules are trying to be appropriate to play games from Section/Squad level to Battalion. This is a tricky spread of detail to manage, and I found myself wondering why as a Company or Battalion level commander I would be counting up how many rifles, SMGs and LMGs my sections were armed with rather than working in groups of these weapons as most rule sets at the Company/Battalion level tend to do. Thus casualties are based on individual men rather than groups of men, a seemingly low level of detail for a game looking to cover battalion scale clashes. There are arbitrary ammo load outs for armoured vehicles with assault guns and tank hunters having much smaller allowances than tanks.
This necessitates the requirement to record ammunition used by individual vehicles, a throw back to Donald Featherstone and WRG. Surely modern gaming systems have moved on from these kind of rules?

Then with artillery there appears to be unlimited strikes available to troops of guns, where most rules today try to model the restricted access to higher lever artillery by limiting the number of strikes in a game. The lack of rules covering smoke seem strange. Then there is the requirement to place a spotting round when setting up an artillery strike, which can end up being moved 4d6 inches in any direction, possibly ending up with the round moving out of sight of the OP who called it in. This does not stop the barrage going ahead! Surely the whole point of a spotting round was to be able to see where the fire would fall and to, if necessary, correct the fall of shot back onto or nearer the target before firing for effect. The artillery rules don't seem to model the efficiencies built in to American and British systems which allowed multiple assets to be co-ordinated by one OP, or the more cumbersome often WWI systems used by the Axis nations which often forced them, particularly in the later years of WWII to rely more on their mortars for rapid response than their heavier artillery.

These issues with the rules have caused me to think of Battlegroup more as a game than a simulation. The "Game" category, for me includes rules such as Flames of War and Bolt Action. I think Battlegroup are more simulation, less game than them. Many of the aspects I have highlighted are easily changed with house rule adaptions. I, for example, will limit artillery missions in my scenarios. I will allow smoke and design my own rules to cater for this. I will not allow a barrage to be fired when a spotting round is quite clearly out of sight of the OP who called it in. I will allow allied OPs to call on multiple units of artillery in missions.

One final point that is not only applicable to Battlegroup but seems to have become a common omission in most rule sets published today. Please, please, pretty please, can rule designers include, as a matter of routine, a subject index to help speed up the process of finding what it is you want to look up. The new Battlegroup rulebook is a welcome addition and even more so as I found the ready reference card poor given the lack of information on it. However the lack of a subject index can drive one to distraction when you simply want to find out something in particular without wading through the sections in the book.

I plan to play more games with these rules, starting with Pegasus Bridge, next month at the club. Why? Because they are fast, fun and I think adaptable to allow me to make changes to the base system to improve the simulation I want. If you haven't tried these rules yet I would suggest you check them out.