This weekend has seen our annual trip to "deepest darkest" North Devon to spend time with Chas Carter who is our host and games miester. I like to think of our summer games as the war gamers answer to the Glastonbury Festival, giving us the opportunity to get close to nature whilst enjoying great hospitality and gaming fun.


Needless to say, the camera goes with me on anything to do with war gaming and so here follows a little record of the fun. 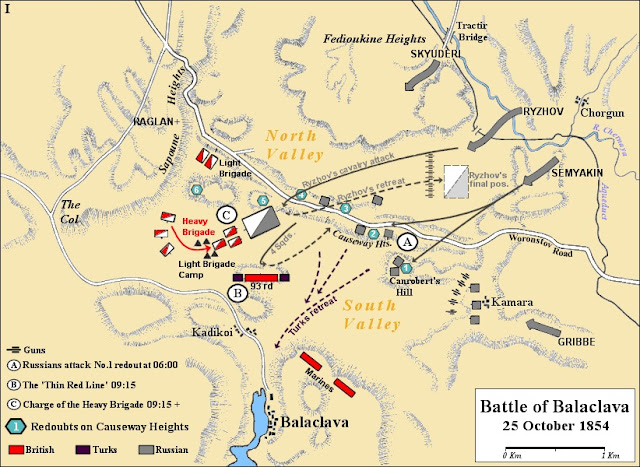 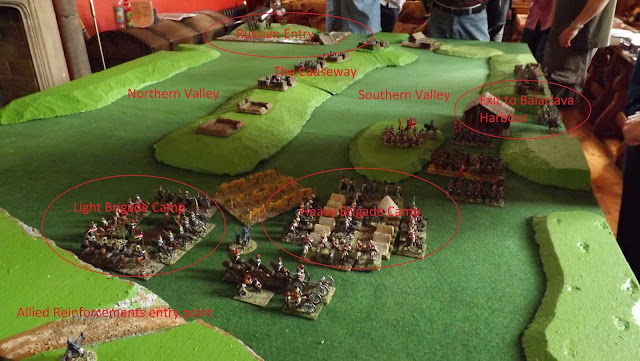 The Battle of Balaclava was our set piece get together this year and I was given the honour to assume the role of The Honourable Brigadier General Sir James Scarlett commanding the Heavy Brigade.

We all gathered yesterday for our briefings and a full day of war gaming the battle which, as it happened, turned out to be a very similar result as to its historical predecessor. The rules used were Black Powder, not a set that I use myself, but the rules stood up well to the test of 11 players and about 20 units on each side.

The briefing set up the historical context of the battle with the Anglo Turkish troops asleep in their camps as the Russian attack came in over the River Chernaya. The Russian objective was to push over the Causeway and exit the southern table edge to cut off supplies from Balaclava harbour supporting the siege lines around Sevastopol.

The relationship between the British commanders was a difficult one to say the least, and Chas had chosen our players to match with the styles of their historical counterparts. These styles were a highlight of the game as the various British senior commanders struggled to decide where to place the emphasis in extra command points.

As a mere Brigadier General, mine was not to question but to simply do, and with the blunder rules in Black Powder added in to the mix, some allied movements became very un-coordinated. It was not uncommon to hear the comment from an astounded commander on receiving his orders for the next turn, "What's this, the man's an idiot, I can't do that!!" History repeated.

﻿
The Russian forces entered the table in the early hours with the British forces unaware of their approach (The British cavalry brigades were forced to wait three moves before testing to respond to the Russian advance, simulating the surprise of the attack).

As the Russian infantry crossed the bridge and ford, the columns struggled to clear the river and press on quickly for the first of the Turkish gun emplacements. The Turks, aware of the masses approaching their lines opened fire inflicting casualties and disorder on the Russian columns.

Finally both the Heavy and Light brigades sounded the stand to arms and after a meeting between Raglan and Lucan about orders and messengers, the two brigades set off down the Southern Valley to support the Turkish emplacements and protect the approach to Balaclava.

As the Heavies trotted down the valley in perfect lines, as if on General Officers Parade, the first elements of the British 4th Division and General d'Allonville's French cavalry started to arrive from Sevastopol.

The Russian brigade under the fearless Duke Nathanovich Goodyearovski gamely marched along the Northern Valley to challenge the Allied reinforcements and delay their impact on the struggle developing for control of the Causeway.


The Heavy Brigade under General Scarlett, wheeled in to two lines and charged up the side of the Causeway to attack the victorious Russian infantry. One column managed to form square and fend of the fearsome British attack, but their comrades in the other column were not so lucky. After some brief sabre work it was all over and two Russian columns were removed from the order of battle.

Whilst the Heavy Brigade were causing consternation in Russian ranks at the eastern end of the Causeway, their brothers in arms of the Light Brigade were getting stuck in on the western end ripping through an Hussar and Cossack regiment to clear the way for supporting Anglo Turkish infantry.

The battle now developed into a slugging match between the Russian infantry and cavalry trying to hold their foothold on the Causeway so as to allow their artillery to be brought forward, and the British cavalry trying to push them back to allow the Anglo Turkish infantry to retake the heights.
Which side would succeed?

The artillery casualties inflicted on the Russian infantry had taken its toll and with British cavalry threatening to attack they took refuge in the Turkish emplacements, which gave them protection from small arms and artillery fire, plus kept the cavalry at bay. However as the Anglo Turkish infantry columns charged into the Russian masses, the emplacements became a death trap.

One by one the Turkish emplacements were cleared of Russian troops and despite counterattacks from their cavalry, the British cavalry held the ground in between.


As the Anglo French troops on the western end of the Northern Valley were joined by the British Guards of General Bentick's 1st Division, the Russian position became more and more untenable.


With the final melees going to the Allies, the Russian troops started to fall back from the causeway, and with the road into Balaclava an impossible objective the game ended.

We had gamed from 10am to 7pm and all had a great day with lots of laughs, banter and some great moments in history recreated in our simulation of the famous battle.

Many thanks to Charles and Clive for setting up a great days entertainment. Thanks also to Steve M, Vince, Andrew, Andy, Nick, John, Nathan (Duke Goodyearovski) and Mike for their contribution to another great game in North Devon.

Talk for next year looks like it could be the Third Crusade!!﻿﻿
Posted by carojon at 13:43