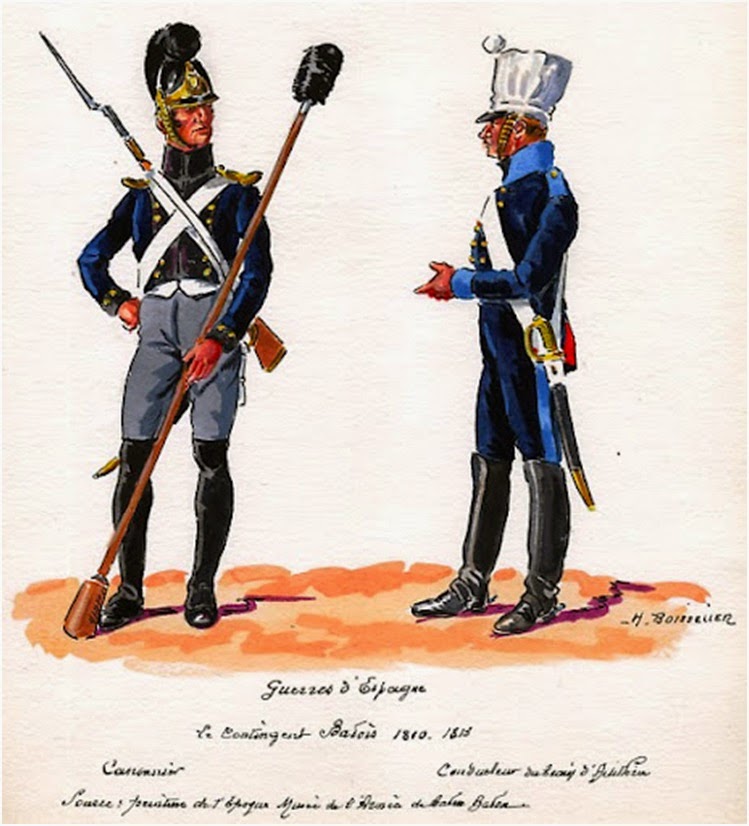 The final unit to complete the German Division at Talavera is the Baden Foot Artillery under the command of Major Franz Friedrich Christian von Steinmetz. 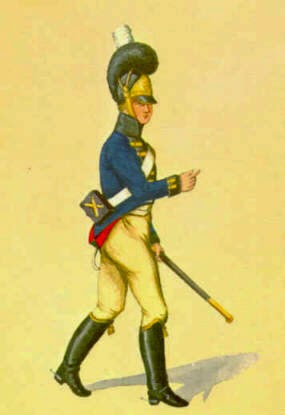 The artillery wore the same coats as the infantry, but with black collars, lapels, plain round cuffs and turnbacks. The helmet was topped just with a black caterpillar crest, with brass fittings as were the buttons and shoulder scales.

The soldiers of the train had dark blue uniforms with light blue facings and brass buttons.

Until recently, it has been unclear as to what calibre or model of guns this battery used, but a participant recorded that early on the 13th October (1808 in Bayonne) the drummer beat the general march. We were soon all busy receiving bread, meat, camping equipment, cooking utensils, cartridges  and exchanging our artillery guns for French cannon.

He then goes on to state that the battery was probably issued with six French 4 lbr cannon and two 6 inch howitzers as replacement for their original Hanoverian 6 lbr cannon and 7 lbr howitzers.

As you will see I have modelled all the artillery in the division along these lines, as I think this makes most sense in terms of handling the logistics of supply and to my mind it would seem unlikely that only one unit was issued French equipment and the others were not.

The figures I have used were AB Wurttemberg foot gunners, Blue Moon French 4lbr guns and the train are a French limber and team from Warmodelling.

With my preference to using Carnage & Glory rules I am now setting my artillery units up to one gun base representing 3-4 guns and with a train that needs to be positioned behind the battery in base to base contact to represent the foot print of the unit when deployed.

As I had originally built my units around the "Napoleon at War" system it now means their 4 model French batteries give me two two model batteries and I am adding a British foot crew to bring my British artillery component up to five foot batteries, although I still need to add three limbers to complete them.

Next the German Division on parade.
Posted by carojon at 09:52