Yesterday was spent out in sunny Somerset exploring the battlefield of Sedgemoor, enjoying the food in a very nice pub and taking a look at the Wellington Monument.

The Battle of Sedgemoor, fought in the early hours of the 6th of July 1685, was the last battle fought on English soil and, following the restoration of the monarchy after the English Civil War, was the first in a series of struggles between the Catholic and Protestant claimants to the English throne that would culminate in the Battle of Culloden in 1746 thus ending the bloody religious wars of that period.

I have attached links to various sources of information on the campaign and subsequent battle, with the Battlefield Trust site particularly useful for a more detailed analysis. Suffice to say that the Protestant leader of the West Country rebels, the charismatic Duke of Monmouth, found himself in Bridgwater, having failed to move on Bath and Bristol and now facing a Royalist army under the command of the Earl of Feversham, a French noble and favourite of King James. The Earl had been appointed to command over and above a very able Colonel John Churchill who would go on to be better known as the Duke of Marlborough, perhaps the greatest of British Generals.

The battle site near Bridgwater in Somerset is a forty minute drive from home and yet I am guilty of not having walked the ground, even though I have known about this short campaign and battle since studying it at school many many years ago. 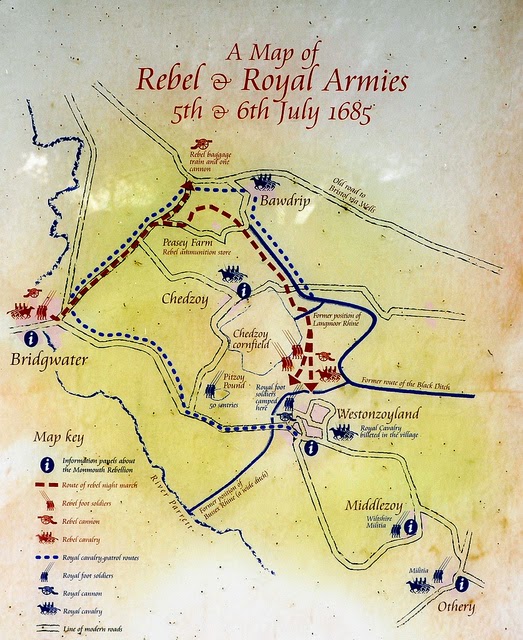 To understand Sedgemoor is to understand its position in relation to two churches clearly visible at opposite (Rebel and Royalist) ends of the battlefield, Chedzoy and Westonzoyland.

These two churches provided two significant land marks in the flat open Sedgemoor between the two hamlets and along with the major ditches and dykes that help to drain this low lying land were the principle points for the Rebel army to navigate its way in a daring night attack on the Royal camp.

The Duke, an experienced military commander, was attempting to give his inexperienced and poorly armed forces a better chance of overcoming the trained Royal army by surprise and use of the darkness to cover their approach as they attempted to evade Royalist cavalry patrols. The map above shows the positions of the two forces and the approach march made by the rebels on the night of the 5th July 1685.

After a very nice pub lunch on the outskirts of Bridgwater we started our tour in the little village of Chedzoy which, along with the Black Ditch, acted as guide points for the rebel army to calculate their position as they approached the Royalist position. 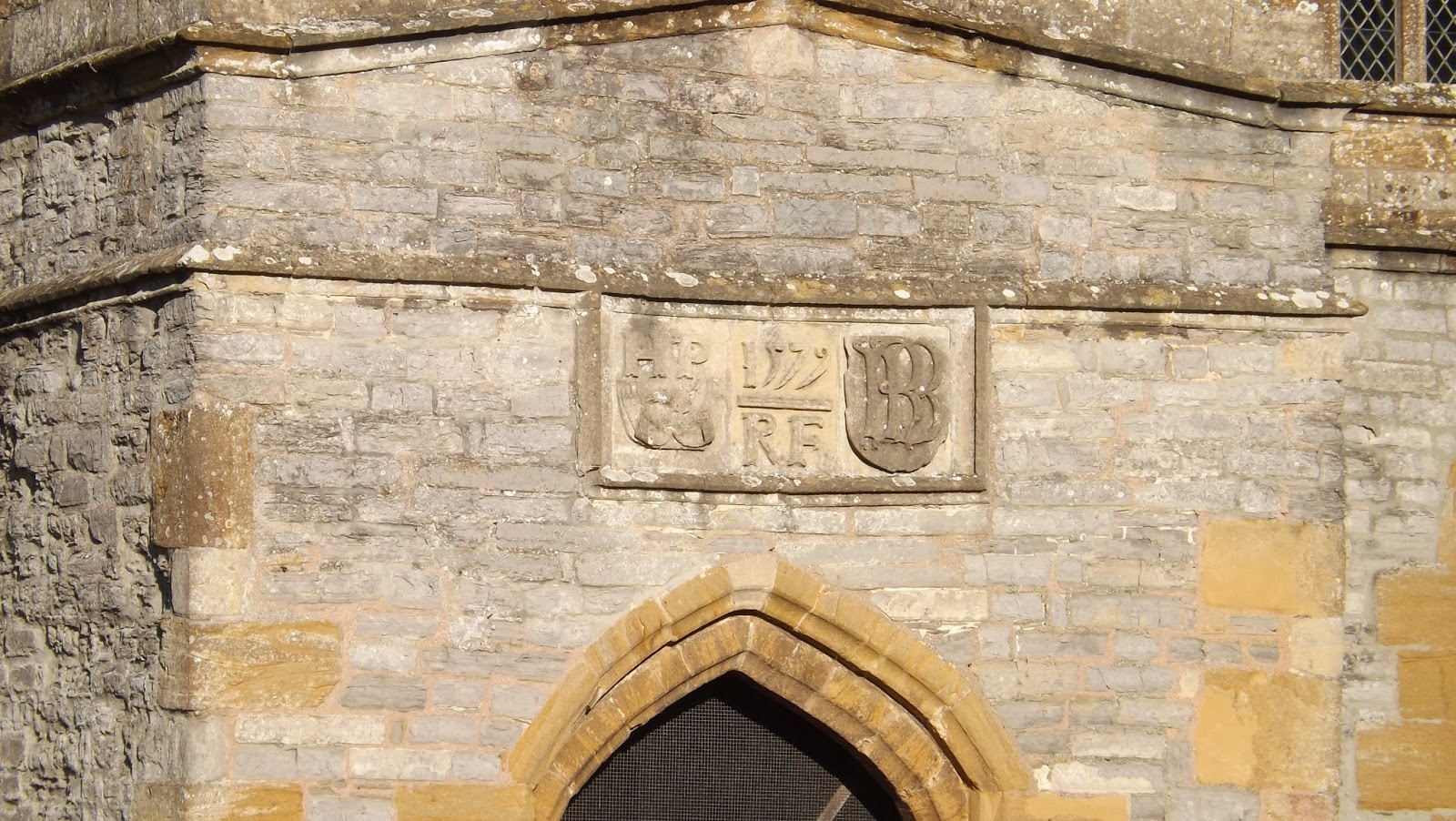 As we drove back towards the Bridgwater - Westonzoyland road I stopped to take pictures of Westonzoyland church from the rebel position. The moor back then would have been devoid of the modern enclosures and power lines that dot it today and, in the dark, with the various ditches and drains that cross it, it would have been a formidable piece of terrain to navigate across.


As we headed towards Westonzoyland we were moving into the Royalist lines and getting to see what a very good defensive position the Earl of Feversham had chosen with the village and camp secure behind the Bussex Rhine (pronounced Reen) and with one main road out towards any expected rebel attack from Bridgewater. With his cavalry patrols out at night on the moor he would have felt quite secure in his HQ at Weston Court just opposite the church in the village (see the map below). Sadly the house was demolished in subsequent years.


The interesting fact about the Royal defences was that the Bussex Rhine was not as formidable a barrier as it might have seemed to the casual onlooker; as recent archaeological work on the former ditch, now dried up and overgrown, showed it to be wide but very shallow and easily crossed by infantry.

This information would prove a deciding factor in the outcome of the battle as rebel forces failed to make rapid progress across it to take advantage of the initial surprise and shock of their approach march. The Duke even sent on his weaker cavalry to burst in among the Royal troops busily forming up as he brought up his infantry as quickly as possible. The rebel cavalry wasted time searching for crossing points in the dark, under fire, oblivious to the fact that they could have crossed quite easily.

The legend of the Royalist forces becoming aware of the rebel approach is recorded as being a single pistol shot ringing out in the night. There seems to be some consistency in this report, but whether it was from a Royalist cavalry patrol or an unlucky discharge from a rebel weapon seems unclear.

Once the Royal troops had recovered from their surprise at being attacked from an unexpected direction, their better training took effect as they started to deliver telling fire on the approaching rebel infantry that attempted to trade volleys across the Rhine. This was followed up by attacks from the Royalist cavalry on the flanks of the rebel infantry, following the rebel cavalry having been shot up by both sides infantry in the dark. The Royalists started to move their light cannon to face the new threat and bring their fire to bear on the enemy infantry.

The rebel infantry started to fall back in some disorder across the moor and, as the Royal infantry crossed the Rhine in pursuit, the withdrawal rapidly turned to a rout during which the greater part of the thousand odd rebel casualties would have been suffered. The Duke beat a hasty retreat, to be captured a few days later and meet a grizzly end on the block at the Tower of London.

The centre of Westonzoyland village is dominated by St Mary's Church which has a history going back to 1268 when the first record of a chapel on the site appears. The church hosts a great little exhibition about the battle and its role in it, being an impromptu prison for surrendered rebels.


This period of Horse and Musket warfare is an interesting transitional period with the move away from the typical matchlock and pike armed forces common in the English Civil War towards the new flintlock muskets equipping some of the Royalist infantry regiments. Some of the British infantry were unhappy with the flintlocks preferring to stick with what they had come to rely on, the sturdy if rather clumsy matchlock. This period also saw the first use of the plug bayonet that would cause Royalist troops much grief when they tried to use these against Jacobite rebels and charging Highlanders.


St Mary's church has a beautiful light interior with an amazing carved ceiling. 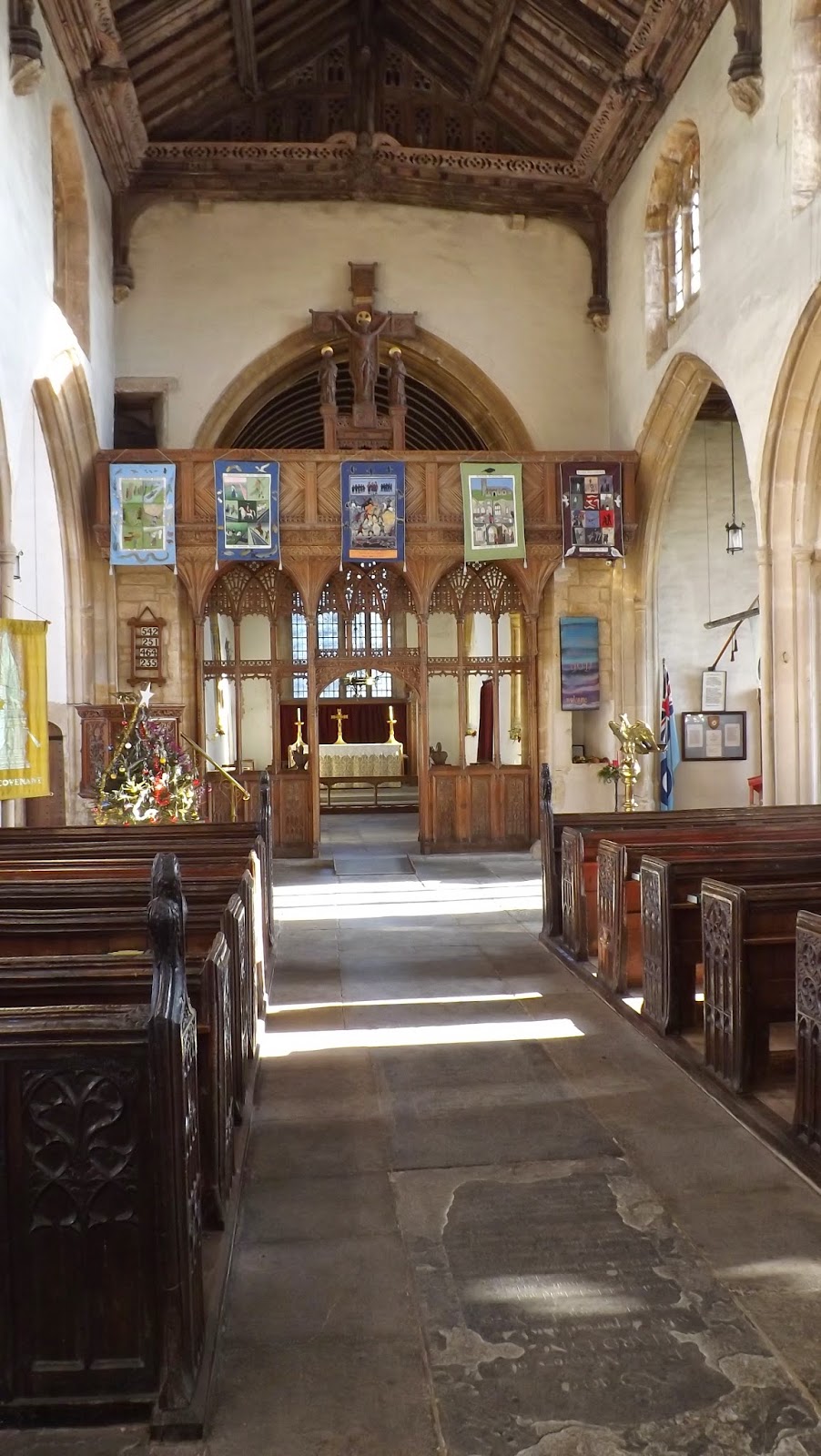 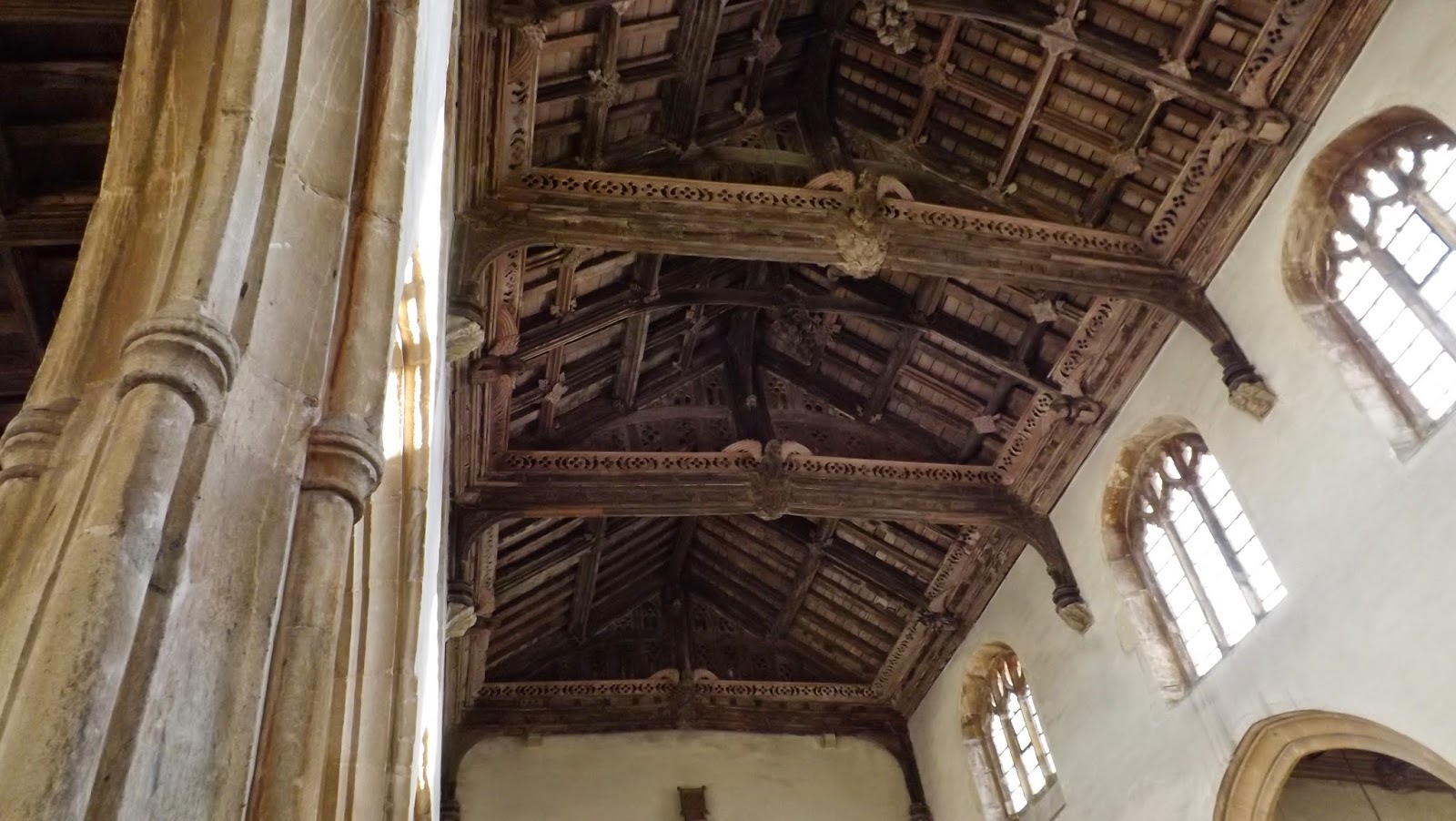 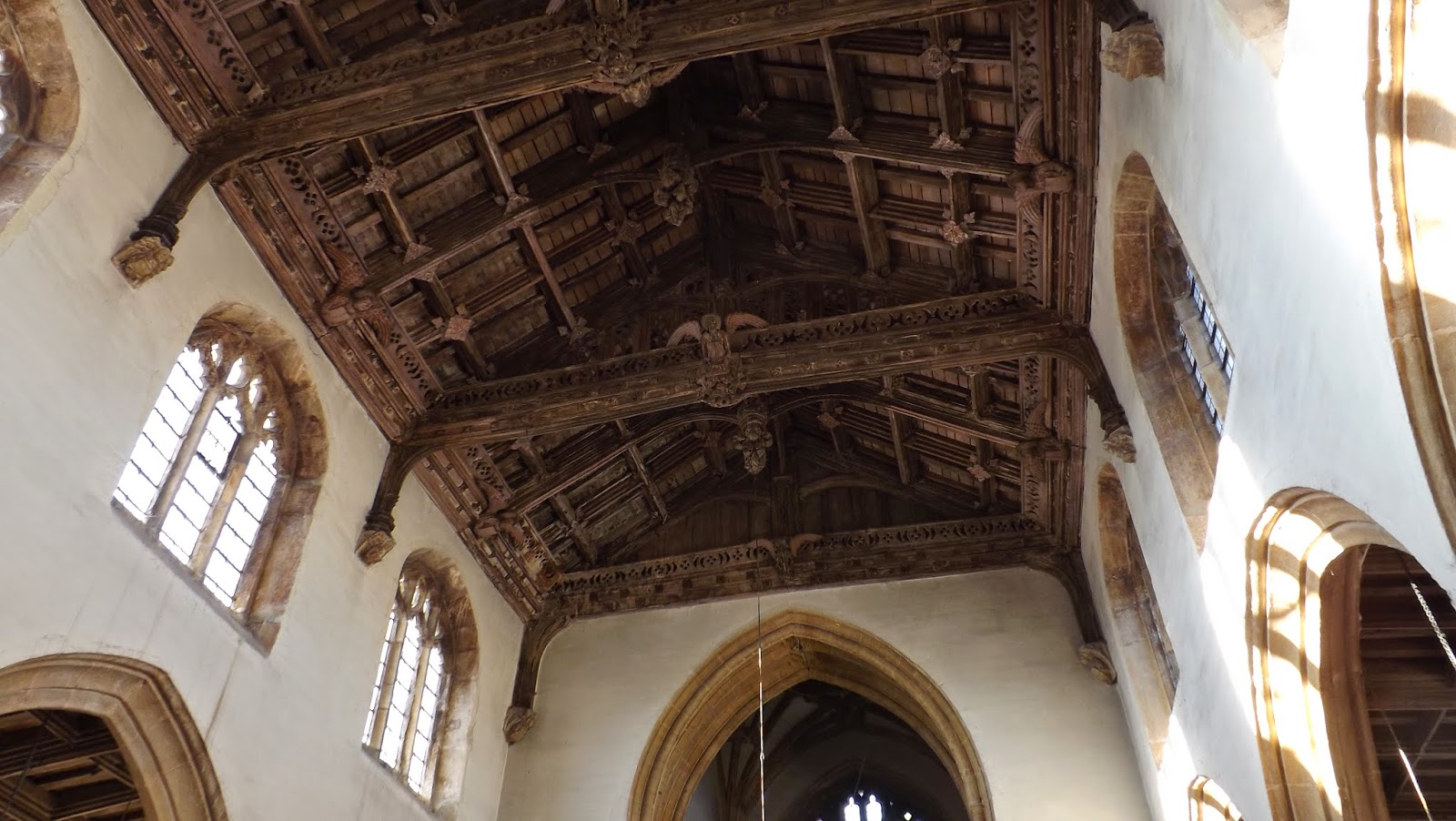 Battlefields always have a feeling of sadness that seems to cling to them and Sedgemoor is no different. One can only imagine the horror and terror that filled these open fields nearly 350 years ago.


The tyranny that the rebels of Monmouth's army fought was demonstrated to its full extent with the appointment of "Hanging Judge Jeffreys" and his Bloody Assizes to purge the Westcountry of its rebels. This is recorded on the memorial to the battle, with transportation for forced labour to the West Indies being as good as a death sentence.

Needless to say he failed, as three years later, William of Orange received a rapturous welcome from the South West when he landed at Brixham in Devon on the 5th November 1688 and James's regime quickly collapsed during what came to be known as the "Glorious Revolution".
http://en.wikipedia.org/wiki/Glorious_Revolution

Finally on our way home we stopped off at the Wellington Monument to see if we could climb the steps to the top for a magnificent view over the county. Unfortunately repair work is still being carried out so we could only enjoy the last few minutes of the winter sun as it quickly dropped below the horizon. 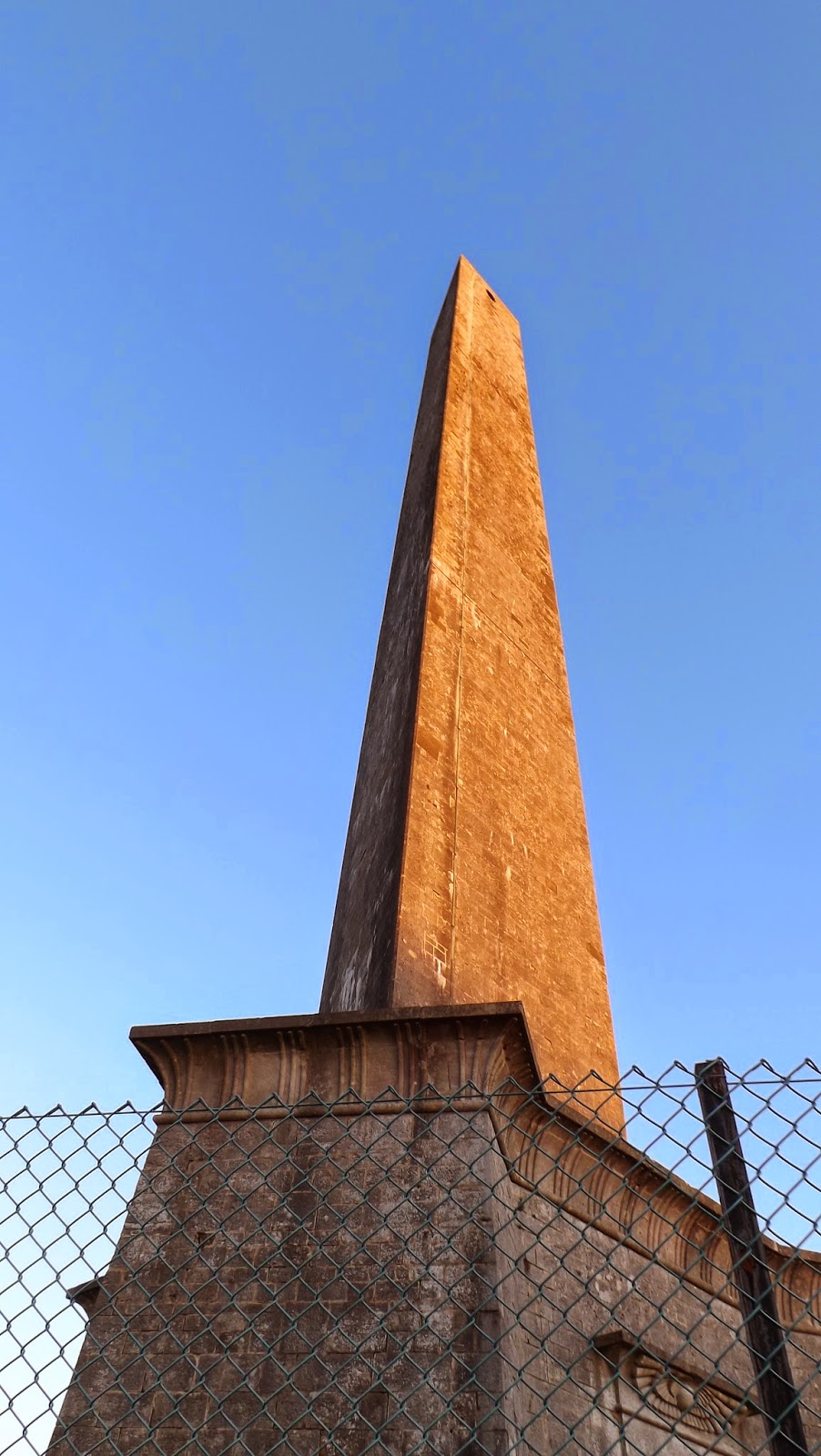 Thus ends my last post for 2014, on what has been an eventful year on JJ's Wargames and with plans for lots more to come in 2015. I will take a look at where the blog is and how things have progressed in the first post for 2015 and until then wish everyone a very Happy New Year.
Posted by carojon at 07:23