I Ain't Been Shot Mum at Devon Wargames Group

If it's the second Saturday in the month you will generally find me having a good time at the monthly meeting of the Devon Wargames Group.

If you want to see how the battle turned out and the history behind it then just follow the link to the post on the club blog
http://devonwargames.blogspot.co.uk/2016/02/baskeyfield-vc-i-aint-been-shot-mum.html

I don't play IABSM regularly since I shifted my attention away from WWII and on to Napoleonics just over two years ago. However with a large collection of late war NW Europe collection of 15mm WWII troops, it is a rule set I keep coming back to.

I like and have played several games of Chain of Command, but I think the next level up scale of IABSM appeals to me more and I really enjoy the card driven aspect of its play that always has the knack of generating those very special moments of high drama that make a game live long in the memory.

I was also pleasantly surprised how quickly we all picked up the mechanics of the game as it rolled along seamlessly with seemingly little effort and great attention to the tactics needed and only the occasional glance at the rule book to clarify a situation; this very much in line with the Lardy ethos of playing the period and not the rules. 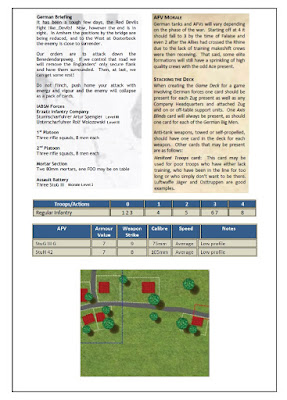 To keep the reference checking to a minimum I gathered all the scenario relevant information for both sides onto one piece of paper each that told the players everything they needed about the scenario, its objectives and the forces involved with their various equipment and weapon stats. 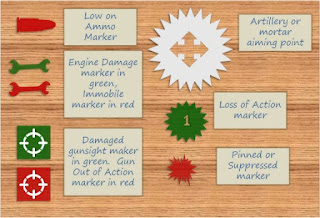 The scenario is a real gem and one well worth playing if you are that way inclined. More information can be found on the DWG blog post.
Posted by carojon at 06:52