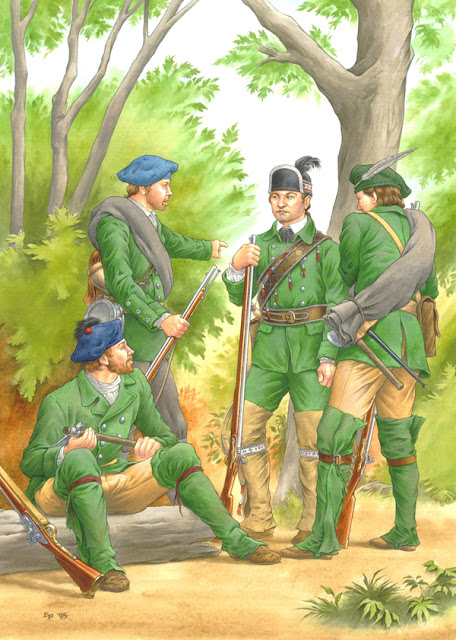 Formed in the winter of 1755 from units based at Fort William Henry and commanded by the then Captain, later Major Robert Rogers, Rogers Rangers became one of the iconic units of the Seven Years War fought between Great Britain and France in their struggle to dominate the early colonies of North America and Canada.

Initially forming one company, the unit operated around the Lake George, Lake Champlain area of New York sometimes deep behind French lines raiding towns and military encampments; often ignoring the military tradition of retiring to winter quarters by launching raids that ambushed French forces twice in January 1757 and March 1758 at the first and second Battle of the Snowshoes.

The usefulness of the Rangers was recognised in that the unit was expanded to two then four companies in that time and by early 1758 had expanded to fourteen companies of around 12-1400 men and operating with Indian allies were able to take the war into the French controlled territories.

The tradition of daring attacking light forces lives on today in the American armed forces with the establishment of WWII US Ranger companies that carry the heritage of these men into the modern forces of today.

These figures are part of Steve M's growing collection of French Indian War figures, many of which have featured on this blog over the years. I love the period and the scale and it's nice to break up my own project work by helping friends with theirs, and I get to play with them as well.

The picture that heads up the post gives the look I was striving for and I think they will make a nice addition to the collection.

After my little excursion into the French Indian War, it's back to the Peninsular War and the Talavera Campaign with the 2/63e Regiment de Ligne up next.