From Corunna to Waterloo - Gareth Glover 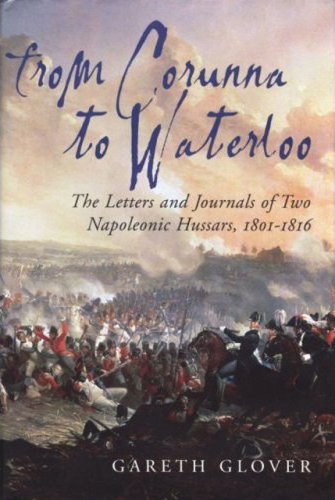 It was back in January, that I mentioned this book, partly read when I travelled up to Penarth for the Crusade 2016 show and listened to the author Gareth Glover talking about his research into events during the Waterloo campaign. Gareth kindly autographed my copy.

Since then I have been tied up with various projects that required more reading and so my leisure reading has been somewhat curtailed. However I was determined to finish this book because I really enjoyed it and also to give you my impressions.

The book is a collection of letters and journal entries written by two officers in the 15th Hussars, namely Major Edwin Griffith and his nephew Captain Frederick Philips with by far the greater contribution being made by the former; who regularly kept his journal updated through the Corunna, Vittoria and Waterloo campaigns, the last of which saw Major Griffith sadly killed during the latter stages of the battle.

In between the Corunna campaign and the Hussar brigade's return to Spain and Portugal in 1813, the officers recorded their day to day activities on home duty and the policing requirements made, particularly on the light cavalry regiments, to maintain law and order at home.

What makes this book particularly interesting is that the letters and journal entries, recording the combats and other events, were made on or very close to the time they occurred and so carry added weight to the descriptions recounted.

Probably one of the most famous cavalry actions, certainly of the Peninsular War, was the combat at Sahagun in December 1808 and Griffith's gives a detailed account of the march to combat and the manoeuvres made by the two sides prior to coming to grips.

Griffith, who was a troop commander during the 1808 campaign, provides the kind of detail that anyone wanting to re-fight this action would dream of;

"Trusting to their superiority of numbers, and to their advantageous position in a vineyard, with deep ditches, blinded with snow in their front, they foolishly stood their ground, hoping as they afterwards told us that the vine boughs or ditches would have thrown down all our horses, and that they should make easy work of us; they also gave us a volley from their carbines as we were coming up which killed and wounded a few of our horses......."

Following this there are equally vivid descriptions of the French pursuit and British rear guard combats including the capture of General Lefebvre as the Guard Chasseur a Cheval were roughly handled at Benavente on the River Elsa.

As well as the combats there are descriptions of the country, the food and people that were encountered, and it would seem that the the local population and the houses they stayed in during their travels did not impress.

By 1813 when the 15th Hussars returned to active service and joined Wellington's Peninsular army prior to his lightning campaign of that year, the now Major Griffith was in command of the regiment with his commander Colonel Calquhoun Grant in command of the Hussar brigade (10th, 15th and 18th Hussars). What follows in the journal entries are some very detailed accounts of the route of march and the clashes with French cavalry as they are forced to fall back before Wellington's army. The journal then takes the reader on to Vittoria, the fighting on the Pyrenees and the pursuit into France and battles prior to Napoleon's first abdication.

The accounts and letters keeps that "first person in the moment" style of writing as Griffith's describes events and his interpretation of them with, for those less familiar with the actions, Glover's useful notes at the bottom of the page letting the reader know what was actually happening.

Each place visited is recorded meticulously throughout the book making it a rather interesting and straightforward task of plotting the movements of the regiment at various points along the march, whilst considering the time taken to cover the distance. I was quite interested to see the route taken by the Hussar brigade in 1813 as Wellington began to muster his forces close to the Spanish/Portuguese border, and I recorded the position markers on Google Earth as seen below.

As mentioned earlier, a really useful aspect to following the accounts provided by the two officers is Glover's addition of including reference notes at the bottom of the pages about individuals and places mentioned on the page, so you don't lose your place or the context, checking out which individual or place is being referred to in the text.

In addition there is a very comprehensive index at the back for future reference if, like me, you are needing to check out the finer details of a particular cavalry action that you want to fight.

One aspect that I particularly noted and bears reference to my review of  Ian Fletcher's "Galloping at Everything" was the discipline and good order displayed by the Hussar brigade, when several times in the accounts on the pursuit of the French to Vittoria, the French cavalry force is over turned in combat and the hussars rally back on their supports when ordered.

Additionally the notes about the pursuit by British cavalry after the battle make interesting reading showing that the 10th and 15th Hussars did make a vigorous pursuit of the beaten French forces with the 18th Hussars failing to support their brigade comrades by stopping to loot the French baggage. Indeed Wellington severely reprimanded the 18th for their behaviour and the regiment was not granted the honour "Vittoria".

Likewise at Waterloo, the 15th are recorded making a determined pursuit of the French from the field of battle, demonstrated by the greater proportion of casualties for the day being incurred during that pursuit before they handed the task over to their fresher Prussian allies.