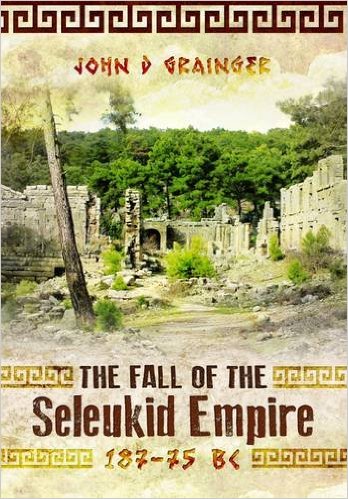 This is the third book in a three part series written by Grainger and which covers the Rise and Fall of the Seleucid Empire. I read Book one sometime last year and it details what happened after Alexander had died in Babylon, how Seleucus then carved out an empire for himself and what happens to his immediate successors, Book one stops just as Antiochus III comes to the throne. Overall it was very interesting although the author, who is an expert on the cities of this area, spent a bit too much time going over the founding of each one (and there are a lot of them) making a section of the book a little tedious.

I skipped Book two (until I got it this month as a present) as it is solely about Antiochus III and I already knew much of his story. Instead I piled into Book three which as the title says above, is all about the fall of the empire. 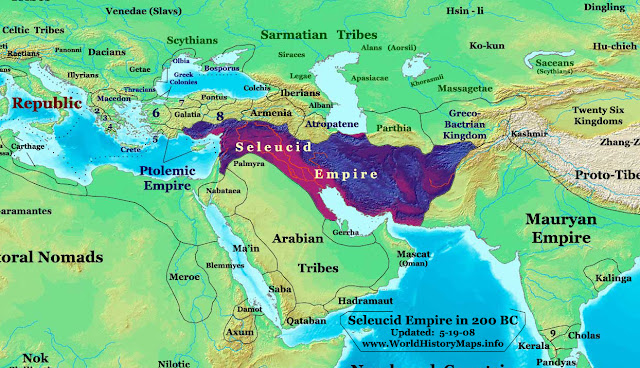 Even after Antiochus III defeat by Rome at Magnesia the Seleucid Empire was still in a very healthy state, and big! All Antiochus really lost were his gains in Greece and some suzerainty over various Asia Minor petty Kingdoms; what would become Parthia was still under his control and with Rome having no further interest his only real concern was Egypt under the Ptolemy’s.

I think for this review I can do away with chapter and verse because the overall story is much the same, the same events more or less run through the next 110 years in a steady pattern of what those of us who still have hair would call “rinse and repeat”.

Book 3 starts in 187BC with the death of Antiochus III (whilst he was quietly pillaging a temple); he left behind a stable empire however this wasn't always a good sign. Over the following years whenever a King managed to get things running nice and smooth, they all decided that now was a good time to either have another go at the Ptolemy’s or to shore up the East and baring a few success’s it usually ended up badly with a sudden vacancy for the crown.

And this is where the problems start.

Early on the kings had always managed to secure a strong succession with their designated inheritor already in place and who was supported by their own followers; it’s when the King meets an unexpected end that it starts the self destructive ball rolling. At first it is usually because the next king is under-age and their Regents then try to cling onto power or sometimes it’s that the Queen mother favours another son instead of the next in line. Civil wars now become common on the demise of a king and this weakens the empire bit by bit. This state of affairs gets even worse when it changes to being a perpetual battle between two different branches of the Seleucid family; each round of war increasingly weakens the Empire as they fight it out down through the generations

It is now that we start to see the splitting away of large chunks of land, first up are the Judeans, in earlier times their troublemaking had been met with force but gradually over the years the various Kings had to keep them sweet with concession after concession until they are able to more or less declare independence, in fact they are even able to expand outwards by taking over nearby non-Jewish cities. More importantly we also see the emergence of the Parthians who free themselves from
Seleucid control and then they too start expanding outwards but with significantly more success.

Whilst the Empire is still relatively strong these repetitive civil wars eventually get resolved in favour of one or other of the claimants, they then consolidate their power and decide that its time to do something about the East and the Parthians. This is always a disaster, the King is then either killed or captured and the whole process starts all over again.

With the weakening of the state, each subsequent civil war takes longer and longer to resolve, now we see individual big cities starting to break away until the southern half of the empire which is along the Palestine coast is for all purposes abandoned. Small city states in the north and east are also lost either to adventurers or as semi-independent sub-kingdoms of Parthia. Even in the core area the big cities like Antioch are demanding more freedom and self-control and which the hard pressed Kings are forced to give into so as to keep them on-side.

Finally in what is now Syria and the only significant part of the empire remaining, there is a civil war that cannot be settled, neither side is able to gather sufficient forces to defeat the other and so a stalemate ensues. The end of the Seleucid Empire draws near, and much to my surprise it wasn't the Romans who pulled the plug as had I previously thought.

With this final civil war at an impasse, it isn't long before a combination of both natural causes and by 'some not ducking at the right time' that we end up with Phillip I as the last of the rival Kings still alive, his kingdom is however now small and he rules what is in effect a collection of semi-independent cites with very little power. When he too dies a few years later his son is just a child so Tigranes of Armenia gets invited to take over what’s left of the Empire; invited or not he was probably coming their way anyway as he was in the middle of a big expansion drive. His method of
control was with a light touch (hence the invitation I suspect) he spent a few years sorting out the mess but sensibly left the powerful cities to run themselves, as long as they paid their taxes/tribute he was happy, along the way a number of inconvenient Seleucid family members became ex-Seleucids; then he left, never to return.

The Seleucid Empire was gone.

Meanwhile our friends the Romans who had little or no interest in the Seleucid Empire and apart from making a few meaningless platitudes to various dynastic rivals that had appealed for their help had generally kept themselves out of affairs in Asia Minor. However in the north, Mithridates of Pontus had been stirring things up for well over a decade by either attacking Rome’s allies or by trying to expand into Greece, also organising the massacre of 80-150 thousand Roman citizens didn't help win friends in Italy(see Asiatic Vespers ). In what was now his third war with them he convinced his son in law Tigranes to help him out; this was not one of Tigranes best decisions.

The Romans decided to settle the matter once and for all and so sent a large army with good generals and soundly defeated them both, Pontus and Armenia were conquered and incorporated into the Empire. The Romans being the tidy sort that they are set about the complete restructuring of the East and this included what was previously the Seleucid Empire, Judea and everything up to the Parthian border.

All this may read more like a history rather than a book review but civil wars are very tricky to follow, especially if everyone is called Antiochus and there are thirteen of them!

Grainger does a good job in tracking each squabble especially given his limited resources, he relies a good deal in some places on coinage and his reasoning appears sound in most cases. The control of cities was key and as each major city had its own mint then he can track who was in power and at what time. When you capture a city then you need to let people know that you are now in charge, the best way to do this is to start making new coins with your face on them and fortunately for us there are plenty of examples which can be accurately dated. I also found interesting his comparison between Josephus’s accounts and that of I & II Maccabees.

There are a total of two maps and both are very poor, even worse than in Book 1. I am afraid this is getting a trend.

Overall then it’s a good read, it filled a gap in my knowledge regarding the Seleucids because after Antiochus III, I had more or less switched off. It also gave me some insight into several topics I had never considered:

How did the Maccabeans not only survive but expand? Their army was useless.

Where can I find more details to re-fight Early Parthian’s versus Late Seleucid? There were at least two big battles I wasn't aware of in quite major campaigns I also wasn't aware of.

If everyone is called Antiochus, who ducks when someone shouts look out Antiochus!
(Probably explains all the deaths).