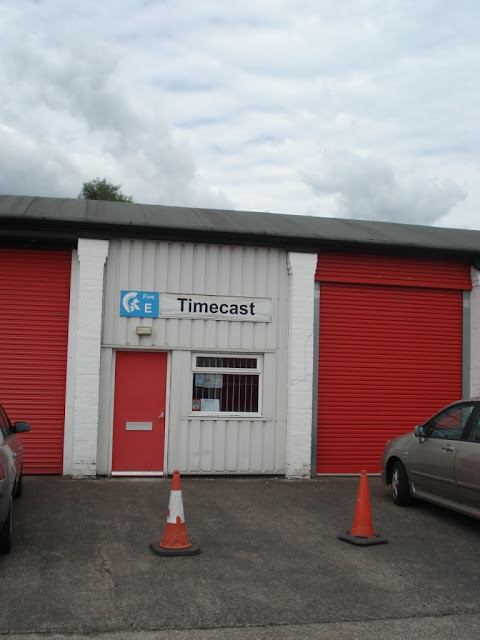 A year had raced by and all of a sudden it was time again for my annual days holiday, the one day in the year when I can get away from all the stress and drudgery that plagues the high powered executive nowadays , just switch off and let someone else make the big decisions for once , time to kick off your shoes and …. … hang on , something doesn’t sound right here.

It was a lovely sunny day for once and so I wound up the elastic band on the car, dug out the petrol recycling hose for later use , pointed the car north and set off on an adventure.

Planning ahead for once, I had earlier that week contacted Timecast, who are the UK stockists for Old Glory 15mm, and asked if it would be alright if I popped into their facility in Shrewsbury for a look around and as they had just received a new batch of stock from the States to also stock up on some more figures. I have just recently started on a new project, Ottomans v Russians in the 7YW era and as the website doesn’t have any pictures for these armies I really needed to have a look at all the Ottomans first before I laid out serious money.

The trip up, whilst lengthy, was very pleasant, I had decided to avoid the motorway and instead went up on the A49; and once I had struggled though Hereford it was very easy from then on as all the other main towns have now been by-passed. I could easily have spent double the time I did as there was something of interest catching my eye regularly, things that you just don’t see by using the motorway . Stokesay castle for example is visible from the road and looks well worth a visit on another occasion (Hmm, I do still have to buy all of the Russians at some time).

Well time was getting a little tight as I was fast approaching my 11.30 appointment and after a quick stop at a public convenience (or supermarket as others call it), I turned into their trading estate and easily found Timecast.

As you see I did take a picture (the header picture at top re-positioned by the Ed.) but only got one side in the frame, if you want to see the left hand side then it’s on their website and you can put the two together.

It had been a very worth while trip as I was able to see all the things I needed to with only a couple of my fall back alternatives not being in stock but unfortunately there wasn’t a lot of slack in my days schedule and it was soon time to go. I had planned to fit in a quick look at the nearby battlefield before trying to squeeze in a late pub lunch, I had to move on. So ten bags richer but quite a bit poorer, I took my new armies and some extra Coat D’Arms paint I had also bought, onto the next part of my day out.

Fortunately the battlefield is only 1.5 miles away from Timecast so it wasn’t many minutes before I was pulling into the signposted battlefield car park. The usual badly faded and hard to read display board was there as expected, it was obviously from the long distant past as the information I managed to decipher was completely useless, one thing you can say that has improved at National sites is the signage, I just wish they would go around to all the old ones that don’t have super star status and update the displays.

Well my sign told me there were two walks I could follow and that just around the corner there was an observation pimple; unfortunately apart from the general heading there was absolutely nothing about the battle or the troop set ups. Fortunately I had brought with me the excellent map from the Battlefields Trust (see link below) which superimposed the armies onto a current OS map. Their website is definitely something you should look at regularly to check on what is happening to our battlefields , not only to help ward off any new threats to them but to also see what events are being held, such as talks or walks etc.

Unfortunately I cannot copy it in so instead I have picked something a little different from 1892.


(Nice use of the term Insurgents) 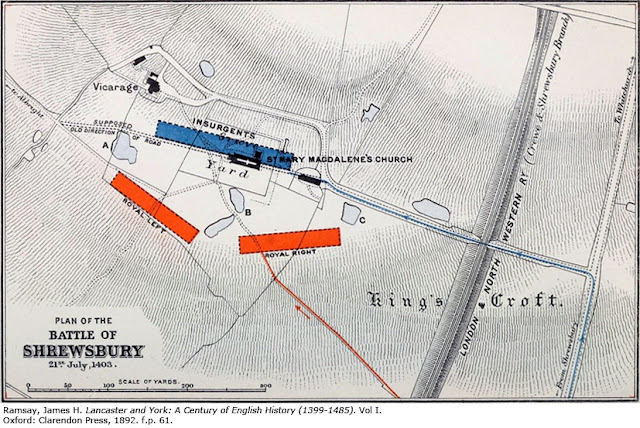 This first picture (above) taken from the OP Pimple shows what were pea fields on the day and where the Royalist Left would have been, in the distance can be seen St Mary Magdalene’s church sitting on the crest of a low rise.

In this second picture taken from ground level, the Royalist right would start at the end of the tree line and spread out to the right.

I am not going to give an in depth run through on the battle, I will instead do a very short precise and leave you several links to read if you wish.

On one side were Henry IV and his young son, the future Henry V, against them were the rebellious Percy family (Earl’s of Northumberland), very rich, very powerful and lead by the famous warrior Harry “Hotspur” Percy, so famous that they later named a children’s comic after him. The Percy’s main ally was the de facto ruler of Wales, Owain Glendower , so famous that they named a pub in Cardiff after him.

Everyone marched towards each other, Glendower and his forces were on route but didn’t get there in time and so all the Harry’s met up just outside Shrewsbury, the Royalist army outnumbered the Rebels who decided to sit on the small rise and defend; the Royalists attack uphill, Henry V get’s an arrow in the face, Hotspur loses and was killed.

This battle has also been recently covered in Medieval Warfare magazine - VI.2


Fortunately at Timecast had suggested that I drive on further up the main road and take the next turning down a farm lane as this would lead to the Battle of Shrewsbury Exhibition (Battlefield 1403). This is signposted and leads to a farm situated quite near to the church roughly in the vicinity of the Insurgents position on top of the rising ground. I don’t know the full story on how this came about but at this farm there is an exhibition hall covering the battle, entrance to it and parking are free and I guess the owners hope that you pop into their very nice farm shop like I did or stop for a coffee.
I can recommend the Shropshire Blue Cheese and the sausages.

Anyway here are some pictures 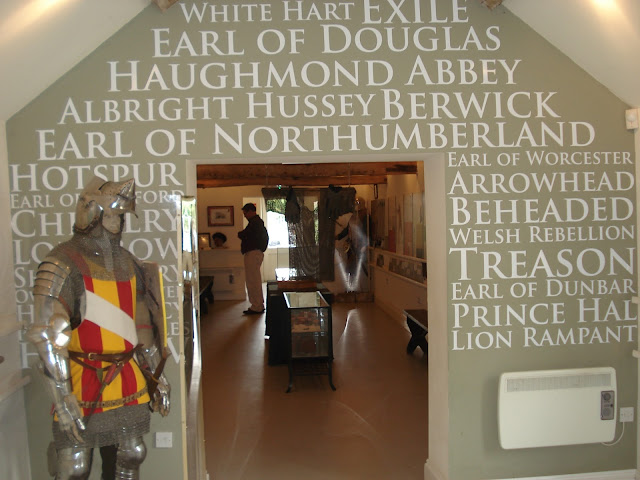 It’s not large by any means but it is well done and worth seeing, you aren’t going to spend long here but it’s far more interesting than just looking at some fields and people emptying their dogs. Off to the right of this picture towards the back was an interesting arrow display. (Plus an explanation on the best way to take an arrow out of your future Kings face) 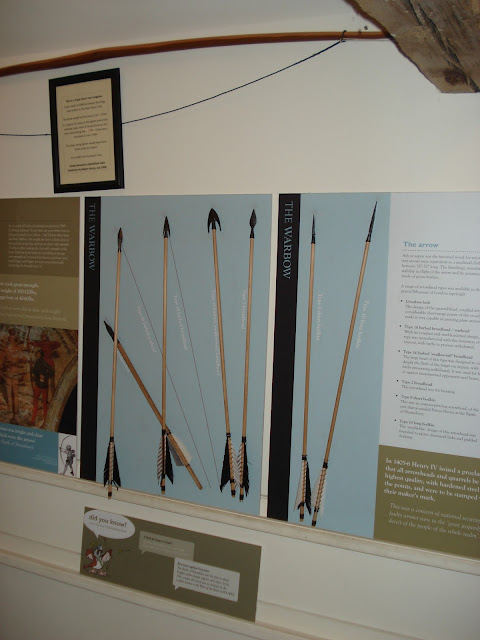 Well that’s about it , Lunch was getting dangerously close to being missed so I started off back home with one more small detour on the way , the only fighting done at this location however was me having to restrict myself to one pint of light beer.

This has been a ‘Day out with Mr Steve’ Presentation
Posted by carojon at 10:40