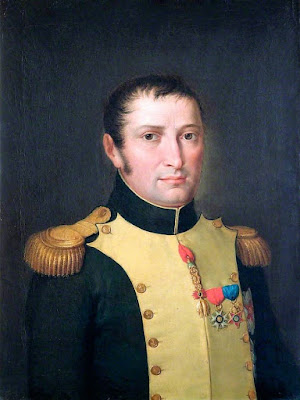 The Emperor Napoleon's elder brother, Joseph, was a lawyer and French diplomat before being appointed King of Naples by the Emperor following his occupation of the territory in 1806.

When the French invaded Spain, Napoleon, in some desperation, turned to Joseph to become his puppet King following the abdication of the Spanish Bourbon Royal family and somewhat reluctantly Joseph agreed to take the job entering Madrid on the 20th July in the wake of Imperial French forces. 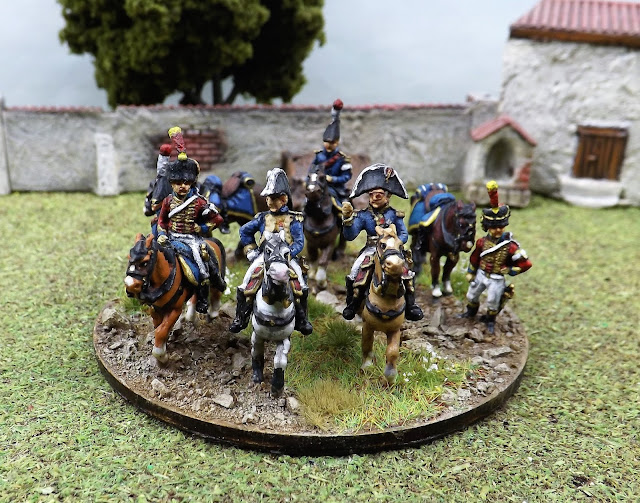 What followed was popular uprising against French occupation, forcing the Emperor to enter the country himself in 1808 to restore the French position before turning it back over to his Marshals in early 1809, forced to deal with a new war with Austria. 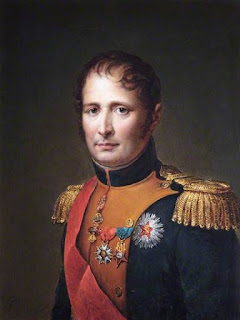 Joseph was not a soldier and Napoleon never intended for him to command in Spain, hoping to leave the subjugation of the country to his Marshals who were very experienced and had no intention of allowing Joseph to interfere with their operations.

As the French forces sought to defeat the remaining Spanish armies following Napoleon's lightning campaign, they only hardened Spanish resistance with their rapacious habits of terror, theft, rape and murder against the civilian population, rendering Joseph's attempts at winning hearts and minds over to a new Spain governed under the Code Napoleon practically useless.

His early attempts to introduce legislation to curb gambling and heavy drinking, only encouraged a rumour that the French King enjoyed a drink or three himself, thus earning himself the nickname from Spaniards "Pepe la Botella" or Pepe the Bottle, a derisive name that became common parlance among all classes of Spanish society. 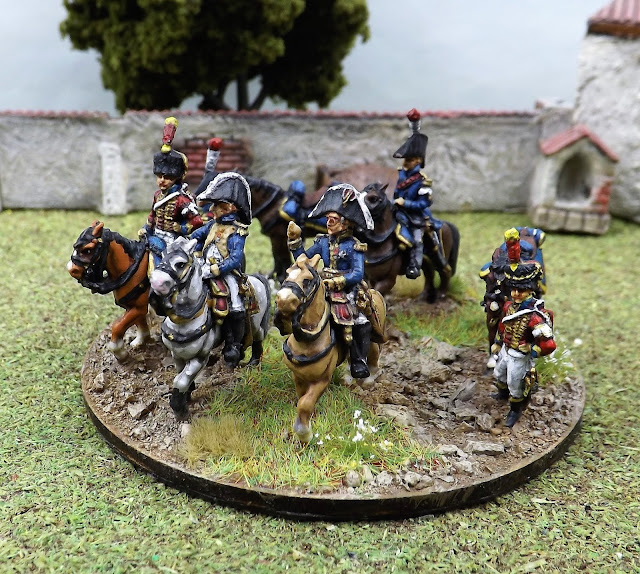 When General Wellesley and the British army re-entered Portugal in 1809 and defeated Marshal Soult, Joseph's frustration at his inability to command and co-ordinate the Marshals drove him to take action by putting himself at the head of French forces defending his capital, Madrid, and prove his military credentials and thus assert his authority.

Talavera was to be the first battle at which Joseph was present and supposedly in command, but he can be forgiven if he struggled to assert himself over his commanders given the undermined position his younger brother had put him in. 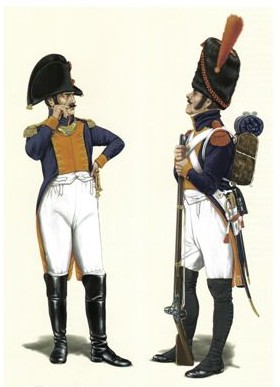 I have modelled Joseph on a suitably dappled white charger dressed in the uniform of a Colonel of his own Spanish Guard Grenadiers, whose look mirrored that of of the Emperor's guard all be it with buff instead of white facings. As you can see this has been interpreted as an orangey buff to the more lighter version seen in the top portrait which is what I decided to go with. 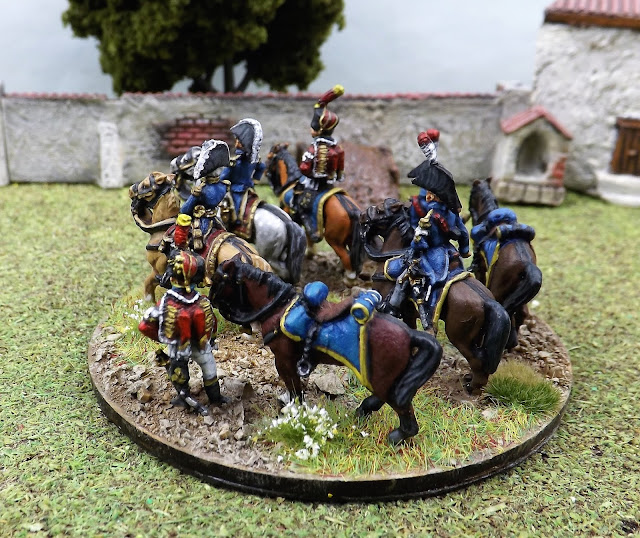 To capture Joseph's appearance I decided to use a French mounted officer with a head swap using a senior French general officer in bicorne. 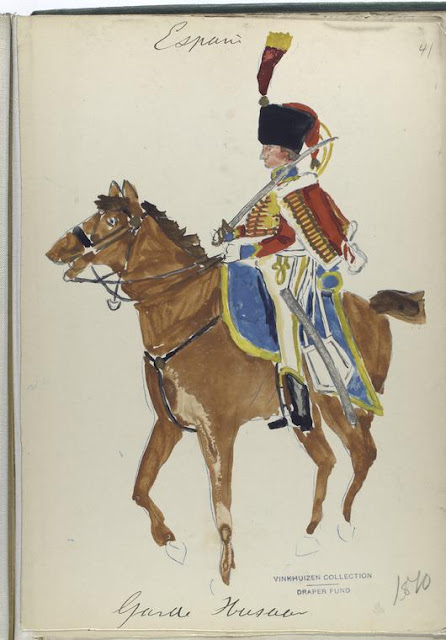 Accompanying the King is his senior military advisor, the greying Marshal Jourdan, together with members of the Spanish Guard Hussars and Imperial ADC's wearing white brassards and white and red plumes worn by members of the senior commanders headquarters staff to distinguish them from other staff officers. 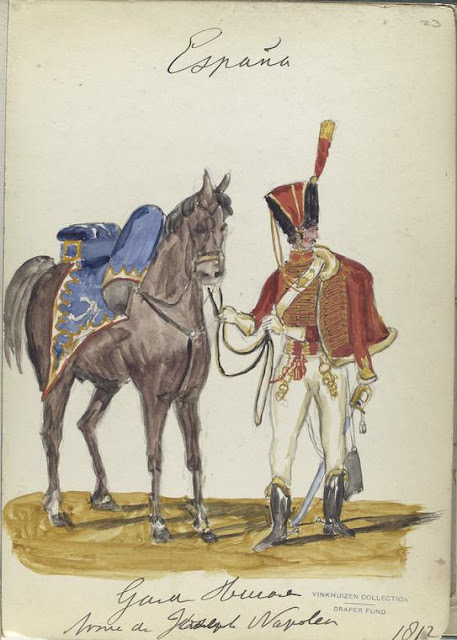 Jourdan joined the French army in 1778 as a private soldier, serving in the American War of Independence and was present at the siege of Savannah in 1779. Later he served in the West Indies where he, like many European soldiers, became ill which forced a return to France and him to leave the army in 1782.

In 1789 he returned to the Colours and joined the Revolutionary National Guard and quickly rose to General de Division in 1793. From 1794 to 1795 his star was in the ascendancy as he led the 70,000 man Army of the Sambre et Meuse defeating the Austrians at the Battle of Fleurus and taking Belgium and the Dutch Republic as the Allied forces were forced to withdraw. 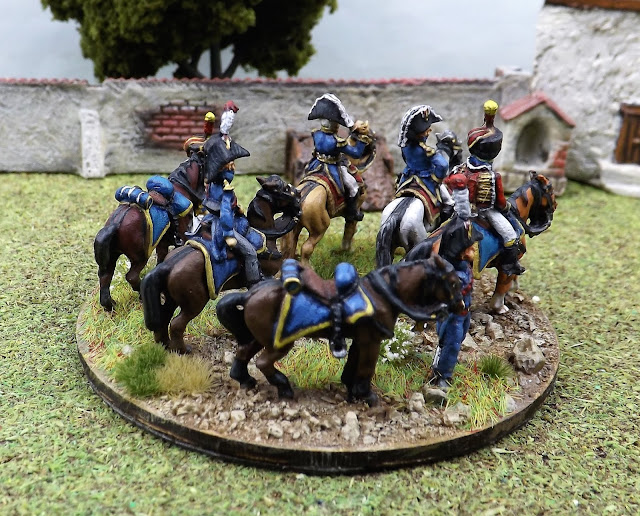 However 'fickle fortune' took a hand in the following campaign of 1796 when in company with General Moreau's forces pushing the Austrians back through Bavaria to the Austrian frontier, Jourdan was caught in a flank manoeuvre by a certain Archduke Charles and beaten at the Battle of Amburg. The campaign then went from bad to worse seeing the French forced back by the end of the year and Jourdan identified as the scape goat for the failure. 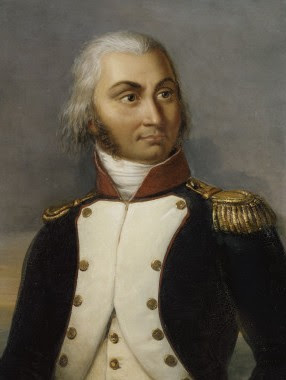 His military career then went on hold and he was forced to focus on politics, formulating the Conscription Law in 1798, later known as Jourdan's Law, before returning to military duties in 1799.

He opposed the 'coup' of  the 9th November that brought Napoleon to power as First Consul, but was soon reconciled with the new regime, being appointed Inspector General of Cavalry and Infantry in 1800 and appointed a Marshal in 1804 by the Emperor Napoleon, later overseeing command in Naples alongside Joseph. 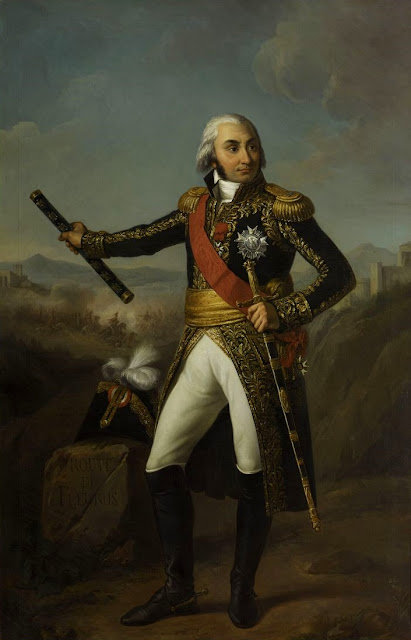 When Napoleon bullied his brother Joseph into taking the Spanish throne in 1808 he appointed Jourdan as his military advisor.

Jourdan was certainly an experienced commander and he is believed to have offered Joseph sound if somewhat cautionary advice. He was by 1808 past holding an active command of his own and like Joseph was unable to exert any influence over the other French Marshals. It was Jourdan who would again play the roll of scape goat for French failure at Talavera, being replaced by Marshal Soult after the battle, only to return to his former post in 1812 when Soult was recalled for the invasion of Russia. 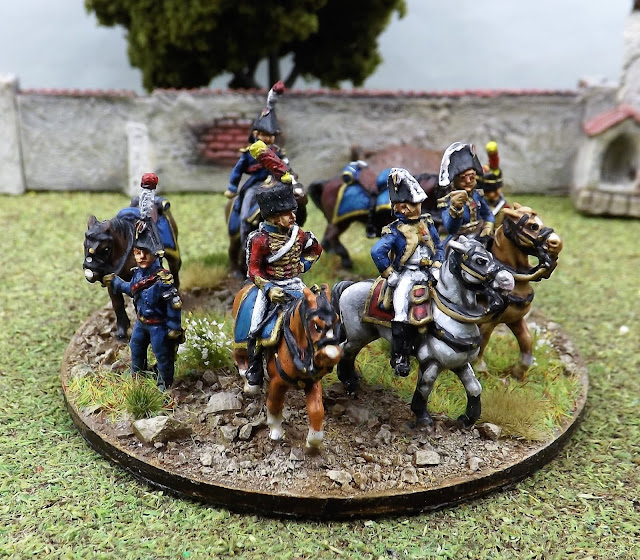 I wanted an older looking general officer model to represent Jourdan, he was 43 in July 1809, and so used the AB model of the bespectacled Marshal Davout, but gave the figure a suitably grey haired appearance as seen in his portraits.

Claude Victor Perrin, entered the artillery as a private age 17 and was noticed by a certain Colonel Bonaparte at the siege of Toulon in 1793 for his leadership qualities soon rising to the rank of General de Division in 1797. 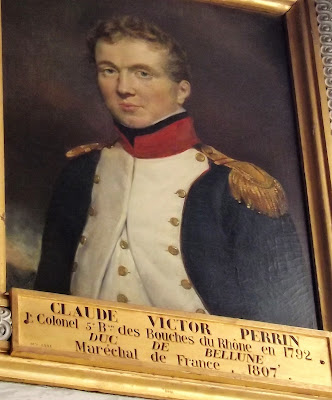 If Jourdan represented the old guard of revolutionary generals, then Victor certainly represented the new generation of ambitious young officers who were able to ascend to to high command under the patronage of Napoleon. 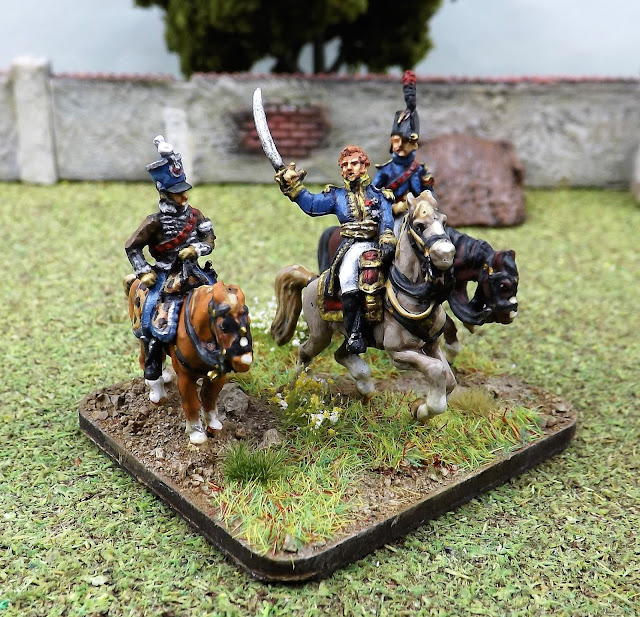 He particularly distinguished himself at the battle of Marengo and was present at the battles of Jena, Pultusk and Friedland where he again gained the notice of the Emperor whilst leading I Corps and was created a Marshal soon after. 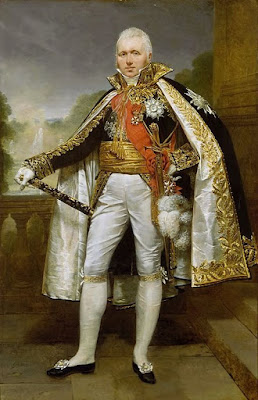 Victor led his I Corps d'Armee into Spain in 1808 defeating Blake's Spanish army at Espinosa and together with the Emperor spearheading the attack through the Somosierra Pass leading to the capture of Madrid. 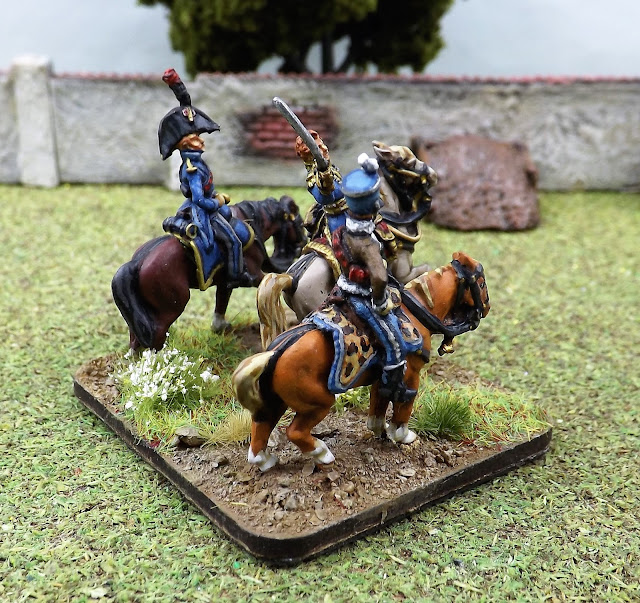 In 1809 he he won decisive victories over Spanish forces at the battles of Ucles and Medellin where in the latter he he defeated General Cuesta's 35,000 men with just his own corps of 16,000.

By the time of Talavera, Victor had won for himself a reputation for outstanding bravery and impetuosity which goes much of the way to explain how he came to have his way over the weak willed Joseph and the cautious Jourdan. 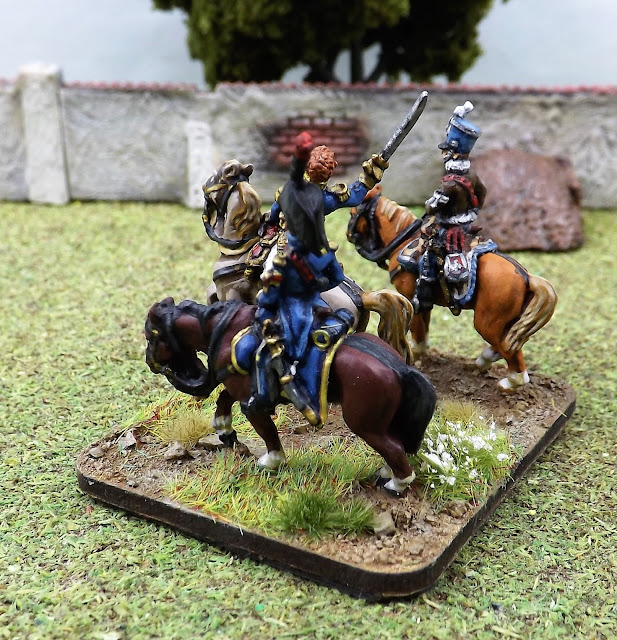 However Victor had never fought the British and he seems to have been totally oblivious about their tactics or abilities and his troops paid a heavy price for his ignorance and impetuosity.

For my model of Victor I chose to use the AB model of Marshal Ney as a suitable stand in as another of Napoleon's rather impetuous commanders. 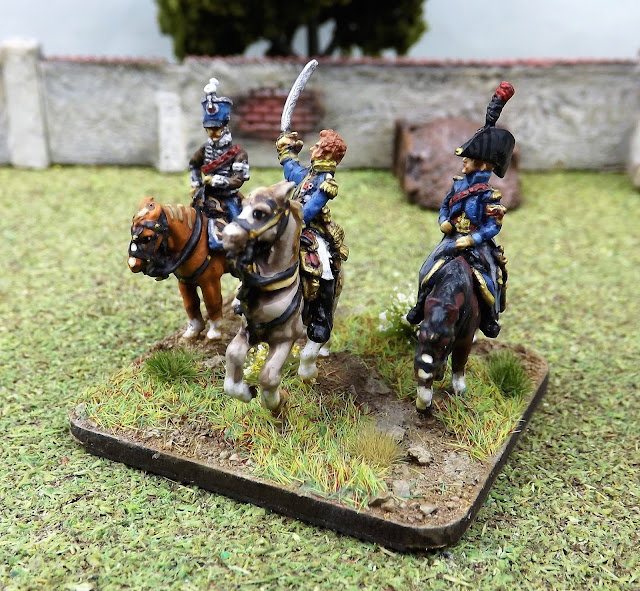 General Horace Francois-Bastien Sebastiani commanded IV Corps at Talavera. Like Napoleon, he was a Corsican and was commissioned into the army in 1789. 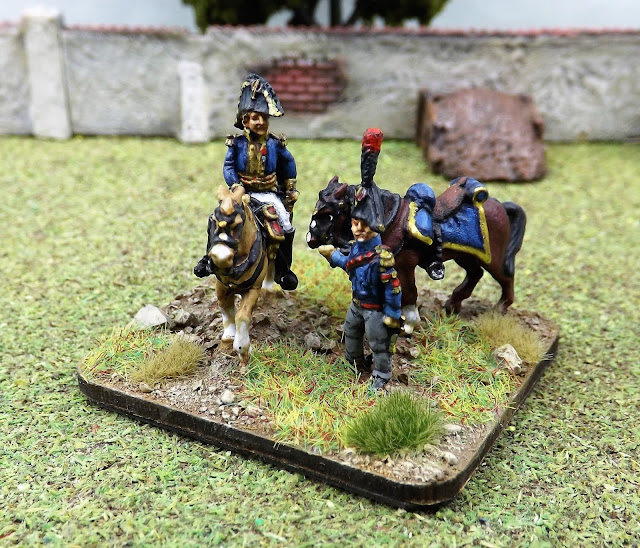 Sebastiani served as the future Emperor's cavalry commander in the Army of Italy during his Italian campaign and saw action at Marengo. After the campaign he was sent on his first diplomatic missions to Turkey and Egypt before promotion to General de Brigade in 1803. 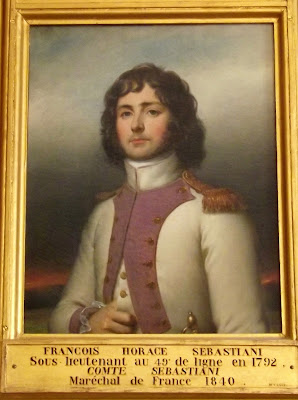 In 1805 he was wounded leading a cavalry brigade at Austerlitz and was subsequently promoted to General de Division. 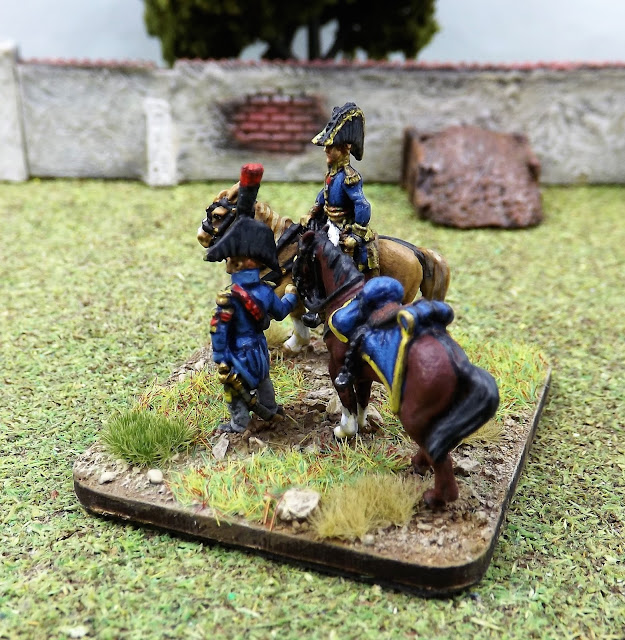 He then returned to the diplomatic corps serving as Napoleon's ambassador at Constantinople, before returning to the army in 1808 to command an infantry division in Lefebvre's IV Corps as part of the Emperor's Grand Armee for the invasion of Spain. 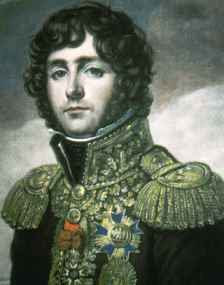 He saw action with his division at Zornosa in October in pursuit of Blake's Spanish army and at the end of the year was promoted to command IV Corps when Lefebvre was sacked for continuously disobeying orders.

In early 1809 he and IV Corps were deployed south of Madrid observing General Cartaojal's Army of La Mancha which in the March he successfully attacked and routed at Cuidad Real. 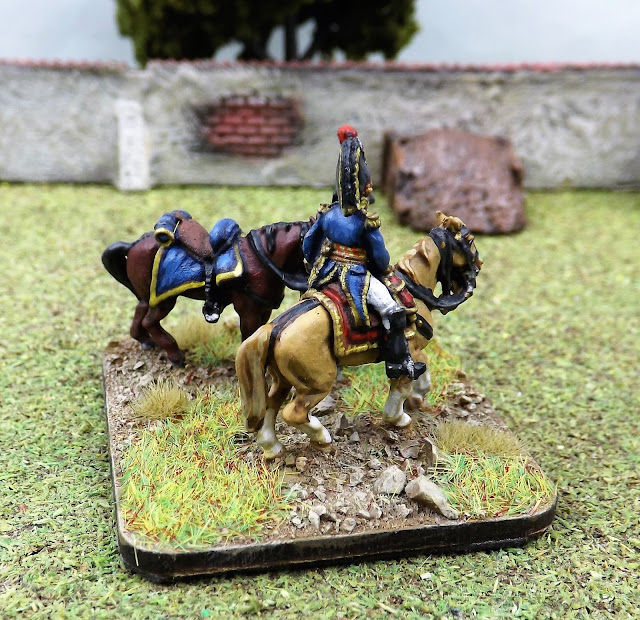 However the Spanish troops soon rallied after their defeat  and Cartaojal was replaced by General Venegas who was supposed to have detained Sebastiani and his corps whilst Wellesley and Cuesta moved against Victor at Talavera. He however skilfully slipped away from Venegas to bring his troops along with those of King Joseph to fight at Talavera. 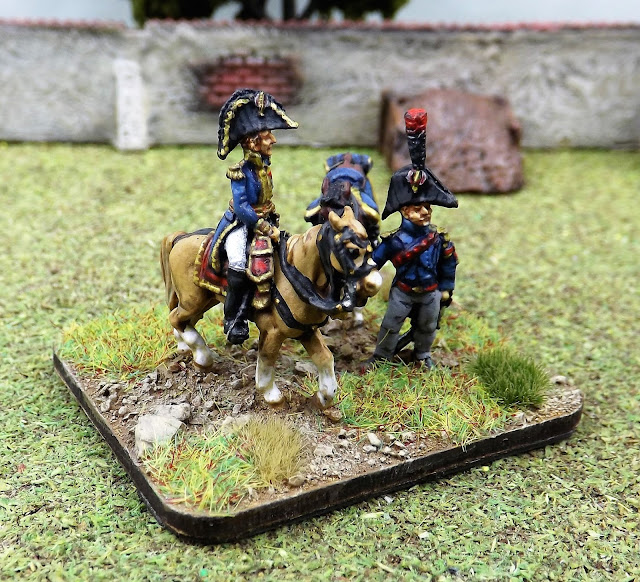 Sebastiani was more suited to leading a cavalry charge than high command. His corps acted with little cohesion during the battle, with the German Division becoming disorientated during its advance and attacking first when it was supposed to have attacked last in a plan to refuse the French left flank. However it was Sebastiani's own division that came the closest to winning the battle for the French.

I have modelled Sebastiani using one of the AB French general officer models accompanied by an ADC displaying the red brassard of an aide serving a General de Division. 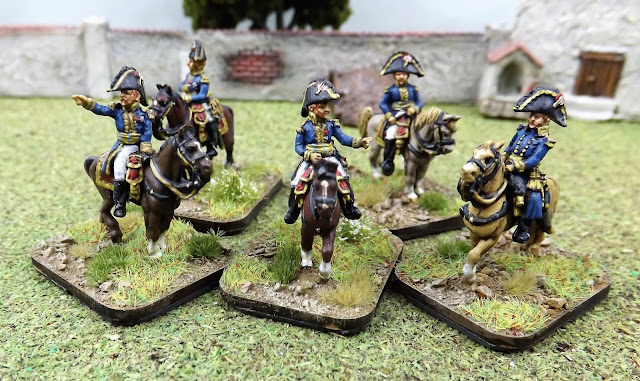 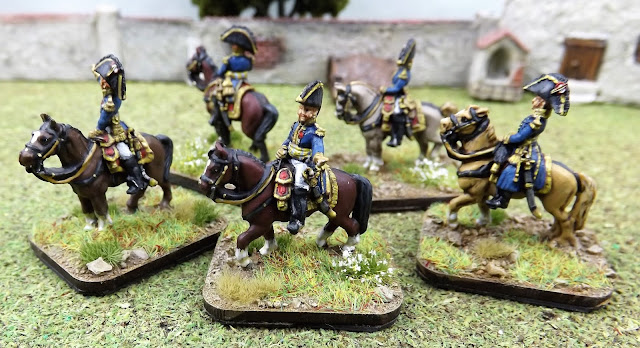 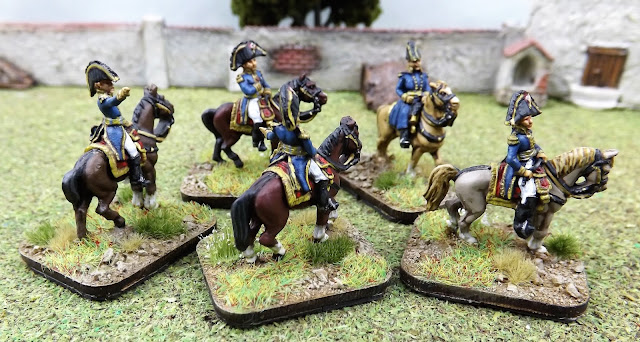 Alongside the senior French commanders are the balance of five French General de Brigade to complete the command of the French forces. 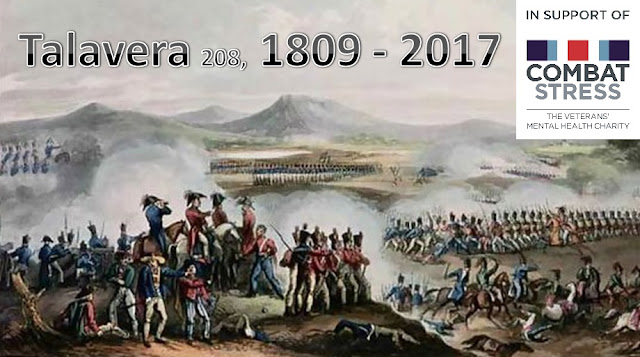 If you have enjoyed reading this post then add to your enjoyment by popping over to the "Talavera 208 Just Giving" page using the link below and make any contribution you care to, towards a great cause, Combat Stress, and enjoy the warm feeling that will come knowing you have added to the good in the world; not to mention the thrill when you see these command bases in action in 2017, and a message from me thanking you for your support. After all we are in that season when giving is what it's all about.