The Provincial Militia (Milicias Provinciales) were forty-two regiments each of one battalion except the Mallorca Regiment of two battalions.

The regiments took the name of their area of origin and detached their grenadier companies to form four divisions of two battalions in each. 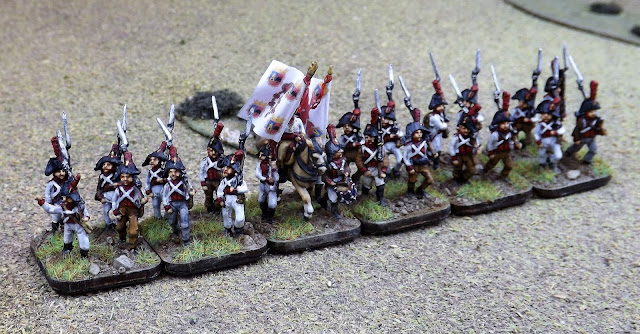 The role of the militia during wartime was to support the main field armies by acting as garrison troops, but were considered to be able to take their place in the line alongside the regulars when required.

In 1805 the uniform changed from a blue coat and breeches to the white seen in the accompanying illustrations with red collars, cuffs and turn-backs and gold lace and buttons for officers. 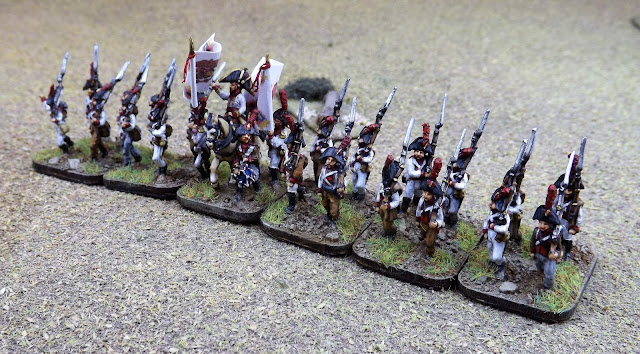 However, as highlighted on the following link, many of the Provinciales had not received their white uniforms when the war started with many described accoutered in the more common brown with red facings as illustrated in the units covered in my posts about General Portago's 3rd Spanish Division at Talavera.

The Provincial de Siguenza were one of the regiments that are reported to have been in their 1805 white uniform and I have depicted them, thus, but with a few brown clad recruits having joined the battalion by 1809. 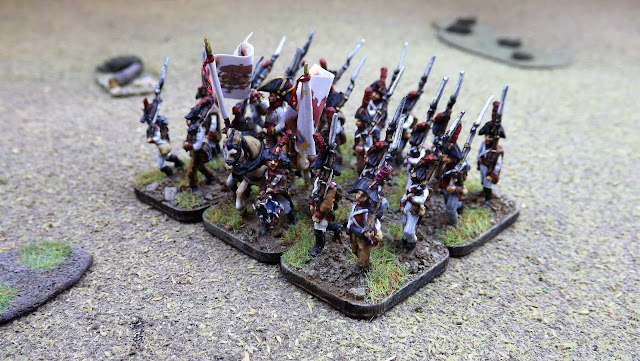 The appearance of the Siguenza regiment on the Spanish order of battle can be traced from the start of the war as shown in May 1808 with the Spanish forces mustering and those troops forming the Army of Andalusia. 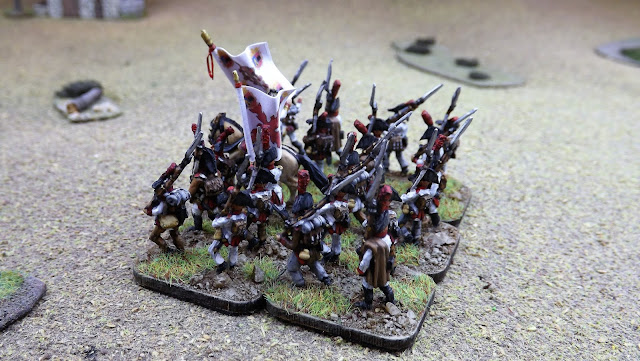 The Siguenza were, as many of the Provinciale, popular formations with the people compared with the national army, and most show good up to strength numbers. 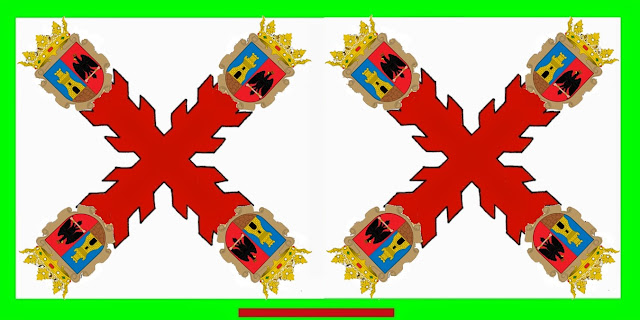 The Siguenza were, like the Africa and Murcia battalions who would stand alongside them at Talavera, part of Lapena's Reserve Division at Bailen in July 1808. 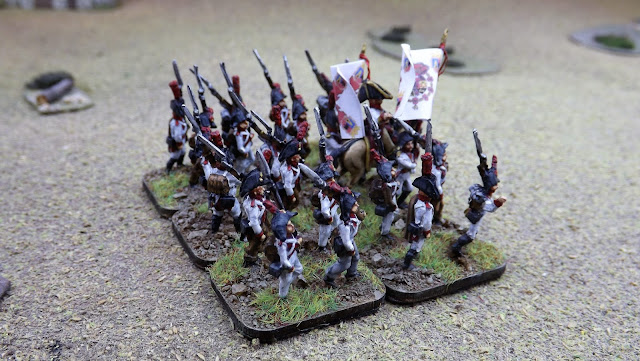 Many of the battalions that served with Castanos at Bailen would form the core of his Army of the Centre that followed up the French withdrawal to the River Ebro in the late summer and early autumn of 1808 and would later find themselves chased to the south east of Madrid as the Emperor led his Grande Armee back into the Peninsula that November. 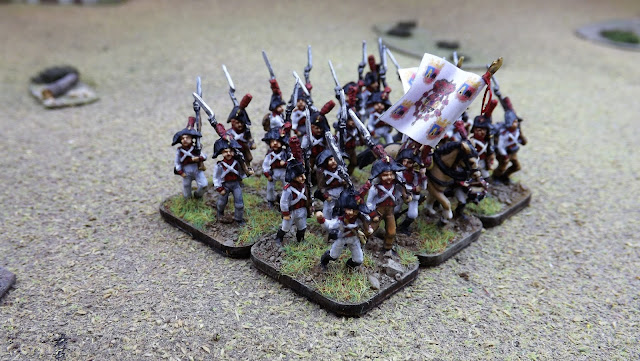 Following the reformation of the Army of the Centre under its new commander the Duke of Infantado in the December 1808 at their winter quarters in Cuenca, the Siguenza disappear from the order of battle and were definitely not involved in the Battle of Ucles in January which makes me wonder if they were left in Siguenza to recruit, when the Army of the Centre passed through on their march to Cuenca.

Either way the regiment does not appear in the orders of battle until April of 1809 when it is listed among the units transferred from the Army of the Centre to the Army of Estremadura with which it would be at Talavera in July 1809. 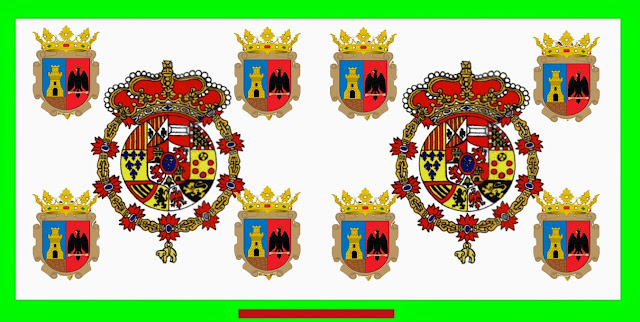 Forces Passed to the Army of Estramadura from the Army of the Centre by order of the Supreme Central Junta. April 1809 after the Battle of Medellin.

My Provincial de Siguenza are composed of figures from the AB and Warmodelling range of figures which helps differentiate their appearance from the regulars in their division, all composed of AB figures. 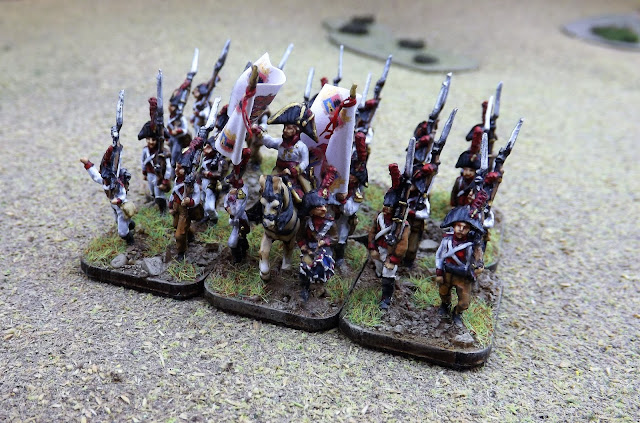 My Coronela and Sencilla are my home brewed concoction and I take no responsibility for their accuracy, only to say that I have taken the Siguenza coat of arms and applied them as required. They are posted here should others choose to use them.

So there we are, the final battalion of Bassecourt's 5th Division is finished and the pictures of the whole division on parade with General Bassecourt and Cuesta in attendance will follow.

As the first game approaches at the end of June, I will be finishing off the order of battle with the Spanish Horse battery of guns that accompanied Albuquerque's cavalry to the British left flank and will complete the project bar a few odds and end figures that will be added through the games.

This weekend I am off up to Lincoln and Newark for a weekend away with the chaps from the Devon Wargames Group. We will be spending an afternoon, guests of Wargames Foundry with a big game planned on the Saturday. Then it's a curry and a few evening games at the hotel in Lincoln before off to Partizan at Newark on the Sunday.

As always I will have the camera to hand with posts about all the fun and games to follow, and if that was not enough we have a book review to come from Mr Steve, so lots of things to come here on JJ's.

Sources referred to in this post:
http://www.eborense.es/batalla_talavera1809_ejercito_espanol.html
The Armies of Spain and Portugal 1808-14 - G.F.Nafziger & M Gilbert