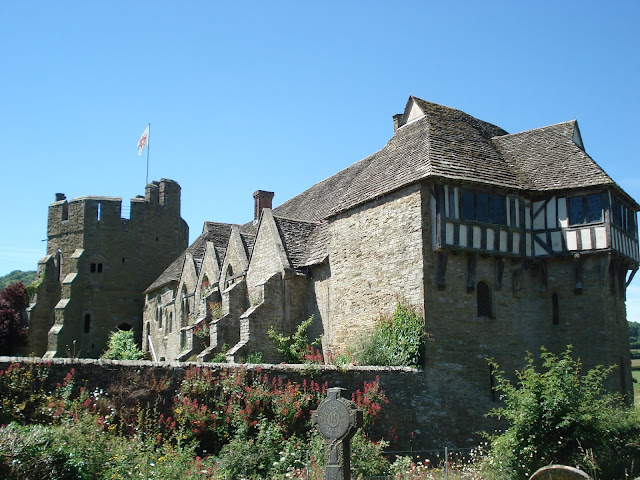 Back in 2016 on a day trip to buy a load of 7YW stuff from Timecast, I thought it would be a good idea if I arranged to come back for a slightly longer stay in the Shrewsbury area so that I could have a look at all of the interesting places that I didn’t have time for on the day. Well it took a little bit longer than I had originally thought but now with a hotel booked, a rough itinerary of places to see and more importantly excellent weather forecasted for the duration I was on my way.

I had planned a couple of stops enroute so as to break up the drive, the first of these was to have a look around Stokesay castle which is roughly eight miles north of Ludlow and is well signposted off the main road.

Stokesay is actually a fortified manor house and which fortunately for us survived the English Civil War mass slightings that afflicted most fortified places reasonable well, only losing its curtain walls which weren’t that substantial anyway.

Originally built in the 1280’s by a wealthy wool merchant, the Welsh border had quietened down quite a lot by the late 13th C but it could still be a pretty lawless place so Laurence of Ludlow combined comfort and showing off with a good bit of protection just in case.


Unfortunately there are no reports of anything exciting happening in these early days that I can tell you about so we rapidly move on to the Early 17th C. By now Stokesay had changed hands several times and the latest owner, William, 1st Earl of Craven (I haven’t heard of him either) splashed the cash and rebuilt the gatehouse to what we can see today.


Now we finally get to some action, well a little bit, actually none at all. During the English Civil War Stokesay castle was held for the King along with most of Shropshire and in 1645 when some Parliamentarians were marching past they paused to send a message into the castle asking for them to surrender; defiantly Captain Daurett who was the garrison commander refused, so the Parliamentarians stopped their march and formed up to lay an official siege. Once everyone was nicely lined up and had their hats on straight etc. they summoned the garrison again and Captain Daurett promptly surrendered.


Then something exciting did actually happen, a small Royalist force attempted to recapture the castle which was now garrisoned by the Parliamentarians. The counterattack was unsuccessful after a skirmish at nearby Wistanstow three miles to the north. Oddly this small battle is included in Warlord Games Pike and Shotte supplement ‘To Kill a King’

For such a seemingly popular battle I cannot find out much about it apart from the above and a few wargaming recreations, in fact it doesn’t even get mentioned on the Wiki page of the village which instead quite rightly highlights the time that Anneka Rice and Treasure Hunt came to the village.


Then, as became normal for many large manor houses, Stokesay slowly fell into decline and in 1813 it was said to:
“Have been abandoned to neglect, and rapidly advancing to ruin: the glass is destroyed, the
ceilings and floors are falling, and the rain streams through the opening roof on the damp
and mouldering walls.”

But by 1869 the Craven family were bankrupt and so all of their estates which still included Stokesay were sold and the new owner, a John Allcroft who just happened to be No.1 in glove making at the time and therefore extremely rich carried out extensive repairs, this coincided with the Victorians discovering tourism and Stokesay became popular. It is now in the hands of English Heritage.

Entrance as of 2018 costs £8.30 which includes an audio tour and £1 for parking. It is a bit pricey for the short time needed to see everything especially if there are a few of you; if you are a member of English Heritage then it is of course free.

As usual, more detailed information is available from the link below:

This has been a day out with Mr Steve
Posted by carojon at 23:54