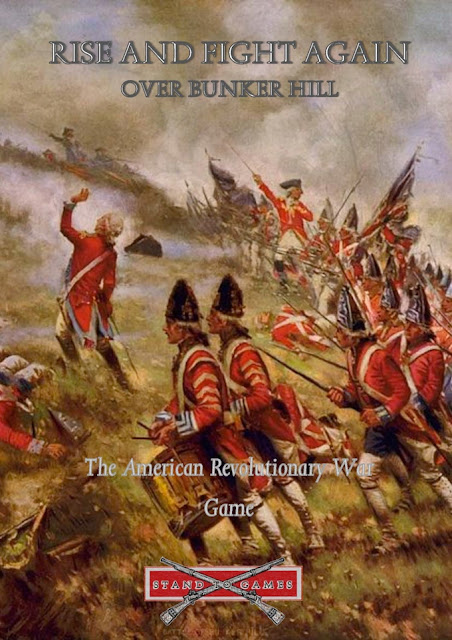 About a week ago both Steve and I received our copies of the new American War of Independence rules from Stand to Games, that follow in the wake of their initial offering 'Over the Hills' for wargaming the Napoleonic era.

If you are not familiar with the basic game engine of Fatigue Scores which I discuss in this post it might be worth following the link to our review of Over the Hills below.

Both sets are aimed at two very different horse and musket eras but incorporate the core rule system of unit fatigue as a common theme.

I stress that point because both Steve and I came at 'Rise and Fight Again' (RAFA) as reasonably experienced players of Over the Hills (OTH) and a simple reading of the new rules certainly gave a flavour for the changes between the two sets but as always it takes playing to really understand that difference.


As when we started out with OTH, we set up a simple table arrangement, not really seeking to play our normal game but more to test the rules to destruction if necessary and see if they could hit the sweet spot of feeling like a typical AWI encounter.


So as you will see we set up a sort of Guilford Courthouse affair with a line of American militia tasked with holding a tree lined ridge and delivering a good 'biffing' to the approaching redcoats whilst a second line awaited behind of Continentals waiting to finish the job.


The British force consisted of a typical early war line brigade and an elite brigade with Guards, Grenadiers and Light Infantry.

Each side had a unit of light cavalry and some light artillery in support to hopefully try out the effect of as many unit types as possible.


Before even moving a unit or rolling any dice a quick preparation read through highlighted some first major rethinks from our Napoleonic heads.

Firstly, the new command and control rules force some decision points right from the get go because the command radius of most brigade commanders will usually only allow two, possibly three, if you include artillery, units to line up and be in command.

This poses a question if your brigadier has four battalions answering to him, namely whether to have them all up in line with two of them on the extreme flanks out of command or to fight with two up and two back effectively halving the frontage and fire effect they could deliver but stay in command.


The command challenge forces a decision in that, out of command units failing a command test at the start of the move might fall back a move segment due to their confusion as to their role.

I decided to take the risk that my militia colonels knew their job was to stand and shoot at the damned 'lobsters' and only had my two centre battalions firmly under command.

The next question was organising our skirmish screens which the new rules differ from OTH in that each brigade can muster a skirmish 'unit' that represents picked men detailed for the job.

These units have a three base wide frontage and fight like any other unit except that they have a Fatigue Score (FS) of 4 or 5 for combat and shooting, depending on their quality and ability, for example my rifle skirmishers were on the higher end of that spectrum. However for taking morale and other reaction type tests they would use the FS of the nearest supporting unit from their brigade.

This rather emulates the light skirmish battalions we created in our Napoleonic games and I really like the skirmish battle and choices in when to call these chaps in, or not, as they also act as a very effective screen to protect your follow up formed battalions.


We managed to play through about eight turns, which was slower than normal because we needed to read through the rules and check our understanding as we went along and so our battle concentrated on the British attack to clear the militia from the tree line.

My decision to put all my troops in the 'shop window' paid off in that both my out of command flank battalions did their job and stood long enough to deliver several useful volleys, with one passing a reaction test to enter combat with the British Grenadiers needing a one or two on a d10 and passing with a one.

That speech I gave them about 'the rights of man, all equal in the eyes of the law', finished with a rising shout of 'no taxation without representation' must have done the trick!

The British carried the ridge after I had removed one of my battalions of militia using the 'Bush Fighters' rule to disperse them but still had the opportunity to have them back in my rear lines later in the game.

Despite their courage in standing toe to toe with the redcoats, coping with another American special rule of 'No Bayonets' and simply being militia which meant that the British were very often hitting them with an FS of 10 to 14 often taking out three or four of my chaps, whilst they were coming back with a simple 4 hoping to knock one of them down.

The loss of the second battalion in combat broke the morale of the brigade leaving the British on their jump off point for their attack to commence on the Continental line beyond.


However the British line brigade had taken a bit of a 'biffing' in its efforts to clear the Americans, through a combination of mainly skirmish rifle fire, militia close in first firing volleys and the odd casualty from the melees, not to mention fatigue from taking double moves to close and extra fatigue for entering the wood my chaps were sheltering in.

Likewise the British elites had taken noticeable casualties if much less so than their line comrades, leaving them dented for any plans on tackling anymore better quality Americans.

With the 'wee hours' drawing in we decided to stop and review the play so that I might offer some thoughts to you.

First off, we really liked the game RAFA has to offer and the changes between it and OTH that we got to play make this feel a completely different set of rules other than the familiar comfort blanket of having Fatigue Scores to work with when assessing combat and morale.

Based on our simple test both Steve and I decided that if playing the British in a similar situation, it is folly to simply allow all your troops to take a battering from second line militia, when one brigade would have sufficed leaving the other fresh and ready to take it to the next American line allowing the other brigade to act in a supporting role safe in the knowledge that the American force is one brigade down against its total force morale.

The skirmish game adds another level of play which allows both to look to soften each other up before the formed units get to grips, but also forces a decision point as to when to call them in and avoid them causing fatigue hits by being passed through or having them to make an emergency evade through their supports when the enemy are close in or, as described in the rules, 'Tremulation of Arms'.

The British in RAFA can't simply rely on musketry and it is probably wise not to try and fight with them as in OTH as RAFA are designed to encourage British tactics of avoiding costly exchanges of fire by closing quickly with the bayonet and deciding the issue, which they are very ably set up to do.

However beware of Americans occupying broken terrain and defences as they benefit hugely from its cover and winkling them out costs the British in fatigue hits getting in their to deliver a bayonet attack, which again promotes a British commander to at least consider a more traditional 'General Howe' approach of pinning and manoeuvre to get American troops out of favourable terrain into stuff where they can be dealt with in a more cost effective manner.

The command and control ranges really make this game feel quite distinct from Napoleonics and offers command challenges that I really enjoyed because, as we found, out of command troops can surprise you and occasionally even in control ones if, as Steve did, you throw the occasional, or not so occasional one. However that's friction and the best commanders expect it and do things to try and mitigate its happening.

The other thought that struck me after just this first play through is that keeping troops close by but not necessarily in harms way is important if quality is to overcome quantity. An intact reserve ready to keep pouring on the pressure after the initial hits have been delivered is a battle winning tactic with these rules as there are no massive cavalry corps ready to sweep in and turn the tide of battle.

This is very much an infantryman's war and attritive on the armies involved, so, if possible, keeping part of your force fresh would be a useful tactic to consider. 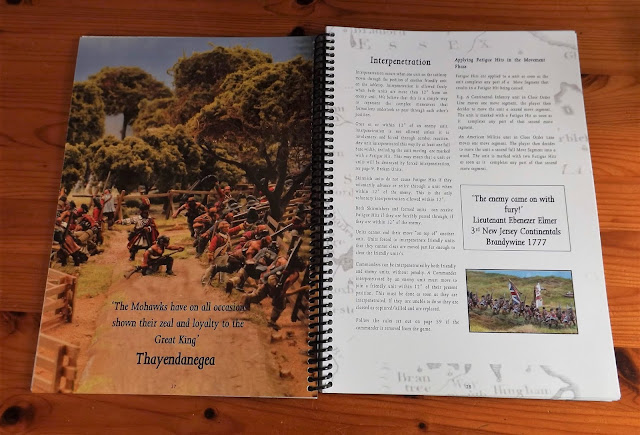 Finally we talked about some minor modifications/additions we are planning, to better suit our thinking for our games:


Following this first test game we are now ready to take this game to club which will feature in next months line up of games at the Devon Wargames Group.

On a last note I am going to resort to shameless advertising by highlighting a Peninsular War scenario book I have written with the chaps at Stand To Games for Over the Hills and is currently running on Kickstarter. 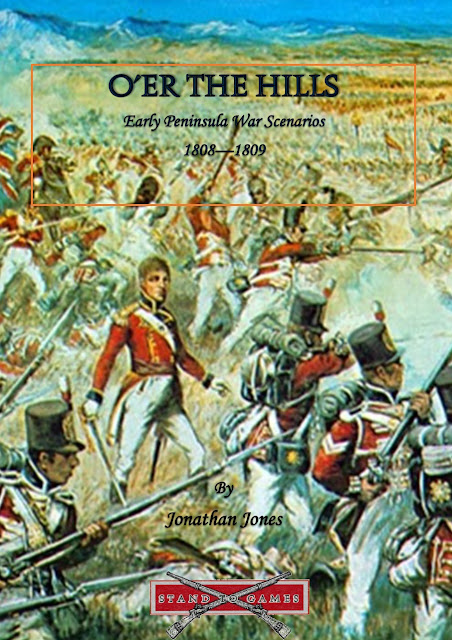 If you have enjoyed reading about the scenarios Steve and I played reported in earlier posts this year then you might like to support the venture and sign up for a copy.

More information can be found here on JJ's  on the link above and on the Kickstarter site by following the link below.