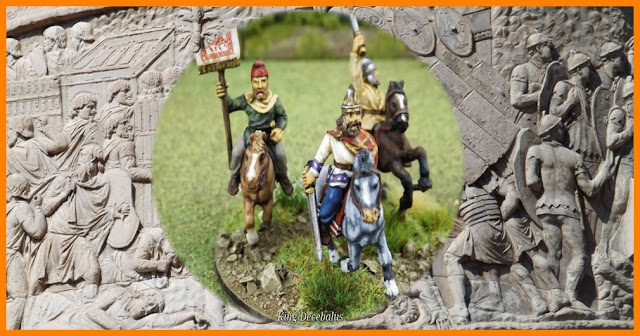 Another update on progress with the Romano-Dacian collection with additions to both the Roman and Dacian forces.

First up we have King Decebalus which is a conversion job using the Wargames Foundry mounted Dacian commanders but with my lead figure getting a head swap with a Warlord Games helmeted head to create the look of the great king. 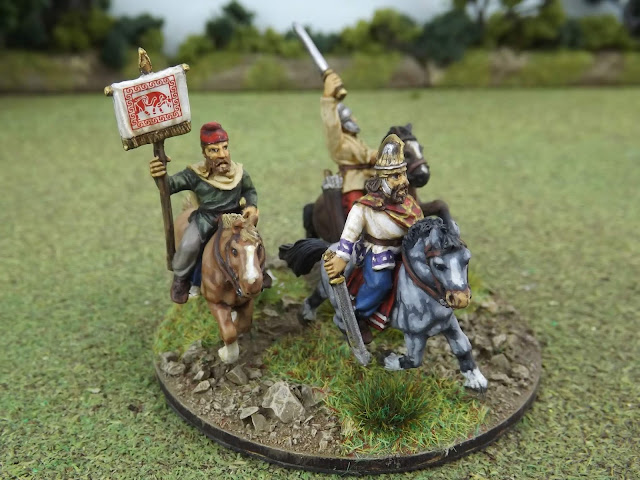 The king is accompanied by his standard bearer, again using the Veni Vidi Vici decal set BB3 from Magister Militum which offers some Greco-Thracian designs that may well have influenced Dacian designs given that there was a lot of sharing between the neighbouring cultures. 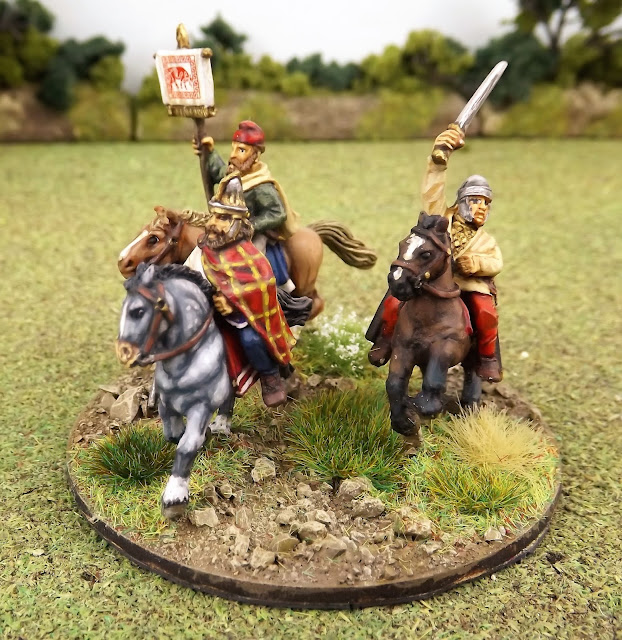 I was really pleased with how the head conversion turned out in the end and the horse is a particularly nice model which benefited from a suitably stand-out dapple-grey paint job. 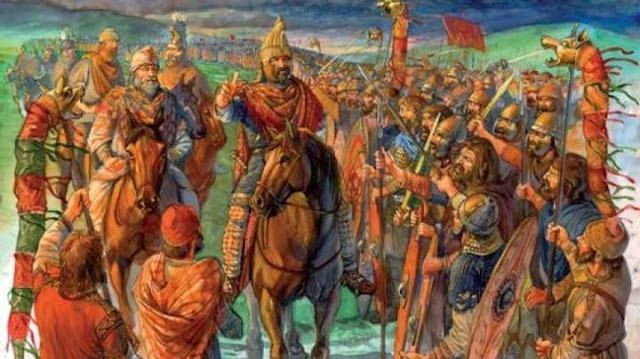 The picture in Radu Oltean's 'Dacia The Roman Wars Volume One' was the inspiration for this group. 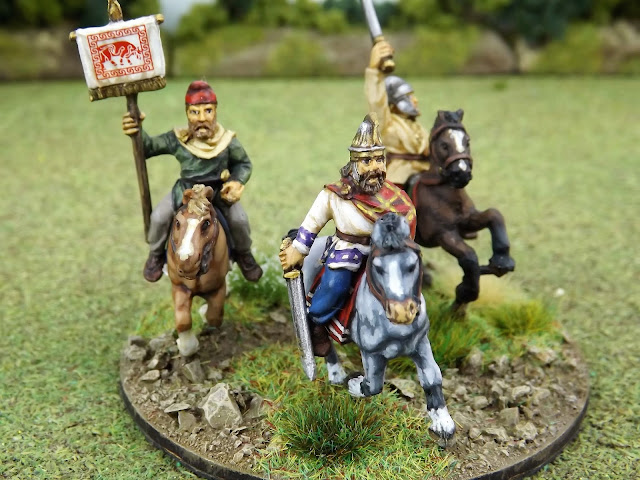 Next up, my Dacian host continues to grow, as does my knowledge on what works with these figures and possible conversions and range mixes. 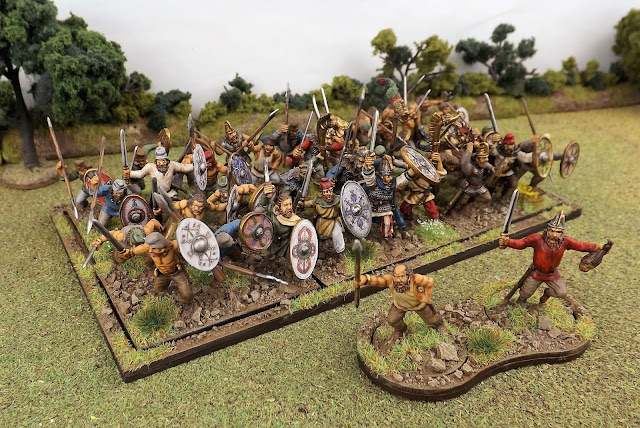 This is the fifth thirty-six figure warband created and leaves another eight to go which should make an impressive show when on the table en-mass.

I mention conversions and range mixes as this is my first group to mix Warlord and Wargames Foundry figures, plus I have been doing a bit of cutting and swapping out of hands and weapon arrangements to help create a more varied look between my different bands. 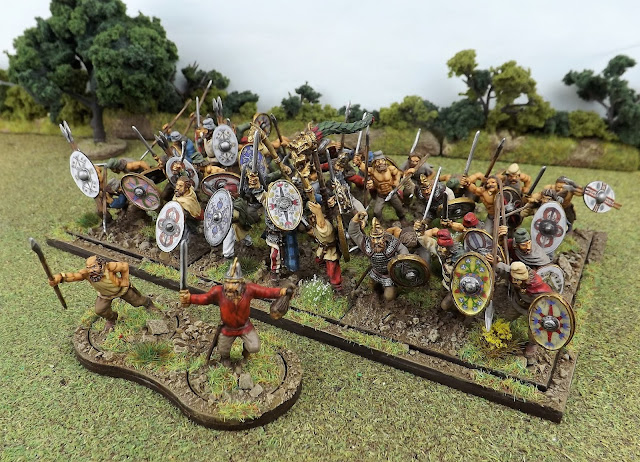 I mentioned in my post covering the first game using the collection at the DWG meeting a month ago that I was using tokens to indicate each time the warband used a brave warrior to add to their combat score in a hand to hand battle and that I intended to replace them in time with suitable figures. 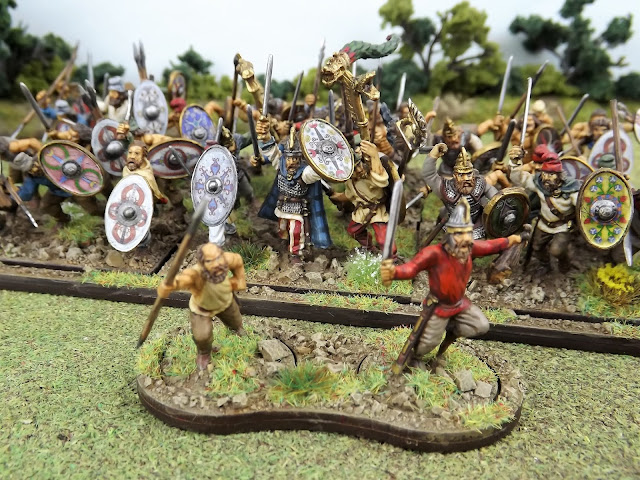 All my warbands now have two figures attached to indicate their allotment of brave warriors and they can be removed one by one as they are used. 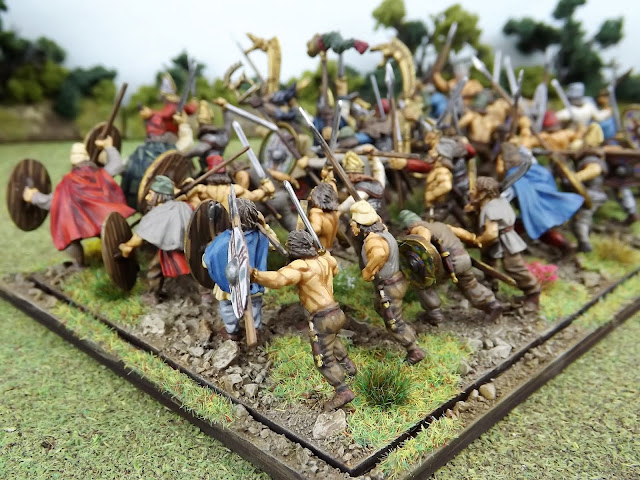 The individual figures will also come in handy to do some skirmish games with the collection as well. 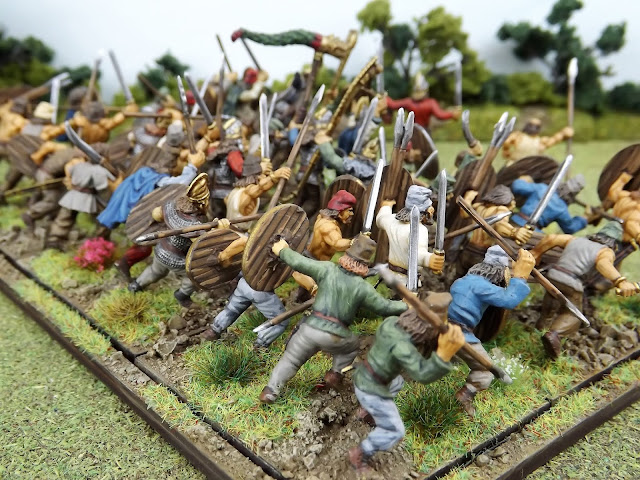 I was really pleased with how nicely the Foundry figures broke up the Warlord look and I intend to add more to each unit as I go.

I am also thinking about mixing in some casualties to add yet more interest for the eye to catch. 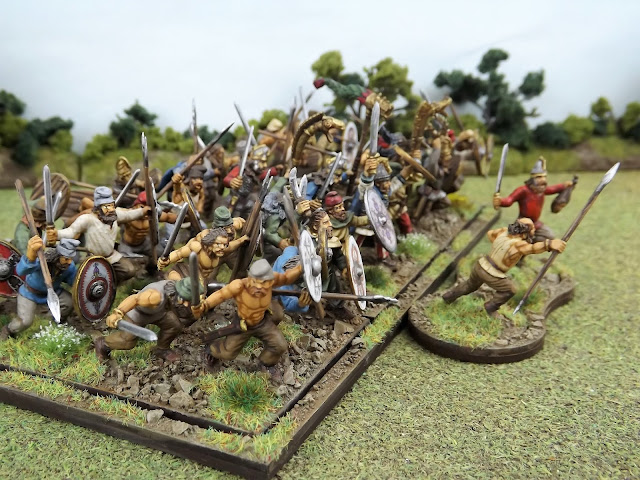 The Romans also got some new units added with another two groups of skirmishing archers and slingers together with a Cohortal command group for my archers. 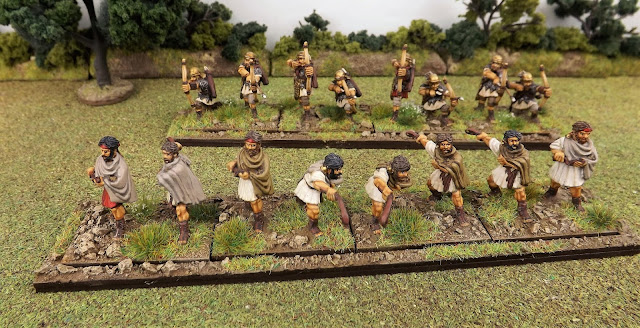 The inclusion of a centurion, optio, standard and musician enables two skirmish groups of auxiliary archers to be combined into a cohort to fight on table as another formed unit.


Of course even those these guys are armoured and carry short swords they don't have shields and were not designed to mix it with warbands or equivalent heavy infantry. 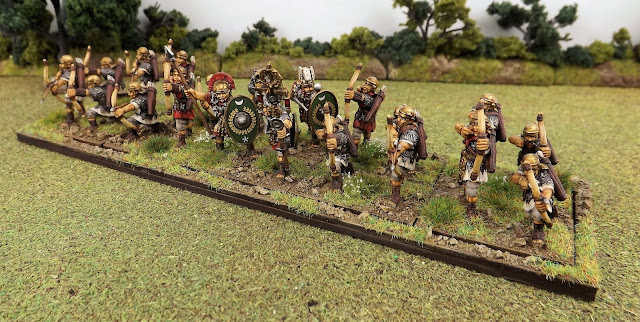 That said, it seems the Romans found a use for these combined archer cohorts to be able to deliver a significant amount of arrows onto a particular target when the fighting tactics required. 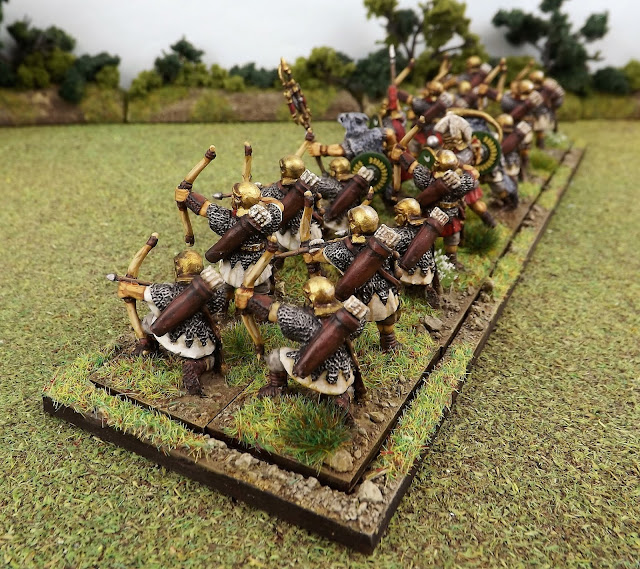 Specific examples might include Germanicus' battle at Idavisto vs the German tribes under Arminius where the archers were used in strength to break up the charge of the Germans before being met by the Auxiliary spearmen. 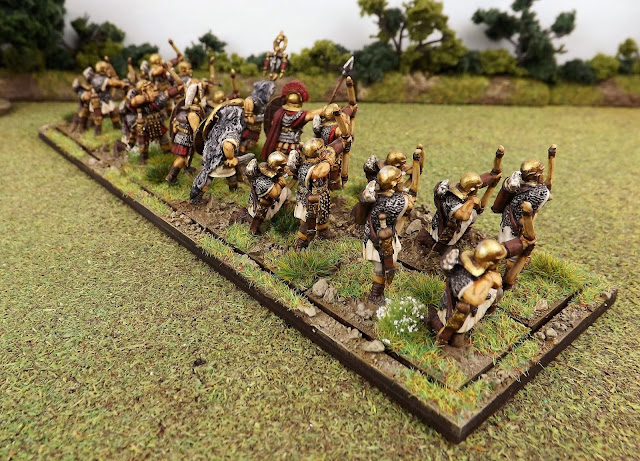 Likewise Arrian's tactics against the Alans positioning archers behind in-depth cohorts of legionaries to receive the charges of the cataphracts whilst firing volleys of arrows into them overhead.

Augustus to Aurelian facilitates the use of these combined formations and the cohortal acies that allow units such as formed archers to fire and retire behind their supports.


Lots to come on JJ's this month with a report on Clotted Lard, the Lardy Day this weekend at the Devon Wargames Group meeting, then I am off next week on another two day walk with Mr Steve along the border with South Wales taking in Offas Dyke and the Three Castles, then next weekend we are off to Colours which is always fun to do and report back on

In between I have another book review planned plus more on Chester and Roman London and maybe a few more figures painted up to talk about.
Posted by carojon at 04:02