As usual at this time of year with the holiday in between Xmas and New Year, as well as the opportunity to indulge oneself in the traditional festive over-indulgences, for wargamers, this can also include getting together with friends and getting the odd game or two in.

Traditionally I have got together with a regular bunch of the chaps that usually sees us travelling up to Chez Chas in North Devon for our annual festive fix of gaming and banter and last year saw us battling before the walls or Mordor.

The Battle of Mordor - Sauron's Revenge

This year saw a change of venue and corresponding change in theme as we gathered to experience the conviviality and good cheer at Chez Vince, closer to home in Exeter and moving the game theme from Middle Earth to Cimmaron in Gray County, Kansas in the year 1889 to play out our own version of the famous gunfight that occurred there between the citizens of Cimmaron and a group of 'lawmen' led by 'Temporary Gray County Sheriff' Bill Tilghman.

Tilghman together with some deputies or rather former Dodge City Peace Officers and other 'cowtown mercenaries' ready to earn a dollar or two for hire were directed by the new county clerk, based in the neighbouring town of Ingalls, to remove County Records from the Cimmaron Courthouse in a bid to undermine the former town's status as being the county seat, a position that could mean the survival of one town in favour of the other.

This operation was to be carried out using deadly force if necessary and not surprisingly resulted in the confrontation that resulted and so typified similar outbreaks of feud-style civilian bloodshed that became a rather familiar way of settling internecine rivalry in 19th century America as evidenced by several well other documented blood-feuds of the period, so beloved of Hollywood western film makers. 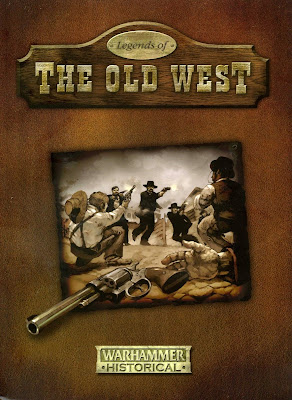 The rules we were using, 'Legends of the Old West', are a set that we have turned to before that offer the gamer a chance to easily regulate this style of game even with thirty plus figures on the table including characters and innocent bystanders and with four of us regulating the play between the various faction, but also offering the chrome and granularity that make these games the type we would want to play.


Our game began, as with the historical battle, seeing Tilghman and his gang loading up their wagon with boxes of county records in front of Cimmaron Court House.


The street was quiet with life going on seemingly as normal until curiosity in the strangers loading boxes on to a large wagon drew the attention of local townsfolk whose gathering soon became noisy and angry once the realisation of who these men were and what they were doing became common knowledge.

For our game each player took command of a faction consisting of about an equal number of figures, about ten plus a couple or so of significant character figures often with special abilities that enabled them to shoot or resist being shot better than the average mortal.


Thus we had Clive running Tilghman and his gang of 'so called' lawmen trying to get the wagon and its contents off the table and down the road to Ingalls.

Vince played a supporting role in that his local Mexicans had no love for the good folk of Cimmaron and though not directly supporting Tilghman were happy to lend a hand whilst driving their own agenda of breaking a gang member out of jail whilst also raiding the town bank.


Meanwhile Chaz lead the Cimmaron townsfolk, a mixture of well to do citizens, some particularly well armed with repeating rifles, mixed in with a bunch of 'town toughs' well able to mix it in a close and personal knife or fist fight.

I on the other hand lead the local 'sod-busters' union of farmworkers armed with the occasional shotgun, pitchfork and six shooter or a civil war vintage musket.


As the first shots rang out, the gang riding the wagon began to be very grateful for the small cover offered by the stacked boxes protecting those members of the gang riding on it.

However those less fortunate to be walking alongside it soon began to fall wounded or worse as they progressed down the street and succumbed to the sniping from the towns folk and farm hands.


Any gang member unlucky enough to be left behind in the wake of the wagon soon found himself assaulted by a following gang of town toughs, one armed with a rather large axe, and in this way three or for four of the gang were dispatched before getting half way along the main street.

In addition, driving the wagon could not have been a popular job as drivers, each replacing a fallen gang member who had had the job previously, came in for close attention from the musket and shotgun wielding Cimmaronians in each passing window.


As the battle in the street grew in intensity a gradual awareness took hold of a bunch of sombrero wearing, poncho clad dudes cautiously making their way up the street from the edge of town.

With an almighty bang and the collapsing of the town jail wall not to mention gunfire aimed at the Assay Office next to the town bank it became obvious that another force intent on mischief was operating within the town limits and so the fighting became spread to both ends of main street only adding to the confusion of innocent civilians trying to take cover intermingled with stampeding cattle released during earlier exchanges.


Tilghman and his gang continued to suffer losses in its progress along main street only gaining a little respite by being able to mount more members of the gang on the limited cover of the wagon as others fell to the fire around them.


With the battle progressing along the street as townsfolk and farm hands relocated in pursuit of the wagon, pressure grew on the Mexicans who having successfully released their comrade suddenly found themselves surrounded and coming under hand to hand attacks by multiple characters and seeing three of their number falling in rapid succession.

To make matters worse the gunfire delivered from the side window of the Assay Office proved particularly hot causing the Latin fighters to dance whilst avoiding the multiple shots and eventually seeing two of their number falling to the fire.


As the wagon approached the town limits, it looked as if the worst of the battle was over for Tilghman and his five surviving gang members as they entered the quieter Mexican quarter of town.

It was quiet because most of its occupants were busy elsewhere in town and in their absence a group of sod-busters, two with muskets and one with a shot-gun had moved into one of the houses close to the street and prepared a final ambush for Tilghman's boys.

As the wagon drew level with the occupied house all hell let lose killing the driver and bringing the wagon to a halt that saw Tilghman grab the reins in an effort to get the team moving whilst the remaining gang members poured rapid fire into the building wounding one of the musket carrying farmhands.


It took the gang two further moves to get the wagon clear of the building with one of the gang fighting an heroic rearguard fending off three citizens, but seeing another of the gang fall to fire from the building before getting clear.

At the same time the Mexican gang had had enough with up to half the gang dead or wounded and with discretion beckoning over valour.


Thus ended our gunfight at Cimmaron, a much more bloody affair than historically, with only three of the gang including Tilghman getting away but achieving a game winning objective of getting the County Records back to Ingalls.

My Sod-Buster union were awarded the freedom of the town and a round of well earned drinks on the house for having helped round up the jail break out and successfully defended the bank.

More importantly much fun was had by all and Vince's new wargaming room has been well and truly christened with much to look forward to with future games.

Thank you very much to Vince and Joan for making us feel very welcome, well fed and looked after and to the boys for a very entertaining fun game of wild west mayhem.

Lots more to come here on JJ's between now and New Year with a report on my next wargaming post Xmas game of Augustus to Aurelian as the new Romano-Dacian collection gets a run out on my new look table and my annual pre New Year look back at 2018 and the plans for 2019.
Posted by carojon at 04:47