The Battle of Mordor - Sauron's Revenge 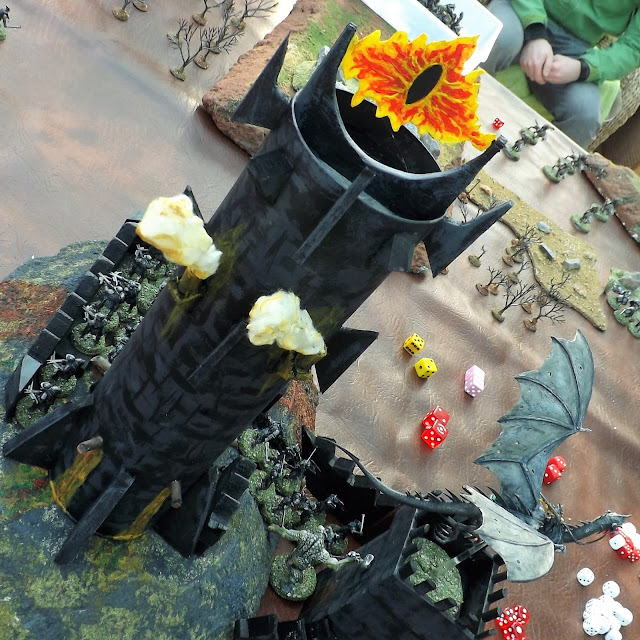 It started with rumours that a terrible force threatened the peace of Middle Earth, and that strange folk roamed the land carrying warnings of doom from Mordor, Elvish for 'North Devon' as it is now known in the Fourth Age.

Scholars came forth proclaiming that events would unravel and that the decision as to who would rule, Good or Evil, would all be decided according to the code, known simply as 'Dragon Rampant'.

The Fellowship gathered again in the Shire, Elvish for 'South Devon', and prepared themselves for the dangerous trek north, braving cave trolls and fearsome bands of orcs roaming the countryside west of Minas Tirith now known simply as South Molton. 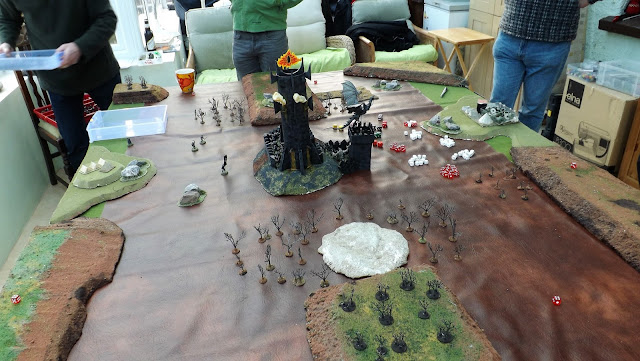 On arriving before the walls of Mordor it was evident that Sauron was very far from dead and defeated as the saga had been told and retold.

The eye blazed out yet again, though perhaps slightly dimmer than in times past which would explain the intelligence that two of Sauron's armies approached his stronghold carrying cauldrons of pure evil and spite designed to top up the tanks in the mighty fortress and pave the way for the production of even bigger armies ready to pour out of the city and head south to Exeter. 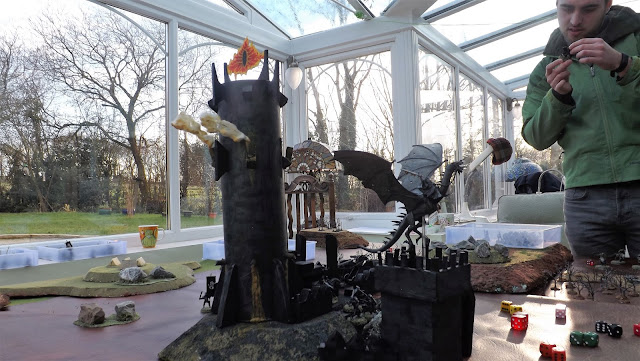 Not only was it imperative that the forces of Gondor and Rohan prevent the additional evil, making its way into to Sauron's lair, but that the Fellowship should engineer a way into Mordor and now, having recovered the ring from Gollum, who didn't fall into the crack of doom carrying the evil band but actually slipped it on and dodged round Sam and Frodo to leg it back to his sheek little mountain pad deep in the middle of Exmoor.

Once into the fortress the plan was the same, namely to drop that gaudy piece of bling back into the fiery crack from whence it came in the first place and allow the peaceful normal folk to go about their business of finding a good ale to drink and good weed to smoke, without fear of being grabbed by the balrogs.

The forces of Rohan and Gondor had mustered in good time and marched north ready to deal with this problem once and for all, camping either side of the fortress in preparation for attacking in the morning.

Sauron though, was wise to the plan and had summoned his armies to force march to his aid whilst lining the battlements with his orc guard and readying to sally forth with the Witch King aboard his favourite Nazgul, Simon, and the local bouncer, come gate guard, Roger the Troll that always seemed to raise a snigger from the orcs. 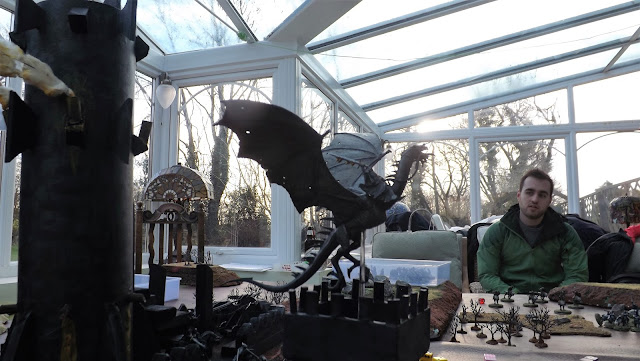 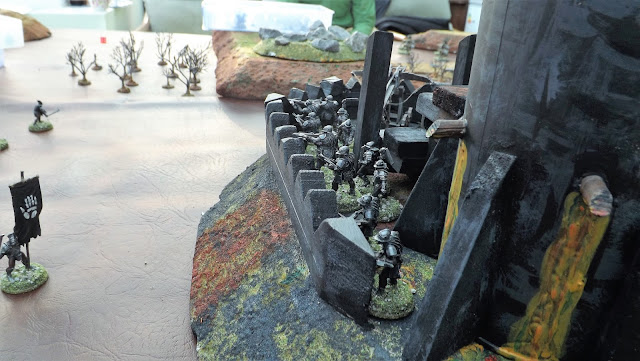 The four armies were conveniently arrayed on the high ground around the evil tower and city walls emitting foul smelling vapours and gushing torrents of disgusting pollutants that besmirched the land around killing anything it came into contact with. 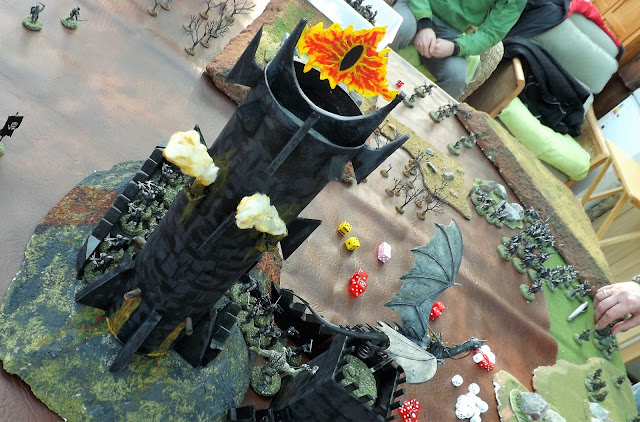 With roars of defiance from the opposing armies, the advance to battle was on, as the Riders of Rohan swept into the valley to be met by hoards of  mounted wargs with orcs wielding lance and bow. 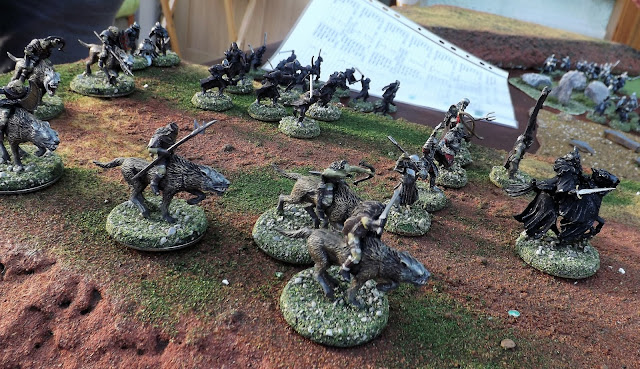 The advance into the valley by the men of Gondor and the Uruk-hai was somewhat less enthusiastic or perhaps that had something to do with some difficulty in getting the two dice rolled to come up with anything higher than a four.

So as usual it would be down to Gandalf and the Fellowship to make best use of the aggressive start made by the warriors of Rohan and force their way into Sauron's smart looking North Devon apartment block.

The riders of Rohan drew first blood sweeping in among the warg riders and decimating their ranks and beating up a black rider on the way in, not needing the attempted spell casting from Gandalf providing over-watch from the hills behind. 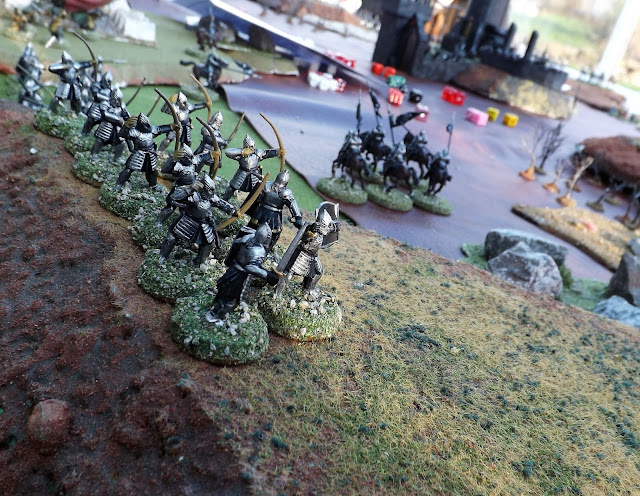 Meanwhile on the other flank the elite Rohan mounted guard waded in among bill carrying orcs after softening them up with a bit of bow fire.

This proved too much for King Theodan's champion, supposed to be standing by in case his support was needed and, before the King could utter the immortal words 'not yet', he was gone, smashing his way in among a bunch of Haradrim archers and then barrelling on into a big hairy bunch of Easterling warriors minding their own business and trying their best not to draw attention to themselves. 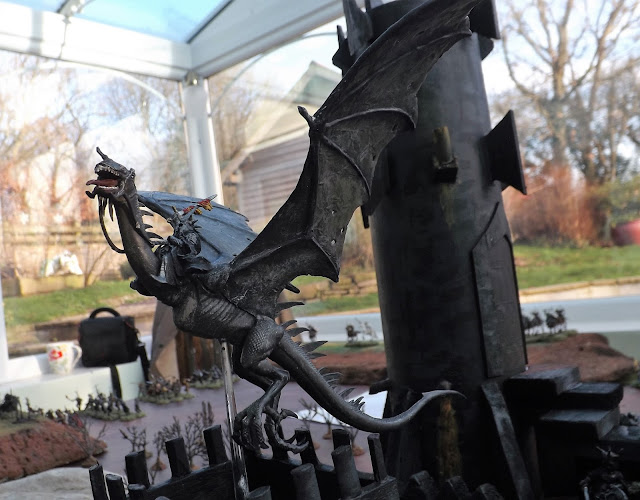 While all the fun was going on on their flanks the Rohan infantry advanced with the Fellowship and a big bunch of Dwarf warriors in the centre straight towards the walls of Mordor.

The orcs lining the battlements showered the attack with a good hosing of crossbow bolts to be met with return volleys from elvish archers. 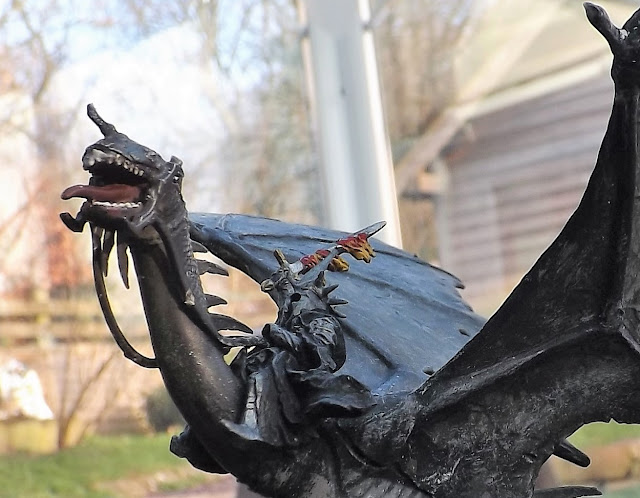 The Rohan and Fellowship attack caught the attention of the Witch King, swooping in on Simon the Nazgul, with Roger the Troll doing his best to keep up.

The elves were forced to redirect their fire skywards and their anti-air support at least drove off the Witch King only to see the elves get caught by a black rider coming in from their flank and decimating the unit. 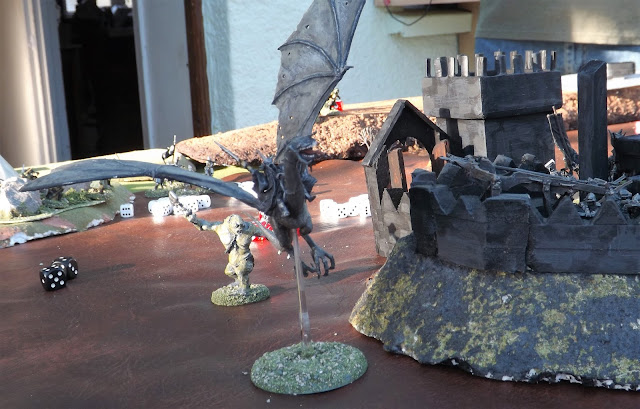 While the battle raged before the walls of Mordor, Eomer and Eowyn assaulted the walls along with their select bodyguard sweeping the battlements clear of orcs and driving on into the fortress only to be themselves driven back by the Mouth of Sauron and his elite fortress guard. 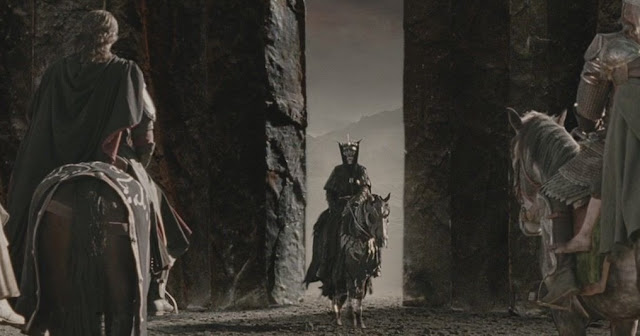 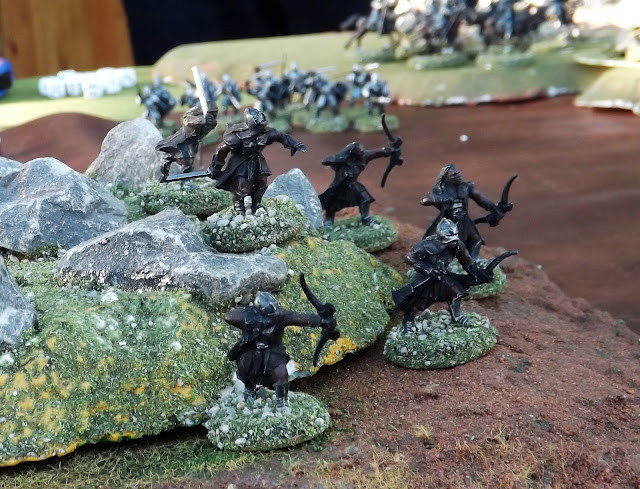 Both sides were well and truly battered, except the men of Gondor and the Uruk-hai who glared at each other and fired the odd bow. 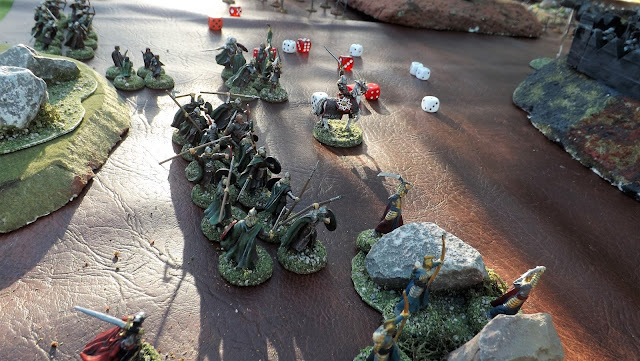 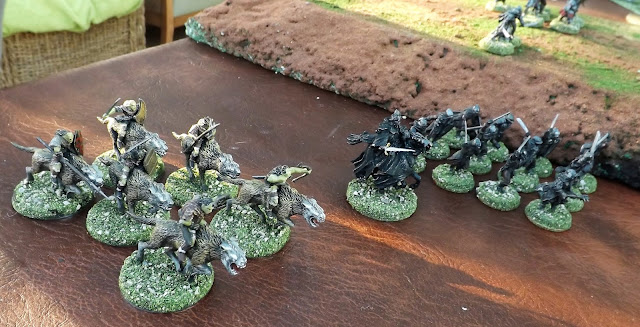 It was now up to the Fellowship to turn the tide of battle in that filmic way that only a four foot midgit and an old bloke with a long white beard can do. 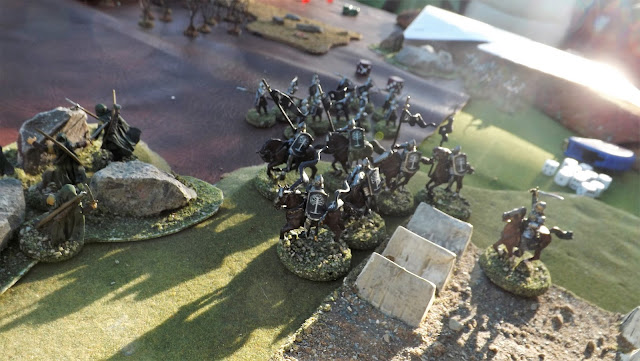 Aragorn led the attack replacing Eomer and Eowyn, as he smashed his way over the walls driving back the Mouth and his guard as Gandalf  moved to the centre and dealt with the Black Rider who had wiped out the Elvish archers. 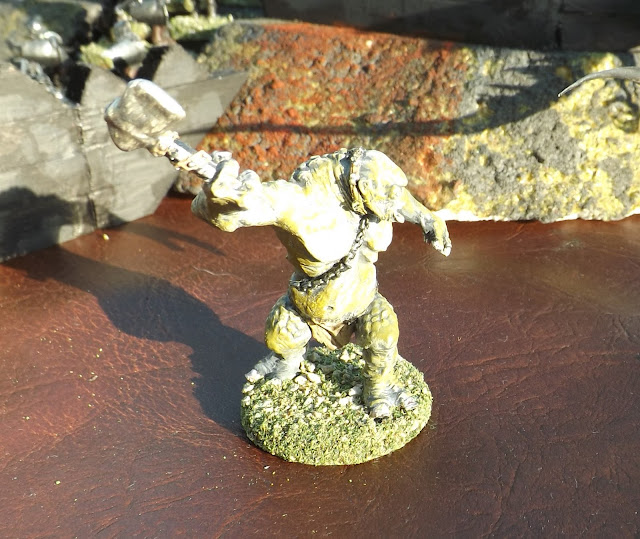 Roger the Troll tried to get stuck in but got badly spiked by the Rohan spearmen and a bit of Dwarf action and was forced back to get a plaster put on a nasty graze to his knee. 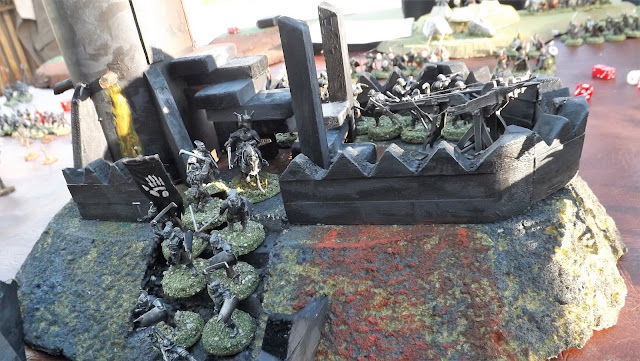 Taking full advantage of the mayhem and the fact that they were invisible until they involved themselves in any combat, the Hobbits followed Aragorn over the walls and tried to gain access to the tower un-observed. 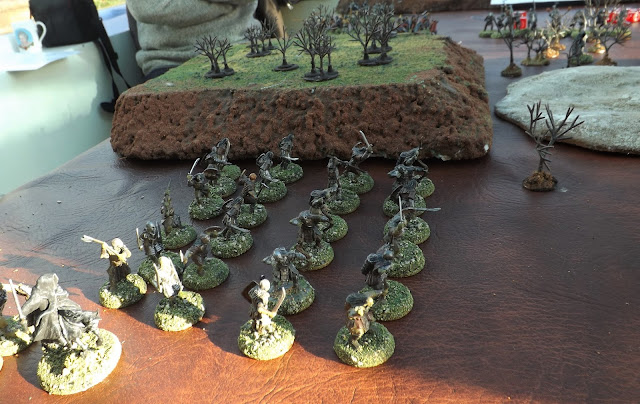 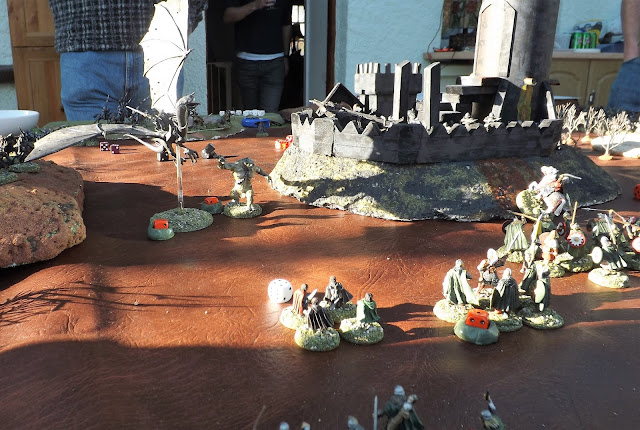 Surprisingly, considering that they were indeed invisible, the Hobbits progress up the steps to the tower door was suddenly blocked by the Witch King and Simon the Nazgul who decided to break off from attacking the warriors of Rohan and conveniently perch on the last narrow step in front of the door leading to the Crack of Doom. 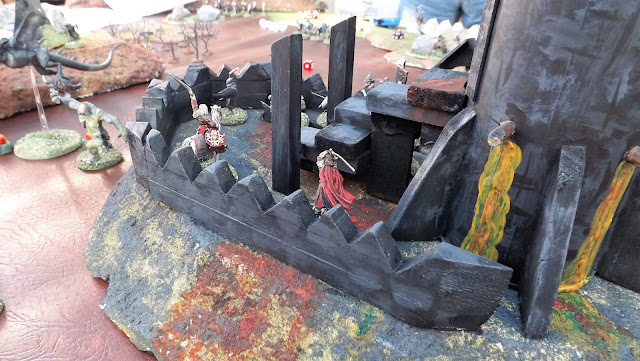 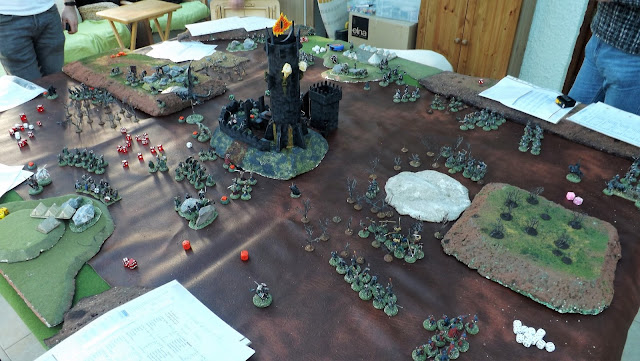 With no option other than to fight their way in, Frodo and his companions revealed themselves, drew swords and charged the Witch King and Simon the Nazgul, losing two of their number but adding to the hits already caused by Elvish archers and the men of Rohan leaving their path clear and victory in sight. 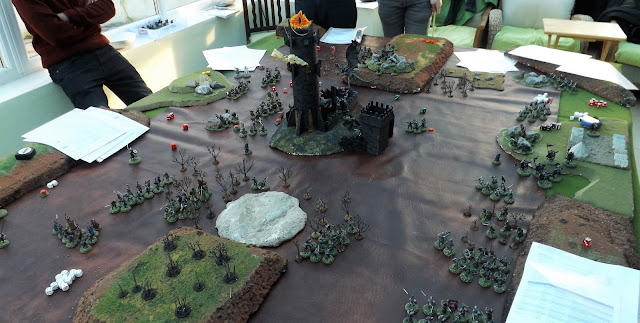 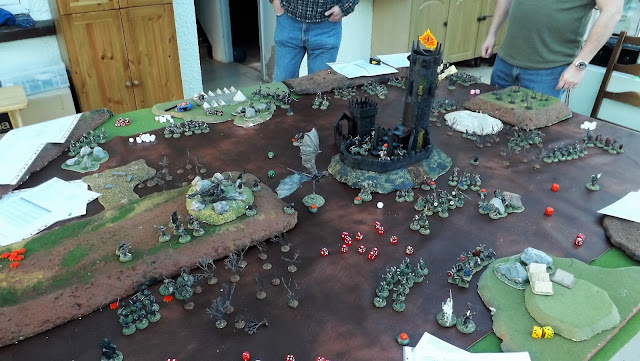 Of course after any combat our plucky heroes are required to take a 'Courage' test, only needing a five or more on two d6, which they and the other forces of Good had been rolling happily all afternoon.

So why you may ask did we end up rolling a four! I use the word 'we' loosely as it was yours truly that rolled the offending dice resulting in Frodo not completing his victory circuit of Mordor, not getting a lift home on the back of an Eagle and not retiring gracefully into the ranks of the heroes now residing happily beyond the sea in the west.

No it was deemed Frodo had lost his bottle or wits to Sauron's will, slipped the ring on and legged it off to Exmoor to become the new Gollum. 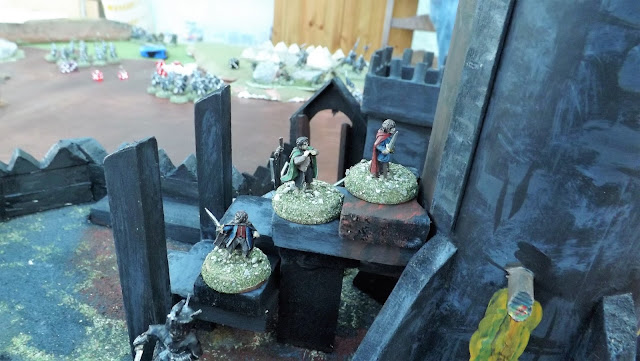 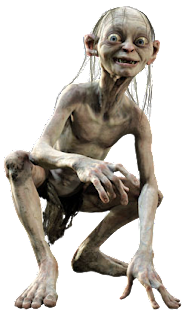 The Xmas fun in deepest darkest North Devon was brought to you courtesy of Chas and Clive putting together the terrain and Clive's figure collection, he claims is for his Grandson, and the other chaps from the Devon Wargames Group, Vince, Steve M, Tom, Will and your reporter JJ.

Happy New Year to everyone.

Email ThisBlogThis!Share to TwitterShare to FacebookShare to Pinterest
Labels: JJ's Wargames, Lord of the Rings