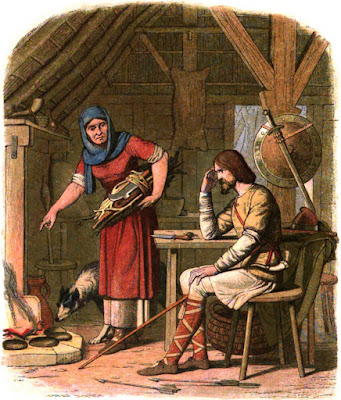 When I were a young lad growing up in Somerset, one of my earliest lessons at school I remember was the story of King Alfred the Great, on the run from the Viking army, and hiding out on the Somerset levels, planning his comeback.

The story included the tale of King Alfred being tasked with minding some cakes by a peasant woman and, finding his mind overwhelmed with the task before him, completely forgetting about the cakes and consequently getting a scalding from his host.

As a young schoolboy I seem to remember the cake tale as rather confusing, but not the idea that, had Alfred been taken and failed in his fight back, the history of England would have taken a completely different turn and I might have been having a lesson in a Danish dialect reflecting on what a great chap King Guthrum was.

The school lesson was of course a very simplified tale of the actual events as we have come to know them from the accounts of Bishop Asser.

That said the simplified school lesson version captured the key points which were that since the late 860's the Kingdom of Wessex was for intents and purposes the last remaining vestige of Anglo-Saxon control in what would become England with the rest of the land under the control of the Viking invaders.

The focus of that invasion had now turned towards Wessex and with a series of incursions from London, Reading and along the south coast had seen several battles that saw the Viking host make inroads into the kingdom and cause the death of Alfred's brother Aethelred in April 871 AD following the Saxon defeat at Basing.

Alfred was forced to sue for peace and pay off his enemy leaving the Viking host in control of a vast swathe of the eastern extents of  Wessex.

In 876 AD the period of peace came to an abrupt end with Viking attacks on Wareham in Dorset and Exeter in Devon and despite some luck and careful manoeuvring by Alfred that forced the Vikings to give up Exeter with the swearing of oaths and exchanging of hostages. The Danes soon showed their contempt for such diplomacy and following a period to regroup and replenish in Mercia swooped on Chippenham in January 878 AD when Alfred, who was there to celebrate Christmas, was forced to make a rapid escape, only just evading capture.


With most of his close followers killed in the Chippenham raid and some likely collusion between some in his court and the Viking host under King Guthrum, Alfred and his small band of followers made their way to the Somerset levels, arriving at Easter in the fenland refuge of Athelney (Island of the Princes).

This area of Somerset was, in the ninth century a swampy fenland only accessible by selected pathways that rose above the wetland and, with the loyal forces of Somerset and Devon to call upon, allowed Alfred to set up a new defensible line along the River Parrett from the burgh at Bridgwater covering the old Roman Fosse Way through Ilchester and Ilminster.

Of course following their successful  strike on Chippenham, Guthram and his army were faced with a bit of a problem in that the escape of Alfred posed a serious threat that needed dealing with while it was still comparatively weak, but that the newly conquered areas of Wessex would likely have to be left un-policed as the Viking army was forced to call in its garrisons in time to mass for an assault on the fenland strong-point.

It would seem that Guthrum at first pinned his hopes on turning Alfred's position by a landing on the north Devon coast by a force of about 4,000 men in thirty ships under the Viking leader Hubba, or Ubba depending on your account; sailing from what is now South Wales, shortly before Easter 878 AD but, after a successful landing that drove back the Devon fyrd under the ealdorman Odda into a nearby stronghold, the Saxons were able to rally and later sally forth cutting the Viking army to pieces and killing Ubba in the process.

With the turning attempt destroyed, Guthrum was forced to consider a more direct assault on the Somerset frontier and with his forces likely gathering on or close to the high ground of the Polden Hills in preparation for the most advantageous time to attack, namely when the tides induced low water and better access to the fens.


As the Vikings made their preparations, Alfred built up his stronghold at Athelney on the figure of eight island seen in the map above attached by a narrow causeway to the small burgh of Lyng, with the island surrounded by impassable waterways and reed-beds that helped keep the stronghold hidden from Viking patrols in to the area.

The little fortress became the centre of operations as the local Somerset and Devon fyrd conducted a fierce guerrilla war against the invaders, as they built their strength and rallied support from the parts of Wessex under enemy control.

The Time Team dig in 2002 showed evidence on the island of steel production from the slag refuse discovered indicating the likely provision of smithies turning out the necessary materials for the upcoming struggle.

For Alfred the key to victory was, as well as his preparations, to get his strike in before the Viking host was ready to conduct their own, and thus in early May of 878 AD he made his move by riding from Athelney to Egbert's Stone near Frome in Somerset where the fyrd were summoned to meet him.

The army of Wessex, once summoned, and the loyalties of those Alfred could trust confirmed, was ready to take the offensive, which culminated in the Battle of Edington sometime in early May 878 AD and saw, with the defeat of Guthrum and his army, Alfred reassert his throne and gain the breathing space to allow him to build the forces that would see the overthrow of the Dane held land to the north.

Our trip to Athelney provided an opportunity to get some much needed relief from the 'cabin feaver' that naturally occurs over this season of festivity as, like Alfred back in January 878 AD, one partakes of the company of close friends and family, mainly indoors and away from copious amounts of fresh air.

Of course any imbibing of fresh air at this time of year and the lower outdoor temperatures that tend to occur, are best experienced after a visit to a welcoming hostelry and the fortifying effects of a well earned hot lunch, and for anyone thinking of visiting, I can heartily recommend the aptly named King Alfred Inn at Burrowbridge where Carolyn, Tom Will and I enjoyed a really great lunch prior to our walk.

The pub is right next door to the Burrow Mump which is an interesting 'motte' built at the juncture of the River Tone and Parrett.

The man-made hill is topped by the ruins of an 18th century church and is now owned by the National Trust, kept as a monument to the men and women of Somerset killed in the two World Wars.

The structure has evidence of Roman presence but as can be seen from its dramatic appearance over the levels is very obviously Norman in appearance and not part of the ninth century landscape familiar to Alfred and his men. 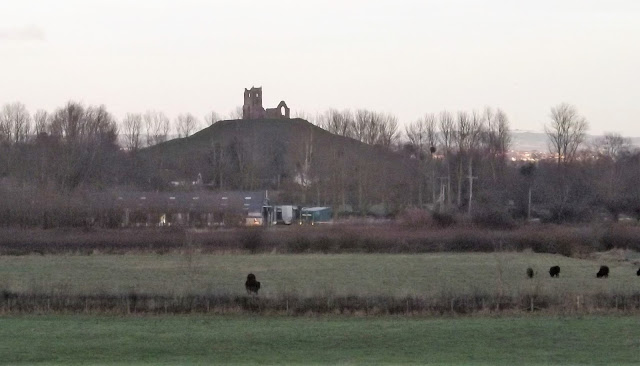 The Mump being right next door to the pub is a perfect way of walking off ones lunch and the climb to the top, although bracing with some icy winds blowing in from the north, provided fantastic views out over the levels to the Polden and Quantock Hills beyond and really enabled us to get a good idea of the landscape. 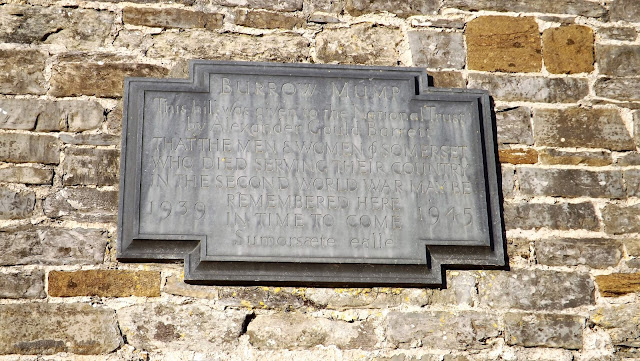 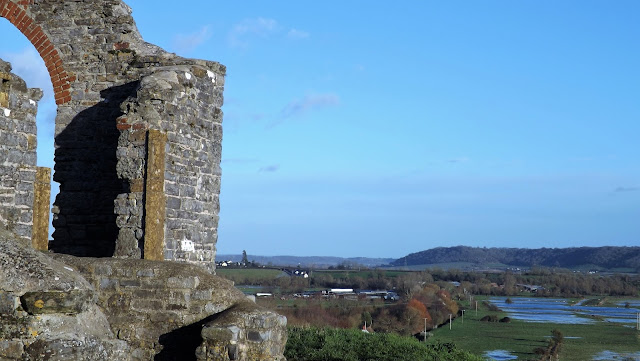 The two pictures above are looking east towards the Polden Hills beyond which would have likely marked the forward positions of the Viking line, with the low land flooded at this time of year indicating the extent of the fen-land in the ninth century.


The picture above is looking north towards the coast and the Saxon burgh of Bridgwater.


The picture above is looking to the south towards the lower curve of the Polden ridge with the Fosse Way beyond and the diverted course of the River Tone running across the picture, constructed in 1374 as the levels were gradually reclaimed. 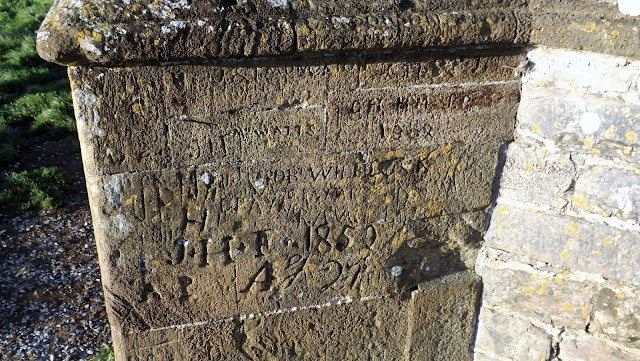 Graffiti and defacement of monuments and buildings has a long and ignoble history as evidenced by the visitors to the 1793 attempt to rebuild a church on top of the Mump following the destruction of an earlier building during the civil war and Monmouth rebellion.

The rebuild ran out of money and the new chuch was eventually built in Burrowbridge at the foot of the Mump in 1838. 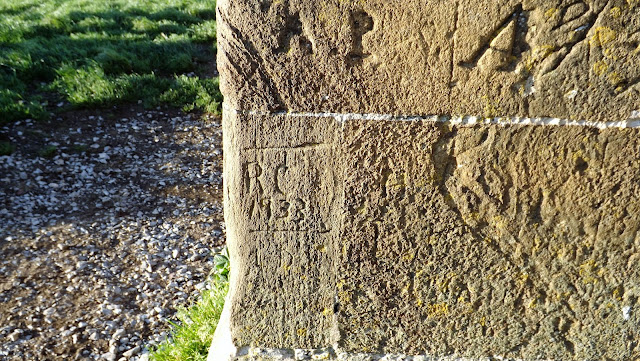 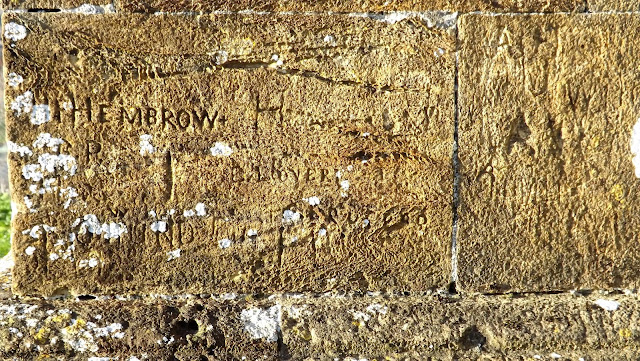 The A361 passes through Burrowbridge heading west past the King Alfred Inn on the way to Taunton and passes the monument to Alfred and the later monastery built on the site of his former church and fortress.

The monument was raised in 1801 and marks the position of the Saxon monastery later pulled down during the English reformation in the early 16th century. 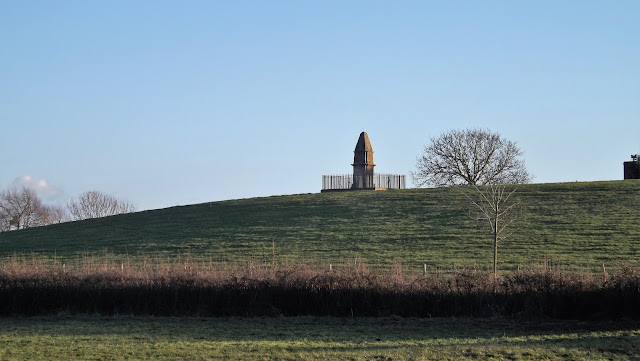 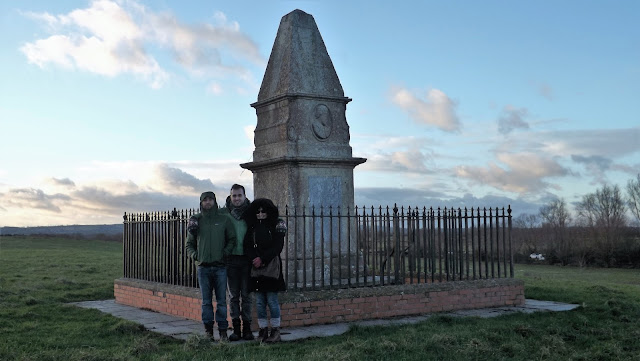 As you might guess from our photos besides the monument the day was getting decidedly colder as the light faded and one can only imagine what a miserable time it must have been for Alfred and his followers when they first arrived. 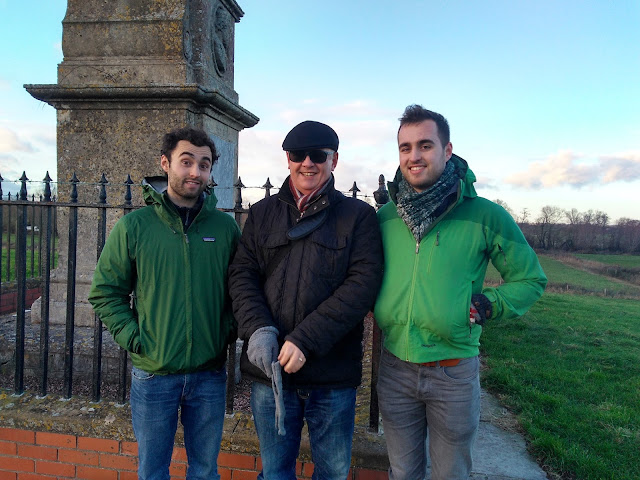 The picture below gives an impression of the extent of the fortified camp looking west towards the causeway and the burgh at Lyng, with Alfred's church constructed close to the view point and the fortified camp with a wooden wall atop an earth embankment covering the circuit ditch and the marshlands beyond.

Next up, fun and games in Mordor, well North Devon actually, a look-back at 2017 and plans for 2018 and hopefully some Vikings to kick of the new year with.
Posted by carojon at 04:50