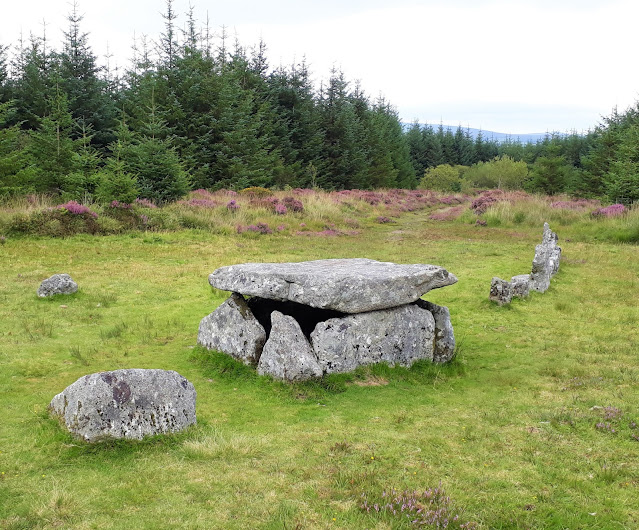 With Carolyn taking a week off from work in the Bank Holiday week of my birthday and Will home for a few more weeks before he starts working in Torbay in his final year at Medical School, I jumped at the opportunity for us all to get out onto Dartmoor and some further exploration of some of the amazing ancient sites that litter the National Park.
This time we were heading to Postbridge, favourite stop for holiday visitors to the region and the moor and giving its name to the ancient clapper bridge spanning the East Dart River.
https://en.wikipedia.org/wiki/Postbridge
https://ancientmonuments.uk/100782-clapper-bridge-postbridge-dartmoor-forest#.X1oD6XlKjIU
However  as amazing as the clapper bridge is, this time it simply marked the start of our seven mile walk across the moor heading first to another favourite haunt of locals and visitors, Bellever Woods further along the river and a spot we regularly took the boys to with other friends when they were younger.


With some food on board we were eager to get going as this was quite a walk we had planned with plenty of climbs over broken ground and hopefully plenty of ancient ruins in the landscape to spot as we progressed.


The tors on Dartmoor are amazing sites standing out on the hill tops with their bare rocky outcrops and make excellent reference points when monitoring progress along the route.
Not only that but the views across the moor can be stunning and reward the climb.
On reaching the slopes of Laughter Tor we discovered an amazing double stone row with several large standing stones nearby.
Our walk from the base of Laughter Tor took us down to the road near Dunnabridge Pound Farm and entailed a circuitous route skirting a large area of boggy ground, with Dartmoor bogs notorious and worth avoiding if possible, just read 'Sherlock Holmes and The Hound of the Baskervilles' if you doubt me.

Once around the bog we climbed to the top of Bellever Tor and the views towards Postbridge were stunning as seen in the picture below as we followed the path down before heading to the open ground to the left of the treeline in the valley below and climbing Lakehead Hill over which numerous neolithic remains were indicated on the map.

Sure enough the map proved spot on as we soon started to see numerous standing stones, remains of stone circle huts and stone rows indicating a lot of people must have been living in the area two to three thousand years previously. 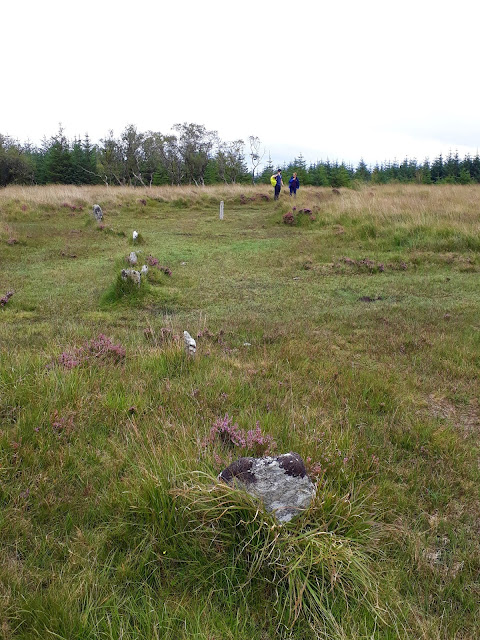 Then just as we were about to descend to the road where we had parked the car we were rewarded with the final highlight of the walk which was an amazing burial cist set amid its own stone circle and with a stone row leading to it.
It didn't appear that large, which made me think it might have been for a woman or a child, as similar sites have indicated.
Again, I never fail to be moved by the age of these monuments and thinking about the people that built them. 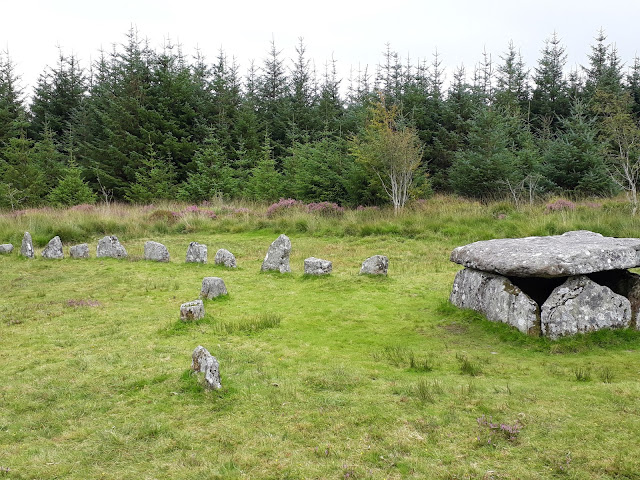 If you are interested in more information about this walk you can follow the links below and Carolyn and I hope to squeeze in some more before the weather makes moor walking a bit less desirable.
http://www.dartmoorwalks.org.uk/site/lakepics.php
http://www.dartmoorwalks.org.uk/walk/lakehead.php
Plenty of things to come on JJ's as I have another book to review, sloops and scratch built 64-gun ships and my third rates of renown are built and rigged. More anon
JJ
Posted by carojon at 10:37