All at Sea - The Mighty French First Rate, L'Orient, Part One 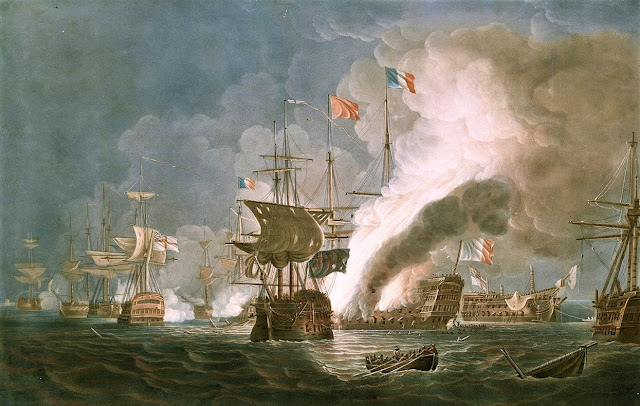 The French 118-gun Ocean class first-rate Dauphin Royal, renamed L'Orient in 1795 was designed by Jaques Noel Sane and was the third ship to launch in a class of ten such ships built during the French Revolutionary and Napoleonic Wars; grossing a displacement of over 5,000 tons, larger than the Santisima Trinidad and alongside the Temeraire 74-gun class and Tonnant 80-gun classes of third rate ships, the Ocean 120-gun class would complete the three standardised class of French line of battle warships during that period.
Their size and powerful armament made them the perfect choice as command flagships with plenty of accommodation for an Admiral and his staff and their cost to build meant that that was the role these large warships were reserved for.
Laid down in May 1790 at Toulon, she followed the first of the class, Commerce de Marseille, built and launched in the same yard in October of that year, with the new ship, Dauphin Royal, rolling down the slips on the 20th July 1791; and by September the following year now with the 'reign of terror' underway, having gained a new name, Sans Culotte.
Commissioned in August 1793, the Sans Culotte survived the Anglo-Spanish seizure and destruction of the French fleet in Toulon that same month, with her sister ship Commerce de Marseille being taken away by the Royal Navy. 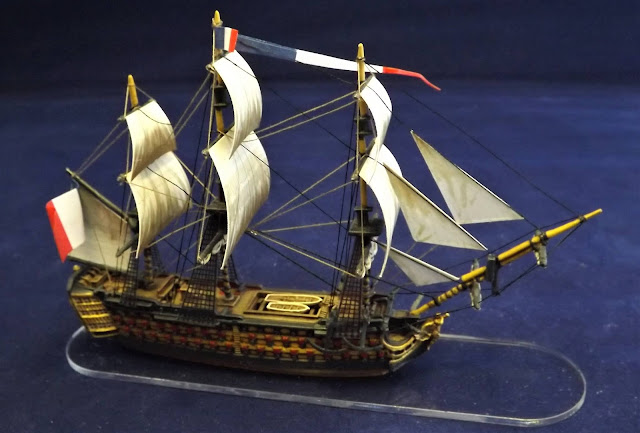 With the expulsion of the Allied fleet and French Royalists in December 1793, the surviving units were repaired and made ready throughout 1794 and by May 1795 the Sans Culotte was the flagship of Rear-Admiral Pierre Martin and led the thirteen ship Toulon squadron at the Battle of Genoa or Cape Noli on the 13th and 14th of March against the British Mediterranean squadron under Vice Admiral William Hotham.
The action was indecisive and saw the brunt of the battle centre around a certain Captain Horatio Nelson in HMS Agamemnon 64-guns, as she set about the Ca Ira 80-guns, forming the rear-guard of the French line as the British began a chase when Admiral Martin attempted to break contact.
The Sans Culotte fell back in an attempt to relieve the hard pressed rear most French ships but Ca Ira and Censeur 74-guns would be taken in the British pursuit that would see the Sans Culotte lose contact with the main French fleet after Martin had transferred his flag to a frigate to better control his squadron.
The Sans Culotte would later anchor at Genoa before re-joining her squadron, and though obviously involved in the exchanges with the British van, her casualties and damage are unknown, additionally Admiral Martin would lay charges against Sans Culotte's commander, Captain Lapalisse, for failing to follow his orders but these were subsequently dismissed by a jury. 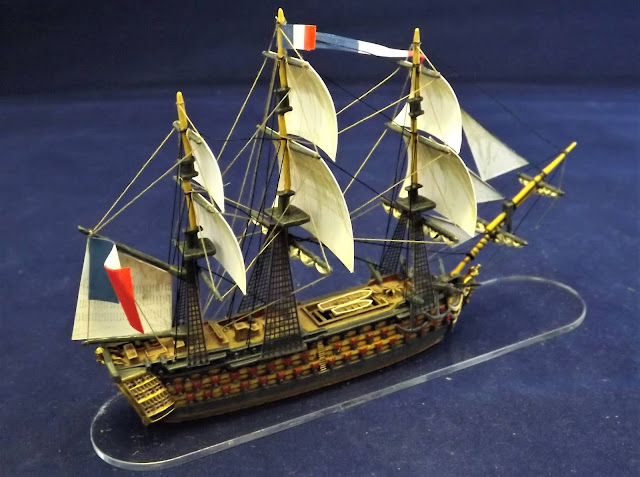 In July 1795, Maximilien Robespierre's reign of terror was brought to a bloody end on the guillotene as he and his supporters were ousted in a coup initiating the rule of the French Directory, effectively lead by Paul Barras who had led the coup against Robespierre, before the former had sent him to the guillotine.
With France under new management, another round of ship renaming would see the Sans Culotte change its name to the more familiar L'Orient in May 1795. 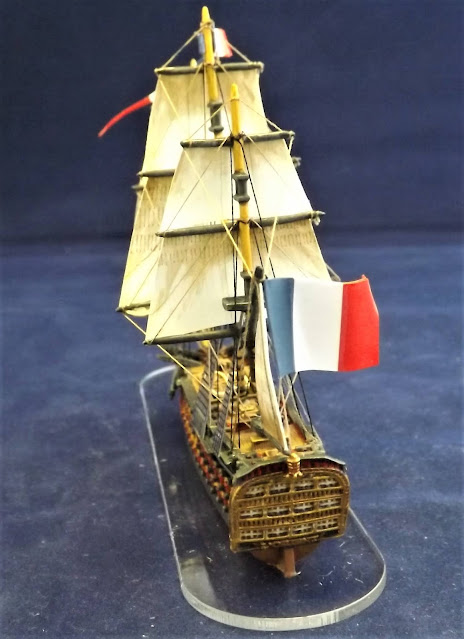 In July 1795 Admirals Martin, in his renamed flagship L'Orient and Hotham would renew their contest in the Western Mediterranean as both sides now reinforced and with Martin having to put down a mutiny in Toulon among his ships crews, the French set sail in early July, only to find themselves intercepted by Hotham's flying squadron off Cap Corse lead, of course, by Captain Nelson.
With Hotham in pursuit, the French withdrew to a safe anchorage of the Iles d 'Hyeres, but on the 13th July some of Martin’s straggling ships were caught up with, resulting in the loss of the Alcide 74-guns which blew up after the exchanges of gunfire, but despite being in a position to press his attack Hotham declined, much to the frustration of several of his ships captains, including Nelson.
The Battle of Iles d 'Hyeres was the last action fought between the two sides before Spanish alliance with the French forced the British squadron to evacuate its forces from the Mediterranean in 1796 and the two navies would not come into contact in the theatre until the Battle of the Nile in 1798 when the British returned to the Mediterranean. 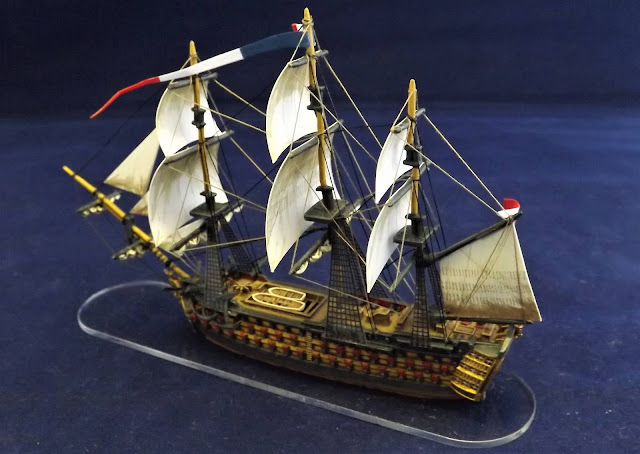 The year 1797 saw a complete turn around in British fortune at sea with victories over the Spanish at the Battle of Cape St Vincent on the 14th February and the Dutch at Camperdown on the 11th October, that rearranged the balance of naval power and set the environment for a British return to the Mediterranean the following year.
The timing of events couldn't have been more fortuitous as when Nelson, now Rear-Admiral of the Blue and commanding the 74-gun HMS Vanguard, left St Helens off the Isle of Wight on the 8th April 1798, escorting eleven merchantmen with naval stores for Earl St Vincent's Mediterranean fleet at Lisbon, he was himself the vanguard of naval reinforcements (two more ships of the line and three smaller vessels) for St Vincent to support the planned return.
This as Vice-Admiral Francois Paul Brueys d'Aigalliers was appointed commander in chief of the Toulon fleet, raising his flag aboard the L'Orient on the 13th April, to be joined on the 8th May by General Bonaparte at the head of 36,000 French troops, that were to be escorted by Brueys fleet; with Nelson having been ordered to sail with a squadron of British ships on the 2nd May to investigate the reported build up of French ships and troops at Toulon. 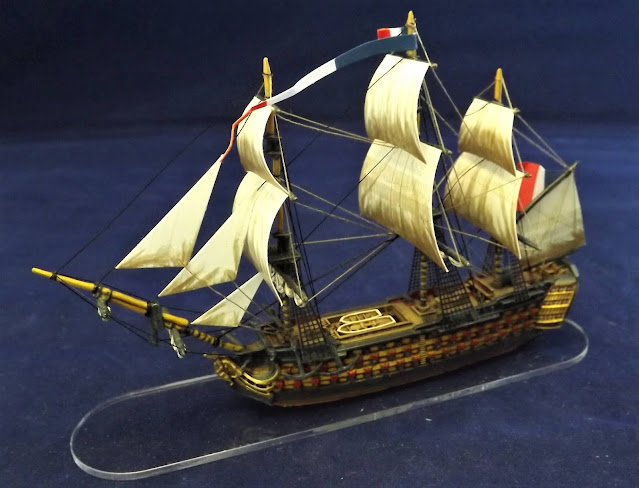 What followed was an intriguing cat and mouse chase across the Mediterranean as Nelson, without frigates to aid his search, followed reports, and his intuition most of the time, from late May, early June to track down the French fleet as it made its way first to Malta, which fell to Bonaparte's troops on June 12th as Nelson searched in vain of Cape Corse, Corsica.
With a 3,000 man French garrison left on the island, the French set course for Egypt and Alexandria on the 18th June, Nelson having discovered from Sir William Hamilton in Naples that he suspected the French had gone to Malta, which he later confirmed on the 22nd and that the French force had left in the direction of Egypt which he now suspected was their next destination. 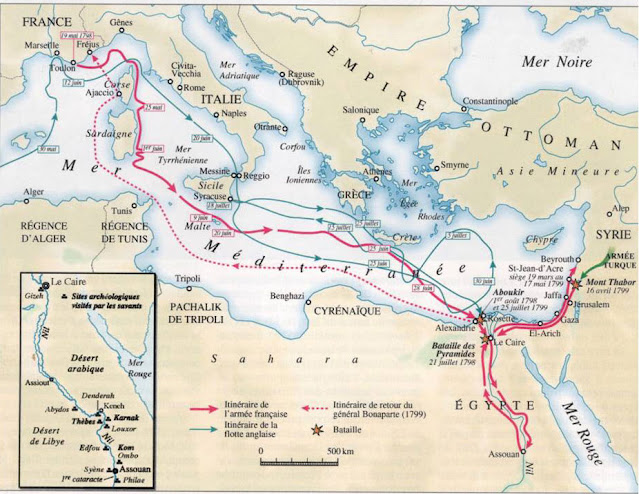 The French progress was rather stately as unlike Nelson, Brueys was escorting several hundred troop transports and supply ships, which meant that Nelson overtook his quarry, arriving off Alexandria on the 28th June, and finding no sign of the enemy, leaving on the 30th June, missing the arrival of the French by twenty-four hours. 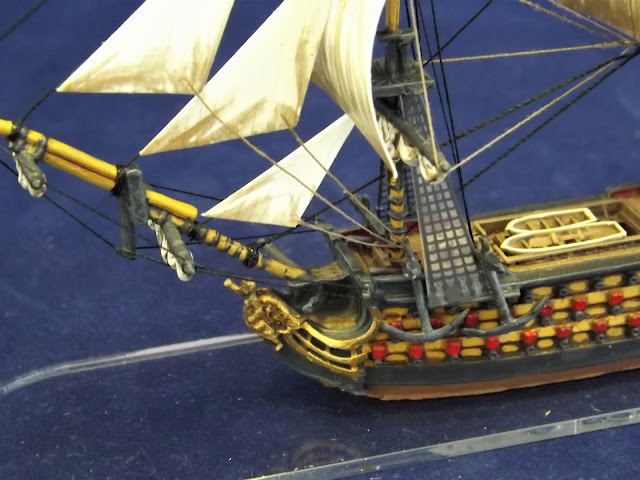 Thus Nelson set off to investigate the eastern Mediterranean, before heading back to Sicily, arriving off Syracuse on the 19th July and, with no word from Hamilton that the French had passed back west, and with Nelson venting his frustration at his lack of news when he wrote;
'The Devil's children have the Devil's luck. I cannot find or to this moment learn, beyond vague conjecture, where the French fleet are gone to. All my ill fortune, hitherto, has proceeded from want of frigates,'
Undaunted and determined to find his quarry, Nelson headed back into the eastern Mediterranean yet again, via Crete, Cyprus and Syria if need be in search of news of the French fleet.
News finally reached Nelson on the 28th July on the Greek Peloponnese, from the Turkish governor at Koroni that the French were in Egypt and the British squadron immediately made full sail for the African coast.
In part two of this post I'll take a look at the Battle of the Nile fought on the 1st August 1798 in Aboukir Bay, when I will review my second model of L'Orient, this time at anchor, as she was on the day and night of the famous battle. 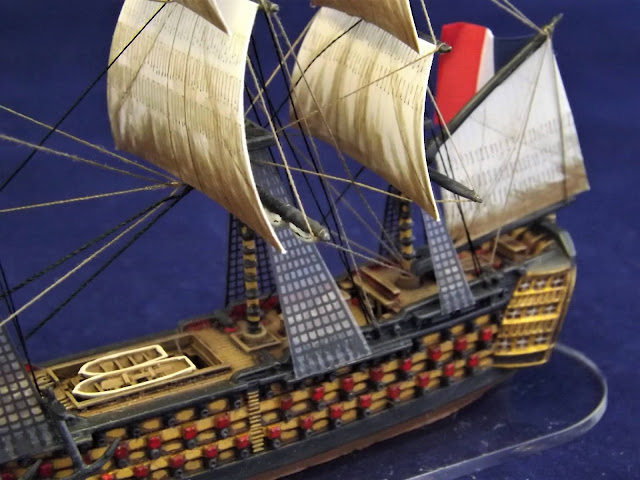 Needless to say my first interpretation shows L'Orient under full sail flying the pennant of Admiral Brueys from her mainmast and suitably arranged to allow for her presence in any of the actions mentioned from the Battle of Cape Noli in 1795 to her final campaign in 1798.
Additionally Nelson came very close to intercepting Brueys on the foggy night of the 23rd-24th June when the French reportedly heard British signal guns across the three mile gap between the opposing fleets and so a full sail L'Orient would make an ideal addition to my French fleet to fight a classic 'What if' action as Nelson spots the French escort and its large convoy the next day. 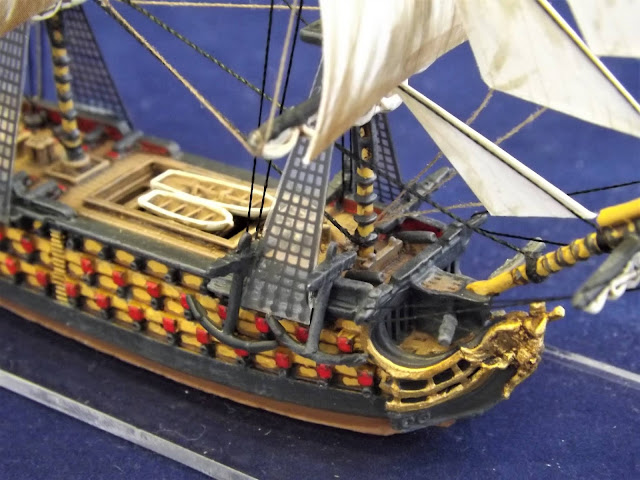