The release of Maurice has seen this rule set join my list of all time greats. I have never had a boring or predictable game using them, and the design, incorporating its own card driven sequence captures, in my mind the "feel" of warfare in the age of reason.

They have quickly become my turn to set when I feel the urge to play one of my favourite eras, the American War of Independence (AWI) or as our cousins across the pond would refer to it, the American Revolution. 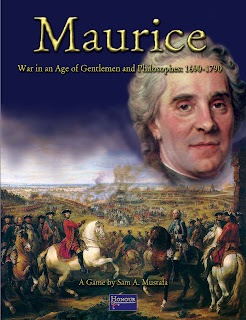 The American War of Independence has been described as Britain's Vietnam, and the Avalon Hill game "We the People" (WTP) seems to capture that aspect of the war very well. It knits together the political struggle of winning hearts and minds with the military struggle, as both sides attempted to destroy each others forces to keep control of areas they had mastered. The political events outside the colonies are also included by having those events affect the course of the war with eventual French intervention.

Again the inclusion of a card driven sequence of play means that I have never seen the game play the same twice, and it makes it a very re playable game. 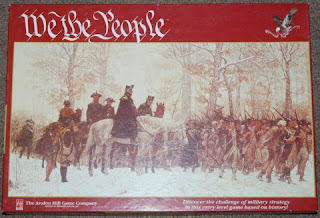 A couple of years back I picked up a copy of the Jan/Feb Battlegames magazine that had mention of running campaigns for the AWI using Commercial Board Games, namely 1776 from Avalon Hill, Liberty from Columbia Games and my favourite We the People.

I read the article at the time and filed it under "Things to do before I die", because I was building my WWII Normandy collection and didn't need to get sidetracked. However having practically finished the Normandy collection, and now working on the Napoleonics, I started to make notes on the article.

Very simply the article talks about the feasibility of using each game system to generate battles in a historical context and relate the tabletop wargame results back to the board game. There is a neat little rule of 12 that uses a 3:2 ratio for translating forces on to the table with some suggested army lists to construct those armies on the ratio selected.

So in WTP when two forces engage in a battle the weaker side would get 12 units built around the army lists. The stronger side would get any number of units from 13-18 depending on its strength advantage. Then other considerations can add further units to each force, who has State Militia, British National Advantage, Von Steuben doing his magic etc. Both armies will eventually have between 13 to 20 units. You can change these numbers if you wish as long as you stick to the ratio. So for instance you could go 16:24, 18:27 etc according to your whim.

There is a terrain design system based on where the battle is happening, to help put together your tabletop, and away you go. Then at the conclusion of the battle you apply losses to your map force based on the level of victory.

The 12:18 units fits nicely into the Maurice system which designed around those numbers has the advantage of being played to a conclusion in a reasonable amount of time, certainly to be built into the commitment of playing a campaign. This together with the fact that there are relatively few battles in WTP, on average less than ten in a game, makes both games a reasonable possibility. 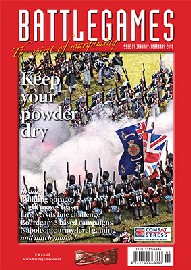 So I thought a play test would be a good idea to see if my theory had "legs".

My old pal and neighbour Steve, who has shared some enjoyable WTP and Maurice games together, came over on Thursday evening, and I set up a table with two AWI forces constructed on a 3:2 ratio using the Maurice points system, rather than units, and the army lists provided in the article. The picture below gives an idea of the forces and set up before additions and changes, with the Americans on the left.


By dicing for the potential variables a WTP game could throw up, I arrived at the two forces; 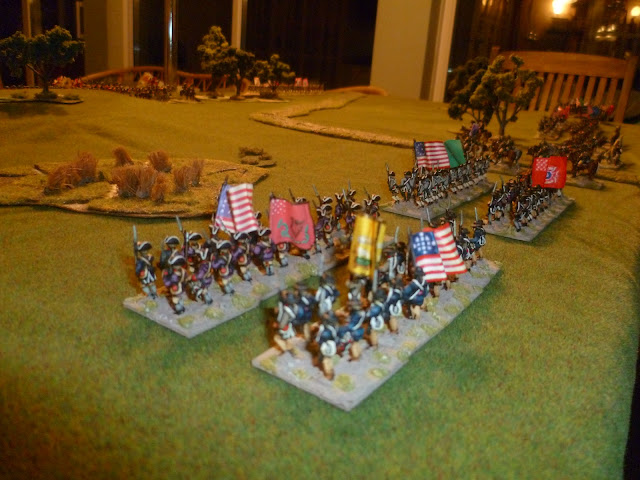 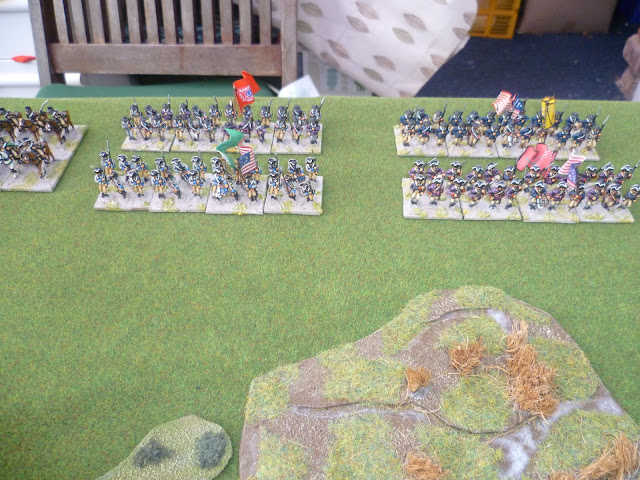 With the game occurring in a coastal zone we diced for the predominant terrain type which came out as hilly and gave the Americans the scouting advantage with their three Irregular Militia to none for the British. Steve playing the "Rebels" decided to defend.

The Battle of Lovelace Hill 1777
So with both sides organised the Americans gathered their best units around the British objective on "Lovelace Hill" and prepared to sell their lives dearly. With colours flying and pipes and drums playing the British line prepared to advance.

The first rounds of the battle saw both sides prepare each others lines with an artillery bombardment, The Royal Artillery battery causing a lot of discomfort to the Militia.
As the Crown forces closed on the American line, General Mathews gave an empowering speech to his troops with the battle cry "Remember Bunker Hill" that immediately added two points to American morale.

The first exchanges of musketry occurred in front of the hill as the British attempted to dress the ranks in preparation for the decision with bayonets. The British Guards moved through the woods displaying their skill at arms, not stopping or needing to reform in the disruptive terrain. The Hessian's close behind wheeled slightly to allow them to approach on the open ground. All the while the lone American gun played on their ranks with round shot. 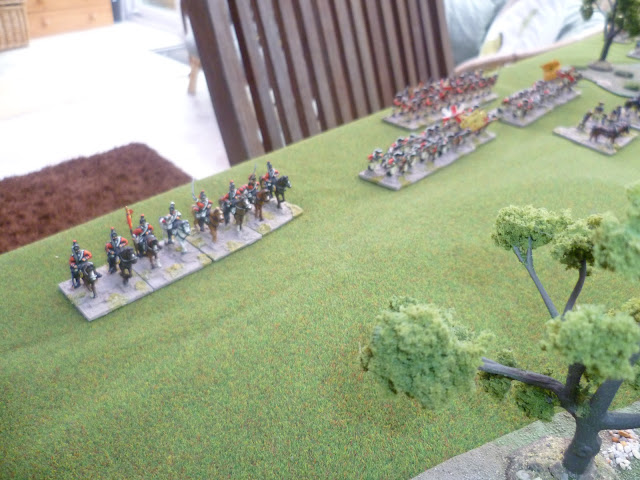 As the first assault went in on the hill, the British right closed on the American left and the musketry became widespread. It was here that British fire drill started to have effect and American units struggled to maintain their formation under the hail of shot. However the Guards were having an "off day" managing to combine indifferent musketry with a failed assault forcing then to fall back through the Hessian's, disrupting them as they went.

As if this was not bad enough a cry of dismay arose from the British left as Colonel McLeod of the 44th Foot was seen to fall after the last volley from the Americans. He was a leader who lead from the front and his loss was keenly felt causing British morale to drop by two points.

As the fighting became "up close and personal" both commanders threw in their best cards to gain the ascendancy, units started to disperse, however these losses after the death of their leader seemed to affect the British more than the Americans, and by mid day British morale was teetering on 3 points vs Americans on 5 points.

Extreme times call for extreme actions, the British launched one final assault on the American lines in an attempt to break their morale first. Three battalions of militia who attempted to stifle the attack were quickly dispersed, they were soon followed by two battalions of Continentals. But the fight had taken its toll on the British who having lost their Hessian allies earlier suffered the loss of the 44th in the centre. The sight of these veterans falling back was too much for the British and they were forced to concede the field.


Our game ended in a decisive American victory. Well played by Steve, fending off my furious assaults with some deft card play and canny troop placement.

We both thoroughly enjoyed the game and the rules. The card play makes this an great game to play.

Translating this back to WTP. The British force would have to retreat, if unable it would surrender.
Loser casualties are determined by WTP with a d6 roll, with 1-3 causing 1 strength point lost and 4-6 2 strength points. Given this was a decisive American victory any losses would be increased by 2 strength points. The Americans, as the victors, would lose 1 strength point. The maximum size of an army can only be 5 strength points, so this could have been a particularly disastrous battle for the British in a campaign setting. Obviously if this was a campaign game, the British would have probably switched to the defence as the game came to conclusion thus only offering the Americans a marginal victory and minimising their campaign losses. These are the effects that a campaign can bring to the table that one off games often fail to model.

If you are interested in these ideas then check out the Battlegames edition Jan/Feb 2010 for more information
Battlegames back issues
Posted by carojon at 02:44

Email ThisBlogThis!Share to TwitterShare to FacebookShare to Pinterest
Labels: American War of Independence, Campaigns, JJ's Wargames, Maurice, We the People