Yesterday was spent having fun and laughs at my local club the Devon Wargames Group in Exeter.
Devon Wargames Group blog
I have put up a description of our game on the blog.
I had a lot of fun getting my Langton collection of Age of Sail naval ships out to refight the Battle of Sadras 1782. My collection of ships is built around the fleets of Hughes and Suffren as I find the history of these two well matched adversaries more compelling than the many one sided affairs of the later Napoleonic period.
Langton Miniatures
Over the years I have tried several rule sets starting with "Action under Sail" by S Birnie that we played all the time in the late 70's and early 80's. In the 90's I moved over to the computer using "Clear for Action" by Malcolm Smalley, which I have recently resurrected to play on my laptop with DOSBOX. These are great for smaller actions with an excellent level of detail.
More recently I had moved to Too Fat Lardies and Kiss Me Hardy (KMH), really enjoying the freedom from order writing that card driven games bring togther with the unexpected.

This App offered the possibility of combining the fun aspects of card play with the game management of the computer. Having just recently acquired an Ipad for Xmas I was keen to try the rules out.

The pdf rules and scenarios are simple and straightforward and give an easy to follow structure for your game using the App to randomise movement, weather and wind, and combat. Entering ship data is simple and the game can be put down and come back to easily.
In addition, if like some, you prefer to roll your own dice, you can and by inputting the results on the App can use them to influence the system.

I immediately saw that the simple card play system that the rules come supplied with which are used to decide when each side can command their ships and conduct combat are easily adapted to more complex options that KMH has to offer, and yesterday I added in the Command Rules that KMH can use, which played very well.

We played the system for the first time yesterday with a good number of ships on each side and we quickly were running through the card play using the App. The system was flexible enough to allow us to adapt rule changes as we went along and the game was a lot of fun.

The ships come pre-loaded on the system offering options from 1st rate 130 gun vessels to unrated 10 gun cutters. The crew numbers are set at specific round numbers ie 50 to 1100 men. There are five crew ratings from Poor, Average, Good, Veterans and Elite. Once you have created a ship you can simply reproduce it in your "dry dock" giving each version its own name and for my game an identifying number.

When you want to create your game fleets you simply choose the ships required from your dry dock and place them in the fleet selected. This means that your creation is kept as built whist the copy is used by the game during your battle and will record casualties and damage. 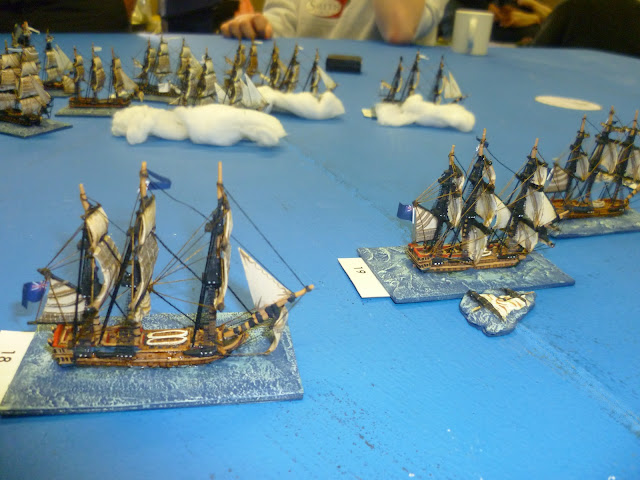 Movement is governed by the system. You set the wind speed and direction. The system will remind you when this should be checked for changes. Each ship can set several (six or seven) sail settings from Let Fly to Full Sail which combined with the ships attitude to the wind and the score of three dice ends up giving you the option to move your model at the speed in cms of the single highest dice score or the sum of all three, with a bonus added to each according to the proceeding factors. This randomises movement enough to roughly predict what your ship will do under a particular sail set but still make it a challenge to sail several ships in company with each other. There are additional rules to customise your ships as poor or fast sailors by adding six cm to the score or only using two dice as the modifier. There is a suggested turning regimen of two points turned per move, however we simply used the KMH turning circles printed in cm moves with different radii for ship class.

All the gunnery options are included for pistol and musketry, ball, double shot, triple shot and chain, with suggested range restrictions as appropriate.

Damage is recorded by the system in percentage terms, thus your rigging, crew and hull start at 100% with damage degrading that figure as you play. The system automatically alerts you to any critical hits like shot up rudders, masts falling, captains killed or wounded, fires etc (the usual stuff!) Repairs are simply resolved by rolling a dice with a 4,5or 6 usually being required. The game master then updates the ship record manually to record the repair. Boarding requires your models to be locked together. You let the system know which side is attempting to board and depending which attempt this is, ie first second or third will determine what dice score on three d6 is required to succeed. The number of attempts being equal to the number of decks on the target vessel. When all decks are taken the target is deemed as captured. The score required often increases as the fight is carried below decks. If you make a mistake you can go into the ship record and correct any misplaced damage results, which is really good, as we all know mistakes can happen.

If I were to suggest improvements it would be to allow more options around the ship stats when creating the fleets, ie the crew numbers are fixed and standard to the nearest 100 men. Being able to vary those numbers together with adding in specific numbers of specialists like marines would be a good addition.

As a gamer for 40 years I think it's a brave person who predicts the future in wargaming. However with the advent of tablet computers and Apps that allow data to be easily computed and recorded through the game allowing the players to concentrate on the important stuff of commanding their toys, I would be surprised not to see more of these kind of aids appearing in our hobby in future.

These rules are great option for a large fleet action, and as a freebie, I think they are well worth a look. In addition complexity and detail are easily added in by the game master as required and I am going to try out some single ship actions with more cards added to control options as per the KMH suggestions.
Posted by carojon at 03:40