Last December I posted how pleased I was with my newly acquired Tamiya paint brush after a long fruitless search for something reliable and long lasting. It already had had five weeks of use at that time.

I guess I should state up front that I do not hold shares in Tamiya, although based on my feelings for this lovely piece of kit I'm seriously thinking about getting some. 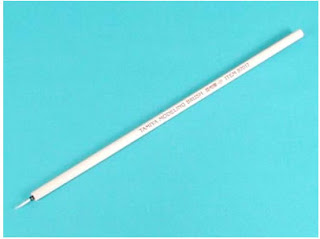 The reason why I've posted this now is I was chatting to a friend about painting and stuff to get at Salute, as you do, when I found myself telling him that if he bought nothing else this month he could do a lot worse than getting one of these brushes.
So why is it so good? Well bear in mind that I have been painting little toy soldiers for forty years and I've got through a few brushes in my time. I think on average, with using the brush pretty much every day, my brushes lasted, i.e. kept their point, for about three months. I may have been able to increase that slightly by washing them out occasionally in Tamiya paint thinners, that helps get out those microscopic particles of acrylic paint.
Ok, so I've now been using the same brush for over five months, working on all the figures I have blogged about in that time which include at least 6 x 24 man battalions of British and French infantry,  12 x Portuguese cavalry, three batteries of artillery, crews guns and limbers and casualty figures plus a few General officers. I think I can also include about forty 28mm Wars of the Roses figures used in our Xmas club game.
The "point" is my brush still has one and shows no sign of fraying. In addition I bought two new ones as a back up so at this rate probably won't need a detail brush for the next two to three years.
Anyway, if you are thinking about getting a new brush soon, you might want to consider this one.﻿
Posted by carojon at 09:06