"The first radio contact between the Americans and a patrol of the Guards Armoured Division is made at 11.15hrs and they make physical contact in Woensel at about 12.15hrs.
In the late afternoon the army arrives in the southern outskirts of Eindhoven"

"The vanguard of the Guards Armoured Division entered Eindhoven at midday; the main force did not arrive until late afternoon. It was in Eindhoven that the advance was inadvertently hindered by the local Dutch people, who blocked all the streets as they celebrated their liberation".

I have on my mantelpiece an original, of what has become quite a well known, picture of an OP tank operated by the Guards Armoured Division during Operation Market Garden. The picture with another of the same vehicle driving off through Eindhoven are held in the archive of the Imperial War Museum, here in the UK. It has an official caption detailing the unit and where the picture was taken.

However there is a further story behind this picture that the Imperial War Museum don't have recorded together with the name of the Sergeant (his tapes are just visible on the bent right arm) pictured in the drivers hatch. That man is my Dad.

In 1943 my Dad, Herbert (Herby) Jones, volunteered  for service in the Army and was recruited into the Royal Artillery, joining the 55th Field Regiment, West Somerset Yeomanry, part of the newly formed Guards Armoured Division.

He joined the crew of an Observation Post (OP) tank and started his training in old Valentine Infantry tanks learning the vital role as an observer for the field guns he would be directing in action . I was able to see a Valentine in running mode at an open day at Bovington Tank museum. When I explained my interest to the driver, I got a close up inspection of the interior. The tank was primitive, with cables running through and below the turret step and the minimal of crew comforts. No wonder Dad was so happy when they were issued their new Sherman Vs. He always said that the Sherman would never break down and was totally reliable and that they were more manoeuvrable and faster than their German opponents.

In June 1944, two weeks after D-Day, Dad was part of a forward party that prepared for the landing of the whole of Guards Armoured Division in July and their subsequent baptism of fire during Operations Goodwood and Bluecoat.

I was able to speak to a former subaltern, Dr Tony Bailey, who had commanded a troop of four (Sexton) Self Propelled guns with the 155th Field Regiment, Liecestershire Yeomanry, the sister regiment in Guards Armoured. When I showed him the picture of Dad in Eindhoven, he shook his head knowingly and said what a brave bunch of chaps the OPs were. His regiment lost six OPs in Normandy. He went on to say that one minute you would be scribbling down co-ordinates, and the next it would be just a hissing static as the radio went dead.

Dad, like many of his generation, didn't talk a lot about the war. They were a generation for whom it was considered "bad form" to spend time talking about ones exploits. My childhood memories were of family holidays to the continent, and I remember snippets of Dad's remarks as we drove over the open fields above the old Colombelle steel works near Caen. He remarked about what a bad time they had had in those open fields, with me not really understanding then what I know now.

We were looking at the killing fields of Normandy and the charge of the armoured divisions during Goodwood. The casualties were much less than the Epsom offensive a few weeks before, but the "tankies" paid a high price for the ground they gained in those July days in 1944.

Another memory is of standing with my younger sister and having Dad point to a railway road crossing and explaining that they had had a big battle with a very large German tank on that very crossing. I researched that battle with the help of the Guards Armoured official history and knowing the area was close to Leopoldsburg read about the fierce fighting that occurred there and that Dad's CO and boss on the tank was killed there in that fighting about a week before the photo in Eindhoven was taken.

Captain Wilfred Good was loved by all his men and Dad took his loss greatly, which might explain the very serious looking young man in the picture. I discovered his grave on the Commonwealth War Graves site and remembered that Dad said he was like a father figure to the crew and was greatly missed.

From the fierce fighting in Normandy the Guards were in the vanguard of the "Great Swan" as the pursuit of the German Army into Belgium became known to British troops. The Germans were chased up to and out of Brussels. The advance was rapid and in great contrast to France where the smaller gains of territory was slow and often at great cost. The veterans of Guards Armoured always remark about the welcome they received from the Belgian people and the city of Brussels in particular. Dad stayed with a family there and I remember going to visit them briefly in the 70s.

The tank Dad is pictured on is an OP version of the Sherman V and is armed with nothing more than two fixed machine guns. That fearsome looking 75mm main gun is in fact a section of telegraph pole. I found these pictures, somewhat revealing, of a similar vehicle, used by 7th Armoured Division, knocked out in Villers Bocage during Micheal Wittman's famous attack. The fake gun can be seen lying in front of the vehicle next to the blown off gun mantlet. The blackened hole to the left of the gun aperture testimony to what an 88mm AP round from a Tiger could do to these tanks.

The picture in Eindhoven brings the story up to the 18th of September 1944, and was only identified when, in the early 80's, I happened to show Dad the Osprey book the picture was in, highlighting the fact that it was of Dad's unit. Imagine his and my amazement when he exclaimed, "that's our tank!" I suddenly realised who was staring out at me from the pages of history.

When the film "A Bridge too Far" came out Dad was able to see the part his unit played in a very famous campaign recreated on the big screen. He seemed quite impressed with the level of detail, particularly in the recreation of the initial attack up "that road". The most memorable part of that film for me is when Micheal Caine, playing Lieutenant Colonel J.O.E. Vandeleur orders the advance to begin and, as I think of them, the towed 25lbrs of the 55th Field Regiment commence the creeping barrage that led off the attack.


Thankfully Dad survived the physical and mental hazards of war and married mum in 1948, she too having an interesting wartime experience after volunteering for service in the W.A.A.F. Her experiences are covered in a posting to the BBC WW2 People's War site.
http://www.bbc.co.uk/history/ww2peopleswar/stories/70/a2864270.shtml

After a successful career in sales he later retired to Devon, passing away in 2003.

Needless to say, when I field my Guards Armoured Battle-group and an OP is required the OP Tank with the Captain and Sergeant reconnoitring ahead  should now need no introduction. However I made this model a few years ago, and I now see I need to add the obligatory muzzle cover!
﻿ 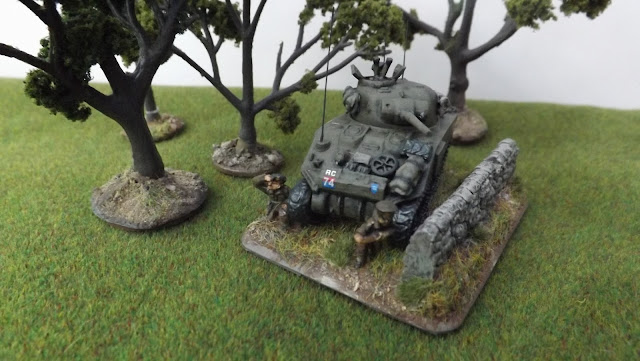 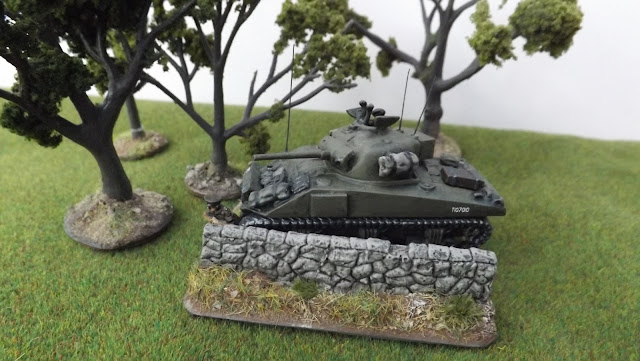 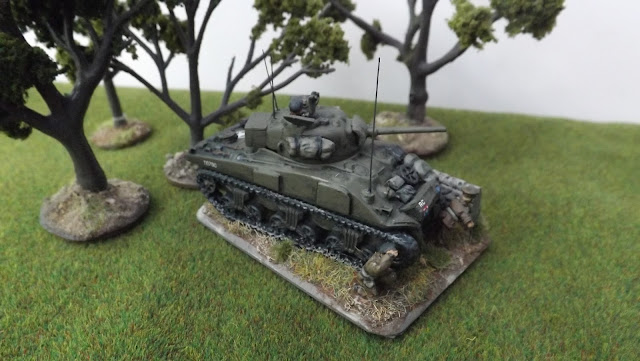 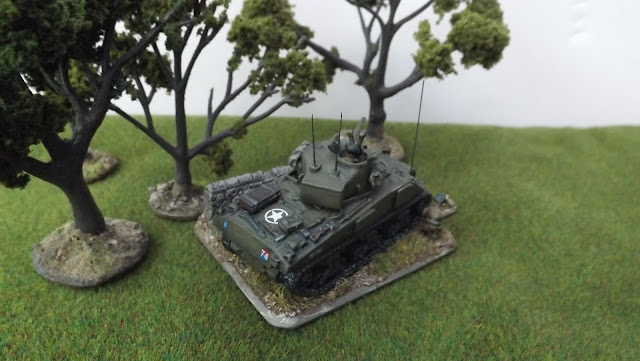 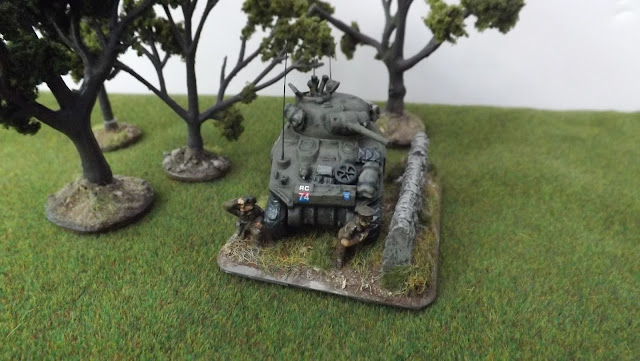