Yesterday was a very busy day with a 7 am start to catch the train into the Gare de Lyon in Paris, a forty minute journey which involved a few visits to YouTube to master the intricacies of using the French rail and metro systems. The day was balmy and hot and starting off at the Sacre Coeur basilica in Montmartre we walked down into the city enjoying a picnic lunch in the Tuileries Garden.
Tuileries Garden

It was then on to, what for me has become a bit of a pilgrimage when in Paris, namely a visit to Les Invalides. I first visited this famous institution when I was just 16, some would say just after Napoleon was interred. This would be my third visit and I think I get something new each time I go. If you are slightly interested in military history, the French forces and or Napoleonic history in particular then you have got to go. I have attached a link to tell you a bit more about the history and the contents of the museum.
Les Invalides 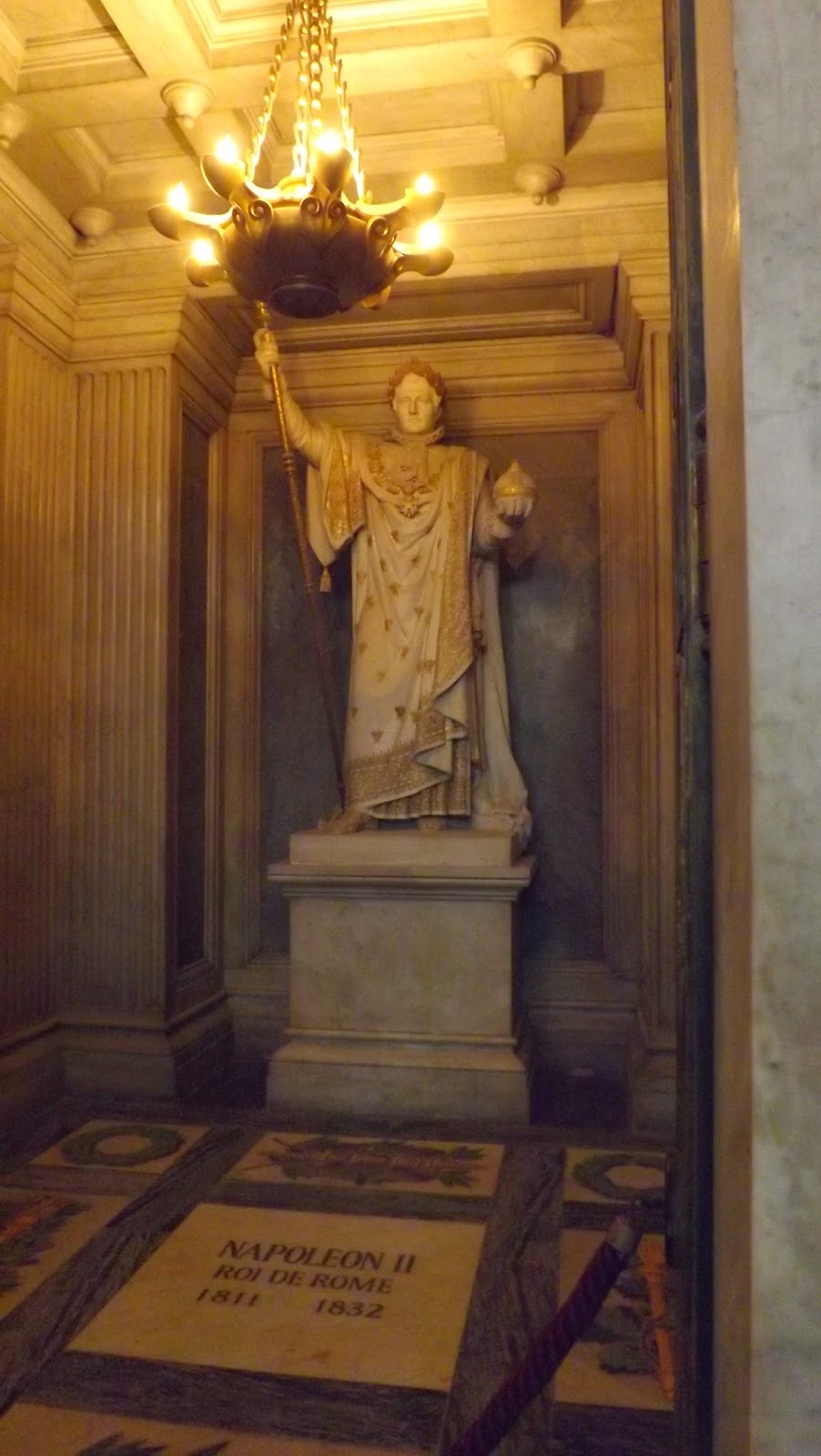 The first part of our visit was to pay our respects to the great man, who alongside Alexander the Great, truly ranks as one of the Great Captains of history and still intrigues people the world over even after over two hundred years. 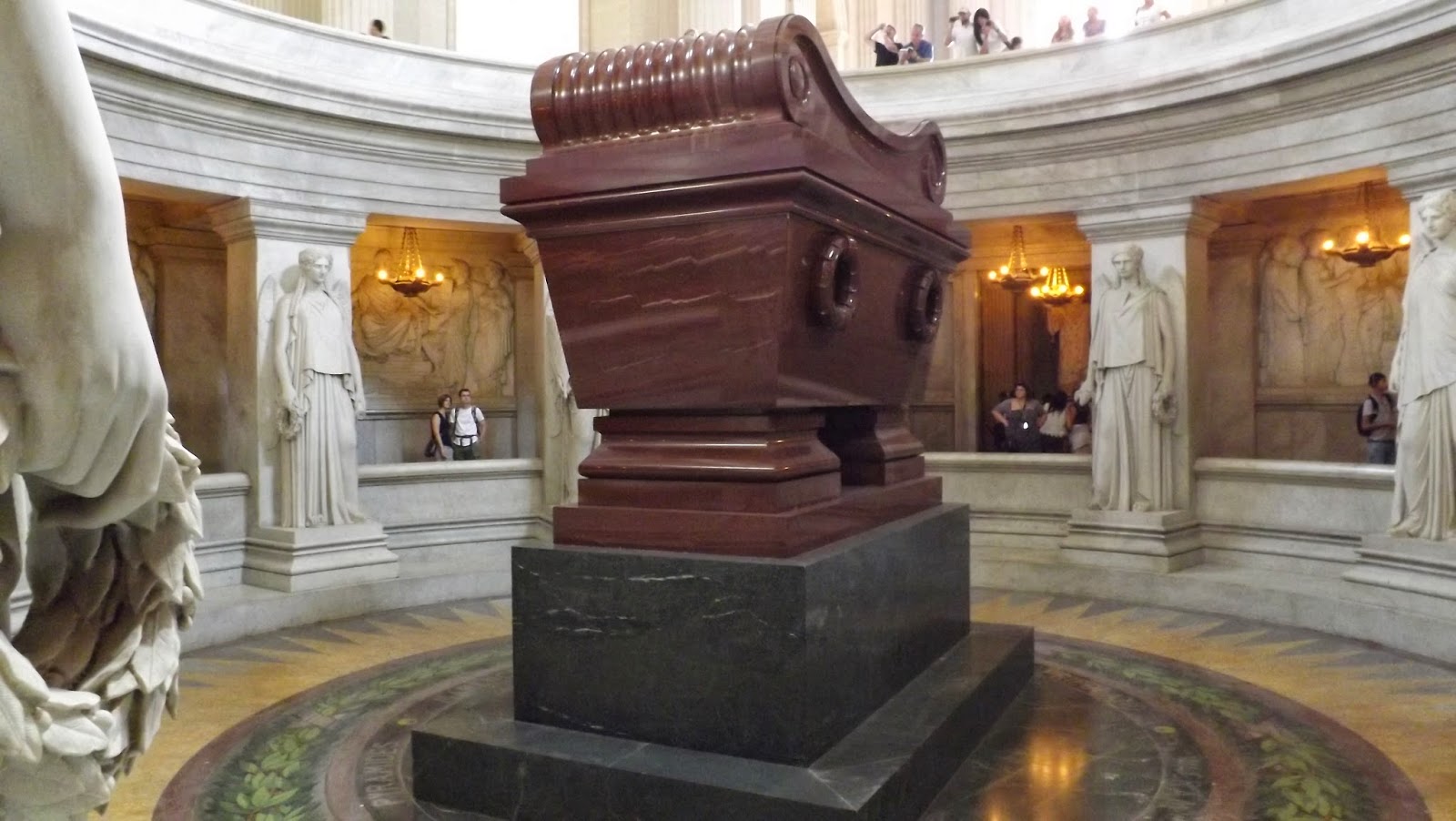 The chapel behind the tomb houses an amazing collection of captured trophies, but was not open to the public, so I managed to get a couple of pictures of these captured Austrian Colours in the windows above the main entrance. The years have taken their toll but the details are still visible. 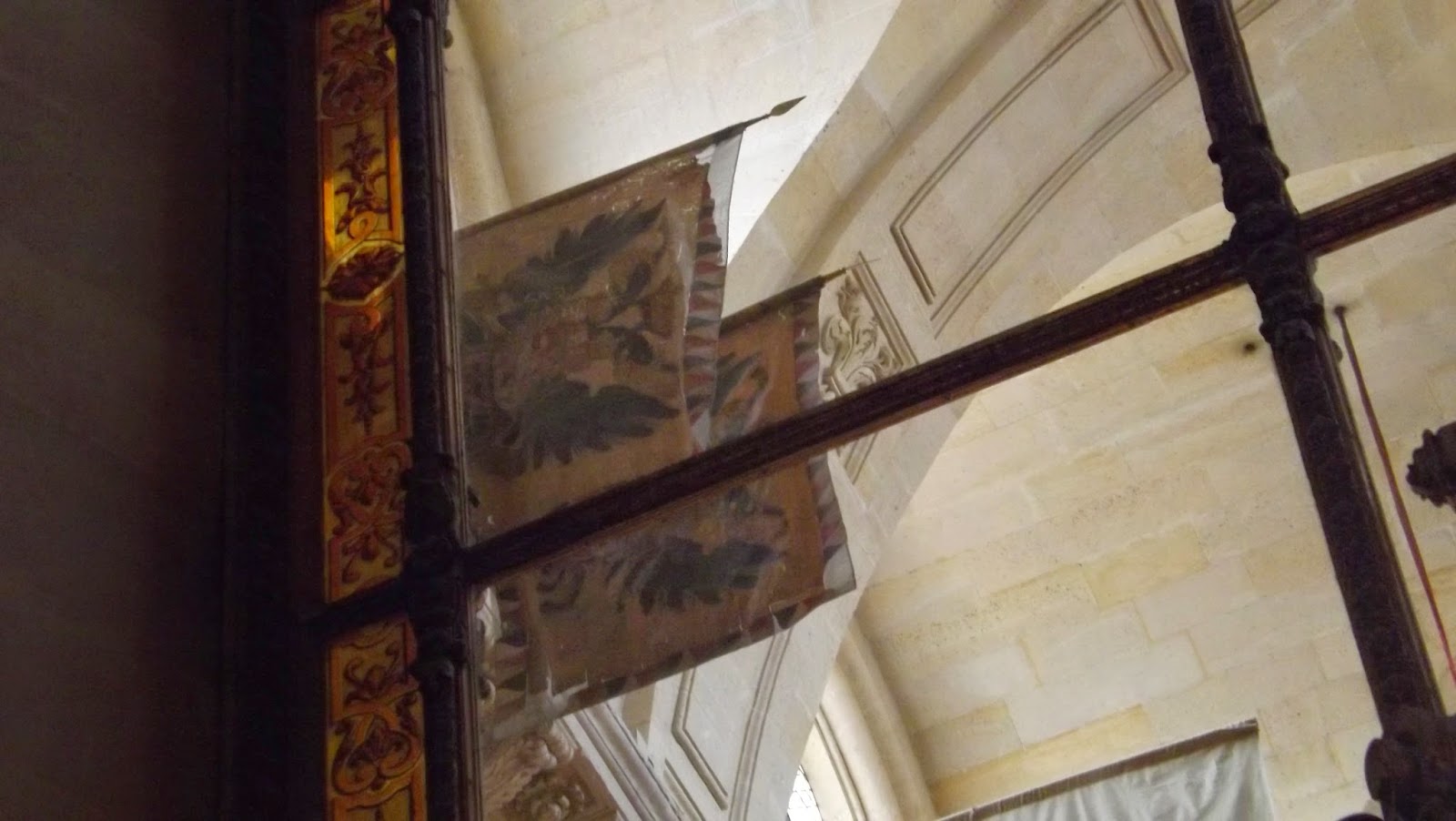 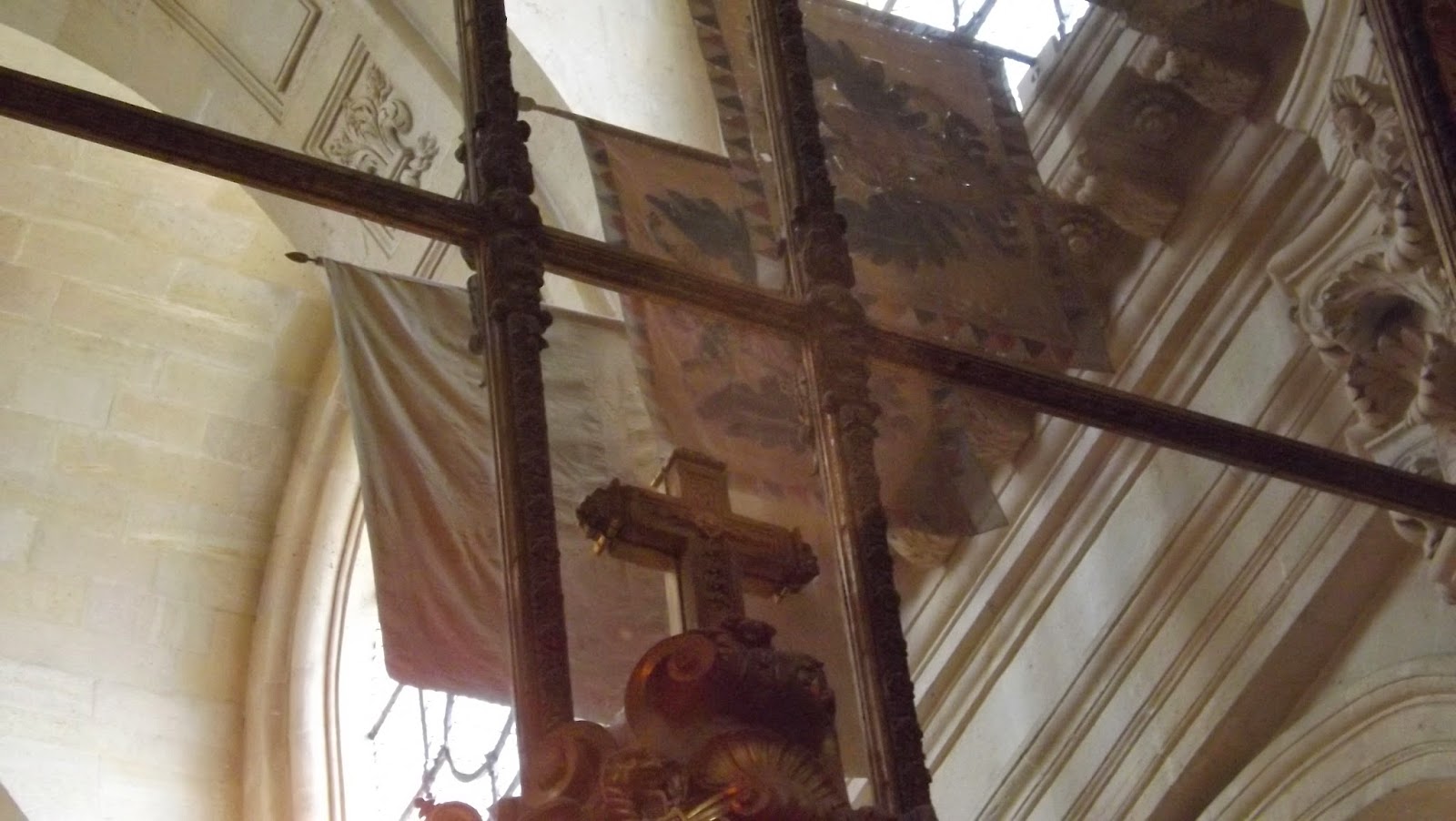 From the tomb of Napoleon it is a short walk through the central courtyard to the display galleries which house uniform, weapons and equipment collections from the early years of the French state through to modern times. Time only permitted a short visit so I went for the 17th to the 19th century collections.

In the courtyard is a superb array of various cannon from multiple periods in history and I am pictured alongside some of "Napoleon's daughters", still looking as formidable as they would have in their prime. 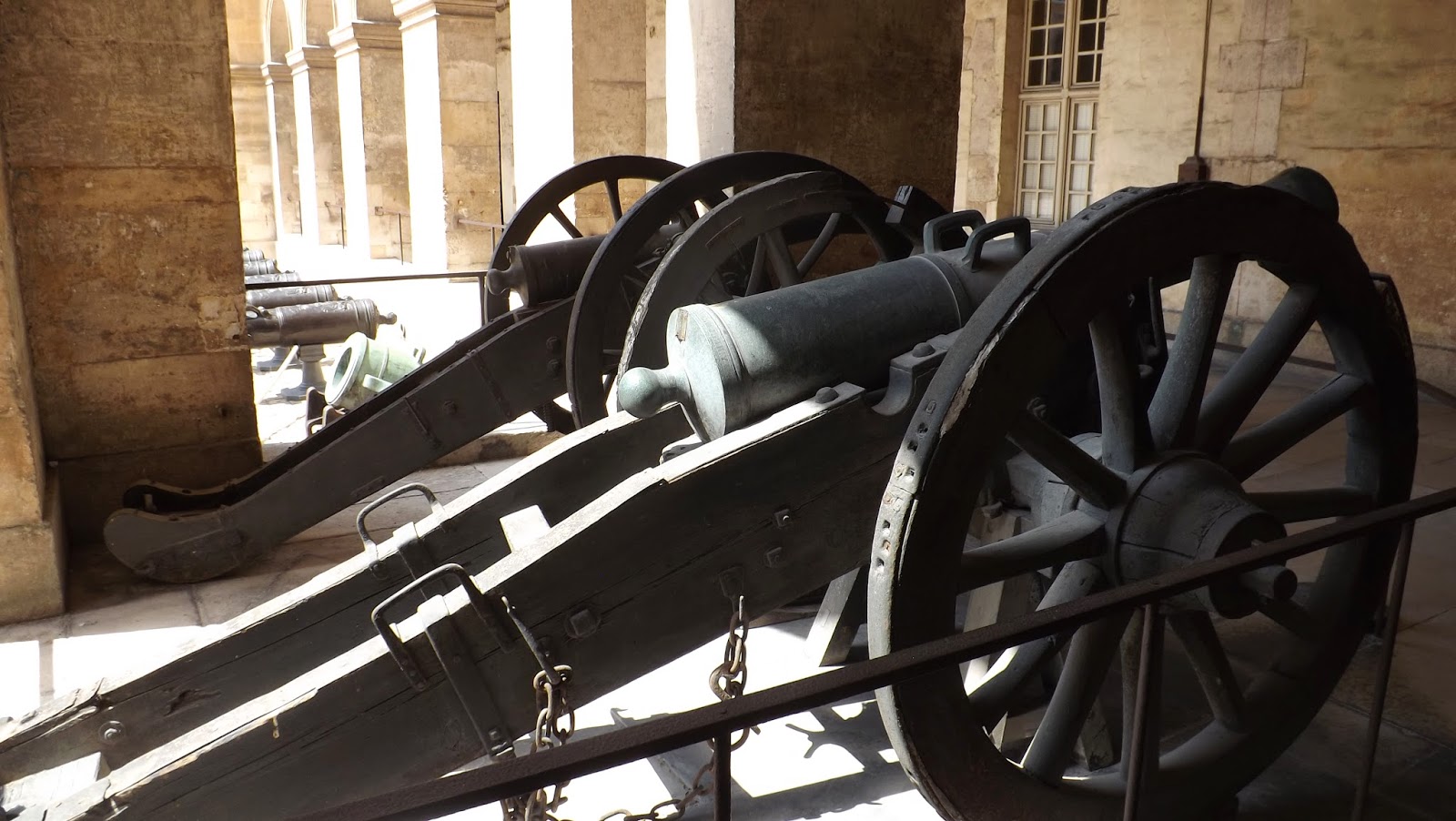 The first main gallery on entering is the Cavalry display where mounted manikins illustrate the look of French cavalry from Napoleon's time through to the late 19th century. It is not until you see these life size models close up  that you can really appreciate the majesty of these units when regiments of three to five hundred of these mounted warriors would have assembled on the battlefields of Europe.

From a painters point of view the ability to see the detail of how these men appeared, the way they stowed their equipment and the actual colour of their uniforms is very revealing and inspiring. Pass me the AB's I need to paint! 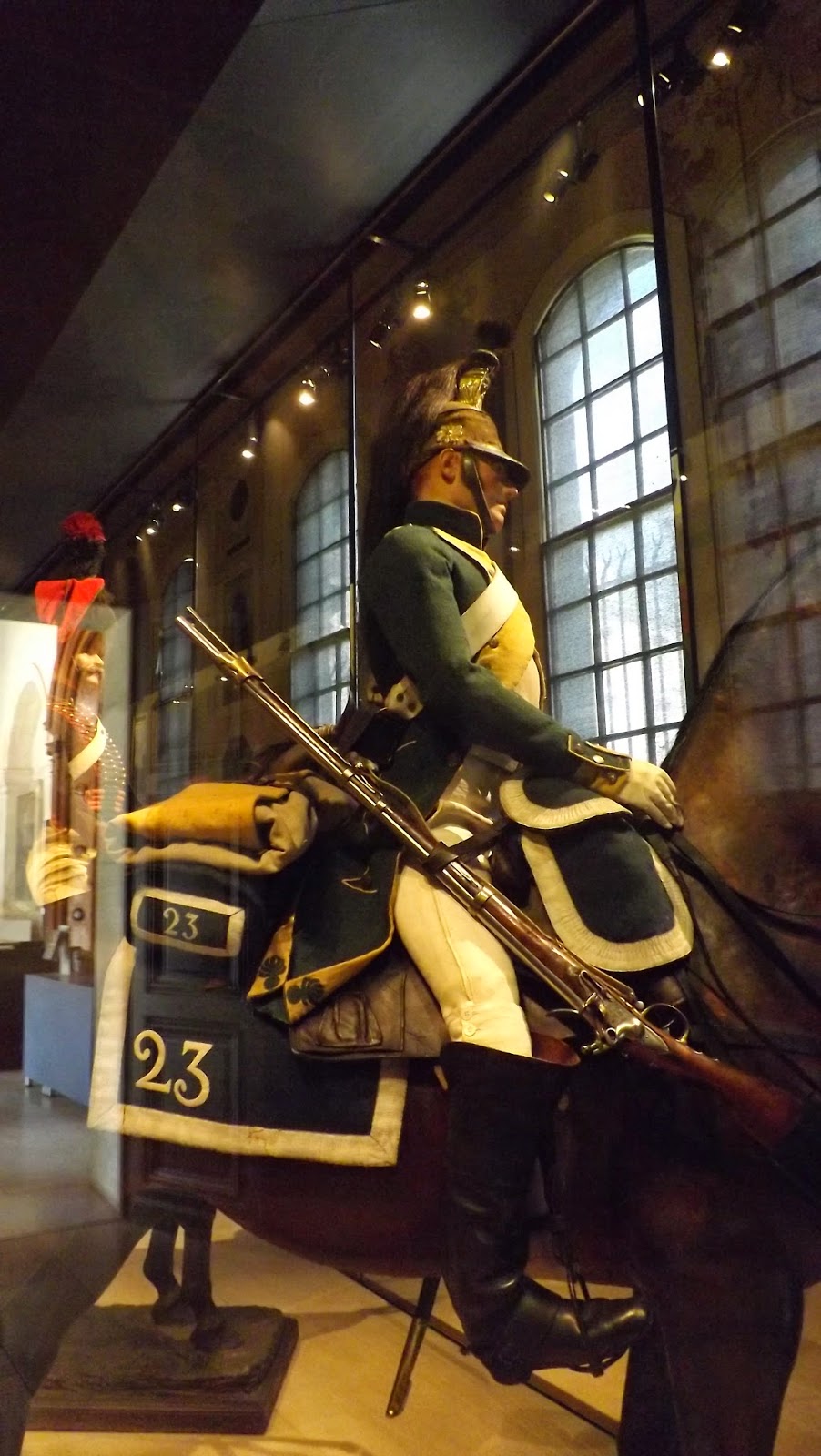 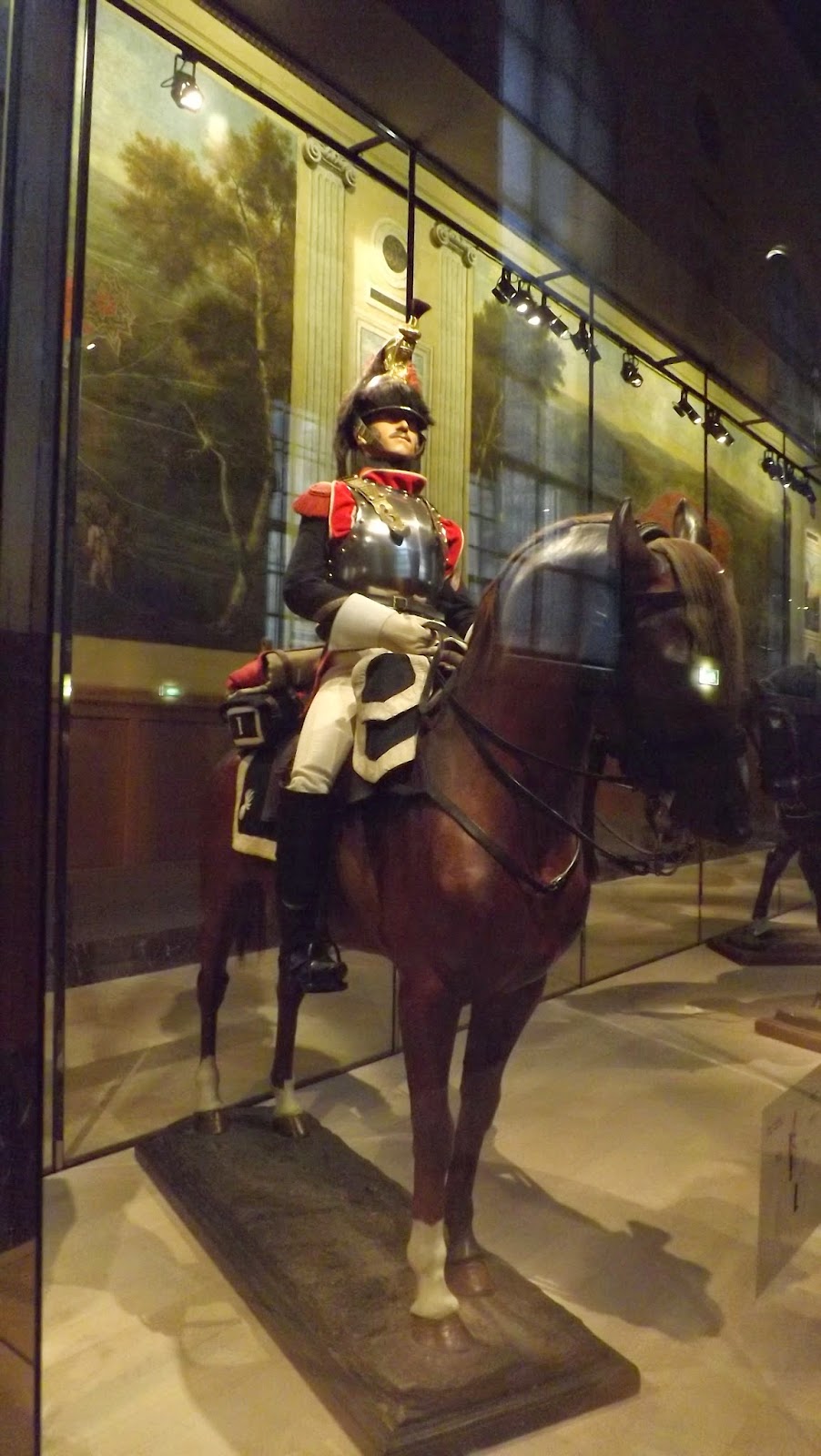 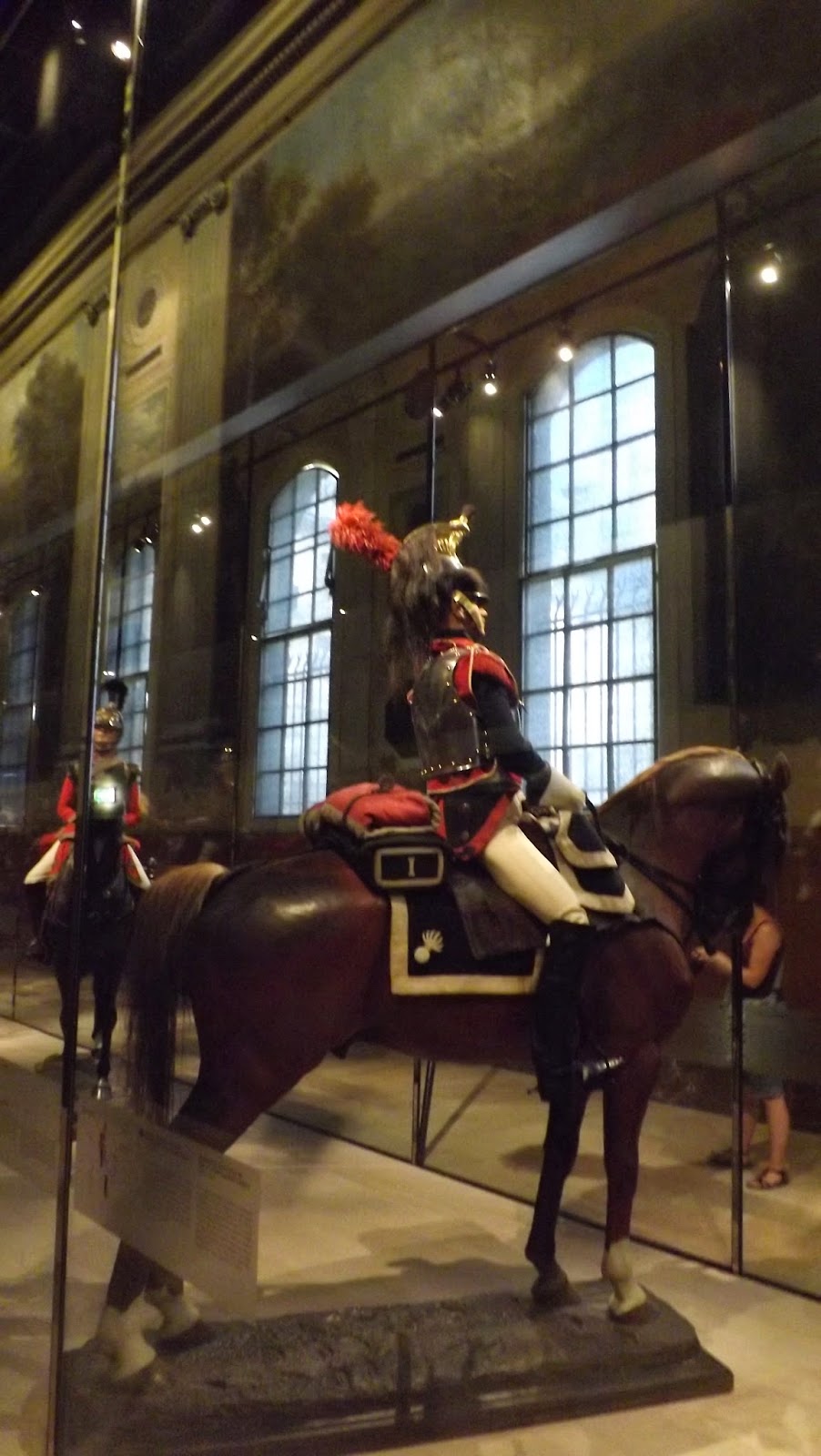 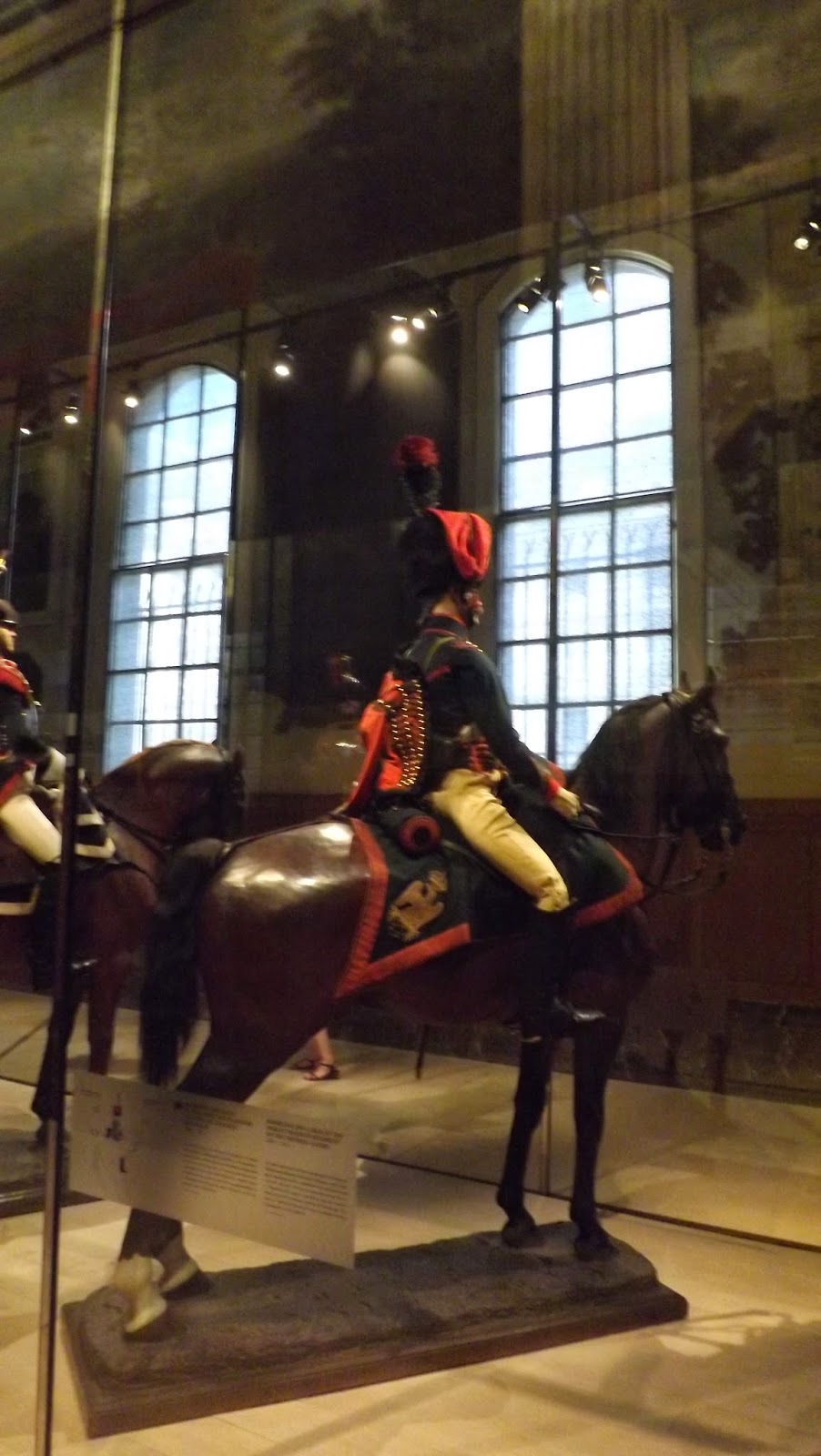 Although the late 19th century is not really my era, I couldn't resist including a picture of the famous Chasseur d'Afrique. This regiment covered the withdrawal of the Light Brigade at Balaclava, and this figure brought back memories of last summers game at Chas's up in North Devon when I lead the Heavy Brigade in our re-fight of that historic engagement.

The next gallery was the weapons and uniforms covering the period from Louis the XIVth through to the fall of Napoleon and the Bourbon restoration. Although primarily interested in the Revolutionary/Napoleonic period I have also included some items that grabbed my eye from other periods.

I love the lace war period and have always taken an interest in the campaigns from Marlborough through to the Seven Years War. One of the great French generals of the linear warfare, wars of succession, era was of course Marshal Maurice de Saxe the victor of Fontenoy.

Alongside the portrait of the great man were trophies from the battle including Hanoverian and British weapons and equipment. Among the highland broadswords was this immediately recognisable British mitre cap as worn by the Scots Greys.

The French played a major roll  in aiding the American colonies in their struggle for independence, providing weapons and munitions and eventually full military alliance. The key architect of French involvement was Vergennes the French foreign minister of the time, pictured here looking very statesman like and quite pleased with the thought of sticking one back on Les Anglais.

Once the French military became involved then key French commanders would lead forces into America to support Washington's Continental army, with General Rochambeau playing a key role in the surrender of General Cornwallis' British army at Yorktown.

From the Lace War period the collection moves into the Revolutionary period with a stunning collection of immediately recognisable items that conjure up all the pictures you have ever seen of the period.


The collection of items belonging to the Emperor is great to see and for me the star attraction is the mobile office of camp bed and writing tables. Just think of the plans and schemes that were finalised around these specific objects. A wargamers paradise!

The French Hussar in all his marshal glory. You have to see these dolmans and pelises to appreciate the stunning workmanship and imagine them in their heyday when the colours would have been even more vivid than today. You can see why the girls fell for the hussars. 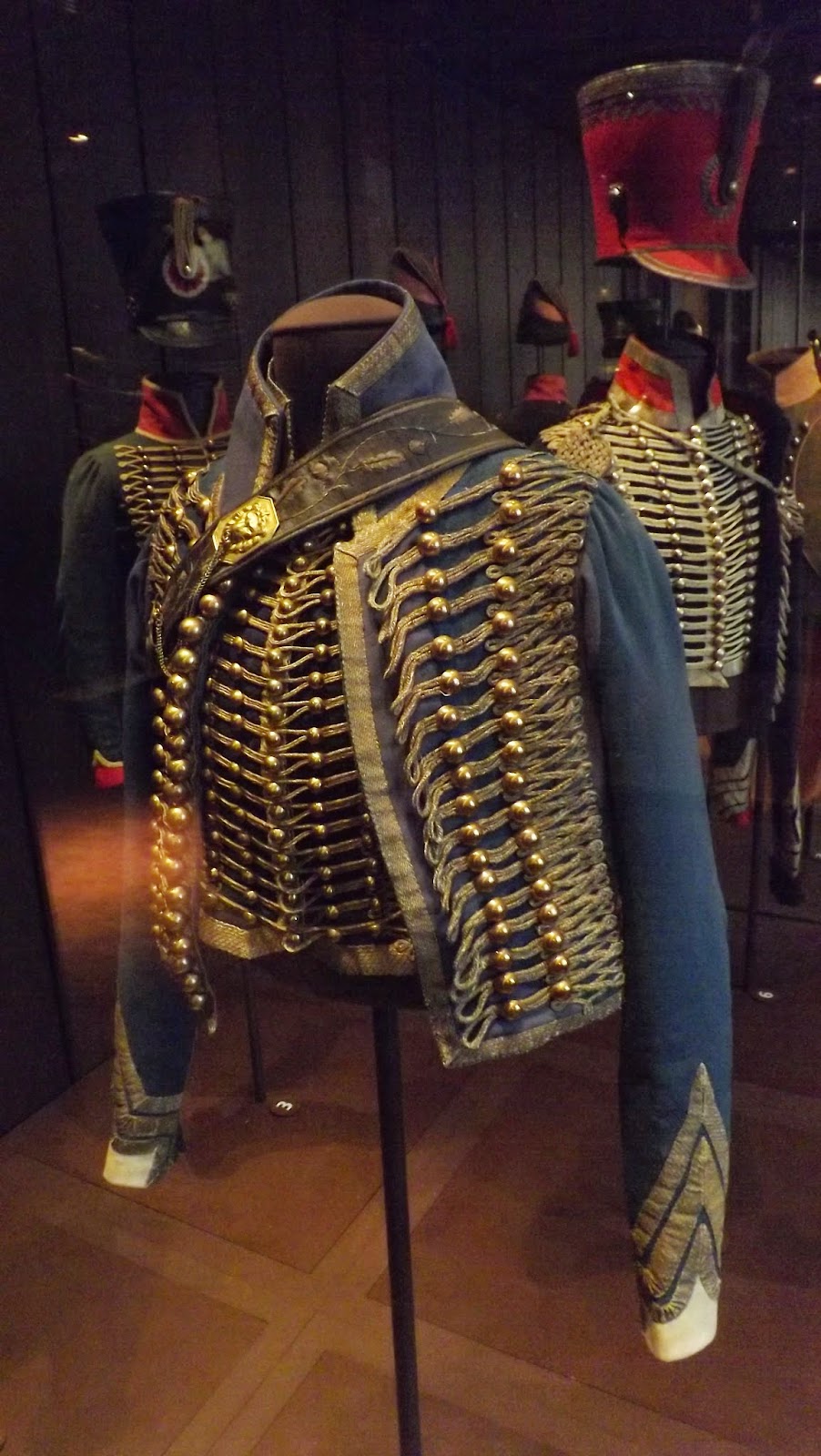 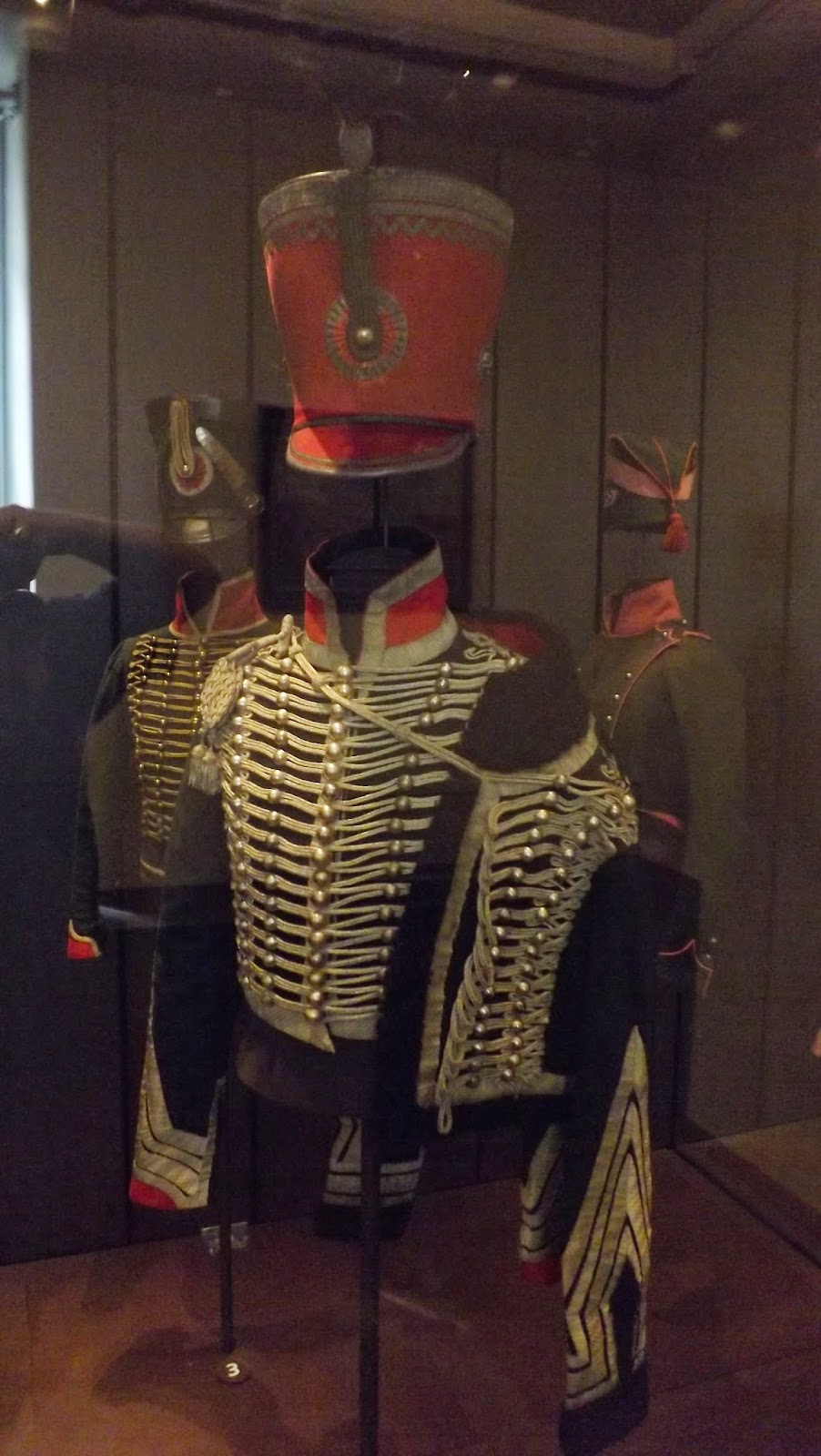 Of course where would the hussars be without a bit of horse artillery in support?

Next up the Guard, headed up by the Old Grumblers. I feel a bit a bit of a Grognard myself.


As a Peninsular War enthusiast I was keen to get another view of the Marines uniform. At some stage I am going to do Bailen and of course a lot of these chaps got put in the bag when Dupont surrendered to the Spanish.


On walking down the corridor between galleries I came across this stunning panorama of Borodino and found myself grabbing cameo shots from along its length. The action scenes are great and the eye was drawn along its length by the various small scenes of battle captured in the overall scope. 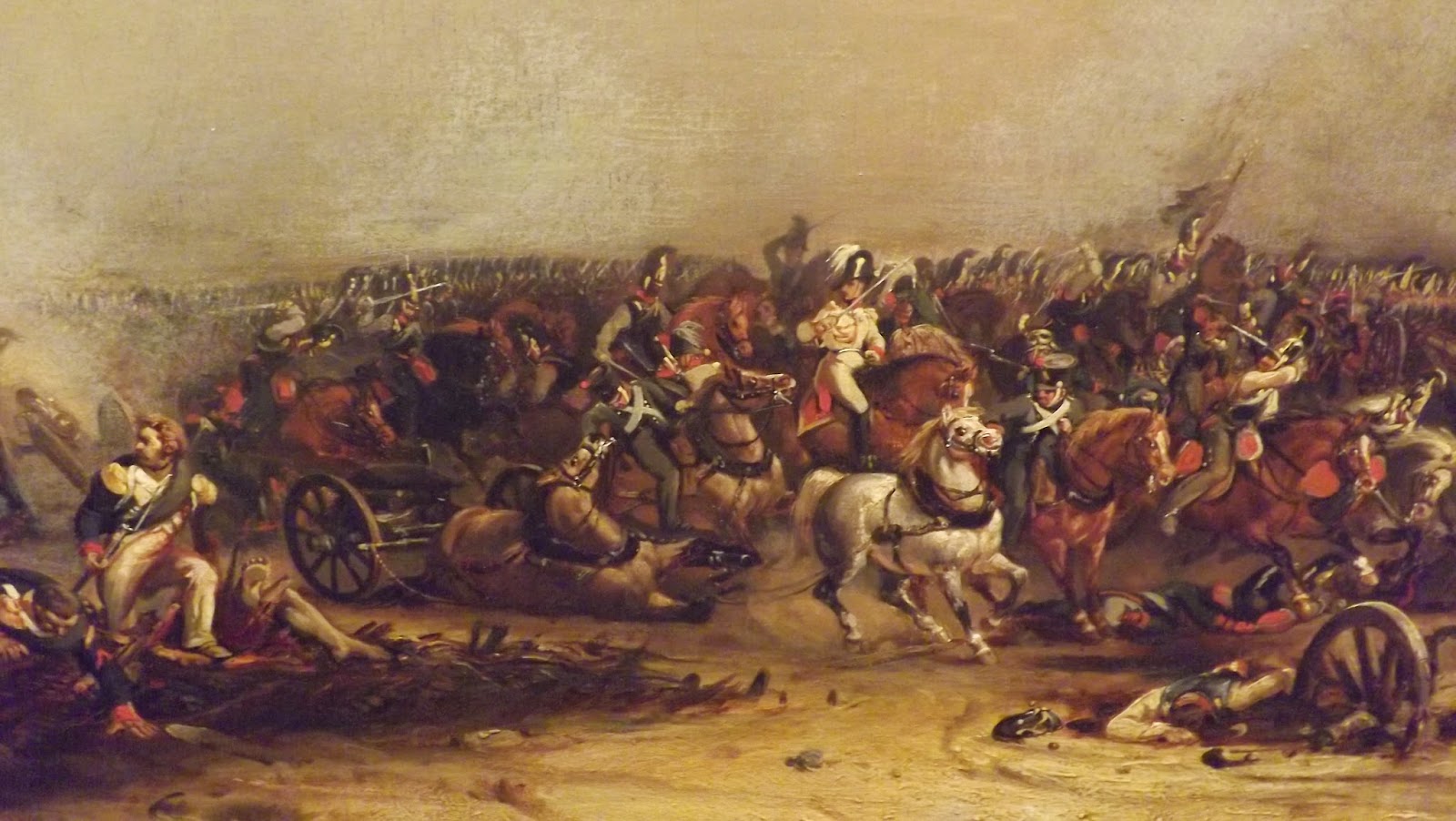 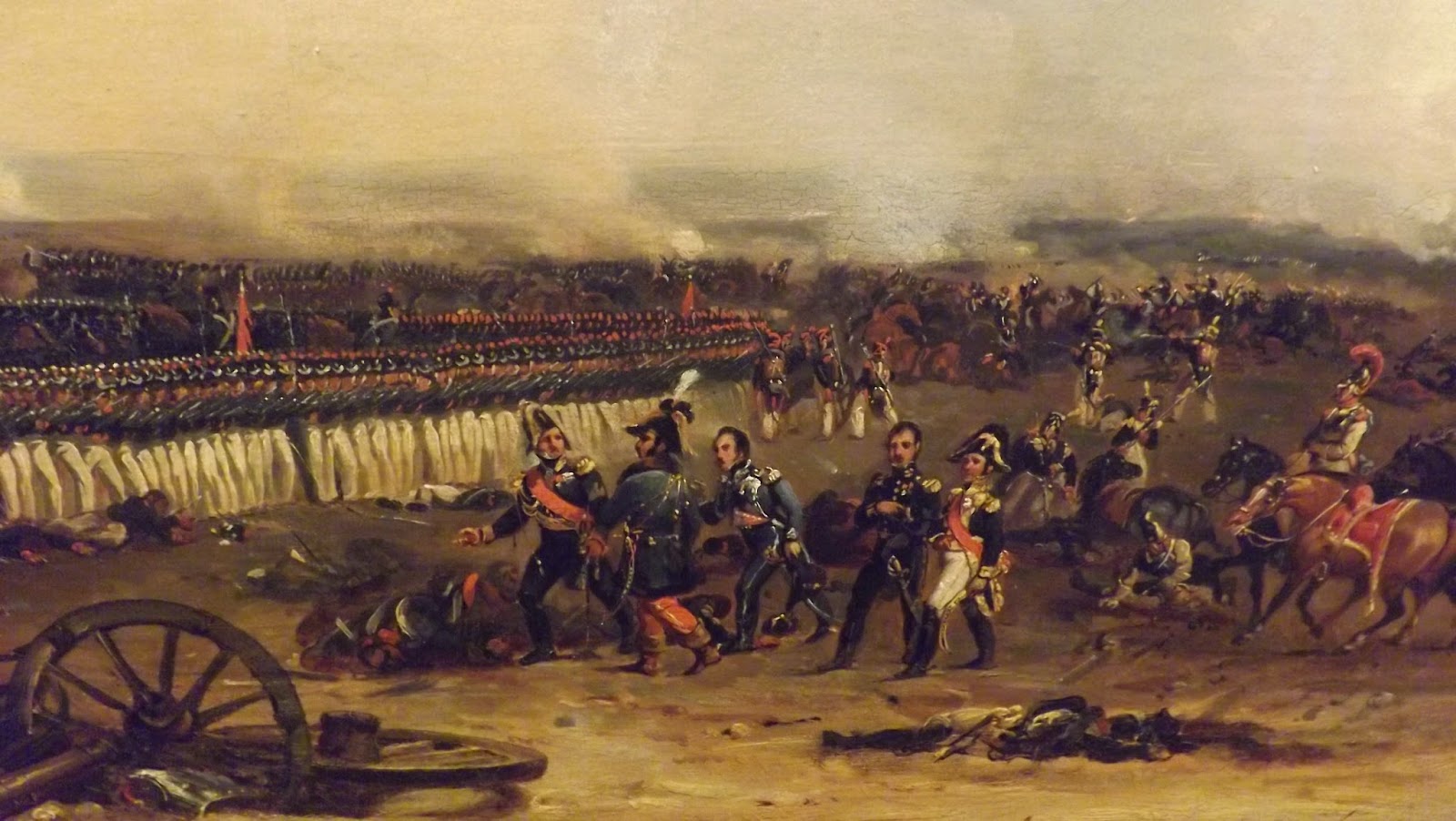 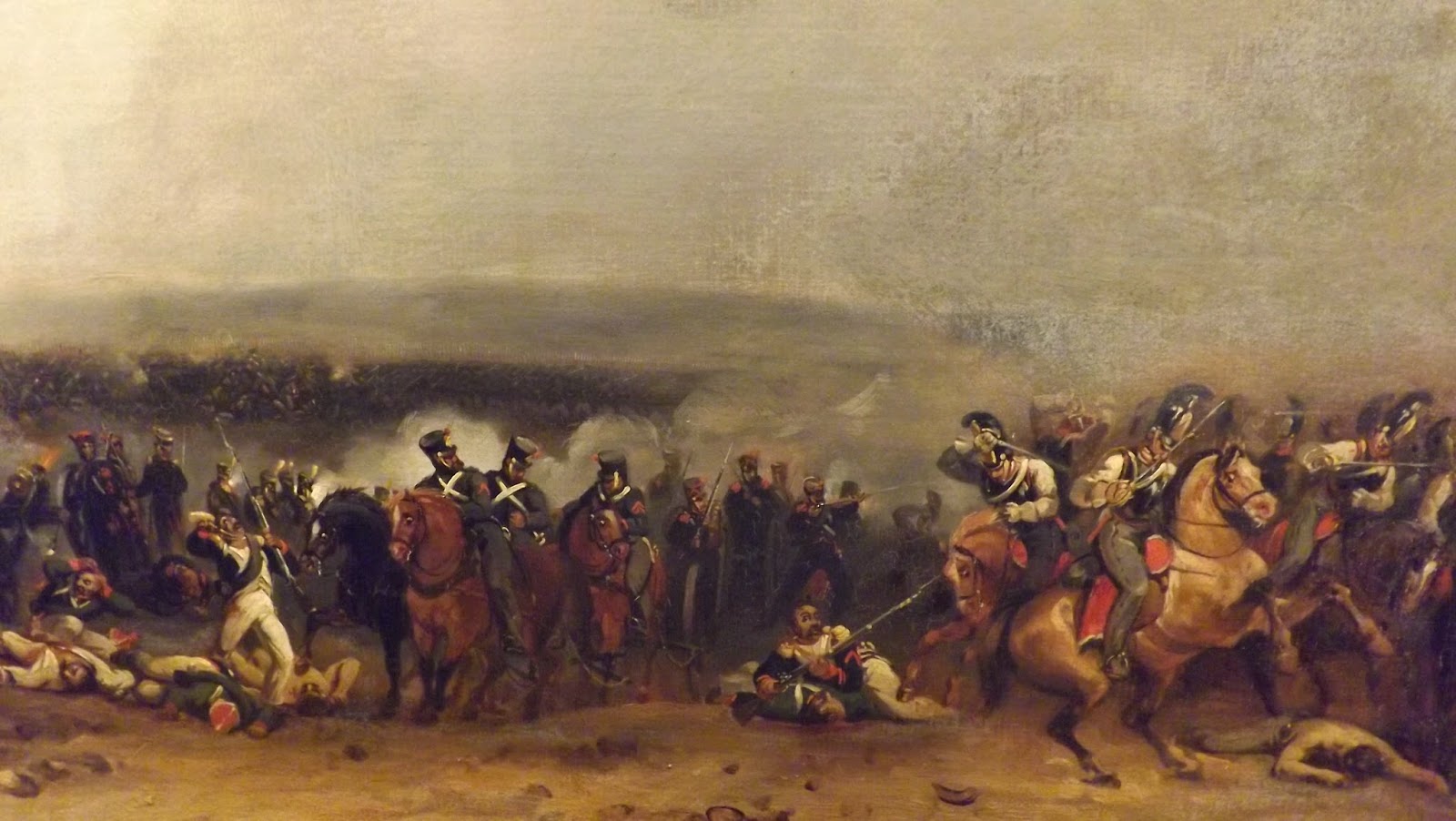 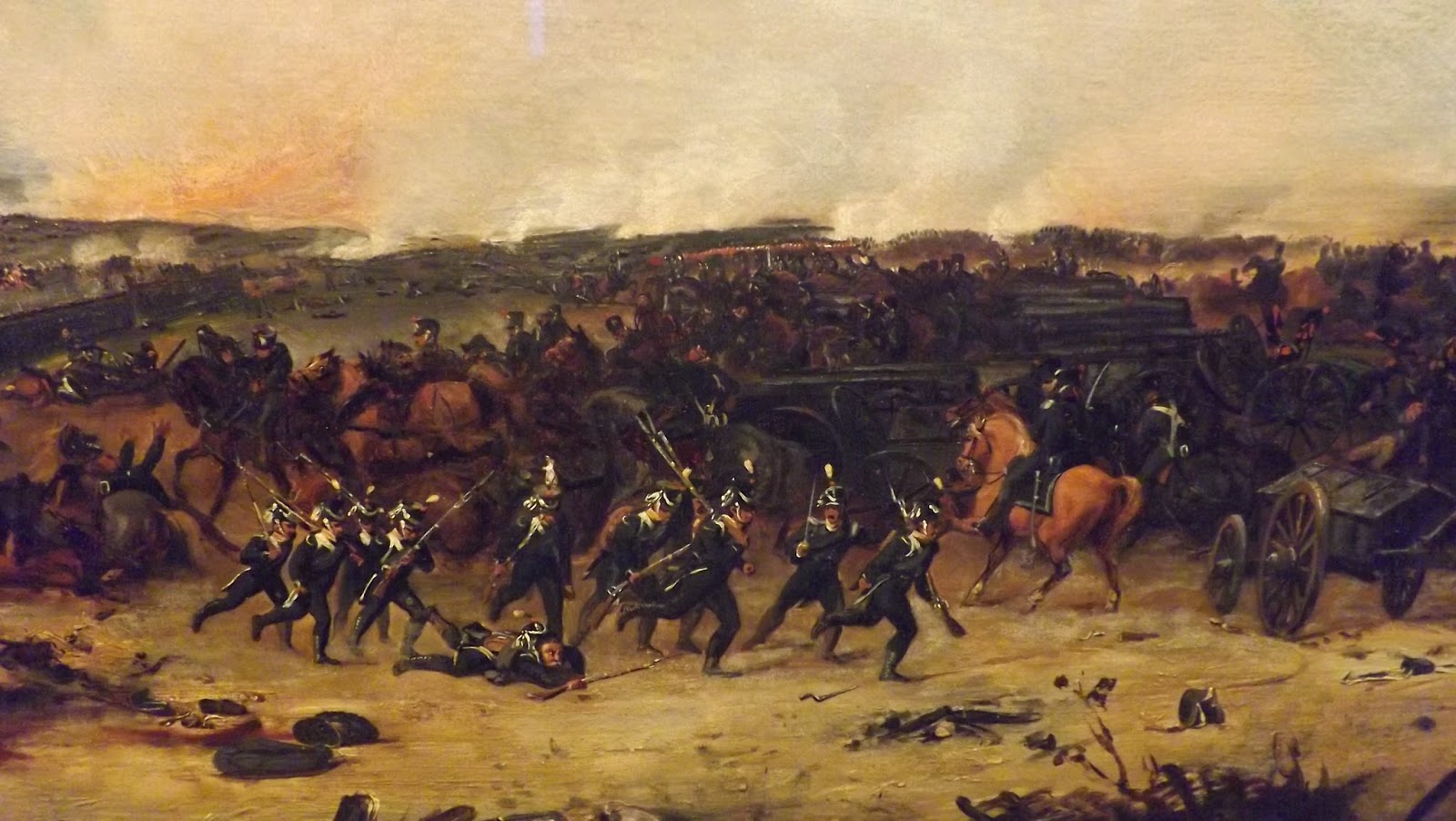 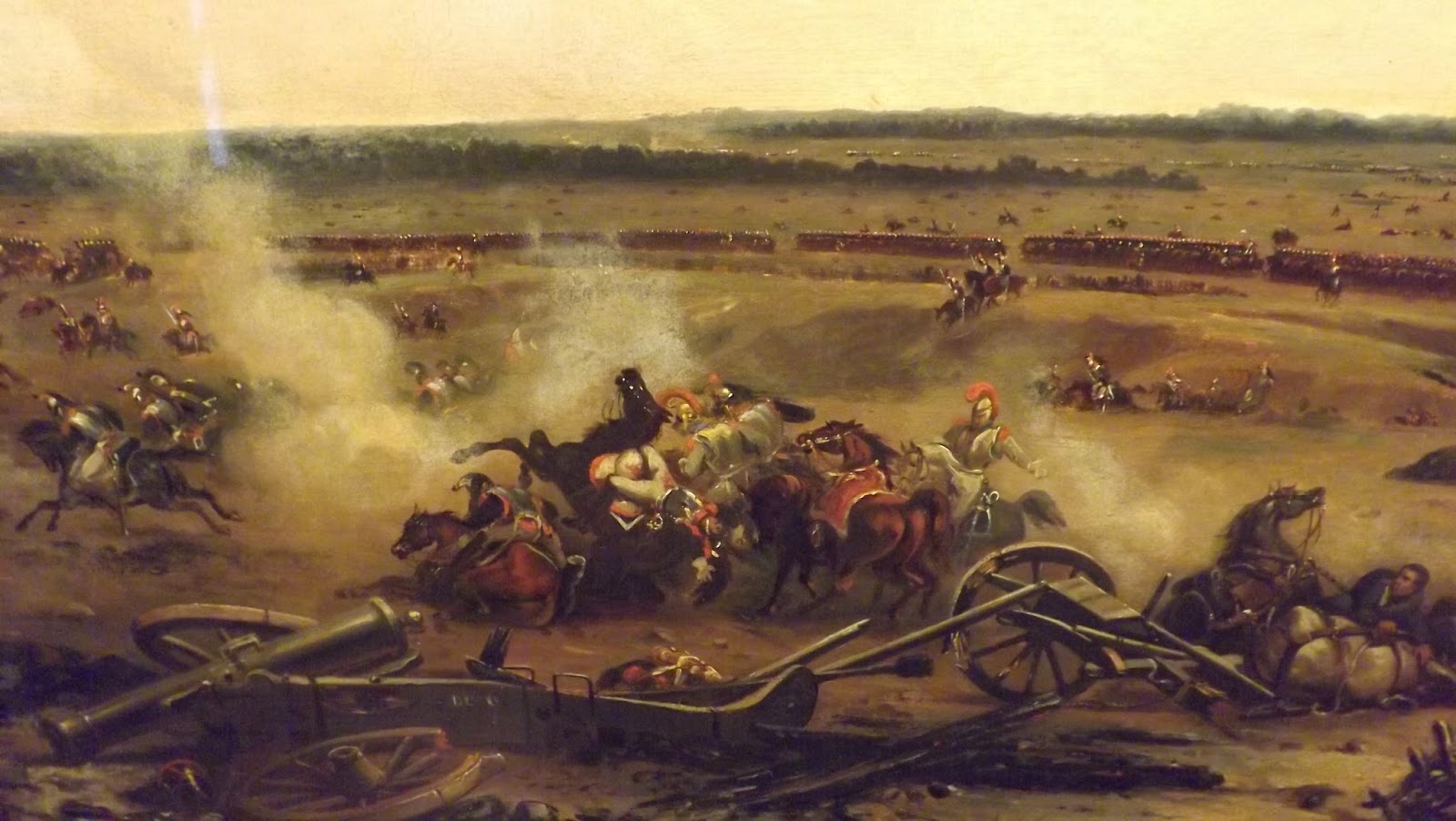 Again with my Peninsular War agenda in mind I was immediately drawn to the display of lances and Czapkas and was delighted to see an example worn by the Vistula Lancers. The plate and lace are different to most illustrations I have seen. The nearest I could find is illustrated below the photo. 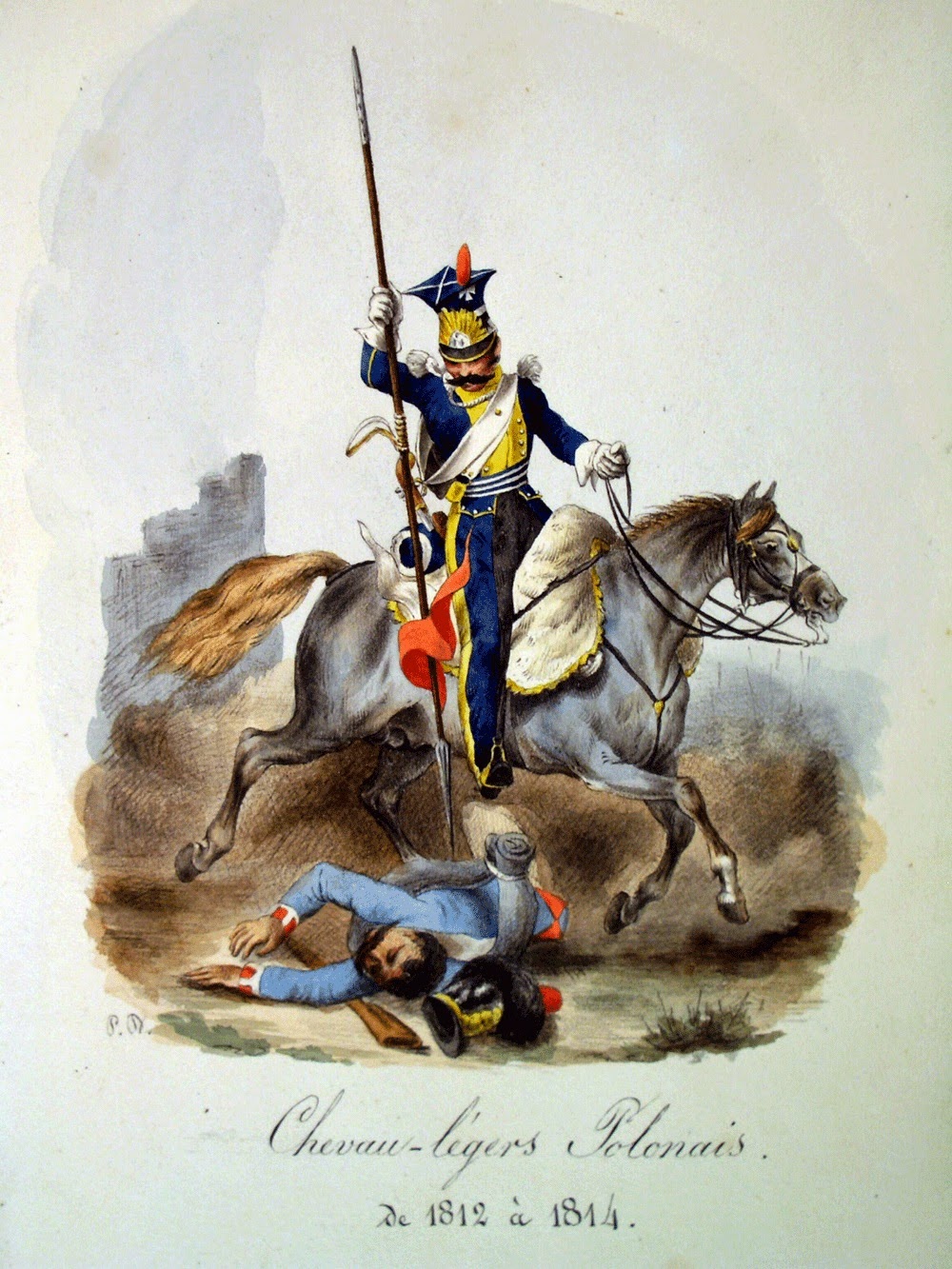 The uniforms of some of the French allies can be seen, and I was particularly interested to see the Colour staffs carried by Neapolitan troops, surmounted with a prancing horse. Now that was news to me!

The final gallery featured relics from the 100 days leading up to the Bourbon restoration.

The display of items from a British infantrymen are interesting, particularly the early model leather shako, looking even shorter in height without its woolen company tuft above the regimental plate. 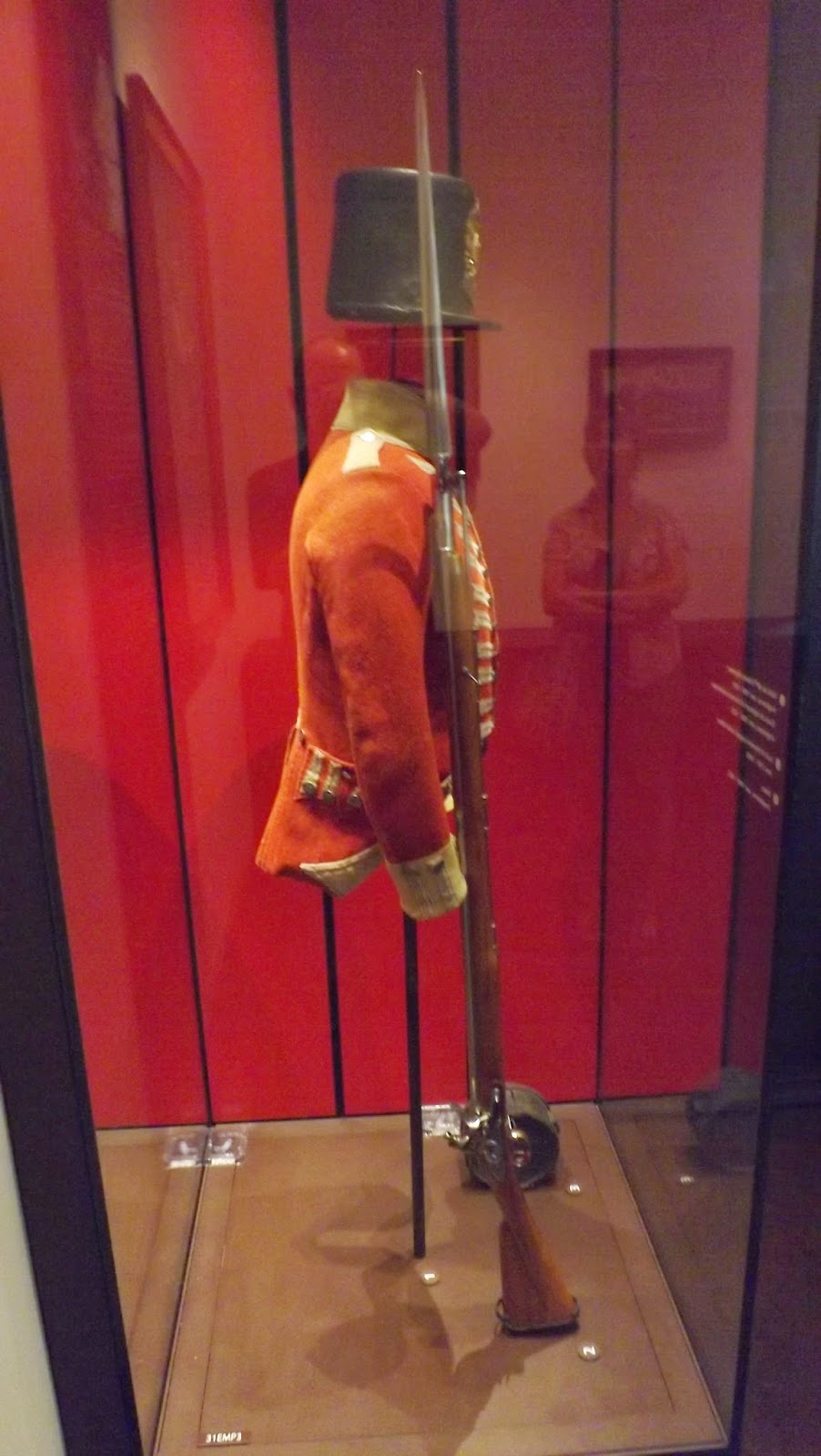 The British sabres on display show both the excellent 1797 Light Cavalry sabre, one of the best British sabres ever produced, with the weight perfectly balanced to put the cut into that wickedly curved blade. The power of this weapon was demonstrated by the killing blow inflicted by Corporal Logan of the 13th Light Dragoons in combat with Colonel Chamourin of the 26th Light Dragoons at Campo Mayor in 1811; killing the Colonel with "a cut that nearly cleft his scull asunder".


The British heavy cavalry sabre was another matter, being intended as a weapon to be used with the point to deliver a killing blow rather than a cut, it was produced with a hatchet point to its blade as seen below. Many veterans including Sergeant Ewart of the Scots Greys administered a field modification to their weapons to achieve the "point" if you'll excuse the pun.

The well known picture below by Denis Dighton illustrating Ewart's famous action, compliments Dighton's attention to detail, illustrating Ewarts sword having the modification, whilst his colleague in the rear administers a cutting blow with the standard blade. Sergeant Ewart's trusty weapon is on display in Edinburgh and is on my list to see. 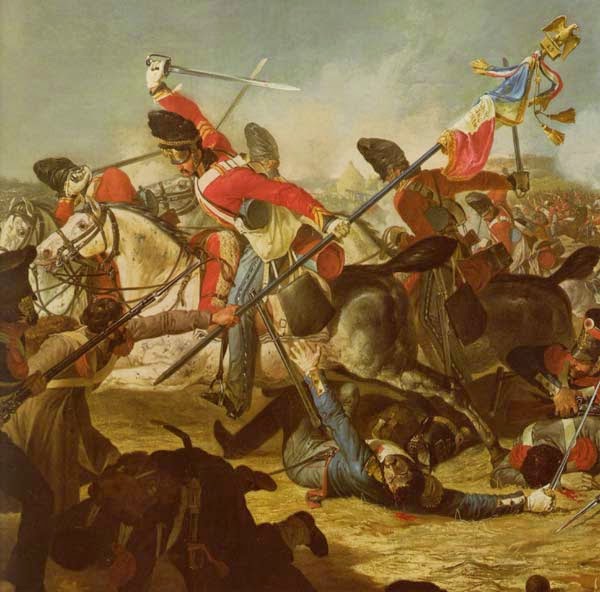 And finally as a compliment to the British cavalry of the Napoleonic era the museum has an officers pelisse of the famous 15th Hussars, who fought magnificently in the Waterloo campaign but as a Peninsular fan achieved their most famous victory in 1808 at Sahagun besting two regiments of French cavalry and sending a message to the pursuers of Sir John Moore's army to beware of the British rearguard.

This little record of my visit to Les Invalides really only scratches the surface of this amazing collection. I hope from what I've posted you can see how very worthwhile a visit to this great museum really is.

Footnote. On our walk through Paris on a hot sunny morning, working our way towards the Tuileries Garden, we came across a remarkable statue in the Place de Clichy. I realised by the style that this recorded not only a military event but one set during the Napoleonic period. I took a picture of the monument with the plan to check it out on the net on my return home. 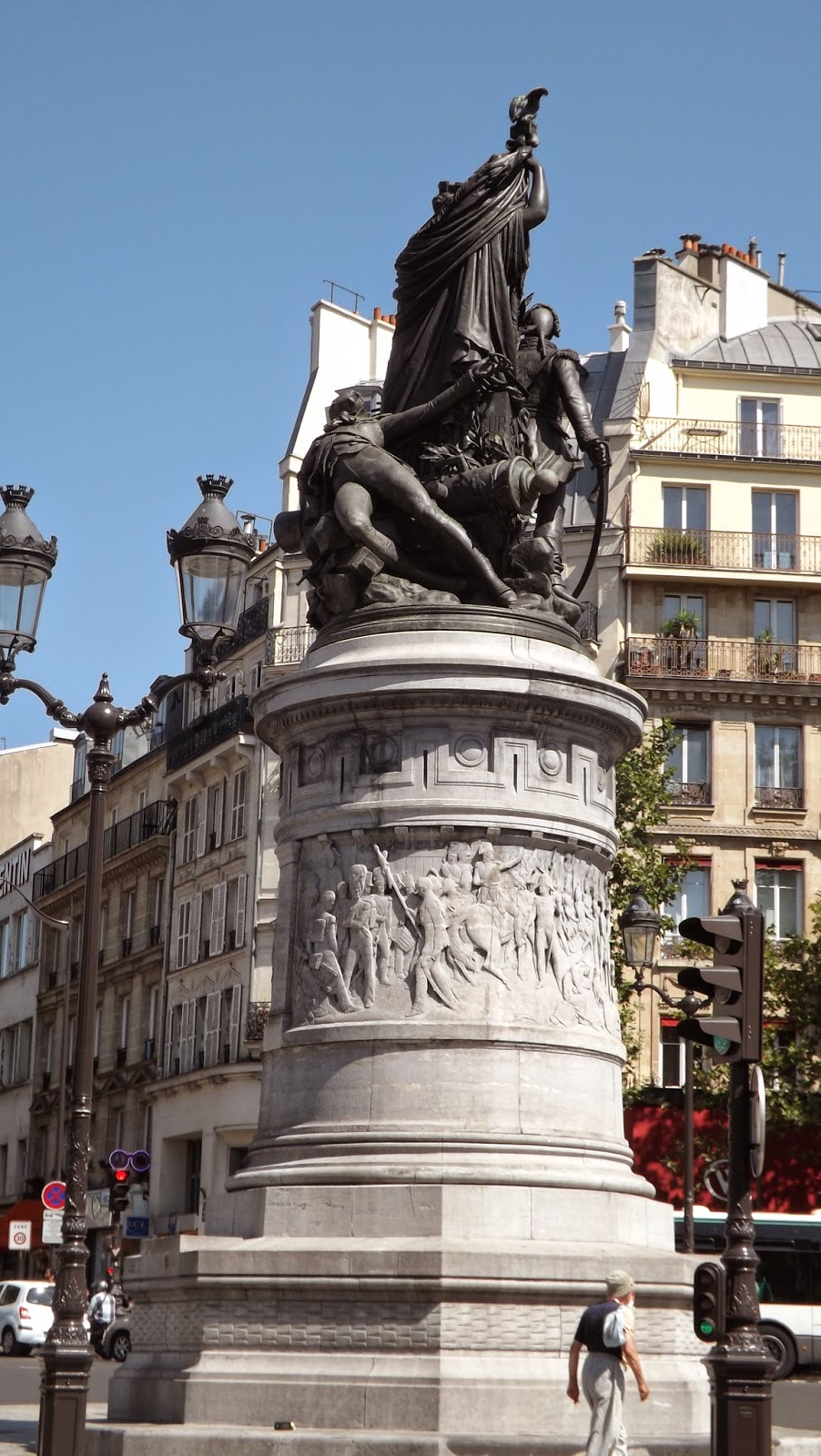 It turns out that the monument records a very interesting conclusion to the 1814 campaign which I am following for the 200th anniversary in my little journey around Eastern France. If you want to know more then just follow the link.

A rather long post but I hope you'll agree it was worth doing and will compliment the next posts covering more of the battles and sites of the 1814 Campaign together with a planned trip to Fontainbleau Palace. I am already picturing that scene with Ney telling the Emperor it's all over.
Posted by carojon at 14:09