For the third scenario in a series planned to cover the key actions at Talavera, the Spanish 3rd Division had a critical role to play anchoring the link between the Spanish and British armies defending around the artillery redoubt on the small knoll known as the Pajar de Vergara.

They became involved in the fighting later in the afternoon when this position was attacked by General Leval's German Division.
http://jjwargames.blogspot.co.uk/2014/10/napoleons-german-division-at-talavera.html

The Badajoz regiment is one of those units that came from the forces involved in the Battle of Gamonal in November 1808. 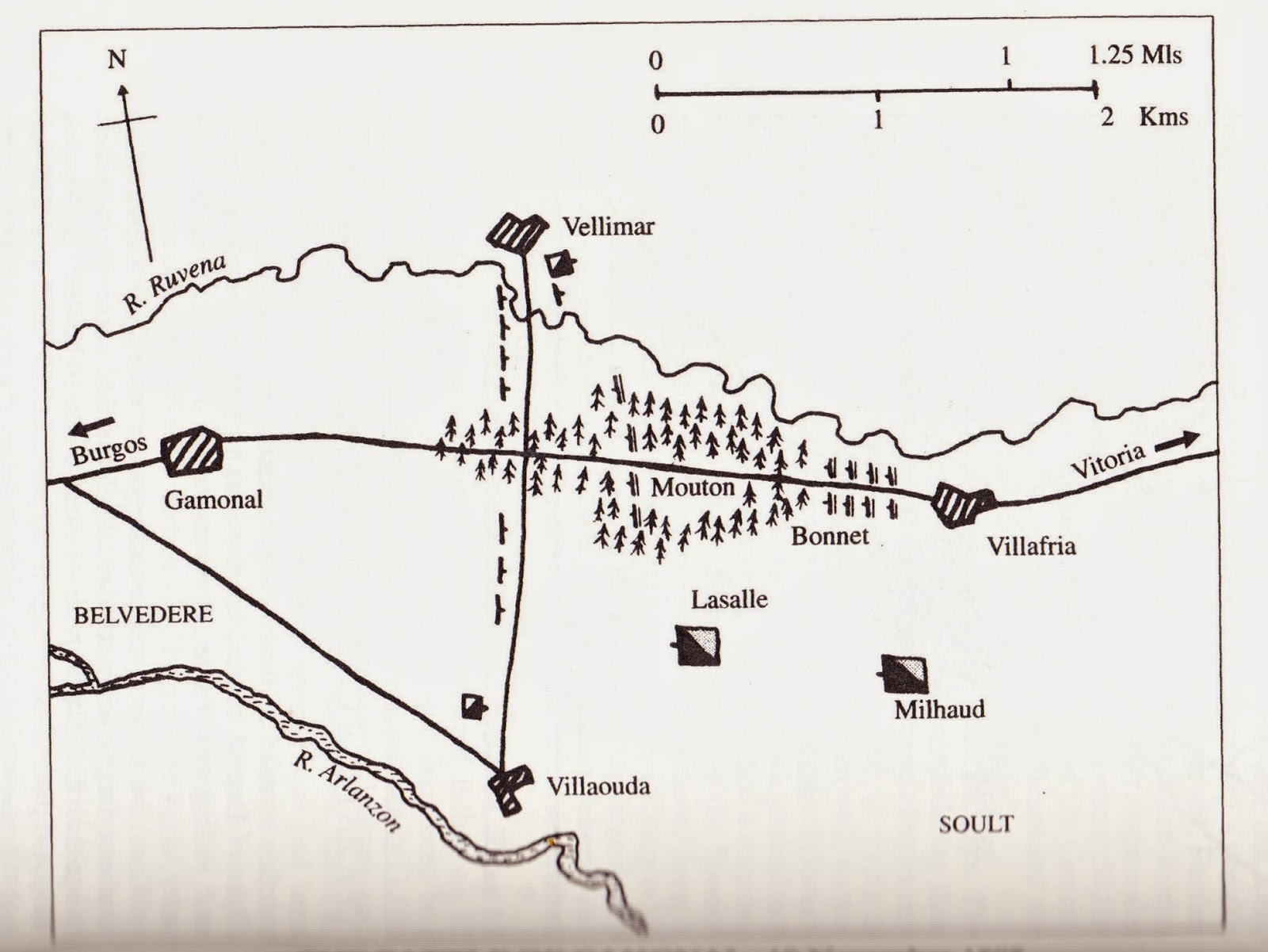 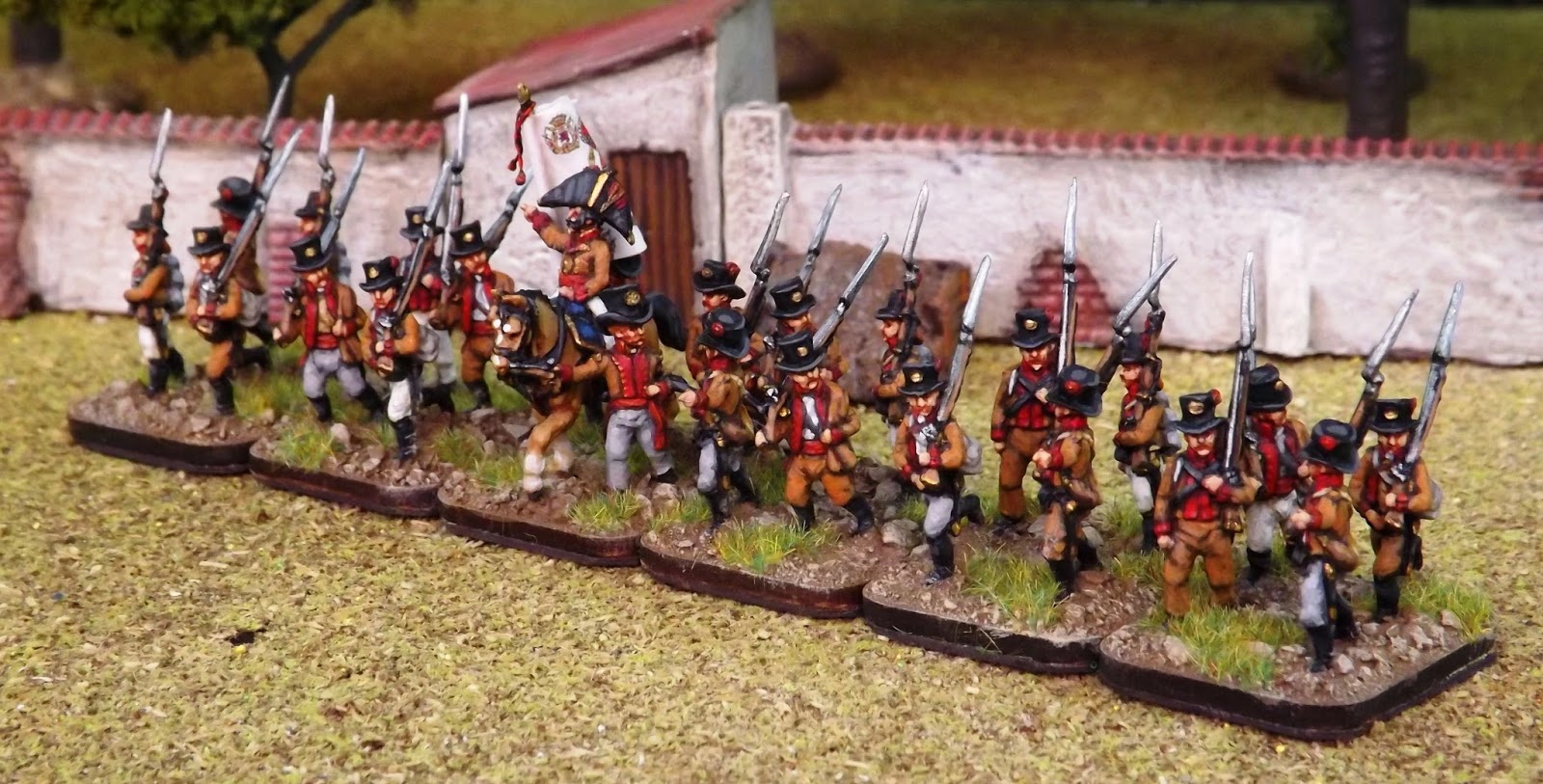 In what proved to be a hopeless deployment by Belveder of too few troops in a very thin line, attempting to block the road to Burgos; the two battalions, on the Spanish right flank, took the brunt of Lasalle's cavalry attack. Whilst attempting to form square, they were simultaneously assaulted by Mouton's infantry brigade emerging from the woods to their front.

The attack proved irresistible and the Spanish army broke losing 3,000 out of the 10,000 strong force, all 16 of their guns and 12 colours. Any further destruction was probably avoided because the French got distracted by the potential of looting Burgos further up the road, and broke off the pursuit.

They next show up, three weeks later, among the force at the Battle of Somosierra Pass on November 30th 1808 at well below half strength for the whole regiment, fielding a weak battalion.

This force to was unceremoniously pushed back by Napoleon's troops as he secured Madrid, probably saved from greater loss because of the Emperor's focus being, very much, on taking the capital.

All credit to the Badajoz Regiment for regrouping after its two defeats in 1808 and having another go, fielding two battalions at Talavera, six months later. However the defeats and severe losses may well have taken a toll on the morale and confidence of the regiment.

To quote Lipscombe in the Peninsular War Atlas.
At about 1900 hrs on the 27th July 1809, Sebastiani's infantry was preceded by Merlin's light cavalry,

"who used the cover of the olive trees to push up to reconnoitre the Spanish lines. As the chasseurs came into sight, the front battalions of both Manglano and Portago's divisions opened fire, and then followed the most extraordinary scenes as four of the forward battalions broke and ran to the rear for no apparent reason. The battalions on both sides and those to the rear held firm and at no time was there a gap that could have been exploited."

He goes on to quote Napier in the reference,
"This incident has been inaccurately reported in some British sources, even suggesting that the entire Spanish line and all the artillery gave way. The four battalions in question; the 1st and 2nd Badajoz, Leales de Fernado VII and Toledo (Toreno incorrectly lists Trujillo) were hunted down by Cuesta's cavalry and after a court martial the following day 25-30 were executed. The number would have been higher had Wellesley not intervened. However it has to be added that there were British stragglers amongst the throng which fled west, spreading alarm and despondency."

One cannot but feel a certain sympathy for these soldiers, who so poorly led by their generals in previous times, end up so lacking in their confidence to meet and defeat the enemy that even their own firing is enough to cause then to break to the rear. At least Wellesley had the good sense to temper Cuesta's response, probably aroused at his own embarrassment for his men breaking in such a manner. 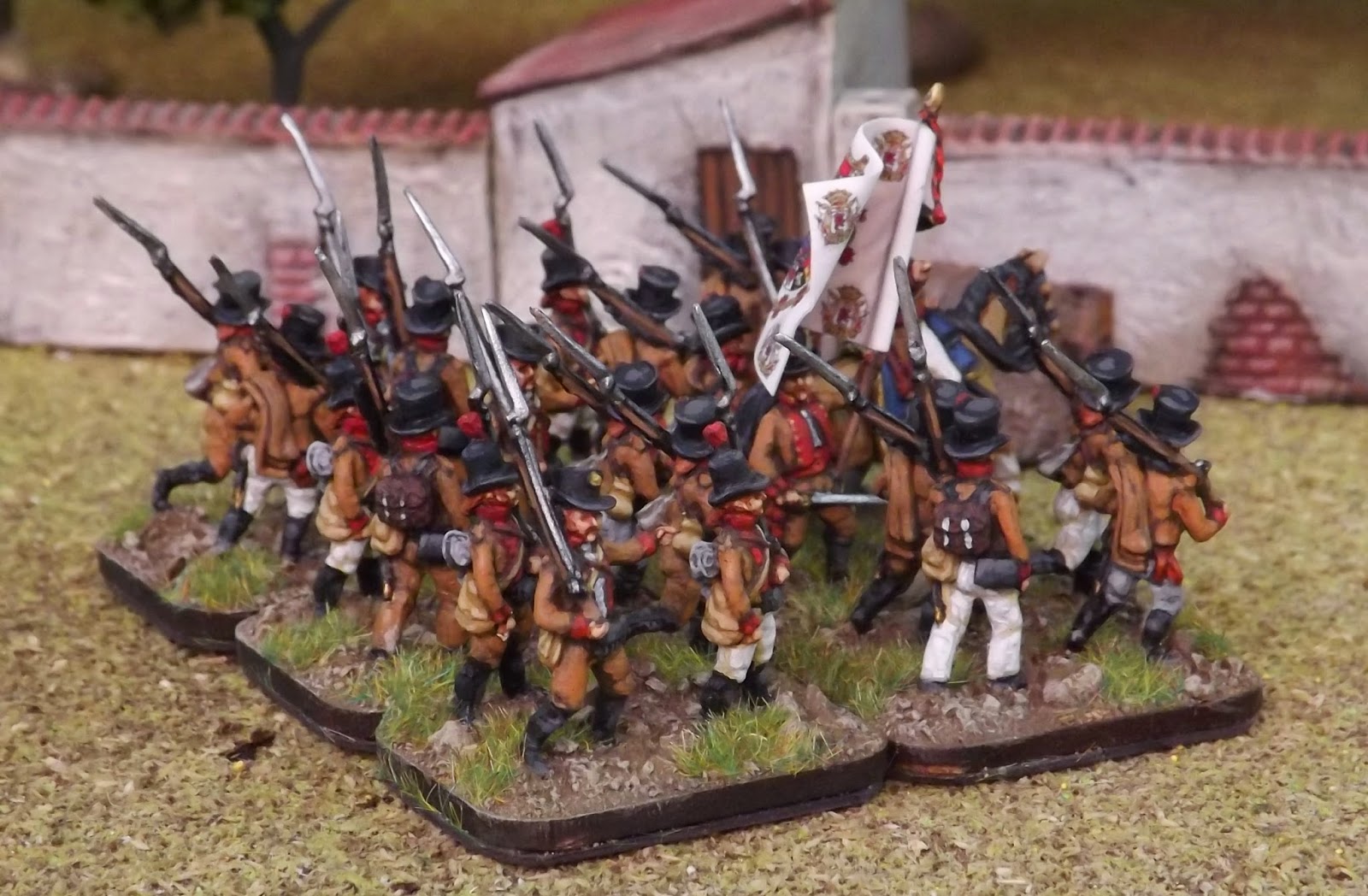 I have chosen to model the 1st Badajoz in a typical volunteer infantry uniform, indicating them as the first battalion by having them carry the 1768 pattern Coronella or King's Colour and be led by a mounted colonel. Whether they carried these standard Colours is debatable, but without contradictory information I have decided to use them.

The battalion is composed of figures from the AB range with the Colour from GMB Flags. 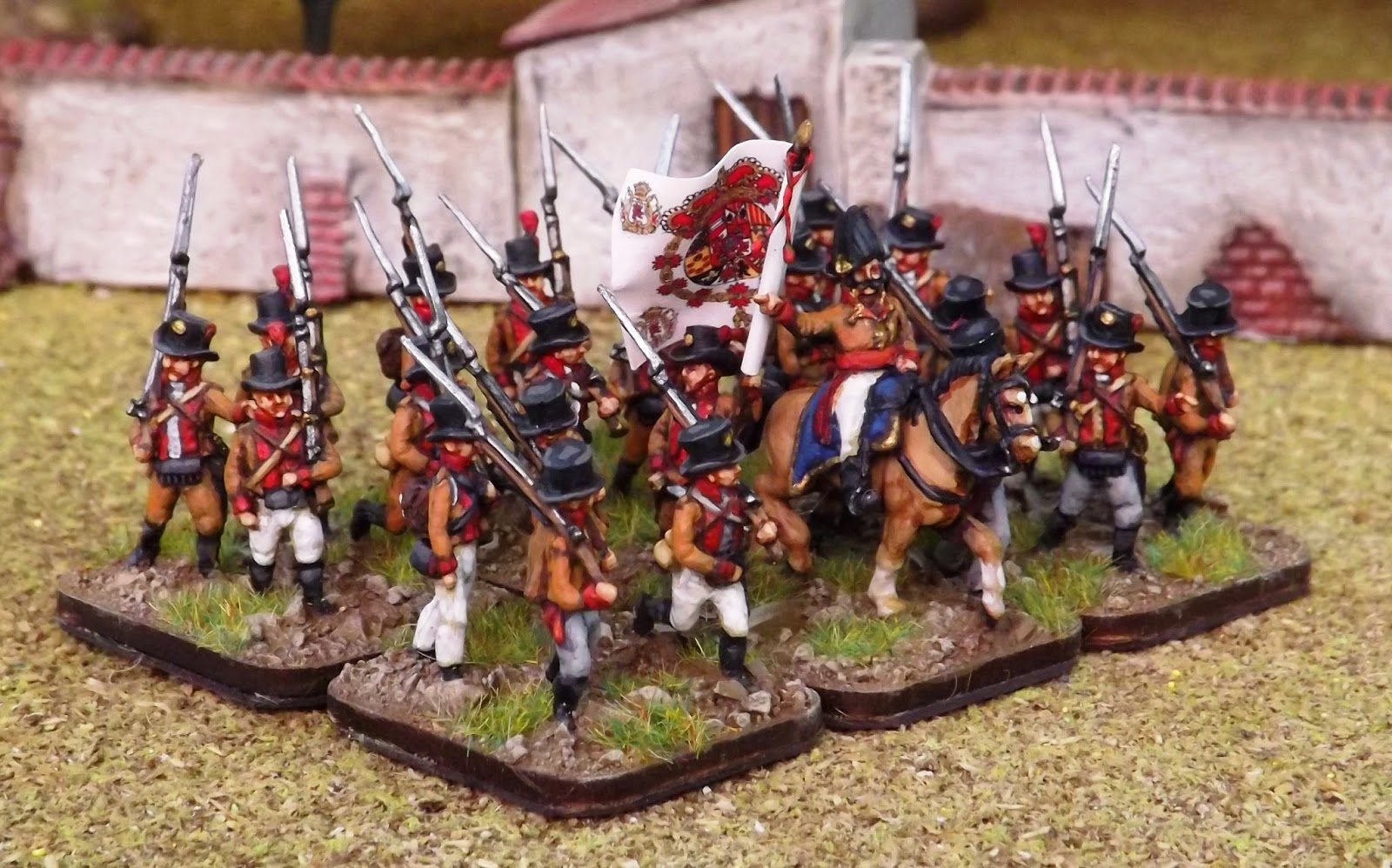 Next up the 2/48th(Northamptonshire Regiment)Foot, that completes Tilson's Brigade and the forces required for the Talavera night attack scenario.
Posted by carojon at 22:17