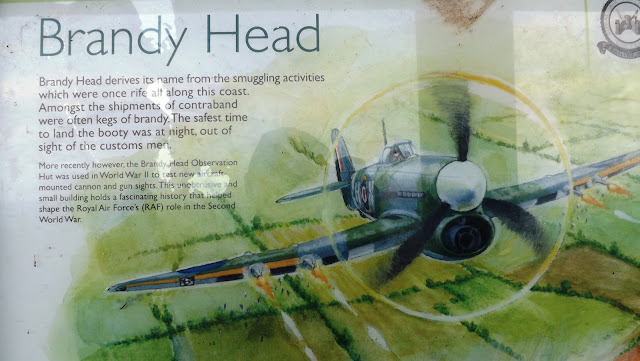 The weekend before last, Carolyn, Tom and I decided to do the walk from Budleigh Salterton to Ladram Bay following about six miles of the South West Coast Path. Budleigh is the next town along the coast from Exmouth and so we parked the car up in a nearby lane, put the walking boots on and set off to the cliff path.

This part of East Devon is what I would describe as "God's own country" and when the sun is out there is, for me, no finer place on earth to be wandering about.

As we neared the cliffs at the mouth of the River Otter I took some pictures of the beach, river and Budleigh Salterton a former Roman settlement where salt was gathered, hence the town's name. 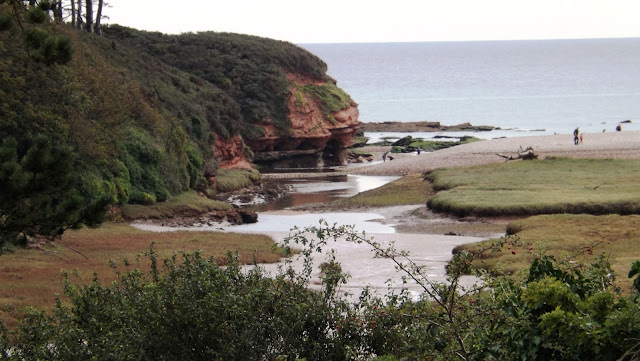 This part of the country, on the south coast was right on the front line in WWII and with northern France over the horizon fears of a German invasion in 1940 caused lines of bunkers to spring up in many south coast  river and beach areas.

The British General Staff really worried about a German landing this far to the west and a major stop line that still has anti tank gun bunkers in place is just a little way along from here at Axminster in the valley of the River Axe. 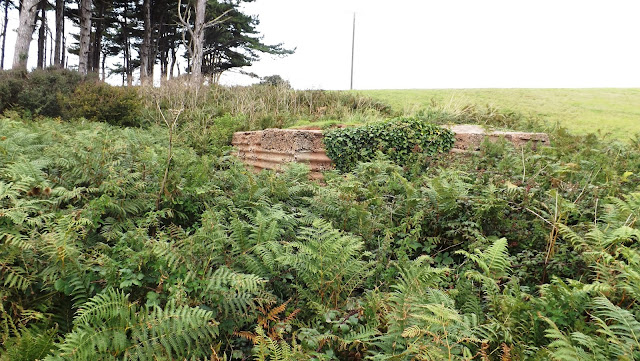 The machine gun bunker now covered in undergrowth, seen above was mirrored by a similar construction at the opposite end of the shingle bank seen in the picture below with Budleigh in the background. I remember reading the wartime diary of Field Marshal Lord Alanbrooke, which makes fascinating reading if you haven't read it, when he described, on taking up his role as Chief of the Imperial General Staff, his concerns with the readiness of the defences he found and the suitability of certain commanders.

On the 10th July 1940 he wrote about visiting defences like these in the Exeter area,
"Left here 9.15. Motored to Frome where I visited 144 Inf Bde, then lunched Honiton with Barney at Bloomfield's where we had as good a meal as usual. Met Green SW area in Exeter at 2.30 pm and interviewed Fitzgerald. Then moved to Totnes where I saw 90th Inf Bde and looked at beach defence, much more work and drive required. Finally arrived Admiralty House at 8 pm and discussed defence problem with Admiral Nasmith (C in C Plymouth and Western Approaches) after dinner. From what I have seen I am not happy at the state of the defences in these parts, people have not yet realized the danger of attack."

Two days later on the 12th July he wrote,
"This was supposed to be probable day of invasion! Spent the day in the office mainly occupied in writing a letter asking for Green to be relieved of the command of the South Western Area. He is too old and lacking in drive ever to make a job of the defence of Devon and Cornwall."

This and the other old bunkers that litter this part of the country are, together with Alan Booke's diary entries, reminders of the serious threat the country faced seventy five years ago.

As we proceeded out along the cliff path towards Ladram I took the time to enjoy another passion, which I share with Lord Alanbrook, and to photograph the wildlife on the waters-edge and in the fields. As well as the stunning cliff and coast line along this part of Devon and its listing as a World Heritage site now known as the Jurassic Coast; if you take the time to look there is plenty of wildlife to see.

As we walked further on over the cliffs the view inland soon catches the eye with Devon's rolling hills and valleys showing how the area got it's Celtic name, Devon which means just that "hills and valleys". 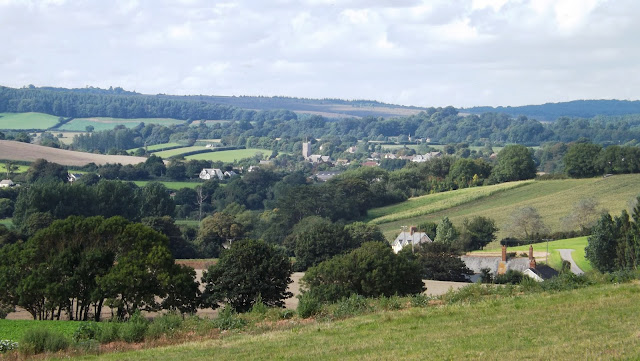 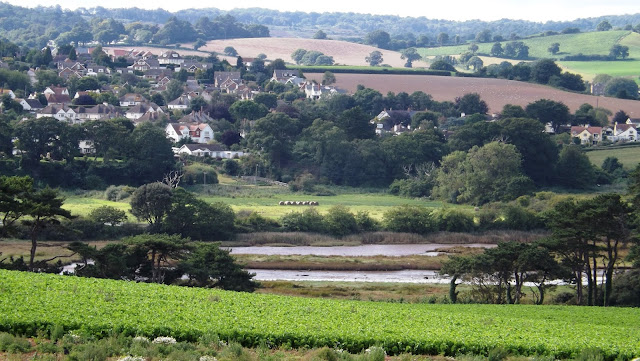 As we moved further on through rolling farmland a flashing forked winged bird shot across the pasture ahead and then landed on a far off hay bale. It seemed very nervous and aware of our presence as I slowly edged into the stubble and managed to get a maximum telephoto shot of a kestral.


At about the half way point of our walk we came upon a roofless construction with a balcony facing out to sea made of that classic concrete seen on buildings on WWII airfields. However this cliff path was not traversing an airfield.

The notice board on the front wall explained the history of this WWII air gunnery observation post and how the sea bed in the bay opposite ended up becoming littered with spent shell cases from RAF gunnery tests including new marks of Spitfires, Hurricanes and Typhoons as RAF aircraft started to up-arm from .303 machine guns to 20mm and sometimes 40mm cannon followed by rockets prior to the Normandy landings. 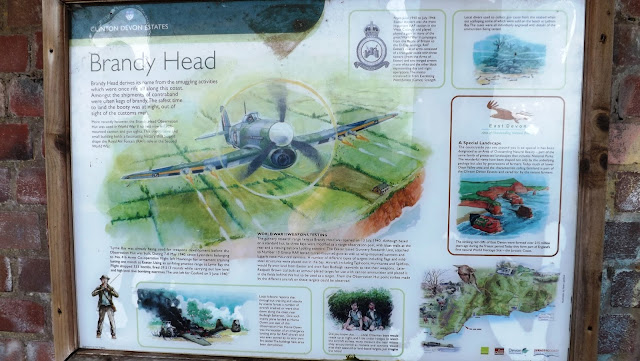 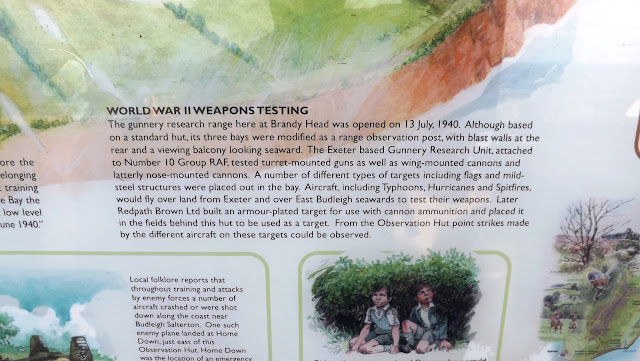 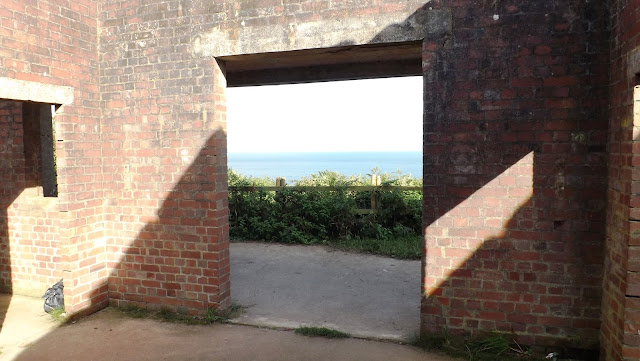 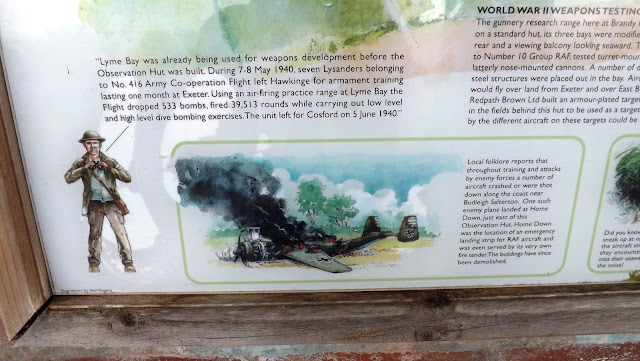 From Brandy Head the path soon took a distinct downward path as Ladram Bay and the thought of a refreshing cup of tea came into view. After a two hour walk with stops to take pictures we were certainly ready for refreshments before starting the walk back to the car.

The walk back seemed to go much quicker and having grabbed my pictures on the way out had less stops. Not only that, but I was up for cooking dinner so wanted to get back to get started in good time.

This time of year is when the wild geese move onto the local estuaries to winter here in the south west and seeing their V shaped flight formations becomes a common sight, particularly at dusk as the birds, like these Canada Geese, move up from the water onto the open fields to roost and congregate in numbers. I was really pleased with the picture below showing them gathering as more groups came in on final approach to the field above where we parked the car. 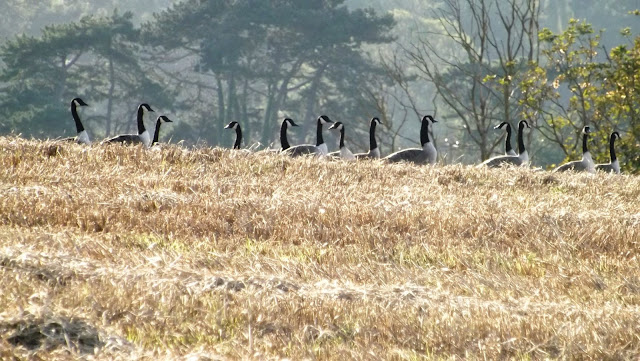 As you can see the weather was gorgeous and with the days getting shorter and cooler we certainly made the most of a very pleasant afternoon walk.
Posted by carojon at 00:20