The Ever Open Eye - B.D. Wilson 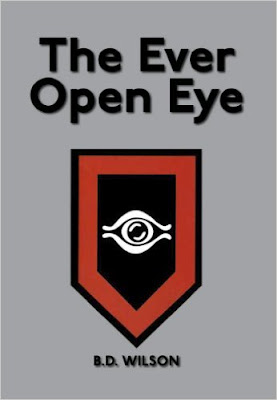 Perhaps like many children of parents who served in World War II I find, especially as I grow older, a growing interest to understand more about the experiences they went through; especially after having experienced all the emotions and feelings of the age they were then, but with perspective that being older brings.

In addition that generation were renowned for not talking too much about their experiences, many happy to forget and move on to what they hoped for, and a better period in their lives, bringing up families and helping to build a better world.

I have treasured memories of conversations with both my parents and indeed other family members who served during World War II but am always on the look out for other references that help to shed yet more light on what was an incredible time in world history.

I have many accounts and books covering World War II and quite a few covering the experiences of British veterans from most of the theatres, but have only three covering Guards Armoured Division (GAD), particularly.

The Divisional History was purchased in a second hand bookshop quite a few years ago now and is the basic tome that anyone interested in the activities of the division needs to read. In addition I still have my old Osprey Vanguard 9 title covering the history of the GAD by John Sandars. Alongside those histories, I have the personal reminiscences of Robert Boscawen's "Armoured Guardsmen" who served with the armoured 1st Battalion, Coldstream Guards.

So it was a pleasant surprise to discover a memoir by Brian Wilson, recently published in 2014, covering similar ground, but this time from the infantryman's perspective, being a former officer in the 3rd Battalion, Irish Guards.

"The Ever Open Eye", the title for the book, references the Guards Armoured Divisional badge of the white eye on blue shield with a red border, designed by the artist Rex Whistler, who served with the division and was killed in Normandy.

The badge was worn as a sleeve emblem by all ranks and as a vehicle sign on the left front and rear of all vehicles.

The book is described by the author in his preface as "an account of a brief undistinguished part played as an infantrymen in North-West Europe in World War II. There are no heroics, no famous battles, and even less of the stirring exploits that enliven more dramatic stories. Instead it tries to portray the day to day life of an infantry platoon commander in the Guards Armoured Division...."

I don't think you should be taken in by this typically understated description common to many of the veterans of this era and with this, Brian Wilson's, account of his and his soldiers adventures as they spearheaded 21st Army's pursuit of the German forces out of France into the Netherlands, where his war was brought short by a very serious injury that had him back in "Blighty"before the Arnhem campaign had concluded.

He took the time to record his adventures early in 1945 as he focused on his recovery and the detail of that account served as the foundation to the book written so many years later.

The book follows a time line of events starting with the authors stalled final higher education, completing two terms at Oxford studying law and thus ensuring him a place to continue his studies post war, leaving in the summer of 1943 to join the army, attracted to the Irish Guards with both his parents hailing from Dublin.

Officer and basic training are covered with the young subaltern having to learn everything from basic soldiering, weapons skills and man management, to use the modern parlance; capped off with the typically British regimental peculiarities and customs which in the Irish Guards meant that second lieutenants were ignored in the officers mess until their first six months were up and they made lieutenant. This was a custom developed to instill in the young officers, many of whom were the sons of very important people, awareness that in the army it was military and not social rank that counted.

The book then plunges off into the war in Europe with the GAD joining the allied forces in Normandy in July 1944 and the young Lieutenant Wilson eventually joining the 3rd Irish Guards in a field close to the village of St Charles de Percy in reserve after being in battle the previous day. The cost to the battalion included the loss of the 2IC of No. 2 Company and their second platoon commander and so Wilson became the new second platoon CO and was soon in action in his first attack at Sourdeval. 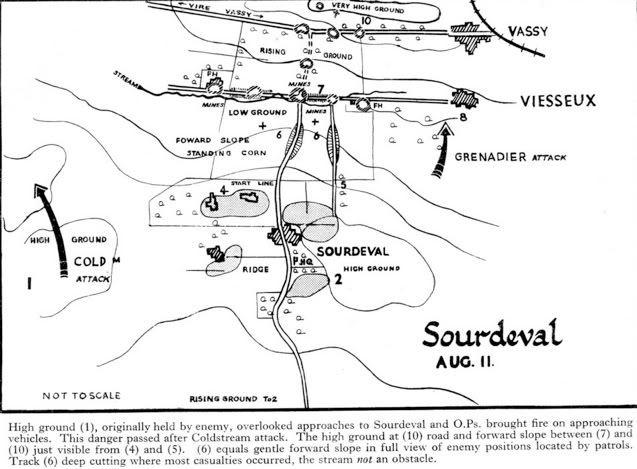 What follows is a description of the plan of attack and how the plan soon changed on first contact with the enemy, providing a painful learning opportunity, with the added pain of finding out that the Monmouth and Norfolk battalion had put in a similar attack just previously and had suffered a similarly bloody repulse. The attack left Wilson with just four men from his original command and the overall losses to the battalion forced the amalgamation of two companies to provide the author with a full strength platoon. Twenty eight men were killed and sixty six wounded and Wilson never saw a German the whole of that day.

As well as the battle description and the sights and sounds of war, the human aspects are also covered in the descriptions of the daily interactions with the civilians encountered on the route through France, Belgium and Holland.

I know what an impression the welcome the GAD received from the liberated towns and cities they entered and that it left a life long memory on the soldiers, particularly in Brussels, which my Dad often talked about and where he returned post war to meet with the family that put him up during his brief stay in the city. The pictures I have of him in Eindhoven on the run up to Arnhem showed the welcome the British troops received, but I was particularly interested to read Wilson's description of the overwhelming enthusiasm, that seemed to provide the sound to the black and white pictures of the event some of which I first used when I covered the day describing Dad's War.

Brian Wilson's description of the drive into Eindhoven;

"It was the people of Eindhoven that really moved us. As they heard the approaching rumble of tanks, they poured forth in their thousands, shouting and yelling with joy. At first, we roared back lustily, blowing kisses. But the noise became so terrific that it was impossible to hear yourself speak. Above the clatter of tank tracks, the crowds screamed and bellowed. The long street was packed with people, jostling, pushing, waving, hysterical with happiness. Above their heads was a moving sea of waving handkerchiefs, hats, hands, little flags, streamers. No football crowd was ever like this, and I don't suppose any of us will ever see its like again. From windows and roofs, flags hung down, people leaned perilously out, their mouths moving, but inaudible."

"Down the centre of the street ran a narrow clear lane bordered by a heaving mass of people that swelled out in the gaps between tanks and contracted before the next tank approached. The crowds were so close that we could lean down and touch the waving hands. It was a marvel that the tank drivers, down to a snail's pace, managed to keep so straight a path without running over anyone. Little boys leaned out from the lower levels of the crowed and occasionally darted across the road to debatable safety."

It was just after the fall of Nijmegan to the Grenadier Guards that Wilson suffered his wounding, that led to his eventual repatriation and a long painful road to recovery. I was really interested to read about his experience of the medical services and the lumps of shrapnel that were left in place to be carried for the rest of his days. My Dad carried two grey shadows under the skin of one of his calf muscles, the shrapnel,  possibly remains of the mortar bomb that blinded and eventually killed the much loved CO of his tank.

I know from my Dad and the other members of GAD I have spoken to all felt that the Arnhem campaign could have ended quite differently and their frustration at falling short was clear to hear from their accounts of the bitter fighting up the narrow road to Nijmegan and beyond. Brian Wilson concludes his book by looking at what he considered were some of the key failings in the higher commanders and their decisions that effectively caused the failure of the mission. I cannot say I was surprised and they all had a compelling logic that probably doomed the mission from the start.

This is not a long book, just short of two-hundred pages, with six photographs pertinent to the text, with one very good view of the sunken lane at Sourdeval where the Irish Guards attack came to grief. There are also three maps, one showing the area of operations in Normandy at the time described, another, the attack plan at Sourdeval and a simple map of the route to Arnhem showing the position of the start point at Joe's Bridge.

I found it very readable and informative and doing what the best of these kind of military memoirs should do, namely to put the reader into the time and events described, without having to be concerned about the bullets and shells. A very welcome addition to the history of Guards Armoured Division.

I picked up my paperback copy from The Book Depository via Amazon for just £4.79