for providing the inspiration for getting on with a little job that I have been meaning to do ever since our test game of Augustus to Aurelian back in January this year.

AtoA is another of those rule sets that uses multiple ranges of dice and factors together with unit specific rules that requires a certain amount of pre game notation.

For our test game I had prepared unit rosters with this information captured, as I had worked out the size of the units which impacts on the number of dice they get to roll and their factors adjusted for unit size.

I soon realised that as most units of the same type were organised similarly, there was no need for a roster and simple unit cards with the the data prepared for reference during the game was all that was required.

So my first efforts prepared with my Dacian Wars collection in mind are as you see them following Shed Wars layout and colour coded system with Red(Roman), Buff(Dacian), Purple(Sarmatian) and Neutral(White - could be used by any faction).

The cards carry information about the weapons and protection the unit has, then details their combat, shooting, morale and training according the AtoA listings and adjusted for unit size. The movement rate in inches and the circular motif showing the size of the unit as L(large), M(medium), S(small) and T(tiny).

The final information at the very bottom identifies in italics any special rules that apply to these troops.

I have always been a bit frustrated when comparing my Warlord Legionaries to their Auxiliary comrades and the fact that Warlord couldn't make their mind up in the early days on the scale of figure they intended to produce.

I had dabbled with the idea of gradually introducing Foundry Roman Legionaries into the collection, but I am now holding fire to check out these tempting little beauties when they roll our from Victrix hopefully quite soon.

Other news on the Dacian Wars front is that I have invested in some Renendra 28mm wattle fencing sections to allow for deployment of those annoying (Roman perspective), 'defensive works in a narrow valley' set ups that Dacian commanders were want to prepare to block and frustrate Roman movements towards their strongholds. 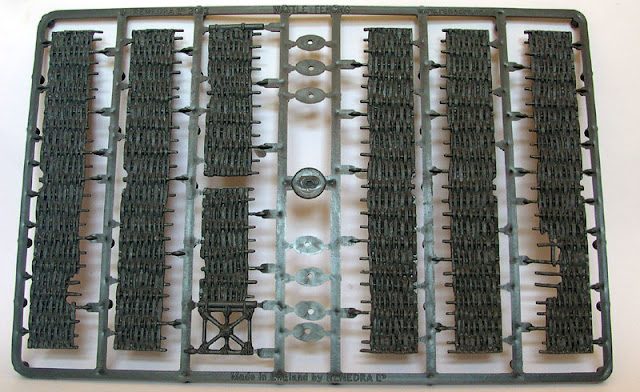 And finally one other idea that has crept into the mix is a plan to play test a new way of determining initiative in AtoA as an alternative to cards but maintaining the unpredictability together with the ability to command the initiative as per the Carpe Diem mechanic, I want to stay unspecific about this until I've had a chance to play test it with Mr Steve, but I am quite excited about its potential.