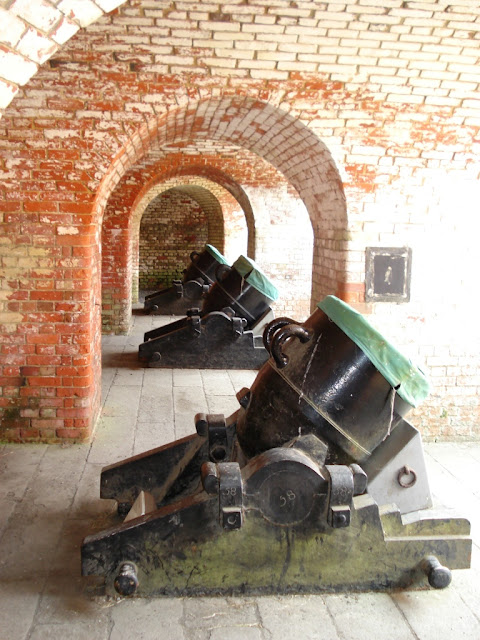 Mr Steve picks up where he left off on his look at some of the interesting weapons in the Royal Artillery museum collection at Fort Nelson, Portsmouth.

The picture above and below are the final ones that show Mortars from my visit to Fort Nelson, in the first one you can see in-situ one of the three batteries making up some of its defensive capability. If being under direct fire from the Ramparts themselves wasn’t trouble enough then these 13 inch Mortar batteries would helpfully lob indirect fire at you at the same time. A three Mortar battery was located on each side of the fort and they were placed in their own earth covered vaulted chambers; shafts behind them were designed to let the smoke disperse, although you do wonder how effective
that would have been.

I have added a link to a very helpful page which gives much more details on these mortars (see PDF at the bottom of the article).

However it is very likely that by the time it came around for Fort Nelson to be fitted with its Mortars, military opinion had changed somewhat on their usefulness.

“The mortar batteries at Fort Nelson were not fitted with their mortars due to the fact that they were considered obsolete by the time Fort Nelson was finished. Also the crews found it difficult to observe the fall of their shot and had to rely upon messages sent down from the main ramparts before adjusting the charges to alter the range of the mortar. The mortars were superseded by howitzers that were placed in a more favourable position on the main ramparts. “(www.victorianforts.co.uk)

“The Portsdown Hill Forts were originally designed for a total of 40 13-inch mortars, with nine at Fort Nelson in three batteries. However, Fort Nelson was never fitted with them, due to the reverberation around the battery in firing, and the introduction in 1883 of the more accurate 6.6-inch Howitzer.” (www.royalarmouries.org)

This concussion/vibration effect of firing them in such an enclosed space was very discomfiting to the crew; these mortars in my picture do still get fired and this effect has been confirmed by the modern day volunteers even when using the much reduced charges that such demonstrations use. (The latest firing was 13th May 2016)

My second picture is of a selection of Coehorn Mortars, unfortunately I cannot tell you the calibres as I am afraid that I didn’t cotton onto the fact that I should also be taking a photo of the accompanying description plate until I was almost half way around. 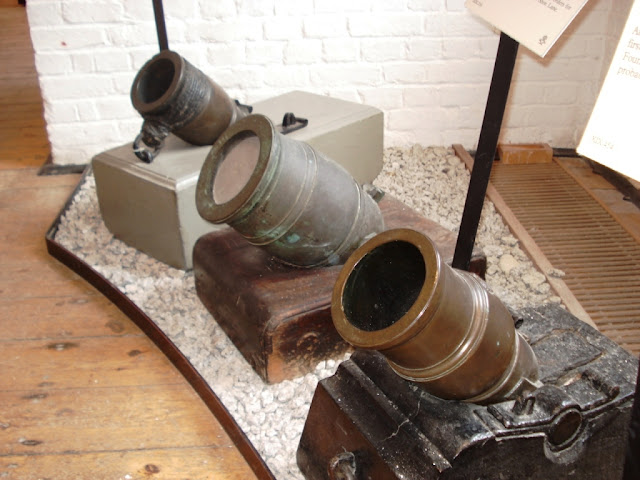 They were invented by a Dutch officer in the 17th c, who was fortuitously called van Coehoorn*, however Coehorn Mortars have always been something of a puzzle to me, let’s face it, it’s just a small block of wood with a stumpy barrel fitted into it, how dangerous can it be?

And yet most armies had them, starting in 1674 at the siege of Grave and continuing on well into the mid nineteenth Century. Whilst researching this weapon I was staggered to learn that it was actually aimed!

“Aiming was a basic procedure. The gun layer stood behind the mortar with a plumb line and would direct the gunners to move the base until the plumb line and the centreline of the barrel were in line with the intended target. “
The Coehorn Mortar by Ian Balestrino

The British army used it extensively in 2.5, 3.5 and 4.5 inch versions. I suspect that the ones in the picture are of these sizes

According to Historic Scotland , the first known use of coehorn mortars in battle by the British Army was at the Battle of Glenshiel in 1719 ( not one I have heard of)

“The Battle of Glenshiel was a battle in the West Highlands of Scotland on 10 June 1719, between British government troops (mostly Scots) and an alliance of Jacobites and Spanish resulting in a victory for the government forces. It was the last close engagement of British and foreign troops in Great Britain. The Battle of Glen Shiel is sometimes considered an extension of the Jocobite Rising of 1715, but is more correctly a separate rebellion and was the only rising to be extinguished by a single
military action..” Wikipedia

Don’t bother to write in if this is wrong and they were used early, I have already lost interest.

This seems to be a pattern, perhaps it was seen as an anti-scot weapon?

Still they seem very popular and every army had to have some, Coehorns were still being used in the American Civil War by both sides although by now they were a little more advanced, but not much

“The US Army had a 24-pounder brass Coehorn that weighed 164 pounds, or 296 pounds when mounted on its four-handled oak mortar bed. Two men could move this mortar, but four men could better manoeuvre and rush this mortar into position in unprepared locations. Explosive shells could be lobbed into masked targets from 50 to 1,200 yards with the Coehorn.

Although the Model 1841 24 pdr. Coehorn is the most widely used on the Union side, the Confederate army did cast and use Iron 12 pdr. Coehorns, with a bore of 4.62 inches, as well as Iron 24 pdrs. As the war progressed, trench warfare became quite common, and mortars were found to be increasingly useful.

I guess by this time we are seeing what would eventually become the trench mortar in WW1 and this I think also answers my initial question at the beginning of this piece of why would anyone want this thing ?

Besides its many siege related use’s it’s also the first man-portable squad mortar.

And finally I have just come across them again in my latest bedtime reading, this time being used by the Russians against the Turks in 1773; I suppose I need to re consider my opinion of these stubby little guns.
Posted by carojon at 10:39