Continuing the series of posts looking at battlefields in Devon, Carolyn and I took some time out over the May Bank Holiday to go and explore the Saxon town of Lydford on the north west corner of Dartmoor; probably more famous for the local Lydford Gorge that attracts holiday makers to this part of Devon each year than the Viking/Saxon battle that was fought here in 997AD.


In 997 the King of Wessex was Aethelred the Unready which gives a bit of a clue as to how good a king this chap was. The 'unready' bit would better translate from the Anglo-Saxon into 'bad-council', but either way poor old Aethelred doesn't score high in the charts of great Anglo-Saxon kings.

Following a comparatively peaceful interval in the mid tenth century after King Edgar, Aethelred's father's conquest of the former Danelaw territory, the English coastline once again became the target of Viking raiders in 980 with Devon and Cornwall being directly attacked in 981 and again later in 988 when it is recorded that the Vikings were brought to battle by the Thegns of Devon.

In August 991 events took another twist with the Saxon defeat by a large Viking force at the Battle of Maldon in Essex and later that year Aethelred agreed to paying 10,000 pounds of gold as tribute to buy off the raiders.

The attempt at paying the protection monies and the apparent weakness of Aethelred's regime only seems to have encouraged the Vikings to push for more easy pickings and the raids continued into the late 900's despite various treaties and payments.

Thus it was in 997 that the Vikings returned to Devon in late summer, possibly led by Swein Harroldson using their classic strategy of swift fast movement inland, to gather as much plunder and booty as they could before dashing back to their boats before they could be intercepted by the local militia or fyrd who would be summoned to the defence.

The Danes landed in the Tamar valley on the county border between Devon and Cornwall catching the locals along the river by surprise and pillaging the length of the valley with all its summer crops and fattening livestock, as they made their way inland.

The defences against this kind of attack was based on those established a century earlier by Alfred the Great and as soon as the alarm was raised villagers began to abandon their homes moving their livestock and goods toward the nearest fortified town or burgh as it was known. The burgh protecting the Tamar Valley was Lydford. 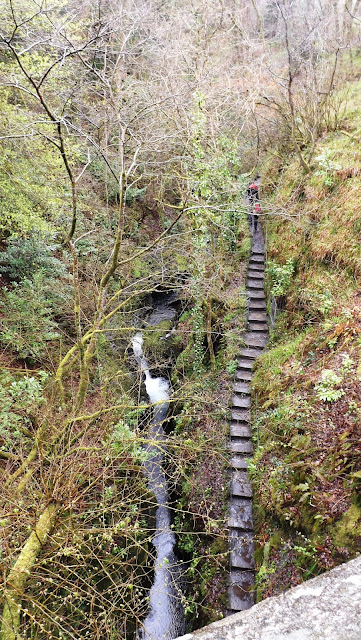 The town of Lydford is positioned on a steep sided hill beside the River Lyd and another small tributary. The two sides of the hill down to the two water courses are sheer and steep, forming a natural barrier to attack and with the third side covered by a steep earth embankment and ditch topped by a wooden rampart, Lydford was a formidable fortress.

By the time the Vikings arrived before the town defences, it was crammed with refugees and the wall was bristling with fyrd armed and ready to defend it.

The Viking host is thought to have numbered around 4,000 men which would have been a large force at the time, and even allowing for men left behind to guard the boats in the Tamar Valley, it is quite reasonable to assume a force of around 3,000 men lined up before the Lydford defences.

As well as its Viking battle, Lydford can boast a display of archaeology that covers the early medieval history of England, from the late Anglo Saxon period through to the Norman occupation and the establishment of the new Norman aristocracy.

A classic example greets the visitor at the centre of the town with the remains of Lydford Castle or as it should be more correctly referred to, Lydford Court House and Prison, for which this tower was built in 1195 and later enlarged by Richard, Earl of Cornwall (1209-1272) who was granted the manor of Lydford and the forest of Dartmoor by his brother, King Henry III, in 1238. He added two stories to the building and heaped the earth around it to create the appearance of a motte, turning the lower floor into a dungeon.

The courts were held in the tower to oversee the laws of the Royal Forest of Dartmoor and the Stannaries or tin mining areas in Devon, as the regulations, rights and taxes were closely controlled by the crown.

These taxes generated a lot of wealth for Richard funding his rebuilding project and turning him into the richest man in England able to lend money to his brother King Henry.

The tower served as a prison and courtroom until the 19th century, when the courts and prison moved to Princetown on Dartmoor.

Lydford Castle earned a reputation for rough justice and a terrible place to be imprisoned, as the following poem from 1640 illustrates:
"I oft have heard of Lydford law,
How in the morn they hang and draw,
And sit in judgement after."

And Richard Strode an imprisoned MP described the place in 1510 as
"one of the most annoious, contagious and detestable places wythen this realme."

It seems they valued the deterrence factor of prison in 1510!


Next to the castle is the medieval church that is built on the site of the original Anglo Saxon one and helps to give a reference point to the size and situation of the original Saxon settlement.


Beyond the church in the western corner of the burgh lie the remains of the earliest signs of the arrival of the Normans and it makes sense that they would have quickly identified the town as an excellent place to establish a garrison and head quarters to oversee the local area from.

Along the path towards the Norman ringwork we stooped to admire the replica Viking runestone placed by a more peaceful group of representatives from Scandinavia commemorating the 1000th anniversary of the battle.

The remains of the Norman works were excavated over fifty years ago and the English Heritage map provides a very good plan of the site enhanced by my own position markers to give you an idea where our pictures were taken. 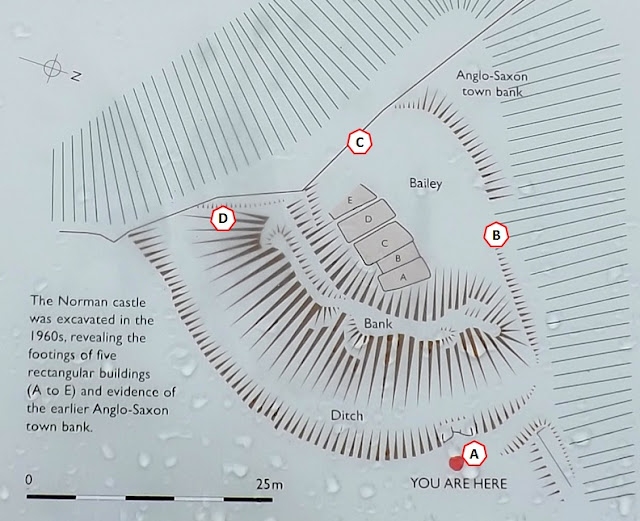 Returning to the battle in 997 AD we recommenced our walk through the town past the very welcoming and suitably named local pub, The Castle Inn, towards the field close to the village hall, in which can be seen the remains of the original Saxon earthen bank that would have been much higher in its day with a six foot deep ditch to its front topped with ten foot high wooden ramparts.


It was in the fields beyond this embankment that the Viking host would have been drawn up determined to break into the fortress before the arrival of the Saxon relief force.

The Viking commander would have much preferred to have taken the town without a fight and so the defenders would have been presented with a noisy intimidating show of force before emissaries would have stepped forward to offer terms with dire threats of what would happen if the Vikings were forced to fight their way in.

It seems that the commander of Lydford was a determined chap as he refused to have any discussions with the Vikings and thus the norsemen were compelled to launch a ferocious frontal attack.

Despite a likely fusillade of javelins and throwing axes followed up by Vikings desperately attempting to get a foothold atop the wall, the attack was beaten off and the invaders concern of being caught inland away from their boats and any chance of escape overcame their desire for the booty and plunder that lay behind the walls of Lydford.


Gathering up their wounded and no doubt making use of the water at the ancient spring just outside the burgh, the Vikings made off down the valley of the River Lyd and to their boats in the Tamar valley.

The restored spring is much as it would have appeared in 997 and is well supplied by clear running water from the peaks of Dartmoor close by.

On their way back to their boats, the Vikings made a quick detour to Tavistock where they burnt the monastery and stole everything of value before making their way down river to its mouth, where they are recorded as setting up a fortified camp on a headland, thought to be Torpoint, near modern day Plymouth.

The Devon Fyrd kept the Vikings under observation but didn't attack and the invaders spent the winter there preparing for the next seasons raiding.


Lydford is a lovely place to visit, not just for the interesting history, but also the natural beauty this part of Devon has to offer, not to mention the cream teas and cakes on offer at the Lydford Gorge teashop.

Sadly the nearby bookshop was lacking in any books on the Vikings at Lydford which is surprising seeing how cool Vikings are today following all their TV shows recently and considering the monuments to the history to be found in the town.


Other Sources consulted in this post
Battlefield Walks Devon - Rupert Mathews
Posted by carojon at 05:04