The Africa Regiment was raised in 1559 appears as sixth in the listing of Spanish regular line regiments that were the core of the Spanish Bourbon army at the start of the Peninsular War.

The Spanish army had been in a prolonged period of decline since the end of the War of Spanish Succession, with only two Cazadore, three line and four foreign regiments raised in the time leading up to the French Revolution.

Manpower for the Spanish army had originally relied on volunteers and when this proved insufficient, foreign battalions were added to the lists, but by 1770 even this provision could not meet the demands for more men and the first drafts of 12,000 men were raised from the Provisional Militia to fill the ranks, later extending to the general population with limited exceptions.

Eventually even conscription proved unworkable as young men fled to the mountains to avoid service and the state reverted to the 'Leva' where marriages of young men within 15 days of conscription were annulled and magistrates were empowered to sweep the streets of beggars, criminals and the unemployed for instant enrolment into the army, with the balance required relied on from popular enlistment.

Needless to say this incoherent and haphazard system left many Spanish infantry regiments understrength and populated with an indifferent kind of soldier that characterised the regular army at the start of the Napoleonic wars.

The regulations for the organisation of infantry regiments from 1802 to 1808 laid down that each regiment should have three battalions, with the first battalion composed of two grenadier and two fusilier companies whilst the second and third battalions were to have four companies of fusiliers.

Each Company was supposed to have 191 men all ranks  and each battalion a theoretical strength of just over 760 men.

The first record I have for the Africa Regiment is this listing of the standing army in May 1808 right at the start of hostilities with France showing a very weak three battalions of average strength 320 men.

Trying to get a handle of Spanish troop movements and strengths at any particular time is always challenging, but this second source of a similar date seems to corroborate how weak the Africa were at the start of the war.

The Africa were involved right from the start with their second battalion listed as part of the reserve division at Baylen on the 19th July 1808 with a strength of 525 men.

The success of Baylen and repatriation of French troops from Portugal found the rejuvenated Spanish army moved up to the River Ebro prior to its rapid re-education as the Emperor led the French Imperial forces back into Spain. The Africa are recorded showing two battalions attached to Castanos' Army of the Centre in La Pena's 4th Division.

The Africa would be with the Army of the Centre under its various commanders until being ordered to join General Cuesta's Army of Estremadura in the spring of 1809. 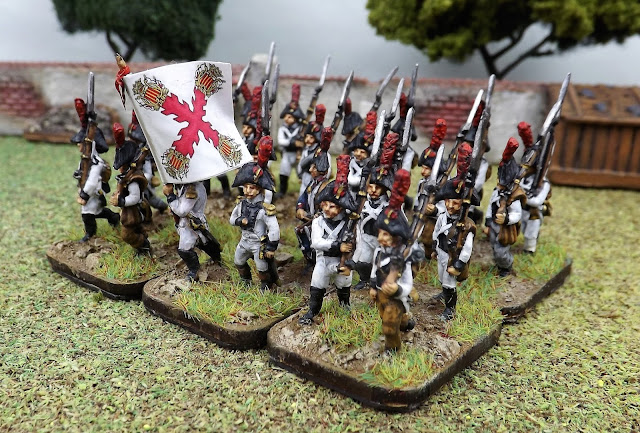 With the fast moving invasion led by Napoleon, Spanish troops reeled back as the French spearhead headed for Madrid whilst secondary forces moved along the south and north coastal areas, forcing Spanish troops to rapidly garrison their fortified cities in an attempt to slow the advance into the interior of the country.  A detachment of the Africa Regiment are recorded in December 1808 at the second siege of Saragossa. 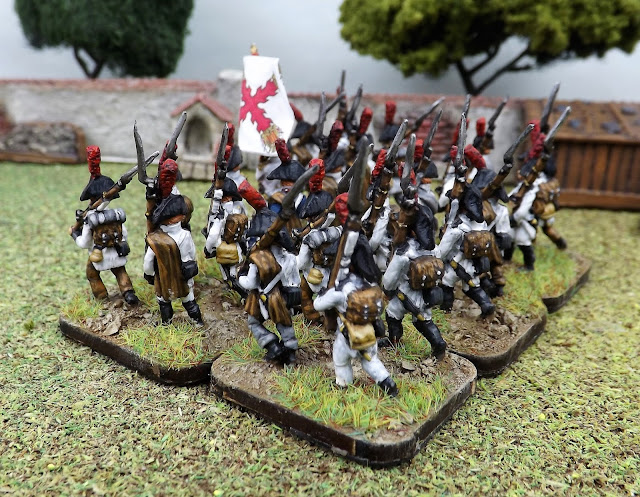 With French troops forcing their way through the Somosierra Pass into Madrid the Spanish forces were given some respite as Napoleon's attention was drawn towards Sir John Moore's rapidly retreating British Expeditionary Force, now falling back to the Galician mountains.

The remains of the Army of the Centre now hovered to the south east and close to Madrid at Cuenca, threatening the French garrison under Marshal Victor. 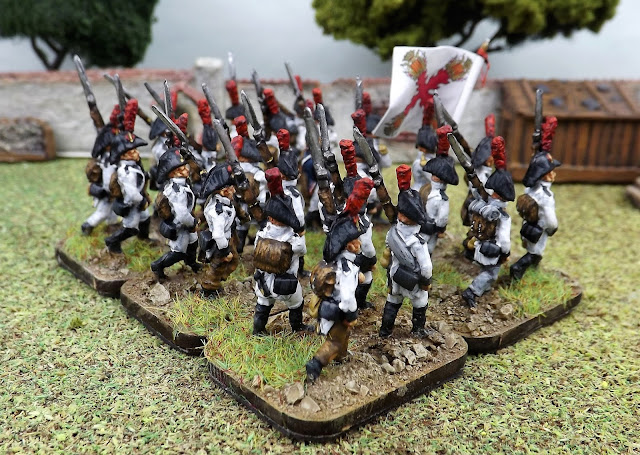 In January 1809, Marshal Victor determined to stamp out the threat posed by the Spanish at Cuenca now commanded by the Duke of Infantado, who now appreciating the Emperor's departure to the north was becoming more emboldened to action.

The French Marshal managed to catch the Vanguard of Infantado's army at Ucles and demonstrating the French abilities to manoeuvre pinned the Spanish to their front whilst turning and enveloping their flanks.

The resulting rout was a disaster for the Spanish resulting in 6,800 casualties and losses from a force of nearly 12,000 men, with the French barely losing 200 men in return.

With the threat to Madrid neutralised Napoleon's brother, King Joseph, entered his capital on the 22nd January for the second time. 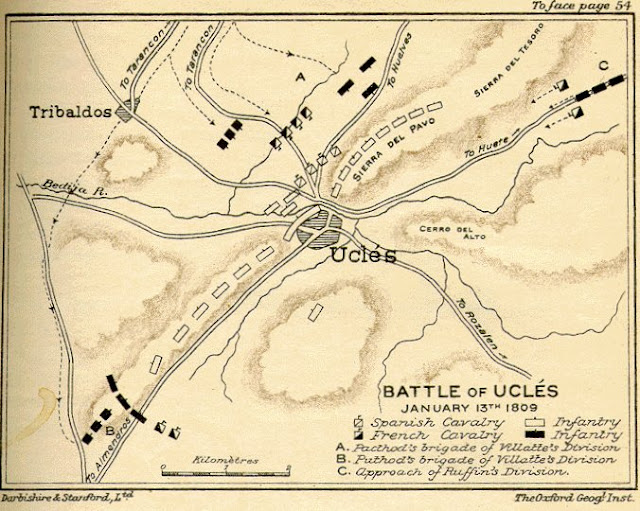 Between the 21st March and the 4th of April the Africa Regiment was ordered to join the Army of Estremadura forming under General Cuesta in and around Badajoz, and this source shows a good strength battalion, recorded as the first, despite the disaster of Ucles only two months previously.

The Africa under Mariscal de Campo de Echevarri are accompanied by several of the units that would line up alongside them in the 5th Division at Talavera.

It would seem that this move meant that they at least missed being involved in another disastrous Spanish battle as Marshal Victor dealt a lesson in battle to General Cuesta at the Battle of Medellin on the 28th March 1809. The Africa and their comrades from the Army of the Centre are notable absentees. 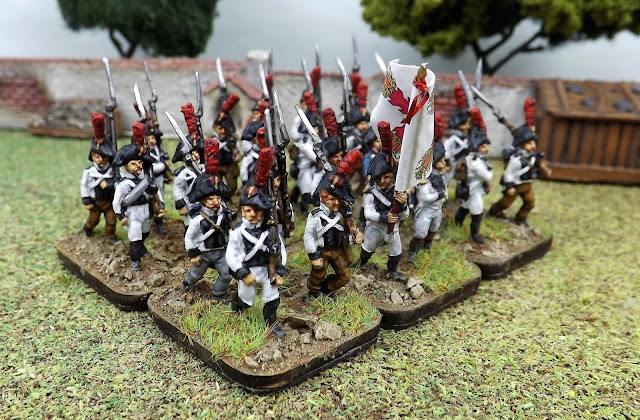 My 3rd Africa are composed of figures from the AB range supplied by Fighting 15's with their Sencilla supplied by GMB Flags.

Next up the first battalion, Reyna (Reina) Regiment.
Posted by carojon at 08:54